Statistical Analysis
The non-parametric Kruskal-Wallis test (α = 0.05) was performed, to prove potential differences between the age groups and the proportion of hyphae elements. Since the dependent variable "age" was not normally distributed, the lowest distribution was ordinarily scaled, and the samples were independent of each other. Due to the sample size of 180 > 30 (critical value), the asymptotic significance value was taken into consideration. Based on the small sample size for trees 15 and 20 years old, these were grouped as category “15-20”. The relationship between the relative proportion of trees infected with mycorrhiza compared to the intensity of mycorrhizae regarding the tree species was analyzed by using the Pearson Chi-square test (α = 0.05) due to nominal scaled parameter of the lowest test variable. All statistical analyses were performed using the open-source software PSPP Version 3.0 (Publisher: Benn Pfaff) under GNU General Public License.
RESULTS AND DISCUSSION
The results showed that AMF is omnipresent in the root structures of the studied agroforestry system and are in symbiosis with all observed tree species regardless of age (Figure 1 and 2). The findings confirm other investigations 29, 30 that mycorrhiza plays a fundamental role in balancing agrosystems and represent an essential link between soil and root. The positive effects on nutrient supply and water transfer as well as the general significance of AMF for ecosystems as already described in various literature 31- 35confirm the high occurrence of arbuscular mycorrhizae in this experiment (Figure 1 and 2) respective to the overall vital health of the trees. The thesis that acidic to neutral soils containing a large number of AM fungi 3 could be confirmed by the average PH value of 5.3 on the areal and the widespread colonization by AMF (Figure 2). Because of the plural anastomosing mycorrhiza net 37, plants of different species can exchange substances and communicate among themselves with organic carbon compounds 38, 39, 40, which can be anticipated based on the uniformly mycorrhization of all examined trees, impartial with respect to their species, plant family (Figure 2) or age (Figure 1). 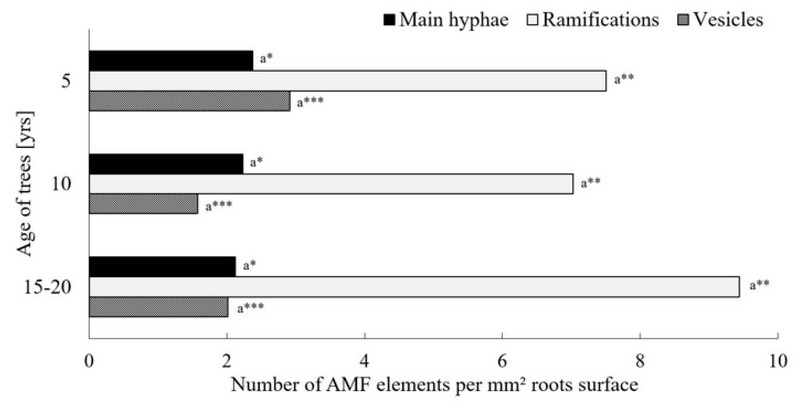 Figure 1. Degree of mycorrhizal growth of all investigated tree species depending on their age examined in Andean agroforestry Mollesnejta during arid dry-season. Toe relevant AMF elements were main hyphae, ramifications, and vesicles. Statistical test with Kruskal-Wallis l\•1ethod and α= 0.05. Due to p= 0,488 > 0,05*, p = 0,388> 0,05** and p= 0,417 > 0,05*** a coherence between tree age and number of each mycorrhizal element could not be couriered.
However, no statistical correlation between the intensity of mycorrhizal growth and age could be established by this experiment (Figure 1). Due to strong scattering of the determined values regarding primary hyphae, ramifications and vesicles, the Kruskal-Wallis test showed no correlation between the two parameters. Only the branching seems to have cumulated slightly, which could be explained by the colonization of further species of mycorrhiza with increasing age of the trees 41. The difference of the ramifications between the 10 and 15 to 20-year-old trees was determined by a separate Kruskal-Wallis test, but also here the results of  p=0.203 over α=0.05, and no difference between the two test factors could be confirmed. Indeed there were differences in the absolute number of mycorrhizal elements in the studied tree species (Figure 2).

Figure 2.  Comparison of absolute arbuscular mycorrhizalization and the relative proportion of trees with arbuscular mycorrhizal fungi depending on tree species and their plant families investigated in the Andean agroforestry Mollesnejta during arid dry season. Elements of AMF were the sum of primary hyphae, branches, and vesicles. The relationship between the total number of mycorrhiza elements and the relative proportion of trees infected with mycorrhiza was tested with Pearson Chi-square and.=0.05. Based on p = 0,314 > 0,05, the relation between the number of counted AMF elements and the relative proportion of A1MF infected trees could be excluded.
In such cases, differences could be observed regarding the tree species and their plant families. On all plant species of the Bignoniaceae family, 100% of the samples were colonized by arbuscular mycorrhizae, which corresponds to other scientific results 19, 42, 43. In comparison to the other examined tree species, Bignoniaceae proved to contain the highest intensity of mycorrhizae elements (Figure 2). On the other hand, the Fabaceae plant family showed significantly lower colonization of AMF in the root cells, while retaining a high proportion of positive colonized samples. This difference between the plant families could be due to the ability of the plant to regulate the overall colonization level, based on altering plant-available nutrition value in the soil 44, 45 or to guarantee an economic output of it's own assimilates 46.
Nevertheless, such assumptions must be confirmed by further investigation upon said tree samples. Predominant and extremely aversive abiotic stressors make the growth and survival of plants more difficult 47, especially as the general low nutrient conditions with an electrical salt conductivity of only 0.27, the seven arid months and the resulting drought stress, as well as the high temperatures during the day in the sun in this case. Since all plants had a vital state of health, the colonization of tree roots by AMF with its water and nutrient-enriching attributes must be considered as a defense against abiotic stressors 5, 48, 49, 50, 51.

Figure 3. Hyphal structure of arbuscular mycorrhizae on the fine root strands of (A) Tecoma stans (15 yrs. old) and (B) Schinus molle (1O yrs. old). Black bar equals 60 tm.
Phosphate is an essential nutrient and limits plant growth 52. Because of the low P2O5 content of 9.339 kg/ha other relevant vectors must introduce phosphorus into the soil or make the current organic phosphorus available to the plants, otherwise sufficient growth of the trees would not be possible. Mycorrhizal fungi have been shown to mineralize organic soil phosphate through the synthesis of phosphatase 53, 54. Similar to phosphate, nitrogen is a major limiting nutrient to plant growth 13, and most of the nitrogen in the soil is only available as ammonium (NH4+)or nitrate (NO3-). Ammonium is the preferential form of nitrogen absorbed by subjected to a nitrogen deficiency 55, 56, but its concentration is 10 – 1000 times lower than of nitrate, especially in acidic soils like in this experiment 23. Ammonium has minimal mobility in the soil and similar to phosphate, a zone of depletion is formed around the roots. AMF extraradical mycelium can absorb ammonium 57, 58, 59, nitrate 58 and amino acids 60. It can, therefore, be assumed that the colonization of all tree species by AMF (Figure 2), regardless of the age of the trees (Figure 1), is associated with the compulsion for the plant to obtain nutrients from the soil and thus to enter into a symbiosis with the fungi.
CONCLUSION
The intensity of mycorrhizal variation across all investigated parameters did not differ between the three age groups. The results indicate that in nutrient-limited, semi-arid, subtropical, dynamic agroforestry systems arbuscular mycorrhizae are present in symbiosis with all ten examined tree species in the varying intensity of fungal hyphae structure. Furthermore, it would be interesting to decipher the species of the current AMF by protein sequencing and to investigate which species are beneficial for agroforestry systems concerning growth, age of trees and climatic seasons.
REFERENCES

27.    Ungar B., J. Vögerl, N. Medrano- Mercado, N. Stadler-Kaulich (2019): The importance of mycorrhiza in agroforestry systems for the stability of ecosystems in semi-arid zones and simple quantification of soil fungi - A study at the Mollesnejta research center for Andean Agroforestry in the valley of Cochabamba, Bolivia. Bionatura Conference Series. Revista Bionatura, Ibarra, Humboldt Kolleg Ecuador 2019, 22.02.-24.02.2019, Bionatura Conference Series Vol. 2. No. 1. 2019.