THPC: Total heterotrophic plate count
TCPC: Total coliform plate count
Figure 2: Mean bacterial counts of pork fat and beef fat
Figure 2 shows that pork fat has a higher bacterial load than beef fat. This could be as a result of the physical appearance of pork fat. Pork fat appeared wet with more oil content than beef fat. Research by Abdelwhab 17 revealed that beef fat had lesser fat content than mutton fat. This slimy nature of pork fat could be the reason behind its higher number of microbial load. Aymerich et al. 18 identified that meat with aw between 0.94-0.99 promoted microbial growth. Also, pork fat might have higher nutrients than beef fats, which makes microorganisms thrive more in it. Lulietto et al. 19 stated that meat has high protein, lipids, minerals, and vitamin contents but low carbohydrate content, which allows some organisms to survive. Nychas et al. 20 recorded that meat spoilage results from some available substrates such as glucose, lactic acid, nitrogenous compounds, and free amino acids present in the meat.
Four bacterial isolates were identified from this study, and they are Pseudomonas aeruginosa, E. coli, Salmonella sp., and Proteus sp. Odey 16 isolated seven bacterial isolates, and they include Staphylococcus spp., Streptococcus spp., Escherichia coli, Salmonella spp., Bacillus spp., Pseudomonas sp., and Proteus sp. The microbial counts from nutrient agar from their sample was from 1.4 x 105 cfu/g to 3.5 x 105 cfu/g. Lamb 21 identified Samonella sp. in all fat and oil samples, including beef tallow and pig lard. Shaffer 22 stated that the common bacterial contaminants in Pork are E. coli, Salmonella sp., S. aureus, and Yersinia enterocolitica and that the intrinsic properties of meat, such as pH and moisture promotes microbial growth, and also does the extrinsic factor such as temperature.
Results from percentage occurrence showed that E. coli and Samonella sp., highly occurred in both samples, Pseudomonas sp. and Proteus followed this sp., which were more in pork fat than beef fat.  Yannick et al. 8 recorded 81.8% for Staphyloccocus aureus, 72.7% for Klebsiella pneumonia, 54.4% for Escherichia coli, 45.4% for Salmonella spp., 27% for Proteus vulgaris, and 9% for Shigella spp. Figure 3 is a representation of the percentage occurrence of both fats. 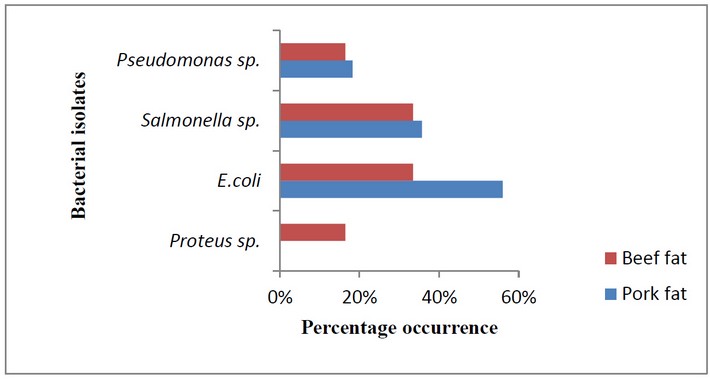 It could be possible that after processing these fats that the bacterial load of these fats will reduce as a result of heating or other techniques used on it. It could also be possible that the microorganisms in these fats are also released into the environment when dumped. When deposited as wastes into the environment, these fats begin to decay and release an offensive odor. The odor released could result from the action of the microorganisms already present in the fat, which most times begin the degradation process or the action of other microorganisms that find the fat as a source of energy. The delicate nature of these fats may have contributed to the easy access of these microorganisms, which, when broken down, will lead to more fat-loving microorganisms inhabiting these fats.
Environmental factors such as sunlight and rainfall further promote the migration of the degraded fats, and this could be beneficial or harmful depending on their quantity in the environment. When these facts are washed in small quantities into the environment, it is tolerated, but when in large quantities, they will either compete or work in synergy with the existing nutrients in such an environment. The oil released by these fats covers the surface (water or soil) they occupy, thereby preventing such environment and the microorganisms in the environment from getting the essential nutrients needed for their growth. This might be the reason for the awful odor given out by these wastes (fats). These decaying fats could trigger the degradation of other materials in the environment. The dumped fats and other wastes are not a sight to behold as it makes the environment look unhealthy. Ifeoluwa 23 stated that solid wastes lead to soil, air, and water contamination, which creates health challenges and is a significant problem to man and its environment, especially those who live closer to areas where these wastes release offensive odors a result of decay.