×
Go to content
INVESTIGATION / RESEARCH
Previous / Index/ Next
This is an early access version, the complete PDF, HTML, and XML versions will be available soon.
mRNA level of genes related to apoptosis in a colitis model in rats treated with epidermal growth factor 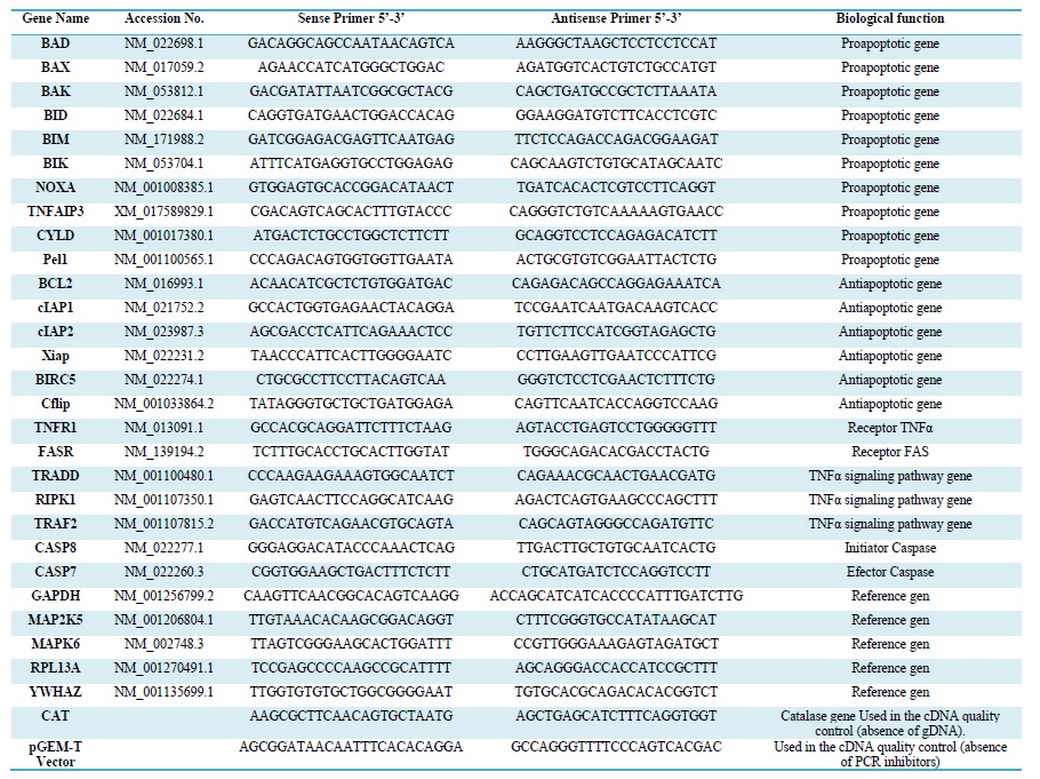 Table 1. Sequence of primers used in the qPCR analysis
B) Verification by qPCR of the absence of inhibitors in the cDNAs
The qPCRs were performed for the amplification of a calibrator (pGEM-T Vector), using specific primers. The reaction was prepared in a final volume of 20 µL, with 2 µL of cDNA(1:25) or H2O, and 18 µL of a mix, containg10 µL of LightCycler  480 SYBR Green I Master 2x, 8 µL of pGEM-T Vector primer mix(300nM final concentration) and pGEM®-T Vector (2,56 x103 copies per reaction). Negative control reactions were prepared in the same condition, but without adding the pGEM-T Vector.
qPCR and Bioinformatic tool
The Primer3 website application was used to design the qPCR primers with a size of 22 bases, TM= 62 oC, and an average G + C content of 50% (Table 1).18
To determine the RG, the geNorm program was used.19 The housekeeping genes (HSKG) evaluated were: PPIA, MAPK6, MAP2k5, GAPDH YWHAZ, and RPL13A
. The LingReg program (version 11.3, 2009, Amsterdam, Netherlands) was used to estimate the efficiency of qPCR
The qPCR reactions were prepared in a volume of 20 µl, containing 10 µl of the PCR TM Absolute QPCR SYBR Green (Thermo Scientific), 6 µl of primers (70 nM), and 4 µl of cDNA (diluted in a factor of 25).
The reactions were incubated at 95 ° C for 15 min, followed by 40 cycles of 95 ° C for 15 s, 60 ° C for 30 s and 72 ° C for 30 s. On the CapitalBio RT-Cycler001 equipment (CapitalBio Co., Ltd., Beijing, China) and qPCR data analysis was performed using the CapitalBio RT-Cycler Version 2.001 program (CapitalBio Co., Ltd., Beijing, China).
In all cases, qPCR used 3 technical replicas for each biological replica. A total of 23 genes related to apoptosis were evaluated. (Table 1)
The mRNA transcription ratios were calculated using the statistical model "Pair Wise Fixed Reallocation Randomisation Test" implemented in the REST software 2009 v2.0.13 program (Qiagen GmbH, Germany), according to a report by PtaffI et al.; in 2002. For up-regulation, the factor of regulation is equal to the given value in the Randomisation results. In the case of down-regulation, the regulation factor is illustrated as (-1/factor of regulation). Statistically significant changes were considered those associated with a p-value of less than 0.05.15
RESULTS AND DISCUSSIONS
Characterization of DSS-induced Colitis in rats and the histological improvement induced by rhEGF treatment
During treatment with 8% DSS, rats in all groups, except those in group I (colitis control group), experienced clinical signs indicating the presence of Colitis such as diarrhea, rectal bleeding, and weight loss (manuscript in preparation).
After sacrificing the animals, the total histopathological score(THS) of mucosa damage was calculated, as previously described, to confirm that the colitis model was established and secondly: the effect of Pellet-rhEGF on the colonic IE. 20
When comparing THS between group II vs group I, an increase in histological damage was detected, confirming the colitis model's reproduction, comparing groups IV, V, and VI (treated with different doses of rhEGF) vs. group III (treated with placebo), shows the effect of rhEGF, at different doses, on the colon mucosa damage. Group IV (dose of 125μg / capsule/day) did not present significant THS differences concerning group III. However, Groups V and VI (doses of 250 and 500 μg / capsule/day, respectively) did show a significant decrease in histological damage, concerning group III, indicating an improvement of the colon mucosa damage. Additionally, no significant differences were observed between the doses of 250 and 500 μg / capsule/day; therefore, both groups were united to determine the differential transcription profile of genes between the treated group responding to pellet-rhEGF vs. the placebo group.21
Diferential transcription study
Differential transcription studies by qPCR require a rigorous control in each step of the process, such as the Quality Control of the extracted RNA sand of the synthesized cDNAs, as well as a normalization of the qPCR with RG that ensures that the variation of the levels of mRNA found to respond to real variations in transcription induced by EGF and are not artifacts due to errors made in the workflow. The results of each of these controls are described below:
Quality Control of total RNA purified from distal colon samples
The concentration obtained was in all RNAs greater than 100 ng / µL. The OD 260/280 ratio (protein contamination) was within the established parameters (1.7-2.2). The samples' quality was also examined by microcapillary electrophoresis, whose program established by the Agilent company includes the calculation of the RNA integrity number (RIN). A RIN value greater than 7 was obtained in all RNAs, indicating that they can be used in a qPCR.22 (table 2, fig.1 supplementary) 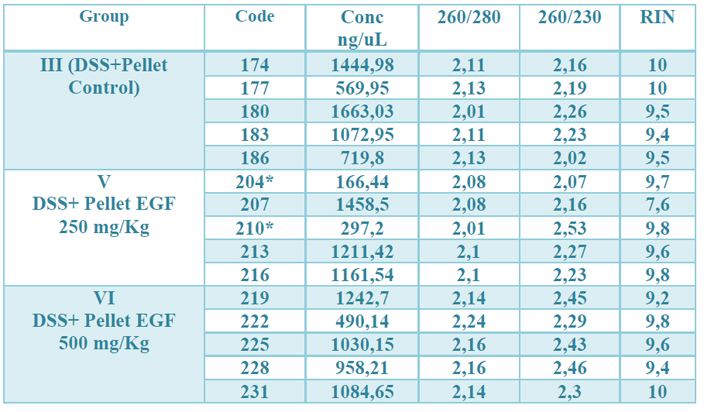 Table 2. Results of the quality control of the total RNA extraction. The observed values correspond, from left to right, to: identification number of the samples, the concentration in ng / µL, the OD 260/280, 260/230 ratio and the RIN value (RNA integrity) of each one. of the samples. * means that for their total amount of RNA, they were depleted in previous studies.
Quality control of cDNA obtained from total RNAs
To standardize qPCR's initial conditions, it is necessary to determine several parameters such as the absence of gDNA and qPCR inhibitors in the synthesized cDNAs.
A)    Verification of absence of gDNA in samples of complementary DNA by qPCR
To verify that the cDNAs met this condition, qPCRs were performed with both RNAs extractions and their corresponding cDNAs, using a set of primers that amplifies a segment of CAT gene. Hybridization of these primers in the same exon of CAT gene makes it possible to efficiently amplify the gene, both in the cDNA samples and the contaminating gDNA, if it exists, obtaining in both cases a product with the same amplification profile. The modular value of the ΔCt was more than 7 in all cases, which ensures that the gDNA if it exists, will not interfere with the Qpcr.23 (table 3, supplementary). 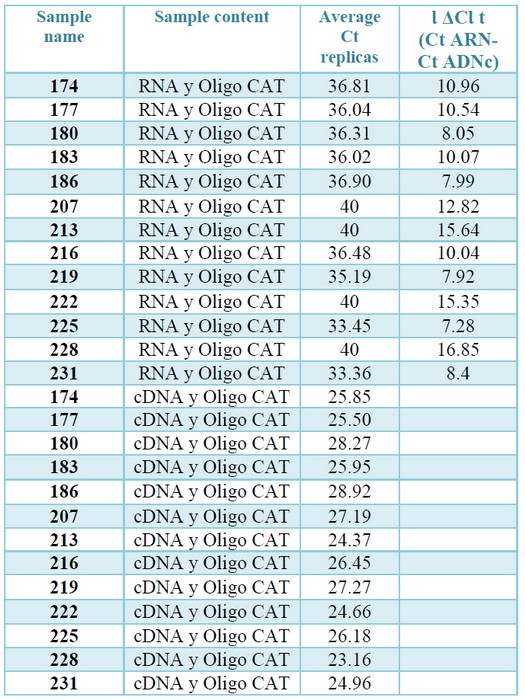 Table 3. Check for absence of gDNA by qPCR. The Ct values correspond to the amplification from the cDNA or from the total RNAs (diluted to a concentration equivalent to that present in the cDNAs) of each sample. The ΔCt are the difference between the average Ct obtained from the replications of the reactions prepared with RNA and the average Ct resulting from the
replications of the reactions prepared with RNA with the corresponding cDNAs.
B) Verification by qPCR of the absence of inhibitors in the cDNAs
To verify the absence of inhibitors in the cDNA samples, qPCRs were performed using a calibrator. The amplification of this calibrator is produced with high efficiency and reproducibility of the Ct values. Therefore, a decrease in the qPCR Ct of the calibrator "contaminated" with cDNA would indicate inhibitors' presence.
The modular value of ΔCt of the reactions containing cDNA (amplification reaction of the pGEM®-T Vector "contaminated" with cDNA) and those containing H2O (amplification reaction of the pGEM®-T Vector "not contaminated") is less than 1 in all cases (table 4, supplementary). Therefore, it can be stated that there is no presence of inhibitors in any of the analyzed cDNAs.23