Israa Abdul Ameer Al-Kraety1, Sddiq Ghani Al-Muhanna2*, Shaima R. Banoon3
Available from:  http://dx.doi.org/10.21931/RB/2021.06.03.21
ABSTRACT
Between September to December 2020, thirteen isolates of Proteus mirabilis were recovered among one hundred fifty; MacConkey agar was utilized to purify Gram-negative bacteria isolated from infections of the urinary tract. The primary identification of Proteus mirabilis isolates was relied on “colonial morphology, microscopic examination, and biochemical “tests; however, the confirmation of identification of antimicrobial susceptibility of isolates was conducted utilizing an automated VITEK-2 compact system. The result showed that Proteus mirabilis isolates were highly resistant to most antibiotics, making them multi-drug resistant (MDR). Phenotype methods were used to detect AmpC beta-lactamase. Initial and confirmatory methods showed that eight isolates were AmpC producers. Polymerase Chain Reaction (PCR) was employed to detect the blaampC gene.
Keywords: Proteus mirabilis, β-lactamase, blaampC, VITEK-2, PCR.
INTRODUCTION
Urinary tract infection (UTI) is a form of infection that affects the urinary tract. Microorganisms infecting or colonizing the urinary tract. The most common bacterial are pathogens in UTIs are P. aeruginosa, S. saprophyticus, E .coli, and P. mirabilis1. Infections of the urinary tract can take place throughout the body. Urinary tract infections, such as cystitis, pyelonephritis, urethritis, prostatitis, and perinephritis2,3,4,5, affect people of all ages and are among the most widespread infectious diseases. Proteus mirabilis represents a Gram-negative bacterium famous for its ability to spread rapidly within a pattern resembling bulls’ eyes. This organism is most commonly a urinary tract pathogen in clinical settings, especially in long-term catheterization patients. P. mirabilis uses urease and stone formation, fimbriae and other adhesives, iron and zinc conquest, proteases and toxins such as hemolysin and its function in pore formation, biofilm formation, and pathogenesis regulation to enter and colonize the host urinary tract6,7. The continuous usage of antibiotics produces the spread of antibiotic impedance and, in particular, to the progress of antibiotic resistance genes in gram-negative organisms, which are considered the most severe medical problems. For P. mirabilis the resistance to antimicrobials is growing8,9, including the resistance to expanded spectrum cephalosporin according to the production of expanded-spectrum β-lactamases (ESBLs) 10. Although antibiotics are so valuable for treating many bacterial diseases, they are considered environmental contaminants in infected animals and humans for a long time38. This study aimed to detect Plasmid-mediated Ampc beta Lactamase Gene in Clinical Isolates of Proteus mirabilis at the molecular level.
METHODS
Sample’s collection and identification
During the study period from September to December 2020, the whole 150 midstream urine samples were obtained. The samples were taken from patients in Al-Najaf province hospitals who had urinary tract infections. Suspected P. mirabilis isolates were retrieved from clinical samples after purification on MacConkey agar and incubated aerobically overnight at 37°C and confirmed by biochemical tests. The definite identification was carried out using Gram-Negative - Identification (GN-ID) cards and VITEK 2 compact devices.
Antibiotic Susceptibility Testing
Using the automated VITEK-2 compact device and AST-N093 cards (bioMérieux, France), the Minimum Inhibitory Concentration (MIC) technique was calculated. This card composed the following antibiotics: Amikacin, Aztreonam, Cefepime, Ceftazidime, Ciprofloxacin, Colistin, Imipenem, Isepamicin, Gentamicin, Meropenem, Minocycline, Pefloxacin, Piperacillin, Piperacillin-Tazobactam, Rifampicin, Ticarcillin, Ticarcillin-Clavulanic acid, Tobramycin, Trimethoprim-Sulfamethoxazole.
Exploring AmpC β-Lactamase
Initial Examination for AmpC β-Lactamase Production
Employing the standard disk diffusion process, all P. mirabilis isolates were checked for cefoxitin susceptibility using cefoxitin disk 30 µg/ml (CLSI, 2019)11. Initially 14mm inhibition zone diameter) were thought to be AmpC lactamase producers 12.
Confirmatory Test for AmpC β-Lactamase Product
To detect plasmid-mediated AmpC B-lactamase, the AmpC disk test was used. The test involves permeabilizing a bacterial cell with Tris-EDTA and releasing β-lactamases into the surrounding medium. AmpC disks (i.e., filter paper disks consisting of Tris-EDTA) were made via immerse sterile filter paper disks with 20 µl of a 1:1 mixture of normal saline and 100X Tris-EDTA, allowing the disks to dry, and storing them at 2 to 8 ˚C. Using the typical disk diffusion process, a lawn of cefoxitin susceptible E. coli ATCC 25922 was spread on the surface of a Mueller-Hinton agar plate (CLSI, 2019). AmpC disks were rehydrated with 20 µl of normal saline immediately before use, and several colonies of each research organism were added to the disk. On the inoculated surface of the Mueller-Hinton agar, a 30 g cefoxitin disk occurred. After that, the inoculated AmpC disk was mounted on top of the antibiotic disk, with the inoculated disk face touching the agar base. After that, the plate was switched over and left to incubate at 37°C in ambient air overnight. After incubation, the plate was inspected, indicating the enzyme inactivation of cefoxitin or lack of distortion, indicating no apparent inactivation of cefoxitin (negative result) for indentation or flattening of the inhibition zone (negative result) 13.
Molecular Identification
The blaampC gene for P.mirabilis was detected using a PCR assay, as shown in Table (2). As shown in Table (1), this primer was developed by Alpha DNA Company in Canada. To estimate the size of the PCR products, 1% agarose gel electrophoresis was used to validate amplified products. The gel was stained with 5 µL of 10 mg/mL ethidium bromide (Promega, USA) and run for 1.5 hours at 85 volts. On an ultraviolet light transilluminator (Cleaver, UK), one band was viewed at the required place; bands were produced employing a gel registration method “Cleaver, UK.” The molecular weights of amplified items were calculated using a 100bp ladder “Bioneer, South Korea” 14.

Table 2. PCR program of ampC gene that applies in the thermocycler
RESULTS AND DISCUSSION
Initial identification of bacterial isolates obtained from clinical samples was based on cultural morphology, microscopic characteristics, and biochemical examinations. The colonial morphology was employed to define the cultural identity of P. mirabilis from those isolates. P. mirabilis colonies are grown on blood agar and nutrient agar swarm in waves, while colonies grown on MacConkey agar15 do not swarm and form smooth colorless colonies, suggesting that P. mirabilis cannot ferment lactose sugar. P. mirabilis was Gram-negative bacilli organized separately, in couples, or short chains under microscopic examination. Table (3) displays the results of biochemical tests used to perform the initial identification of P. mirabilis insulates. The isolates shared oxidase-negative and catalase-positive characteristics in common. They were motile, methyl red, and gelatin liquefication positive for urease, catalase, citrate, urease, and gelatin. The isolates could sour glucose on Kliger iron agar, resulting in (Alkaline) red color on the slant and lower (acidic) yellow color with gas and H2S production 16; oxidase, indole, and vogues-Proskauer were all negative 17,18. 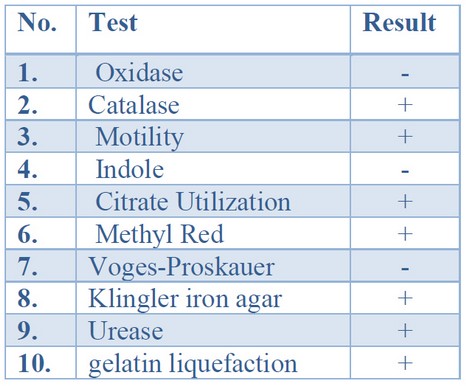 Table 3. Conventional biochemical tests results of P.mirabilis suspected isolates
The automated VITEK-2 compact device was utilized to complete the identification, including 47 biochemical tests and one negative control well on GN-ID cards. The findings show that only thirteen of 150 suspected isolates were emphasized as P.mirabilis, with ID message confidence levels varying from very good to excellent (Eventually from 93% to 99%).
Antibiogram Testing and Minimum Inhibitory Concentration
The automated VITEK-2 compact device was employed to test antibiograms. The analysis findings showed that all P. mirabilis isolates tested were resistant to at least three groups of antibiotics. As a result, all isolates were deemed multi-drug resistant (MDR). The findings showed that (100%) of isolates were resistant to penicillins (piperacillin and ticarcillin), while (64.7%) were resistant to both. Resistance to β-lactam- β-lactamase inhibitor was found in 100% of piperacillin/tazobactam and (47%) of ticarcillin_clavulanic acid moreover resists to ceftazidime, cefepime, and cefoxitin” were identified in (100%), (94.1%) and (64.7%), correspondingly, in the sample. Aztreonam resistance was 100 percent in all isolates. Low resistance was observed in the carbapenem community, which included imipenem and meropenem (the efficient β-lactam antibiotics), with the resistance of (5.9%) for each. This finding was confirmed by 19, who found that P.mirabilis is (97.2%)sensitive to this antimicrobial. Some Proteus mirabilis isolates have reduced resistance to imipenem for various reasons, including the lack of outer film porins, reduced expression of PBP1a, and decreased imipenem combining by PBP2 20. Because of the lack of 24 kDa OMP, Proteus mirabilis has developed resistance to imipenem. Amikacin (70.5%), isepamicin (64.7%), tobramycin (53%), and gentamicin (23.5%) of the aminoglycoside population all had a significant intermediate effect on P.mirabilis insulates. These mechanisms of transmission effectively accelerate the spread of MDR bacteria causing nosocomial outbreaks worldwide 21,22,23. Amikacin represents an aminoglycoside antibiotic that can be used to combat several bacterial infections. It works by interacting with the 30s ribosomal subunit of bacteria, triggering mRNA misreading and preventing the bacterium from synthesizing important proteins for development. This finding agrees with 24, who found that (88.2%) of insulates were resistant to pefloxacin and (64.7%) of isolates were resistant to ciprofloxacin. (76.5%) of insulates were impedance to trimethoprim-sulfamethoxazole, while (94.1%) were impedance to minocycline, 25 observed that all insulates were impedance to both colistin and rifampicin. Susceptibility testing showed that none of the insulates were completely immune or susceptible to any of the antibiotics examined.
Exploring Phenotypic of Plasmid-Mediated AmpC β-Lactamase (PMABL)
Producing insulates phenotypic detection cefoxitin impedance was an initial screening marker for AmpC β -lactamase producers. The basic Kirby-Bauer disk diffusion approach was employed to test P.mirabilis insulates for cefoxitin susceptibility. Cefoxitin zone diameter less than 14 mm yielded Such impedance insulates were classified as AmpC β-lactamase producers, due to the Clinical and Laboratory Standards Institute’s (2019) recommendation. According to the phenotypic data collected in this study, 10 (76.9%) insulates were resistant to cefoxitin, while 2 (15.3%) were intermediate, and 1 (7.6%) was susceptible. The development of AmpC β-lactamase was screened in all isolates using the AmpC disk test, that AmpC producer was found in five (38.4%) of the thirteen isolates with 5 (62.5%) isolates resistant to cefoxitin, 2 (25%) intermediate resistant isolates, and 1 (12.5%) isolate susceptible to cefoxitin (Figure 1). The detection of plasmid-mediated AmpC-lactamases was calculated employing the AmpC disk test. The AmpC disk examination had 100% responsively and 98% mainly for detecting plasmid-mediated AmpC β-lactamases.
On the other hand, the phenotypic data revealed that the whole AmpC positive insulates had previously been identified as cefoxitin resistant26 However, this test was in cefoxitin susceptible, and intermediate resistant insulates not able to demonstrate the possibility of AmpC development. This may be because the AmpC disk test relies on the permeabilization of the cell membrane and the release of β-lactamases into the system. This examination may not identify low-level expression enzymes. According to 27 (22%) of AmpC producers, insulates were susceptible to cefoxitin. The development of amps in these insulates may be according to a mechanism close to that of ESBL production organisms susceptible to ceftazidime when tested using the disc diffusion approach. Cefoxitin impedance in non-producers of AmpC may be following several mechanisms, including a lack of porin permeation 27. Occasionally, rather than AmpC enzyme activity, cefoxitin impedance results from producing several carbapenemases and a few forms of class A β-lactamases 28. 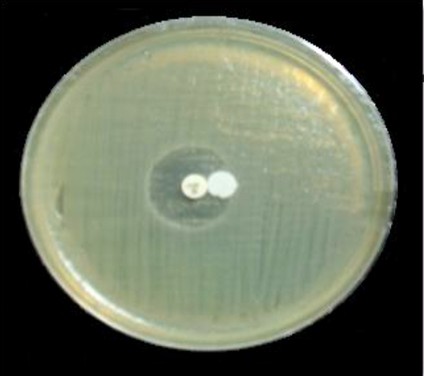 Figure 1.  A positive result of a phenotypic confirmatory test for AmpC
Molecular Exposure of Plasmid-Mediated AmpC β-Lactamase (PMABL) Producing Insulates
The existence of the blaampC gene was investigated in thirteen isolates of P.mirabilis, with the results indicating that only 5 (38.4%) isolates yielded blaampC gene amplification products using specific primers (Table1). The identification of these isolates by PCR is depicted in (Figure 2). Several cellular functions 29,30,31,32. Some Enterobacteriaceae family members such as “Enterobacter, Shigella, Providencia, Citrobacterfreundii, Morganellamorganii, Serratiamarcescens, and Escherichia coli” 33,34,35 have AmpC β-lactamase genes on their chromosomes. As a consequence of this shift, plasmid-mediated ampC-lactamases have arisen. Plasmid-mediated AmpC-lactamases are a novel task since they impart carbapenem tolerance in strains missing outer membrane porins, have cephamycin impedance and are unaffected by commercially available -lactamase inhibitors. This mechanism of resistance has been discovered all over the world and has the potential to cause nosocomial outbreaks. It seems to be increasing, so more research is required to evaluate the best detection and treatment options 37.