The chemical effects of sulfuric acid produced by a sulfuric acid-generating machine include lowering the pH of the water to increase the bioavailability of nutrients in the soil and then be easily absorbed by the plant. This research determined the effect of sulphuric acid produced by the SAG machine on the productivity of the cultivation of roses (Rosa sp.) in the OK Roses S.A. floricultural farm, in Cotopaxi, Ecuador. The research method was descriptive, quantitative, and it had a quasi-experimental design. Primary data collection was obtained from the productivity field records and laboratory analyses of water, soil, and foliage. The results showed that the generation of sulphuric acid produced by the SAG machine lowers the pH and bicarbonates in the water. This process allowed the elements bioavailability from soil to plant like Mg and S and microelements like Fe, Mn, Cu, and Zn. The productivity index stem-plant-1 month-1 increased by 16.16% over two years.
Keyword: roses crop, Rosa sp, sulphuric acid
INTRODUCTION

Roses are the best known and sold flowers in the world. According to some researches, Lamz1, Navarro2, García3, and Food and Agriculture Organization of the United Nations4 salt stress causes physiological and biochemical changes in the metabolism of rose cultivation, conditioning its productivity. For Gardi5 and Xu6 the quality parameters required by the international market for fresh rose have contributed to the accelerated deterioration of the soil-water-plant-environment system, mainly due to the high residuality of acidifying agrochemicals applied to this monoculture; causing compaction, destruction of aggregates, and disappearance of macropores from the first 30 cm of the soil. According to Martínez7, this limits the ionic availability of nutrients, which limits the agronomic efficiency, productivity growth, and profitability of the crop. In the opinion of Sánchez8, soil degradation is also linked to irrigation with sodium bicarbonate groundwater.
Investigations conducted in Morocco by Bourakhouadar9 in alkaline waters and saline/sodium soils concluded that the use of irrigation water treated with a SAG machine (sulphuric acid-generating) produced rapid desalination, and decreased sodium. This improves soil permeability and aggregation, facilitating the leaching of salts. The water that initially had an alkaline pH of 8.4, by SAG machine intervention was reduced to 6.0. The HCO3-bicarbonates decreased from 3.5meq L-1 to 0.95meq L-1. In the same way, Ahmad10 said the barley lots with SAG treated water, and zero tillage increased 19% (Kg/acre) in the yield. Technical records at the OK Roses S.A. flower farm indicated the water of irrigation is alkaline because that exceeds 200 ppm of bicarbonates and pH over 8 points. This condition limits the ionic availability of nutrients and decreases the productivity of stems for export. In this context, this research focused on analyzing the quality of irrigation water with the intervention of the SAG machine, determining the influence of the sulphuric acid produced by the SAG machine on the bioavailability of soil nutrients, and finally, evaluating the productivity of Rosa Freedom cv and Rosa Vendela cv.
METHODS
The floricultural farm is located in the inter-Andean region of Ecuador, Cotopaxi, Latacunga at 2910 meters above sea level. The soil is clay loam. The daily total irrigation sheet is 469.47 m3. The absolute maximum average temperature is 20.3°C. The precipitation annual average is 396.6 mm. The population was represented by the cultivation of Rosa sp. Freedom and Vendela cultivars under the greenhouse with an initial productivity index of 0.76 stem-plant-1 month-1 for the Freedom cv, and 0.89 stem-plant-1 month-1 for the Vendela cv. The total production area was 56200m2. Data for Freedom cv were obtained in block one of 7602m2, and data for Vendela cv were obtained from block six of 4671 m2.
The SAG machine is based on the principle of co-production of sulphuric acid and hydrogen with proportions that are friendly to water, soil, and air. This technology neutralizes waters saturated with mineral-salts, also saline or sodium soils. Buhidar11 explains the physical-chemical process begins with the introduction of alkaline water through a pressurized line that maintains the constant internal pressure into the machine. Then elemental sulfur with a purity of 99.9% is incorporated and burned in a combustion chamber at a temperature above 205 °C. One-tenth of the oxygen-rich water supply is introduced under pressure forward two “venturi.” This process creates a vacuum. The elemental sulfur (S) ignites in the combustion chamber and melts. The molten sulfur is oxidized to create sulfur dioxide (SO2), which spreads down the pipe to mix with water, and it forms sulfurous acid with pH 2 in (Equation I), then sulphuric acid with pH 6.5 in (Equation II). 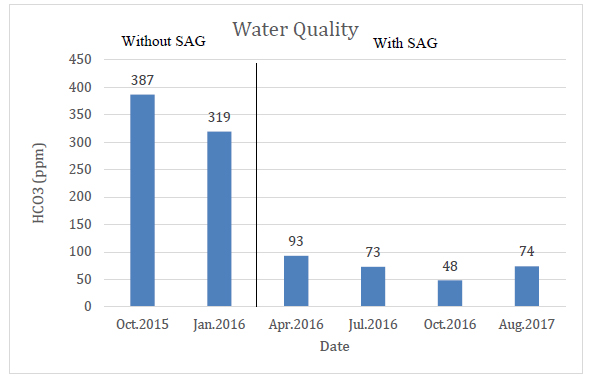 Figure 1. Bicarbonates present in the water before and after of the SAG machine intervention.  Note: Taken from water analyses by AGQ Labs & Technological Services (2015-2017)
Bourakhouadar9 concluded that irrigation with SAG-treated water produced rapid desalination, and sodium decreased. This improved permeability and soil aggregation, which in turn facilitated the leaching of salts. The water initially had an alkaline pH of 8.4, but by the intervention of the SAG machine, it was reduced to 6.0. The E.C. suffered a slight increase from 0.56 to 0.64 dS m-1. The HCO3-bicarbonates initially from 3.5 meq L-1 decreased to 0.95 meq L-1.
Effects on soil
The results indicated that the pH of the root zone (water bulb) at 20 cm from the ground, decreased by 0.24 and 0.25 in blocks one and six in Freedom and Vendela cultivars, respectively. This meant 1.6 times more acid, according to Scott13. In a free soil like it is the case of this farm, “a CE 0.5 mS cm-1 represents an energy consumption of 67.5%, and a CE 1.0 mS cm-1 represents an energy consumption of 80.6%.”14 It decreases in C.E. could indicate a lower energy expenditure of the plant with the installation of the SAG machine, and directly influence productivity rates.
Soil and foliar analyses revealed the nutritional availability that the soil is providing as assimilable to the plant. After the intervention of the SAG machine, the bioavailability of macro and micronutrients were directly reflected in the plant tissue (Table 1).

Table 1. Macro and micronutrients behavior in the soil and ranges of absorption by the plant in Freedom and Vendela cultivars with SAG machine. Note: Taken from the soil and foliar analyses by AGQ Labs & Technological Services (2014-2018)
Effects on plant
The data indicated the concentrations of Mg and S became “Normal” in the plant, which is 0.36% and 0.25% by Freedom cv, and 0.37% and 0.27% by Vendela cv, respectively. In the same way, micronutrients like Fe, Mn, and Cu presented “Normal” concentrations in the Vendela cv, that is, 146.33 mg kg-1, 147.33 mg kg-1, and 7.84 mg kg-1, respectively. These data indicated that the implementation of the SAG machine improves the nutritional balance of the plant, which can be verified in the productivity of the crop.
The results obtained by the Analysis of Variance ADEVA, with the Fisher’s mean test (α=0.05) for the productivity index stem-plant-1 month-1 of Freedom and Vendela cultivars, indicated that the factors “SAG Machine” and “Cultivar” are statistically significant; however, it was not significant for the “Machine: cultivar” interaction.
The analysis for the factor “SAG Machine” (Figure 2) indicated that the mean productivity index stem plant-1 month-1 for both cultivars Freedom and Vendela, reached 0.99, that is, 16.16% more than 0.83 stem-plant-1 month-1 before establishing the SAG machine. So the SAG machine had a positive effect on the productivity index stem-plant-1 month-1 in the cultivation of Rosa sp. According to Aza12 the best productivity index of the Freedom cv in Ecuadorian flower farms is 1.0 stem-plant-1 month-1  with more demanding quality parameters like bud size, vase life, size, and foliage color. 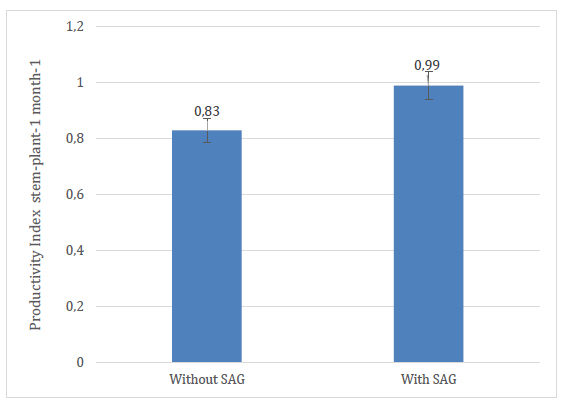 Figure 2. Productivity Index of Freedom and Vendela cultivars with SAG machine.
In Pakistan, Ahmad10 indicated the maximum yield was obtained in the barley lots where it was irrigated exclusively with water treated with SAG machine, and zero tillage. The increase in productivity was 19% and 15%. Soil pH dropped using SAG-treated water, while irrigation with untreated water increased pH.
On the other hand, there was not a statistic effect on the stem-length (S.L.) by use SAG machine.
CONCLUSIONS
The quality of irrigation water for rose cultivation at the OK Roses S.A. flower farm improved in two parameters after using the SAG machine as an alternative means of agricultural production. It lowered the pH from 8.28 to an average of 6.47. It decreased bicarbonates (HCO3) from 319 ppm to an average of 64.77 ppm. The data indicated that the ionic availability of micronutrients like Fe, Mn, and Cu; also, secondary nutrients like Mg and S was improved, which was verified in the increase of productivity indexes of Freedom and Vendela cultivars. The productivity indexes were 0.99 stem-plant-1 month-1, that is, 16.16% more than 0.83 stem-plant-1 month-1 before establishing the SAG machine. Framed in the results, the alternative hypothesis was accepted “The productivity of rose Freedom and Vendela cultivars is greater with the implementation of the SAG machine as an alternative means of production in the Ecuadorian flower farm.”
Acknowledgments
The research was supported by the OK Roses S.A. farm of Ecuador. I thank Professors Ingrid Martínez Ph.D. and Alonso Zuleta Ph.D. for help in the revision of the manuscript for this paper.
REFERENCES
1.      Lamz A, González M. [Salinity as a problem in agriculture: plant improvement an immediate solution]. Tropical Crops [Internet]. Oct-Dec, 2013 [cited 2020 Jan 10]; 34:4, 31-42. Available from: http://scielo.sld.cu/scielo.php?script=sci_arttext&pid=S0258-59362013000400005.
2.      Navarro GG, Navarro GS. Saline and sodium soils. In Agricultural Chemistry: Chemistry of the soil and essential nutrients for plants. 3rd ed. Madrid, Spain: Editions Mundi-Prensa; 2013.
3.      García Á, Correa D. Use of Soil Quality Indicators as a strategy to prevent its degradation. In A. García [Presidency] Soil Fertility and Plant Nutrition. Symposium held at the XII Ecuadorian Congress of Soil Science. Quito, Ecuador; 2010.
4.      Food and Agriculture Organization of the United Nations. Advances in the assessment and monitoring of salinization and status of biosaline agriculture: Report of an expert consultation held in Dubai, United Arab Emirates, 26–29 November 2007. No. 104; 2009.
5.      Gardi C, Angelini M, Barceló S, Comerma J, Cruz C, Encina, A, Jones A, Krasilnikov P, Mendonça ML, Montanarella L, Muñiz O, Schad P, Vara MI, Vargas R, editors. Soil Atlas of Latin America and the Caribbean, European Commission - Publications Office of the European Union, L-2995. Luxembourg; 2014.
6.      Xu RK, Ji GL. Effects of H2SO4 and HNO3 on soil acidification and aluminium speciation in variable and constant charge soils. Water, Air, and Soil Pollution. July 04, 2000; 129: 33-43.
7.      Martínez E, Fuentes J, Acevedo E.  [Soil organic carbon and soil properties]. Journal of Soil Science and Plant Nutrition [Internet]. 2008 [cited 2020 Feb 12]; 8(1): 68-96: [about 1 p.]. Available from: https://sci-hub.tw/10.4067/S0718-27912008000100006.
8.      Sánchez RM, Guerra DL, Scherger M (Food and Agriculture Organization of the United Stae, National Institute of Agricultural Technology of Argentina). Evaluation of the irrigated areas affected by salinity and / or sodicity in Argentina. 2015 Report. Available from: http://www.fao.org/fileadmin/user_upload/rlc/utf017arg/anexosyapendices/5._Documento_Estimaci%C3%B3n_Areas_Salinas_en_Argentina.pdf
9.      Bourakhouadar J. Rehabilitation of saline/sodic soils by the use of a sulfuric acid [Master thesis]. Hassan II Agricultural and Veterinary Institute. Rabat, Morocco; 1999.
10.  Ahmad N. Evaluation of effectiveness of sulphurous acid generator in treanting the sodic water under different scenarios for wheat crop [Master thesis]. Lahore, Pakistan: University of Engineering and Technology, Centre of Excellence in Water Resourses Engineering; 2002.
11.  Buhidar BD. Sulfurous vs. Sulfuric [Technical report]. TMDL Specialist at Idaho Department of Environmental Quality. Idaho, Utha, USA; 2019.
12.  Aza, S. Productivity index of Rosa sp. Freedom and Vendela cultivars. (L. Dávila, Interviewer) Tabacundo, Pichincha: Finca Florícola Bella Rosa. October 26, 2018.
13.  Scott MT. How Does One pH Compare to Another? Better Crops. 2011; 95:2; 27p.  Available from: http://www.ipni.net/publication/bettercrops.nsf/0/59D631264C3510FD8525797C007813DF/%24FILE/Better%20Crops%202011-2%20p27.pdf
14.  Padilla W. Nutrient absorption curves of the Rockefeller variety rose under macro-tunnel conditions at the Agroganadera Espinosa Chiriboga Company, Cotopaxi - Ecuador [Degree thesis]. Honduras: Zamorano University, Faculty of Agricultural Sciences; 2007.