, Ikhlas Ramadan Matter2, Alaa Hussein Almola3
1,2,3 Department of Biology, College of Sciences, University of Mosul, Mosul, Iraq
* Correspondence: shsbio124@uomosul.edu.iq,
Available from: http://dx.doi.org/10.21931/RB/2022.07.03.28
ABSTRACT
The Enterobacteriaceae family is considered one of the medically essential families in which there is a continuous change in classification, and new species are added to it. In this study, we obtained a novel strain registered in the NCBI under Enterobacteriaceae bacterium strain PRL 4-2, with the accession number MW540823, and the isolate considered unclassified Enterobacteriaceae. The isolate was obtained from dishwashers, which is a mine for many new species and strains due to the unique environmental conditions of this habitat, fluctuation in temperature, use of high temperatures, utilization of cleaning materials as well as humidity and the presence of organic materials, especially in case of neglect of cleaning.   The isolate was characterized by its slow growth on culture media and its ability to form biofilms and possess some virulence factors. Its resistance to antibiotics was also studied, as it showed resistance to the antibiotics used in this study. The oddness for this strain is that it showed a different diagnosis when using VITEK (The VITEK 2 system has everything healthcare laboratories need for fast, accurate microbial identification and antibiotic susceptibility testing.) compared to diagnosis using 16S rRNA. As for the taxonomic tree, the closest species was Enterobacter sp. Strain 188. This study supplements a few other studies of this novel species, isolated from different environments. These researches can be integrated to give an itinerary for other studies on the new species and their different capabilities.
Keywords. Enterobacteriaceae bacterium, dishwasher, Enterobacteriaceae bacterium PRL-2, Enterobacter sp., biofilm.
INTRODUCTION
The Enterobacteriaceae family is the most extensive and diverse group of Gram-negative bacteria with medicinal significance. Biochemical features, antigenic construction, DNA-DNA hybridization, and 16S rRNA sequencing were used to classify the genera in this family. They are also widely distributed in nature and can be found in water, soil, plants, and the natural microbiota of human and animal intestinal tracts. They are grown aerobically or anaerobically, considered glucose fermenter and many other carbohydrates, convert nitrate to nitrite, positive to catalase, negative to oxidase, and their DNA  hold guanine-cytosine (GC) 39% - 59%. The majority of the genus and species in this family are straight Gram-negative and of modest size (0.3 to 1.0x 1.0 to 6,0 m), participate in a well-known antigen, do not create spores, are mobile with 5 pivot flagella in one pivot or lack flagella, and grow on peptone or extract of meat adding sodium chloride or without adding it, and also grow on   MacConkey agar. The medical and microbiological importance comes from The deployment of infections, pathogenicity and the abundance of bacteria with multi-resistant to antibiotics employed in therapy1.
Genetic information technology is used to identify many opportunistic pathogens; most of the opportunistic pathogens may belong to the Enterobacteriaceae2,3,4,5,6. Enterobacteriaceae family taxonomy is complex, where 28 genera and about 75 species were found in these families, continuously changing with the addition of a novel species7,8. Many novel species belonging to the Enterobacteriaceae family were unclassified and undergoing unclassified Enterobacteriaceae (miscellaneous), one of these unclassified species Enterobacteriaceae bacterium9.
In 2009,  Enterobacteriaceae bacterium "strain FGI 57" was identified in Panama on Pipeline Route from a fungal garden of leaf-cutter ant the Atta colombica. The Leaf-cutter ants are common herbivores in the Neotropics, feeding on plant biomass by cultivating specialized fungal gardens on foliar debris. Instead of feeding directly on the plant material, they are using it as fertilizer to grow specialized garden fungus dominated by the obligate symbiont fungal  Leucoagaricus gongylophorus. Recent research has revealed that the members within the Enterobacteriaceae family and the genus Pseudomonas live in fungus gardens, and metaproteomic studies in those environments have documented proteins of many strains FGI 57, implying that This bacterium is a vital part of the fungal garden's ecosystem10,11,12. In a study on a patient with infection in the biliary, a novel isolate of undetermined taxonomy was found together with the pathogenic Klebsiella pneumoniae strain named  AF1813. In another study, this species Enterobacteriaceae bacterium ENNIH2 isolates from hospital sewage14.
In our study, a novel species of Enterobacteriaceae isolated from an extreme environment with distinct characteristic MW540823.which show differences between biochemical and genetic identification technique. So we focused in this study on some properties of MW540823, such as the ability of biofilm formation, some virulence factors and antibiotic sensitivity.
MATERIAL AND PROCEDURES
The isolation of the Enterobacteriaceae bacterium
The isolate was obtained from dishwashers. Swabs were made from multiple areas of dishwashers, then the isolates were cultured on several media (McConkey agar, nutrient agar, EMB agar, blood agar), and the isolates were constantly purified until obtaining pure isolates. Depending on their growth and the shape of colonies on different media, we made smears on the glass slides to determine the shape and types of cells, whether they are gram-negative or gram-positive. To get more information about a unique isolate under study, we used the VITEK 2 system using GN cards to identify Gram-negative bacteria and then a Certain isolate was chosen to diagnose it using 16S rRNA.
16S rRNA sequencing
Total DNA of Enterobacteriaceae bacterium extracted depending on the manufacturer's instruction (intron biotechnology) of the G-spin DNA extraction kit. DNA was detected by agarose electrophoresis. PCR reaction employed in 25 μl final volume as in table 1 and the condition of reaction of 16S rRNA sequencing as in table2. Homologies were done by search in the National Center Biotechnology Information (NCBI) program, and the isolate of Enterobacteriaceae bacterium was recorded in NCBI  with accession number MW540823.

Table 2. Condition of 16S rRNA sequencing reaction
Bioinformatics of phylogenetic analysis:
The partial 16S rRNA sequences for MW540823 isolates were compared with others found in the online NCBI Blast database. The fasta of isolates of higher similarity with MW540823 were selected and downloaded for building a phylogenetic tree. This is done by MEGA 6 program.
The ability of the Enterobacteriaceae bacterium to form biofilm by tube method
Enterobacteriaceae bacteria can form biofilms, hemolysis blood, motility,  produce enzymes, and form calcite and antibiotic resistance.
The method of researcher Hassan and his group15 was adopted to test the ability of Enterobacteriaceae bacterium to form biofilms. The isolate was inoculated on a nutrient medium to activate it and incubated aerobically for 24 hours and 37 ◦C. After the incubation period ended, a group of colonies was transferred to glass test tubes containing tryptic soy broth medium with 1% sterilized glucose added and incubated aerobically for 24 hours and 37 °C.
The tubes used in the experiment are washed with a concentrated saline solution to sterilize them. Samples are poured inside them, and all this is done after the incubation period of the microbe. Then, it is dried and dyed with crystal violet dye at a concentration of 1% for three minutes. The excess dye was poured out and washed with deionized water. Then the tubes were left Dry upside down to notice the formation of biofilms on the inner walls and bottom of the tubes in the form of a violet layer.
The ability of the Enterobacteriaceae bacterium to hemolysis the blood
The blood samples preserved in hospitals, taken from donors earlier, were collected sterilely and in thermal conditions between 2 and 8 degrees Celsius, after which the blood agar medium was prepared. The isolate was activated for 24 hours in a liquid nutrient medium; then, the bacteria were cultured on a blood agar medium to test its ability to hemolysis blood16.
Surface Motility
A single colony was cultured in LB broth overnight at 37 Celsius to detect surface movement. After that, the suspension's optical turbidity was adjusted to match the 0.5McFarland standard, resulting in a roughly 108 CFU/mL concentration. The bacterial suspension of 1µL equivalent to 105 CFU/mL was then inoculated onto a fresh plate of 0.3 % LB-Agar. After 14 hours of incubation at 37°C, the diameter of the diffuse circular shape was determined17.1.4.D. Lipase and lecithinase((which are essential enzymes for this microbial pathogen) are indicated production:
Both lipase and lecithinase are indicated by egg yolk agar. Lipolysis is visible on sold egg yolk media by the creation of a thin glossy (pearly sheet) covering the colonies and a restricted opalescence in the media underneath them, which is best seen after the colonies are scraped .broad areas of opalescence surrounding colonies indicate lecithinase, which is quite intense, more significant than the areas formed by lipolysis. The media of this test consist of  Nutrient agar 85 ml,  Egg _yolk suspension  15ml. Melt the nutrient agar, cool it to 55°C, and the egg yolk is added to the cooled agar.
The method used to detect the production of lipase and lecithinase by incubating and looking for large areas of opalescence, which indicate lecithinase, and an iridescent film, which indicates lipolysis. Soak the plate first with an aqueous solution of saturated copper sulfate, let it sit for 20 minutes, drain the remaining fluid, then let the plate dry in the incubator for a few minutes. Lipolysis is confirmed by the greenish-blue color of copper washes of fatty acids18.
Antibiotic sensitivity by Agar disc diffusion method
The agar disc diffusion method, which was first devised in 194019, is one of the earliest methods for standard susceptibility testing and, in microbiology, clinical labs considered one of the most widely used techniques for testing the antimicrobial susceptibility20.
The key benefits include accessibility, repeatability, ease of altering antimicrobial disks, the ability to use as a screening method against a wide range of isolates, minimal cost and many more benefit21. A standardized inoculum of the test microorganism is inoculated onto Mueller–Hinton agar plates (90 mm diameter) (equivalent to turbidity at 05 McFarland). On the inoculated agar surface, up to 12 commerce-prepared folious disks (diameter about 6 mm ) with suitable doses of the tested substance are arranged. Agar dishes are incubated at 35–37°C for 16–24 hours, depending on the circumstances22,23. The diameter of the growth clear zone around every antibiotic disk is then calculated in millimeters ( measuring unit), with the disc diameter also included. This is done manually with a ruler or gliding caliper placed on the verso of the reversed agar plate24.
In this research we used the agar disc diffusion method to study the antibiotic susceptibility, we choose cefixime (CFM 5mcg),pencillin G(P10u),gentamicin(CN 10mcg),vancomycin (VA30 mcg),ceftazidime(CAZ30 mcg),cephalexin( CL30 mcg).
Calcite formation
The ability of bacteria to calcite formation was studied using  Luria Bertani acetate medium, consisting of Trypton 1 gm, Yeast extract 0.5 gm, NaCl  0.05 gm, Calcium acetate  1gm, Agar 1.5 gm, D.w.   100 cm3  PH 8, and the medium was sterilized using an autoclave. Then The crystals were chemically examined by adding a few drops of a 10% HCL solution to the calcifications on the plate to observe the formation of bubbles25,26.
RESULT
Identification of some characteristics of Enterobacteriaceae bacterium
The Colonies of this bacterium appeared on the nutrient agar in a light white color, while on the  Macconkey agar, the colonies appeared in a light pink mucoid colony, whereas on the blood agar, its colonies also appeared in white, and it needed a growth period of 48 hours sometimes, and at a temperature of 37 ᵒ C as shown in figure (1: A,B,C,D). 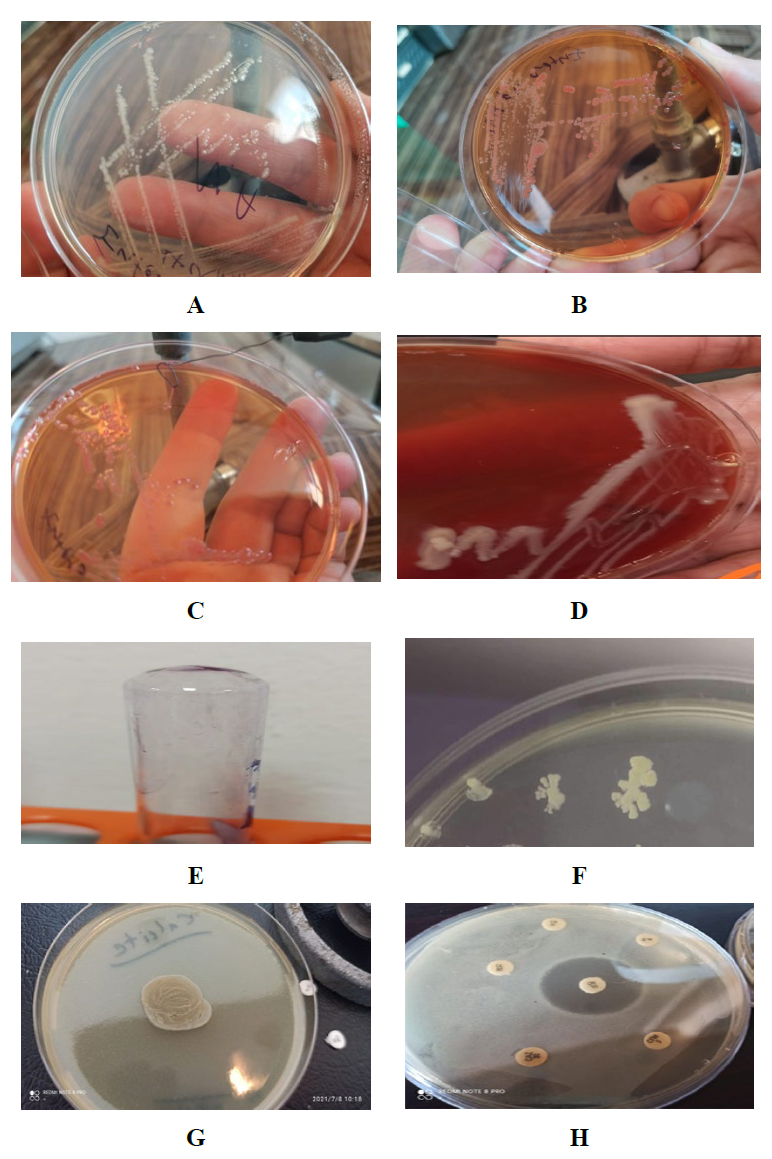