Polychaete is part of the old, a group that is longer than full and non-vertebrate. The polychaetes are multi-segment annelids with parapodia; setae are present in distinct fascicles. They are dioecious and have simple existing ducts from the gonads. They are usually marine, rarely fresh-water, and only rarely terrestrial or parasitic in their habitat. Any of these features needed not is present, and none of them is essential for the recognition of an animal as a polychaete.
Polychaetes are the dominant macrofaunal taxa in all marine silt from the intertidal region down to the deep ocean. They constitute more of the entire microbenthic creatures in terms of the number of species and individuals. The lion's share of the species is minimal and short-lived, showing a tall auxiliary generation. Consequently, they are a primary connection in marine nourishment networks and highlight necessarily within the diets of numerous bottom-feeding angles.
Being small-sized life forms, they play a pivotal part in biology and Environmental Impact Assessment (EIA) ponders. As numerous polychaetes are inactive, changes in their wealth and differences have been utilized in natural checking, especially in evaluating the estuaries' wellbeing.
The present survey area, Tanintharyi Island, Myeik Archipelago, is located in the Southern part of the Myanmar Coastal Region. This benthic survey was the preliminary survey of the R/V Dr. Fridtjof Nansen Research Vessel in the Myanmar Coastal Region. Myeik coastal area is rich in many economically important fish, shrimps, oysters, clams, and mussels. Man eats the flesh of many species.
Benthic animals are four groups, namely polychaetes, crustaceans, echinoderms, and mollusks. So, the R/V Dr. Fridtjof Nansen Research Vessel was conducted in Tanintharyi Island, Myeik Archipelago. Cherry Aung1 initiated the earliest study of marine benthos of the Myanmar Coast. She studied the subtidal benthos of Myanmar shelf waters. In 2011, Si Thu Hein2 study polychaetes from three Intertidal Mud Flat stations of Myeik Coastal Areas.
And then War War Soe3 also conducted soft-bottom intertidal macrobenthos from along the Coastal Areas of Myeik Archipelago. Moreover, Hlaing Hlaing Htoon4 reported the Dawei point of the Tahnintharyi Coastal Region. This survey's objectives are (a) to identify what types of polychaetes are found in present survey areas and (b) to analyze the diversity indices of polychaetes of Tanintharyi Island.
MATERIALS AND METHODS
The study area, Tanintharyi Island, Kyunsu Township, Tanintharyi Region, is located between Lat. 12̊ 50′ N & 10̊ 10′ N and Long. 98̊ 15′ E & 97̊ 50′ E. Samples of polychaetes were taken in June 2015 onboard the R/V Dr. Fridtjof Nansen Research Vessel on the parts of northern Myeik Archipelago. On 17 transactions, bottom sediments were sampled at depths of 26m, 43m,44m, 46m, 53m, 60m, 100m, 106m, 220m, 245m, 249m, 252m, 295m, 341m, 500m, 1000m, and 1500m (Table 1). The samples were taken with wire mounted Van Vee Grab, washed with sea-water in these two drawers, which included 5 mm sieve and 0.5 or 0.3 mm sieve and preserved by 4-8 % formalin or 96 % ethanol with 1 spoon of borax powder and put them into the 1-liter bottles. Species diversity indices for each sample were calculated using Shannon and Weaver5, Pielou6, and Margalef' s7. H' =-Pi*lnPi, E' =H'/lnS, D' =S-1/ln N Where, H' is the index of species diversity, Pi is the population abundance of ith species calculated by ni/N, ni is the number of individual of the ith species, N is the total number of individuals in a station, E' is the index of species evenness, S is the total number of species and D' is the index of species richness. 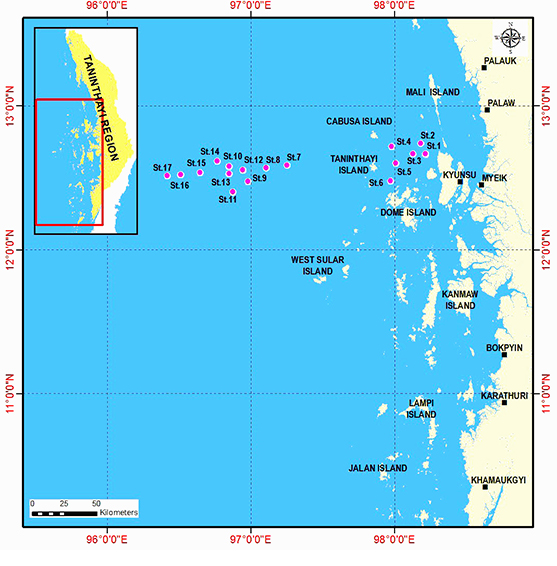 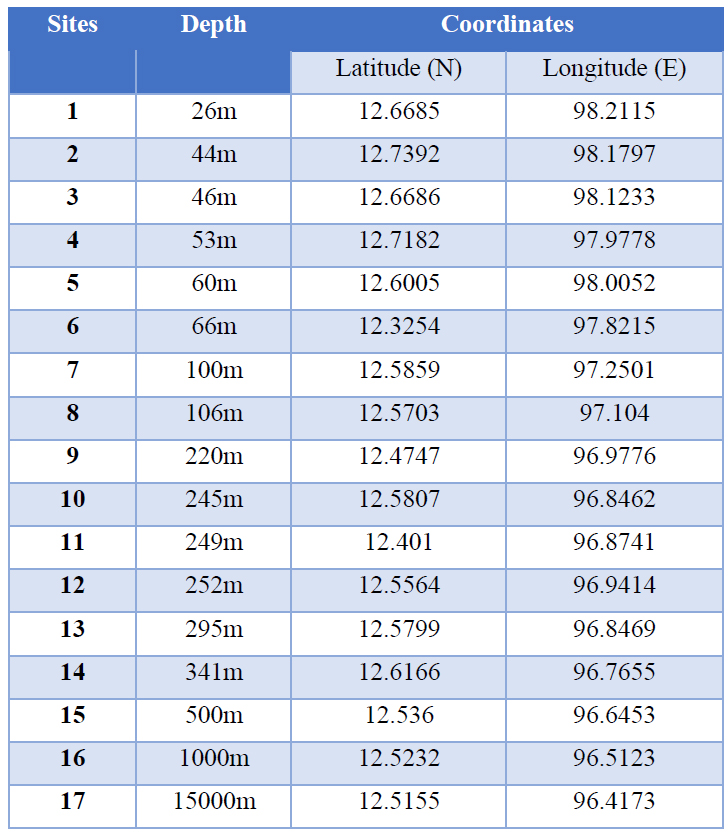 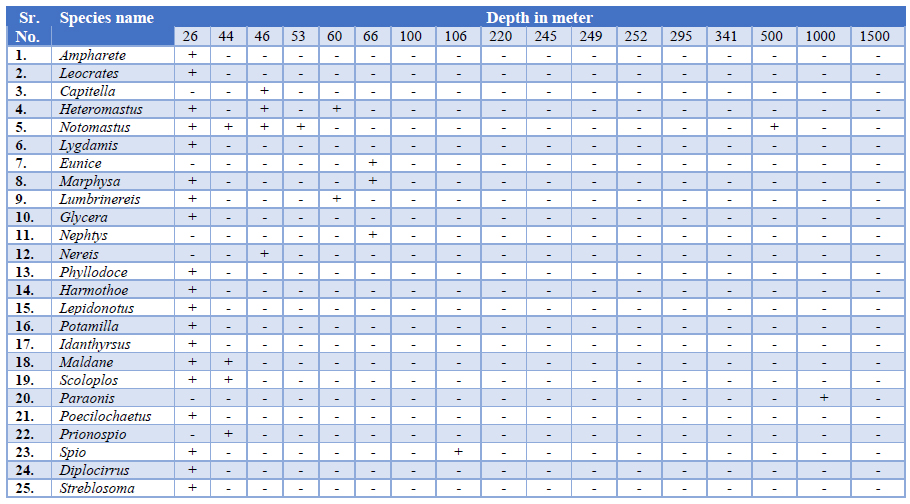 Table 2. Distribution of polychaetes at all sites of Tanintharyi Island, Tanintharyi Coastal Region. 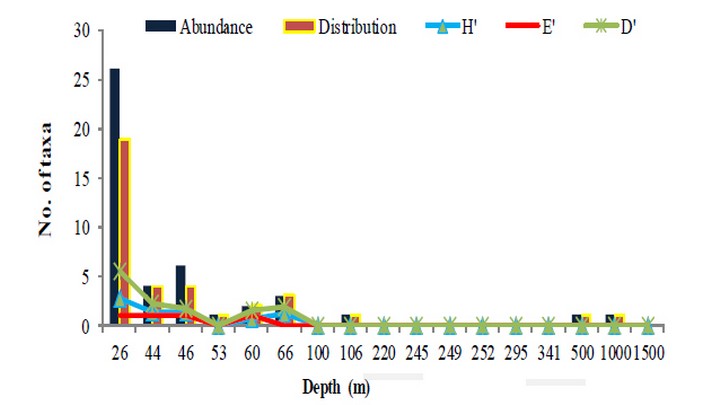 Figure 2. Composition, Abundance, Species Diversity, Eveness and Richness of polychaete in Tanintharyi Island
In the present study, Shannon diversity values for polychaetes were in the range of 0-2.79. The H′ for polychaetes in Myeik Archipelago and Dawei point was the range in 2.26-3.62 and1.83- 2.62 3, 4  respectively. The range of evenness (E′), richness (D′) for polychaetes was 0-1 and 0-5.52, respectively. In Myeik Archipelago, E′ value was the range in 0.74-0.88, and D′ was War War Soe3 reported 2.62-10.55. Moreover, in Dawei's point, the values E′ and D′ were ranged in 0.77-0.88, and 2.33-6.16 was noticed. 4
Low diversity and a higher population density of a few organisms denote stress conditions, which practically eliminate many species but promote a few survival. Contrary to this, high diversity and lesser relative dominance of individual species characterize areas of relative environmental stability. 8   In the present study, benthic production in terms of abundance and number of polychaete genera low in deepwater stations. Low diversity and lower benthic fauna at depth water stations indicate stress conditions because of destructive fishing activities (trawling and purse seining) and dredging. Besides, fishers' fishing activities, especially those living in a coastal area, can damage the bottom communities.
In the present study, high species diversity, species richness, species evenness of polychaetes were noticed at shallow water sites, low species diversity, low richness, and low evenness of polychaetes were noticed in depth beyond 66m. Species diversity index varied between 0.69 and 2.79. Sites 8, 15, and 16 showed the least species diversity of all sites that present only one genus. At stations 4 and 5, only 2 genera were occurred, showing the low richness of 1.44. In the other stations, the index varied from 0 to 5.52. On comparing for species, evenness distribution high values were observed at stations 2, 4, and 5. The study of polychaetes in the area showed a wide variation in distribution, abundance, and composition. This decrease in species richness and diversity of benthic fauna cannot be due to the lack of food, and the only factor that appears to be limiting is dissolved oxygen. 9
The study of benthos in the area showed a wide variation in distribution, abundance, and composition. This may be probably due to various biological and physicochemical environmental factors. Wide fluctuation in salinity and the nature of substratum and organic enrichment in the sediment are the critical factors restricting the abundance of benthos (Sheeba8). The studies by Rosenberg10 and Jones and Candy11 suggested that the benthic fauna of dredged areas differs from that of non dredged areas concerning species composition, abundance, and diversity. 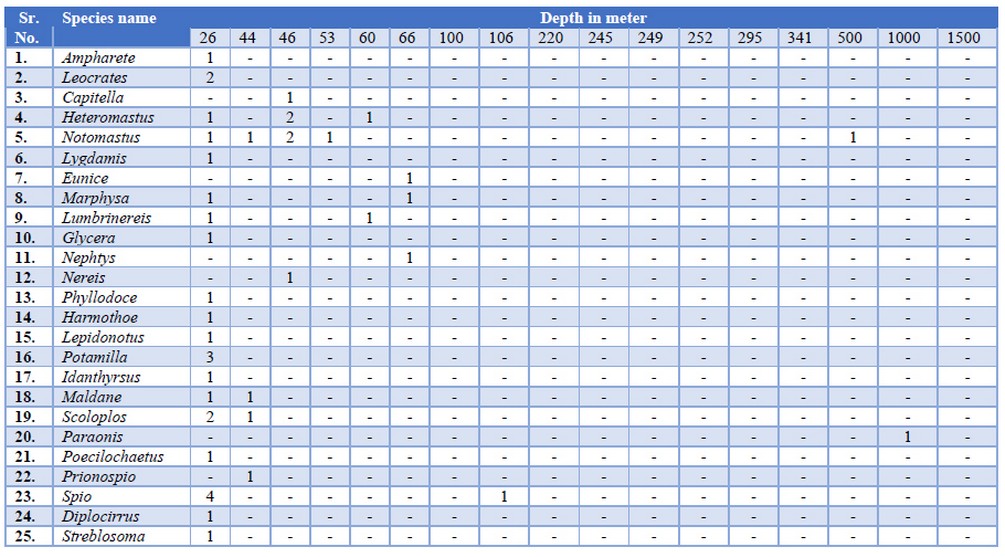 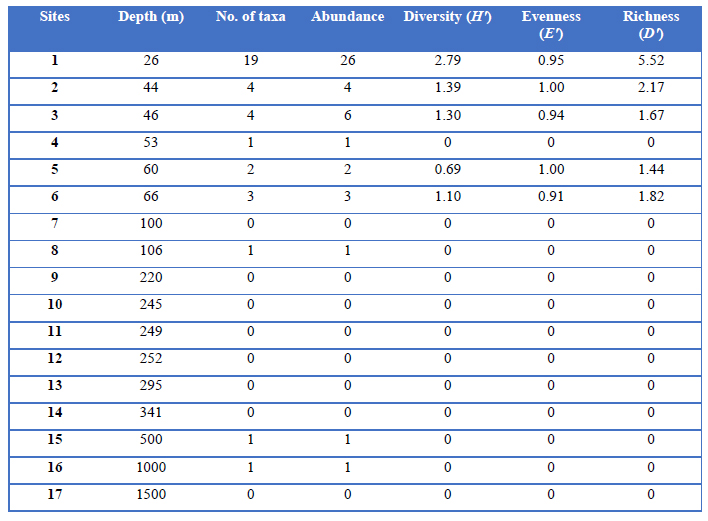 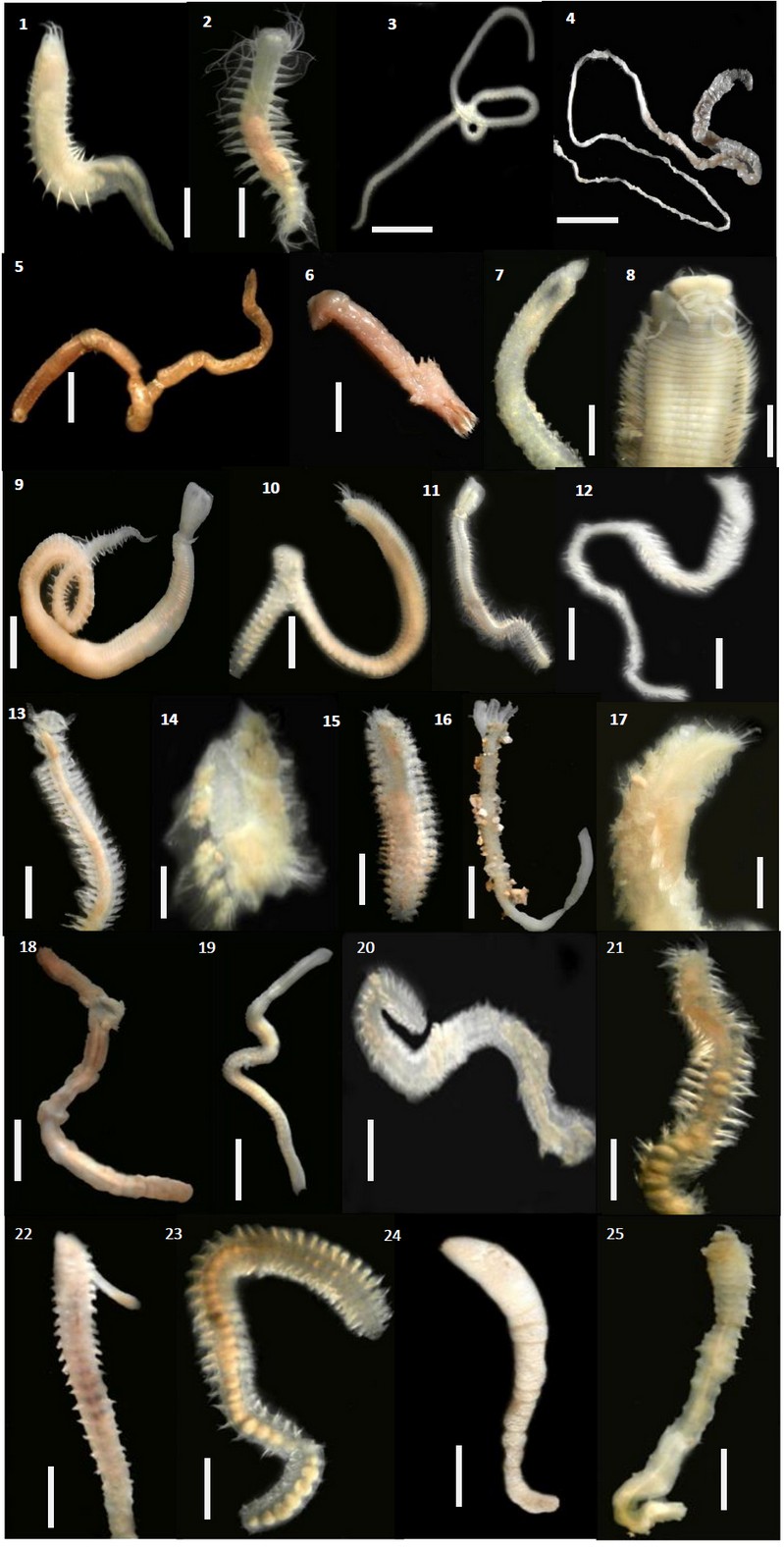 Figure 3. Polychaetes: 1) Ampharete, 2) Leocrates, 3) Capitella, 4) Heteromastus, 5) Notomastus, 6) Lygdamis, 7) Eunice, 8) Marphysa, 9) Lumbrineris, 10) Glycera, 11) Nephtys, 12) Nereis, 13) Phyllodoce, 14) Harmothoe, 15) Lepidonotus, 16) Potamila, 17) Idanthyrsus  18) Maldane,  19) Scoloplos,  20) Paraonis,  21) Poecilochaetus,  22) Prionospio,  23) Spio,  24) Diplocirrus,  25) Streblosoma. Scale bars= 1.5 mm
CONCLUSION
The recorded specimens comprised 25 taxa of polychaetes and some taxa of arthropods. Echinoderm and mollusks were removed because most are dead shells. Among the benthic fauna, polychaetes were the most dominant taxa from the present survey. Site 1 (26m depth) showed the highest abundance of benthic fauna (polychaetes) in terms of number and genera. In the present study, benthic production in terms of abundance and the number of genera low in deepwater stations. It can be stated that low diversity and a lower number of benthic fauna at deepwater stations indicate stress conditions because of destructive fishing activities and dredging. This study supports as baseline data for future  monitoring programs in the area.
Acknowledgments
I am thankful to Dr Aung Myat Kyaw Sein, Acting Rector of Mawlamyine University, Dr. San San Aye, Pro-Rector of Mawlamyine University, for their encouragement and supports in preparing this work. I am very grateful to Dr. San Tha Tun, Professor, and Head of the Department of Marine Science, Mawlamyine University, for his valuable suggestions and constructive criticisms on this study. I am really thanks to Hnin Pwint Htwe, Mres, Department of Marine Science, Myeik University, for their assistance during identification and many helps in research works. Thanks are also due to many of Dr Naung Naung Oo and other colleagues  in Department of Marine Science, Myeik University and Mawlamyine Unversity for their assistance and encouragement during this research work. Finally, I would like to thank my beloved parents and my dear brother for their physical, moral and financial supports throughout this study.
REFERENCES