×
Go to content
Bionatura Conference Series Vol 2. No 1. 2019
“Breaking Paradigms: Towards a Multi-, Inter- and Transdisciplinary Science” In commemoration of the 250th Anniversary of Alexander von Humboldt
REVISION/REVIEW
Previos / Index / Next
Alzheimer’s disease: An overview of the current treatments

Carolina Serrano-Larrea, David Clavijo-Calderón
available in: http://dx.doi.org/10.21931/RB/CS/2019.02.01.17
ABSTRACT
Alzheimer’s disease (AD) affects millions of people around the world and although there are treatments that help control symptoms and slow down the progress of the disease, there is still no cure. Current treatments include three acetylcholine inhibitors, a glutamate inhibitor and a combination of the two. Due to the failure of hundreds of clinical trials with monotherapies, multitarget treatments are currently being investigated that consider both brain and peripheral factors. Gene therapy is one of the most promising therapies to treat and prevent the development of AD. Nowadays, there is no available medical treatment based on gene therapy to treat AD; however, there are treatments in phase 1 and phase 2 clinical trials with promising results.  In this review, we will focus on the most important gene therapy treatments, CERE-110 (adeno-associated virus AAV2-Nerve Growth Factor), Intracerebral AAV gene delivery of APOE2 and gene therapy using PPARγ-coactivator-1α(PGC-1α)
Keywords: Alzheimer’s disease, gene therapy, adeno-associated virus, lentiviral vectors, clinical trials.
INTRODUCTION
Population aging is the principal factor that relates to the increase in the global burden of Alzheimer disease (AD). The lack of trustworthy biomarkers and preventive strategies and treatments are the major challenges scientists face nowadays1. Current findings have changed the research pathway science is following for the cure of AD. The systemic disturbances separated from the brain degeneration could be silent processes related to the progression of the disease and not only secondary effects of dementia1.
Alzheimer Disease Mechanism
There are many factors that support the diagnostics of AD, the most prevalent are neuron loss, brain atrophy, synaptic pathology, and neuroinflammation. However, the hallmarks of AD commonly known are amyloid- β (Aβ) plaques and neurofibrillary tangles (NFTs).2
There are different risk factors that can lead to the development of AD, they are divided into genetic and non-genetic factors. Early-onset Alzheimer Disease (EOAD) is inherited by an autosomal dominant way and there have been identified three genes that cause mutations that trigger the disease, the amyloid precursor protein (APP), presenilin 1 (PS1), and presenilin 2 (PS2). 2 The only confirmed risk factor to develop late-onset Alzheimer’s disease (LOAD) is the APOE4 allele of the apolipoprotein E gene (ApoE) 2. There are other characteristics that can mean a risk of AD like Down Syndrome because of the trisomy in chromosome 21, which includes the gene for APP. Overall, age is the most influential factor for the development of AD and the risk increases exponentially over the 65 years.2
APP is present on the synapses of neurons and shows beneficial effects on growing and overall health of cells.4 Amyloid β comes from the proteolysis of APP by the action of α-secretase and γ-secretase. Aβ is present not only in the brain but also in some peripheral organs and tissues such as kidney, heart, liver, spleen, muscles, and others.3 Lower levels of Aβ have been reported in healthy individuals. There are remarkable differences between brain and peripheral Aβ aggregates. The most aggregation susceptible form of Aβ is Aβ42 and it is present mostly in the brain, it is also the most toxic. The other form, Aβ40 is mostly present on the peripheral tissues and the mechanism that underlies this difference is not well known4.
The Aβ42 degradation methods failure is an important cause to develop sporadic AD which holds most of the cases (99%). There are many ways the brain gets rid of Aβ, some of them include phagocytosis, macropinocytosis, and endocytosis those processes are performed by several brain cells, many enzymes and efflux to the peripheral circulation. The exact mechanism of clearing Aβ from the brain to the periphery is not clearly understood. Peripheral phagocytes, astrocytes, oligodendrocytes monocytes, microglia, and neurons have important roles in Aβ clearance.1
Cerebral amyloid angiopathy is another characteristic of AD in which amyloid aggregates in the walls of blood vessels of the CNS, this feature is related with ApoE  ε4 allele. Otherwise, Glial cells have been found surrounding Aβ plaques which means they trigger the immune system and stars a neuroinflammation process that in many cases is beneficial but in chronic circumstances may result in accelerated neurodegeneration. Understanding the biological mechanism of degradation of Aβ is a key aspect in the development of AD drugs.2
Available treatment for Alzheimer Disease
The medications approved by the FDA for the treatment of AD are just five, and three of them are cholinesterase inhibitors, Donepezil, Galantamine and Rivastigmine. Those inhibitors avoid the elimination of acetylcholine (Ach) that is a key neurotransmitter for developing new memories, learning process, judgment, and other important processes. Constant levels of cholinesterase are important to maintain and compensate for the decrease in healthy neurons and maintain synaptic activity.5 Memantine is the fourth drug approved to treat AD by the FDA but only for moderate to severe stages. It performs uncompetitive antagonistic action over NMDA receptors and inhibits glutamate transmission.6 Cholinesterase inhibitors do not stop AD progression they work as a symptomatic treatment that inhibits the hydrolysis of Ach thus increasing its bioavailability to enhance communication between neurons in the cholinergic pathways and slow the development of AD symptoms.5
Nevertheless, current treatments and prevention mechanism for AD are not effective to cure the disease because there is not one treatment to fight one target, there is a huge complexity of AD mechanisms that must be considered.1 Over 100 clinical trials of monotherapies that target Aβ have failed so there is a clear need for multitarget therapies that consider the complex pathogenic machinery. There are many systemic disorders associated with AD such as cardiovascular failure, diabetes mellitus and metabolic diseases that are not the target of AD treatments so a therapy that focus on more targets than just the brain will be more effective.3 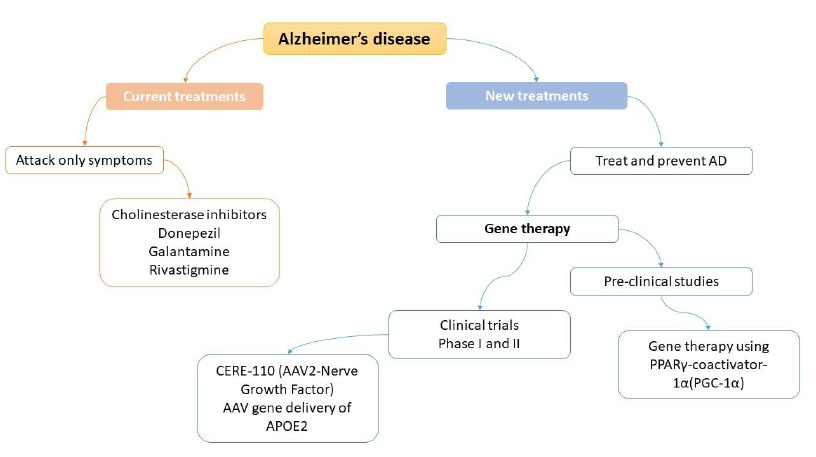 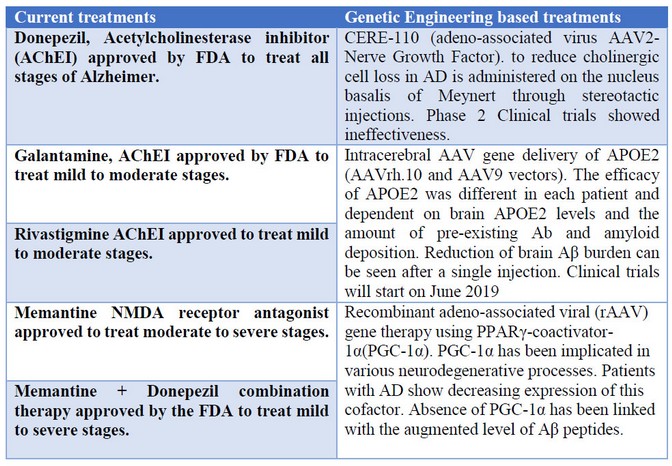