Figure 1. Map showing the limits of the Área de Conservación Hídrica Antisana (ACHA), the location of the vantage count points and the sampled segments (red) of the transects (unsampled segments indicated by white dots). Digital Elevation Model is shown in shades of gray, with darker shades indicating lower elevations. Contour lines are at 25-meter intervals.
Indirect Counts Using Pellet Groups
Nine transects, totaling 14,150 meters, were placed and oriented systematically within ACHA as recommended by Marques et al. 12 covering the majority of the altitudinal gradient, the most representative habitats, and areas with known high deer densities, making sure we were covering areas of low density as well. The transects were marked every 50 or 100 meters using PVC tubes. During counts, the centerline of the transect was marked with a rope and the distance to either side measured with measuring tapes. The selected width for the transects was 4 meters, 2 meters on either side of the transect. Two or three observers searched for pellet groups.
Within the 8457 ha area of ACHA we recognize six habitats that we consider important for the use and distribution of deer within the reserve: humid herbaceous vegetation, dry herbaceous vegetation, exposed soil, cushion plants, shrubby páramos and páramo grasslands (Table 1). We are in the process of digitizing polygons for these habitats to estimate the size of the area covered by each of them; however, as of now we only have area estimates for humid herbaceous vegetation, dry herbaceous vegetation, and exposed soil (Table 2). In this study, we pool data for the remaining habitats, which we have similar pellet densities. Habitats were classified on the basis of RapidEye satellite imagery, particularly choices calculation of the Normalized Difference Vegetation Index (NDVI) in QGIS software. We do not use the habitat classification by the FONAG because, based on our observation, it does not reflect the deer’s’ habitat choices accurately. 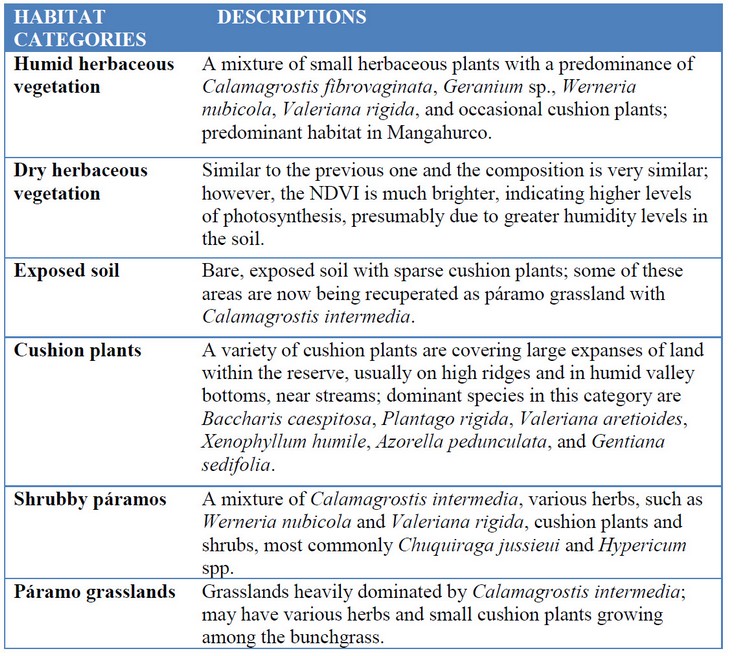 Fecal Standing Crop (FSC)
FSC  is based on counts of all accumulated pellets groups within sampling plots17 and assumes that all objects are seen and recorded18. Our analyses presented here are based on surveys of 24.5 sampling plots (each complete plot measures 100 m x 4 m), for a total sample area of 9400 m2 in four habitat categories (Table 2). Only fecal pellet groups consisting of six or more pellets were considered17, and those lying on the edges of the sampling plots were recorded when the center of the group was inside the plot. Fecal pellet group density was calculated as follows:

Table 2. Details of the transects surveyed using FSC through counts of pellet groups
RESULTS
Vantage Point Counts
Detectability of animals may vary due to weather conditions, nearby agricultural practices, the experience of the observers, and types of vegetation15,16. The first day at dawn, for example, fog and rain at most vantage points decreased deer detectability. In contrast, during a mostly sunny afternoon on the second-day observers detected more deer. Mayle et al. 13 recommend using the maximum value counted as the final estimate; therefore, we consider the 760 deer seen on 13 December 2018 during the afternoon to be the minimum abundance estimation at ACHA (Table 3). The vantage point at Mangahurco yielded the highest number of sightings with 259 deer, followed by Antena with 225 deer. With the exception of Laguna Santa Lucía, where only 22 deer were counted, the remaining vantage points produced 40-60 deer observations. These numbers provide us an idea of the deer’s habitat preference within ACHA. Sites dominated by humid herbaceous vegetation supported the most deer, whereas sites with lower counts were composed of a mix of cushion plants, C. intermedia páramo grass, and shrubs.

Figure 2. Overall age structure and sex distribution of white-tailed deer at ACHA.
Moreover, this method gives us insights on sex ratios and age structure. The number of females outnumber males about 3 to 1. Similarly adults outnumber juveniles and fawns 6 to 1 (Figure 2). The vantage point Antena stands out because of an unusual high number of female deer and fawns. Perhaps this area presents the best condition in the ACHA for females to nurse their young (Table 4). 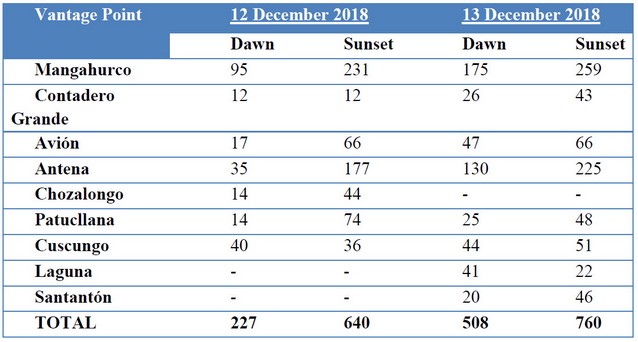 Table 3. Number of white-tailed deer counted at the different sites during the vantage point counts.

Table 4. Sex and age groups of deer by vantage point (see Figure 1).
Fecal Standing Crop
Our preliminary estimate for the average length time for pellets to decay at ACHA as of March 2019 is 240 days. This estimate is just a little bit lower than the prospective value (277.80 days) estimated by Mateus21 at PNNC. However, this value may change upward as so-called prospective estimates can vary due to factors such as rainfall, diet, among others20. The habitat with the highest pellet groups density was humid herbaceous vegetation has the highest pellet group density; however, its area only represents 3.9% of the entire area so it does not have the highest absolute deer abundance (307 individuals; Table 5). This value is surprisingly similar to the number estimated during the visual census (305 individuals) at the same vantage points (Mangahurco and Santantón), which include most of the humid herbaceous vegetation at ACHA.