×
Go to content
Bionatura Conference Series Vol 2. No 1. 2019
“Breaking Paradigms: Towards a Multi-, Inter- and Transdisciplinary Science” In commemoration of the 250th Anniversary of Alexander von Humboldt
INVESTIGATION / RESEARCH
Previos / Index / Next
Quantification of fumonisins by the ELISA method in maize of different communities of the Cochabamba and Chuquisaca Departments

Stefania Torrico Torrico¹, Andrea Condori Vincenti¹, Miguel Angel Florido², Nora Medrano Mercado¹
available in: http://dx.doi.org/10.21931/RB/CS/2019.02.01.5
ABSTRACT
Maize constitutes more than 75% of the food base of the Inter-Andean Valleys and is one of the foods most at risk of fumonisin and yet there is no information about the incidence level of fumonisins in this region. In this project we collected 174 samples from organic maize producers communities of the inter-Andean valleys that work with the Valles Foundation, the number of fumonisins was determined by the Elisa Method, with 0.05 ng/ml being the lowest value obtained in the community of Alcalá and 12.05 ng/ml,Highest value obtained in the community of Mizque.
Keywords: Fumonisin, Organic maize, mycotoxins
INTRODUCTION
In the inter-Andean valleys of Bolivia, maize is the main crop of rotation with different crops such as peanuts and potatoes. It is one of the bases of the feeding of Bolivian population especially in rural areas, being the main departments producing corn in the country Santa Cruz, Chuquisaca, Cochabamba and Tarija.
Maize constitutes more than 75% of the food base of the peasant family in the inter-Andean valleys. 90% of the maize is destined for consumption as a mote (cooked grain) or food prepared domestically. 1
Mycotoxins are toxins produced by the metabolism of some fungi present in the environment and which, consumed in high concentrations, are dangerous to human and animal health. Like any dry grain, corn is commonly contaminated with Mycotoxins (Fumonisins). There are current studies that exist several fungi of the genus Fusarium (F) that produce a series of toxic secondary metabolites (mycotoxins), being fumonisins B1, B2 and B3 the majority isolated in foods. Fumonisins have been detected in maize and its by-products throughout the world and reported relevant concentrations in maize-based foodstuffs 2,3
The main fumonisin-producing species are Fusarium verticillioides (synonymous with Fusarium moniliforme) and Fusarium proliferatum, which are common soil fungi. Fusarium fungi are commonly found in cereals grown in temperate regions around the world and are especially abundant in maize 4. Fusarium species infect grain before harvest, hence the important role of field prevention during maize development, with adequate agronomic and storage practices 5.
The toxicological effects of fumonisins are related to diseases in animals such as equine leukoencephalomalacia and porcine pulmonary edema and to esophageal cancer in humans 6. Fumonisin B1 is a possible carcinogen in humans (IARC Group 2B) 7 with maize being the most susceptible food.
MATERIALS AND METHODS
Project Explanation Seminars
In order to obtain the samples of maize, seminars have been carried out to the maize organic producers in relation to the objectives of the Project, the seminars have been carried out by the technical staff of the Valles Foundation in each community.
Collection of maize samples
The samples of corn on the cob were collected in manila envelopes correctly identified with the name of the farmer or owner of the maize crop and the community to which the sample corresponds. Once they were obtained, they were transferred to the Chagas disease and Immunoparasitology Laboratory- Biology Department– Science and Technology Faculty San Simón University.

Number of samples analyzed
A total of 174 maize samples were collected from the organic maize producers participating in the project, which were previously ground in a manual mill and sieved for later analysis.
Quantification of maize samples
The fumonisins (B1, B2, and B3) are a group of mycotoxins mainly produced by Fusarium moniliforme in maize samples, these were determined using the commercial FUMONISIN ELISA ASSAY Helica Biosystems Inc., Santa Ana, CA), which has been developed following the manual provided in the kit. Absorbance was measured at 450 nm using a microplate reader (Stat Fax 303 plus). Standards and samples have been analyzed through an analysis of the dose-response relationship for a toxic substance that can be plotted through a curve, where the point at which toxicity appears is the "threshold dose" level. The shape and slope of the dose-response curve are extremely important in predicting the toxicity of a substance at specific dose levels.
Direct Competitive Enzyme-Linked Immunosorbent Assay  (ELISA)  for the detection of Fumonisins B1, B2, and B3 in maize.
Twenty grams of each sample of pre-milled maize were weighed, 60% ethanol was added in a ratio of 1 in 2, for the extraction of fumonisins, then it was filtered with the Whatman No. 1 filter paper, later diluted in distilled water deionized. Samples as standards have been analyzed in duplicate. The polystyrene wells were previously coated with antibodies with high affinity for the detection of fumonisins B1, B2 and B3. A fumonisin-specific antibody optimized to cross-react with the three types of fumonisins has been coated to the polystyrene microwells. The toxins were extracted from the maize sample with 60% ethanol and diluted 1/40 with deionized distilled water. The extracted sample and fumonisins conjugated with the enzyme Horseradish peroxidase (HRP) are mixed and added to the microwells coated with antibodies. The fumonisins from the extracted sample and fumonisins conjugated to Horseradish Peroxidase (HRP) compete to bind with the coated antibody to the microwell. The contents of microwells are decanted and non-specific reagents are removed by washing. An enzyme substrate-3,3 ', 5,5'-Tetramethylbenzidine (TMB) is added and a blue color is developed. The intensity of the color is directly proportional to the amount of Conjugate and inversely proportional to the concentration of fumonisins in the sample or standard. Therefore, as the concentration of fumonisins in the sample or pattern increases, the blue color will decrease. An acid stop solution is added which changes the color of the chromogen from blue to yellow. The microwells are optically measured by a 450 nm absorbance microplate reader (OD450). The optical densities of the samples are compared to the ODs of the kit standards and an interpretive result is determined expressed in ng/ml which is calculated to obtain data in ppb or ppm.
Analysis of data
All the data have been placed in an EXCEL database, for later analysis. A dose-response curve was constructed using the software, Gen5 software-Biotek with the OD values of fumonisin standards containing the following concentrations of 0.0, 2.5, 7.5, 20. 0, 50.0, 150.0 ng/ml.
Once the standard curve or dose-response curve was constructed, the data from the samples were placed on the template created for later interpretation in ng / ml subsequently transformed into ppb or ppm (figure 1). 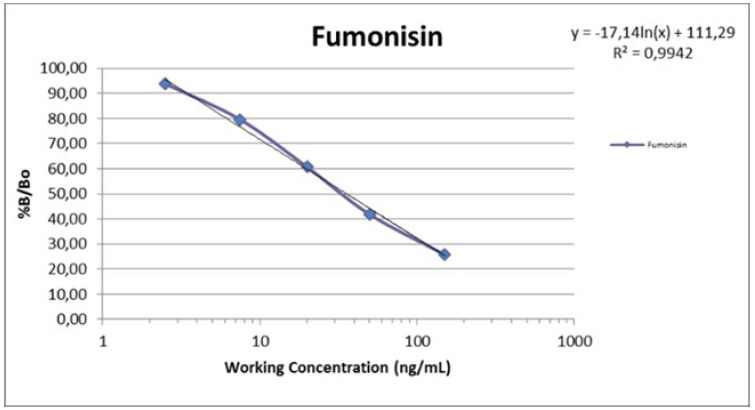 Table 1. Values Table by Communities
The results of the Center for Food and Natural Products, 2013 in previous years regarding the presence and level of fumonisin infection found that 87.5% of the samples were contaminated with this mycotoxin at incidence levels above 200 ppm (parts per million). which was determined by the HPLC method, the permissible limit for consumption being 1 ppm, unpublished data. In the present study, we found an incidence level of 3.39 ppm, in the Municipality of Mizque. Although we found lower concentrations of fumonisins in this municipality is not without concern as it reflects a risk for families and their animals.
Data reported by the Center for Food and Natural Products (CAPN), indicate that the level of incidence of fumonisins in maize exceeds by more than 80 times the maximum level permissible for human consumption is 1 ppm. This information, by far, reflects that human and animal populations are at high risk of contracting diseases associated with the consumption of these toxins. The CAPN states that the Municipality of Mizque is the one with the highest average value, unlike the municipalities of Villa Serrano, which had the lowest average values in that study. The fact is that the five municipalities have values above the allowable limit, placing fumonisins as the most dangerous mycotoxins for the health of people and animals in these production areas.
Fumonisins are present in all municipalities, however, Mizque is the municipality with the highest incidence, both in the present study and in the one carried out by CAPN, emphasizing that its concentration is low up to a mean of 3.39 ppm and its concentration was 12.05 ppm. It is a municipality that is characterized by being warm and of little relative humidity, so apparently, in warm and dry climates, causal agents that produce fumonisins find better conditions to increase their virulence or aggressiveness. However, this assertion must be backed up by more in-depth research and using up-to-date climate information, which for now is a weakness in the study areas.
CONCLUSIONS
An average maximum level of 3.39 ppm was determined which is above the maximum allowed value of 1 ppm, but below the results previously obtained in the CAPN in 2013, which shows that there is a decrease in the amount of fumonisins present in the organic corn samples analyzed.
RECOMMENDATIONS
Proper crop rotation can  be an effective way to reducing this inoculum in the field. Early sowing and harvesting in temperate latitudes may reduce the risk of infection.
Perform favorable agronomic cultural practices to control the development of fungi in corn. An adequate, rigorous selection before and during storage, control at moisture levels that prevent the activity of microorganisms, the application of permanent ventilation. In addition to a fast and effective drying for later transport and storage, they can contribute to an efficient control
ACKNOWLEDGMENT
This research work has been supported by the Valles Foundations Cochabamba-Bolivia as part of the project to promote the production of healthy peanuts and maize financed by the McKnight Foundation. We also thanks. Fabiana Fuentes and Captain Javier Paredes from Harry Williams Hospital, for collaborating in the culmination of this research. The authors have stated that they have no potential conflicts of interest.
REFERENCES
1.    FDTA VALLES- Fundación Valles (2015). Estudios Nutricionales Vinculados a los Niveles de Aflatoxinas en Orina. C. Alegre, Documento Interno 19-24.
2.    Shephard GS, Thiel PG, Stockenström S y Sydenham EW (1996). Worldwide survey of fumonisin contamination of corn and corn-based products. J AOAC Int. 79:671–687.
3.    GLM (GruppoLavoroMicotossine) (2007). Fourth Fusarium Forum hosted by the European Commission, Brussels 15-16 January 2007.
4.    Ariño A y Bullerman LB (1994). Fungal colonization of corn grown in Nebraska in relation to a year, genotype and growing conditions.JFoodProt 57:1084–1087.
5.    Recomendación 2006/583/CE de la Comisión, de 17 de agosto de 2006, sobre la prevención y la reducción de las toxinas de Fusarium en los cereales y los productos a base de cereales. DO L 234: 35-40.
6.    Marasas WFO, Miller JD, Riley RT y Visconti A (2000). Fumonisin B1. Environmental Health Criteria 219.WHO, Geneva
7.    IARC (International Agency for Research on Cancer) (2002).Some traditional herbal medicines, some mycotoxins, naphthalene and styrene.IARCMonogr.82:301–366.
Received: 3 March 2019
Accepted: 28 May 2019
StefaniaTorricoTorrico¹, Andrea Condori Vincenti¹, Miguel Angel Florido², Nora Medrano Mercado¹
Lab. de Chagas e Inmunoparasitología, Depto. de Biología, Facultad de Ciencias y Tecnología, Univ. Mayor de San Simón (1), Fundación para el Desarrollo Tecnológico Agropecuario de los Valles (Fundación Valles)(2).
Correspondence:Nora Medrano Mercado, Email:medrano.nora@gmail.com
Back to content