×
Go to content
Bionatura Conference Series Vol 2. No 1. 2019
“Breaking Paradigms: Towards a Multi-, Inter- and Transdisciplinary Science” In commemoration of the 250th Anniversary of Alexander von Humboldt
INVESTIGATION / RESEARCH
Previos / Index / Next

Kamil Makowskiabc*, Javier Arizab, Dolors Serrac, Jordi Garciab, Laura Herreroc, Marta Lópeza, Nicolás Montesdeocaa
Available in: http://dx.doi.org/10.21931/RB/CS/2019.02.01.9
ABSTRACT
The fatty-acid synthase (FAS) is the key enzyme that executes de novo fatty acid synthesis and is overexpressed in some human cancer tissues. C75 is a synthetic FAS inhibitor, which produces the death of cancer cells. In this work, we synthesized three derivatives of C75, two homologs with 1 and 2 carbons more in the beta position of the lactone and the other one with a change in the elongation of the aliphatic chain in gamma position from 8 to 15 carbons. The results from FAS inhibition and cytotoxic properties suggest that the performed changes in the derivatives decrease their activity.
Keywords: C75, Fatty acid synthase inhibitor, FAS, α-Methylene-γ-butyrolactones
INTRODUCTION
Fatty acids (FAs) are essential for every living cell and have a wide diversity of biological functions. FAs are the main components of phospholipids, triglycerides, and other more complex lipids. Thus, cells need FAs for cellular membranes, energy storage or lipids for cellular signaling. Cancer cells have an increasing demand for fatty acids due to its high proliferation rate and the necessity of lipids as a building material for the cellular membranes. The FAs building blocks may come from exogenous sources, lipid storage or from de novo FA synthesis, nevertheless, in cancer cells, synthesis de novo is the main source of FAs 1.
Limiting FAs availability could result in a therapeutic strategy to kill cancer cells. One of the best ways to achieve this is by blocking the FA biosynthesis. The key enzyme in synthesis de novo of long-chain FA is a fatty acid synthase (FAS). Since FAS is overexpressed in many cancer cell lines pharmacological inhibition of that enzyme has a cytotoxic effect more powerful in cancer cell rather than normal cells and decrease the growth of tumors in animal models 2. Recently, imidazopyridine-based FAS inhibitors were discovered and TVB-2640 reach phase II of clinical trials demonstrating that FAS can be a viable target for cancer treatment3,4.
The C75 is a synthetic FAS inhibitor with a structure of α-methylene-γ-butyrolactone, which produce the death of cancer cells from many different tissues. In the majority of studies, the racemic C75 was used, however, it was demonstrated that (–)-C75 is responsible for FAS inhibition and do not produce a weight loss of treated animals as the racemic mixture5. In the more recent study, several alcoholic homologs of C75 were synthesized and (–)-UB006 was found as a better FAS inhibitor and cytotoxic agent with 40 times lower IC50 in some cancer line6.
In this work, we synthesized some derivatives of C75 with the aim of finding structural requirements for inhibition of FAS and new compounds with higher cytotoxic properties.
METHODOLOGY
The organic synthesis was carried out by standard procedures. A thin layer, column chromatography, melting point, NMR, I, and high-resolution mass spectrometry were used to characterize and identify the obtained products (data not shown).
The anti-carcinogenic activity of the different derivatives of C75 has been tested by two approaches: determining in vitro the inhibitory capacity on the FAS enzyme and checking the cytotoxic effect in different tumor cell lines. For the FAS activity assay, a spectrophotometric method was used using cytosolic hepatic extracts obtained from a rat. To evaluate the cytotoxic effect of the drugs, an MTT cytotoxicity assay was performed 6.
RESULTS
Three racemic derivatives of the C75 were synthesized, two homologs with 1 (UB207) and 2 (UB244) carbon more in the beta position of the lactone and the other with an elongated aliphatic chain in gamma position from 8 to 15 carbons (UB183).

Figure 1. Structure of the C75 and its synthesized derivatives.
UB183 was synthesized in a similar way as C757 but instead of nonanal hexadecanal was used which was obtained by oxidation of commercially hexadecanol using sodium hypochlorite and TEMPO (2,2,6,6-tetramethylpiperidine) as a catalyst. For purification purpose, the conversion of trans and a cis mixture of diastereomers intoselenoester derivatives, separation, and oxidation to recover double bond was necessary 8.

Figure 2. Synthetic route of UB183.
The trans lactone formation in the synthesis of UB207 was started from tricarballylic acid and was accomplished by Parker’s protocol 9. Subsequently, α-methylenantion was performed in two steps, carboxylation using methylmagnesium carbonate and decarboxylation - elimination using formaldehyde and N-methyl aniline to finally obtain the UB207.

Figure 3. Synthetic route of UB207.
The synthesis of UB244 was accomplished as previously 6 from dimethyl maleate.

Figure 4. Synthesis of UB244.
The FAS inhibitory activity of the synthesized compounds was studied and compared with the racemic C75. All the synthesized derivatives show a lower inhibition profile of FAS when compared with C75 (Figure 5) which indicate small flexibility in distance between the carboxylic group and methylene. The length of the alkyl chain seems to be less important as decrease of inhibitory activity is not so drastic.  The cytotoxic activity was also studied and compared with C75 against some cell lines as ovarian - OVCAR3, prostate -PC3, colon - HCT116, and pancreas MiaPaca-2 as shown in Figure 6. The compounds UB183 and UB207 showed lower cytotoxic activity compared to C75 in all tested cell lines, which corresponds to their behavior against FAS. In contrast, the compound UB244 showed a slightly more cytotoxic activity than C75 especially in HCT116 (44.4±5.8 vs 22.3±2.5 µM) cell line suggesting that maybe another mechanism than FAS inhibition is involved in the cytotoxic activity of this compound, since UB244 present decrease in inhibition activity of FAS enzyme (460±44 µM vs 2952±717 µM). 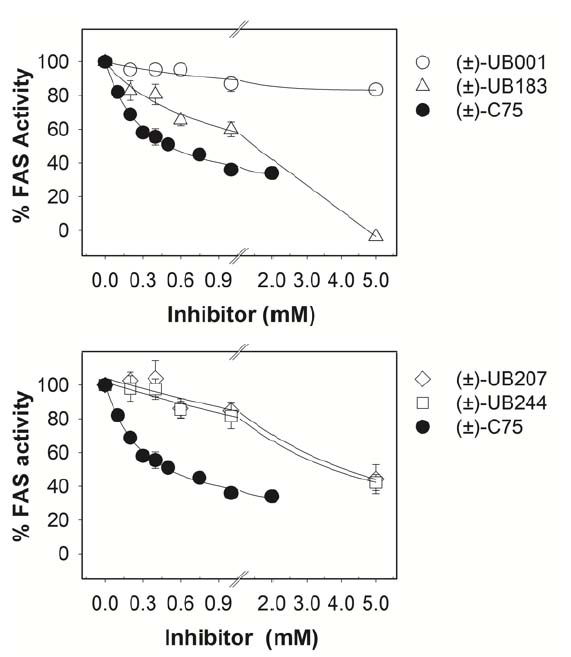 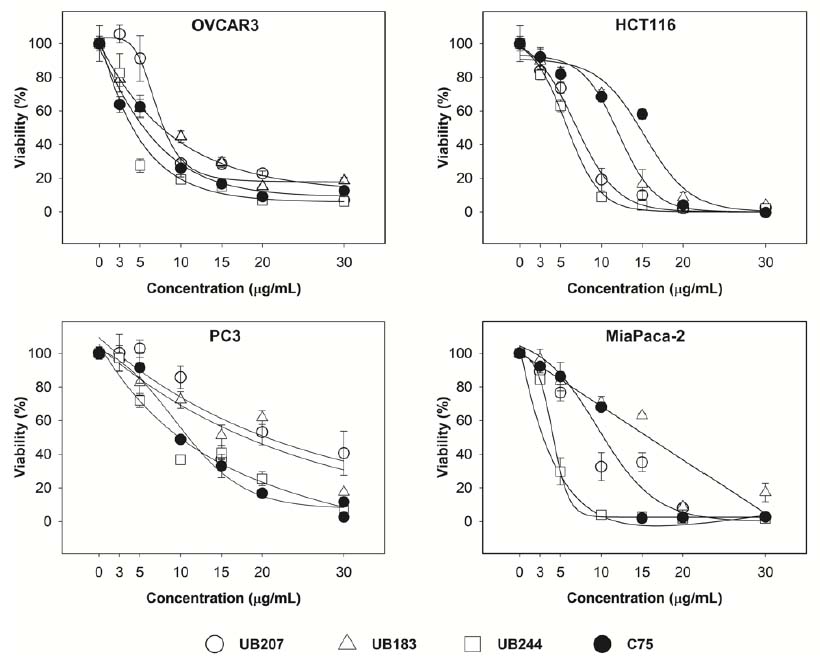