INTRODUCTION
The reproductive and respiratory syndrome virus (PRRSV) is caused by a RNA virus which affects pigs of all ages and is responsible for one of the largest economic losses in the swine industry in North America.1 The structural organization of PRRSV is based on a Nucleocapsid (N) protein, membrane protein (M), glycosylated envelope proteins (GP2a to GP5), E protein and the ORF5a protein.2 GP5 is the most variable protein of the virus and is responsible for the lack of immunological cross-reaction between North American (NA) and European (EU) strains. PRRSV structural proteins play an important role for inducing an early antibody response in pigs during day 5 to 10 post infection (PI). This response is mainly directed against N protein but also toward envelope protein.3 The first antibodies detected during PRRSV infections are IgM around day 5-7 PI and different subclass of IgGs are detected in serum around day 7-14 PI.4 Studies have demonstrated that virus-neutralizing antibodies (NAbs) may inhibit the replication of virus in alveolar macrophages and high titers of these antibodies in serum can clear the virus from the blood.5 The main target for NAbs is GP5 in which it has been discovered the major neutralizing epitope (NE) called Epitope B founded in both PRRSV strains. This fact leads the synthesis of small peptides based on Epítope B, in order to promote the production of NAbs by B cells.6
Currently, several immunological assays are being used to detect specific anti-PRRSV antibodies. Indirect fluorescent antibody test (IFA) and Enzyme-linked immunosorbent assay (ELISA) are examples of the most used in North America. Nevertheless, all those assays show disadvantages, for example IFA presents unknown sensitivity for individual animals, it is not automated; thus, it is difficult to perform on a large number of samples. On the other hand, even though ELISA has high specificity and good sensitivity it has been reported individual unexpected positive results in seronegative herds which elicit an unacceptable level of false-positives cases in commercial ELISAs.7 In addition, ELISA in general has low binding for small molecules since generally absorbs peptides larger than 15-20 residues.8
Dot-blot assay represents a good alternative for this preliminary study to detect specific antibodies in field pig sera against small synthetic peptides that represent linear epitopes from protein GP5. Dot-blot is a sensitive, specific and easy technique to perform and as employs a nitrocellulose membrane with small pore size to immobilize antigens, it is not needed of carrier larger proteins for high binding of small peptides.9
In this work, it was identified specific antibodies against small peptides that were synthetized based on the sequence of epitope B of protein GP5 from North American and European strain of PRRSV using a Dot blot assay. The antibody response from different pig categories were analyzed toward each peptide and those results were compared to commercial ELISA.
MATERIALS AND METHODS
Synthetic peptides
Peptides from GP5 were synthesized based on published sequences for the genes encoding PRRSV structural glycoproteins (Table 1). These sequences were collected into a database (Geneious Pro 5.5, Biomatters, New Zealand), homology was determined on a nucleotide and amino acid level, and conserved sites in the PRRSV structural glycoproteins were selected. Their exposure to the immune system was predicted in silico by the 3D protein structure (HHPred, Max-Planck-Institute for Developmental Biology, Tübingen, Germany). Each peptide sequence (9 to 10-mer peptides) representing potentially immunogenic epitopes were chosen and were commercially synthesized (CanPeptide, Pointe-Claire, QC, Canada).

Table 1. Summary of synthetic peptides. NA: North American strain EU: European strain.
Pig serum samples.
Twenty-eight pig serum samples with known PRRS-serostatus with a commercial ELISA (IDEXX, Westbrook, ME) belonging to 4 pig farms from the province of Alberta, Canada were screened against the peptides using a Dot-blot assay (Table 2). The sera came from three different pig categories: 20 from sows (6 PRRS-positive and 4 negative), 7 grower pigs (5 PRRS-positive and 2 negative) and 9 finisher pigs (6 PRRS-positive and 3 negative). A positive-PRRSV grower pig was used as positive control and serum sample from a newborn piglet belonging to negative farm was selected as the negative control. 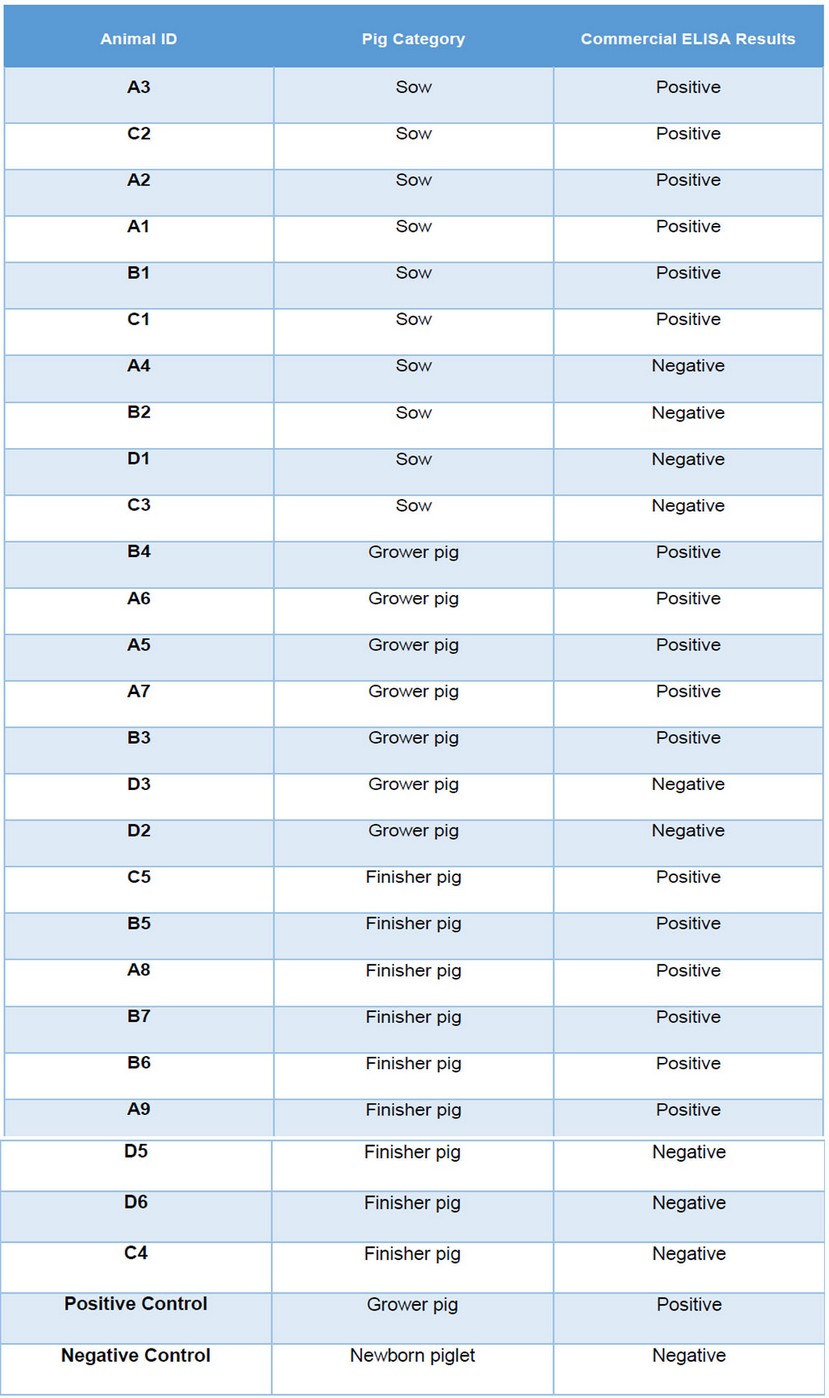 Table 2. Individual serum samples organized based on pig category (sows, grower and finisher pigs) and antibody PRRSV status (positive and negative).
Swine sera screening against peptides through Dot blot assay.
Protran BA79 Nitrocellulose Blotting Membrane 0.1µm (GE Healthcare, Pittsburgh, PA) assembled in Bio-Dot Microfiltration System (Bio-Rad, Hercules, CA) was coated with 100 ng/well of peptides and incubated at 4°C overnight. Membrane was blocked adding bovine albumin serum (BSA) 1% in TBS buffer for 1 hour (h) at room temperature (RT). Swine sera from all pig categories were diluted in Log2 serial dilutions from 1:200 to1:1600 and pre-absorb in BSA 5% during 1 h at RT. Consequently, wells were incubated with 100ul of the pig sera at 37°C during 1 h. Rabbit anti-pig IgG (Sigma-Aldrich, St Louis. MO 63103 USA) was diluted 1:4000 in PBS buffer and 100 ul/well of the conjugated antibody was added to the membrane and incubated at 37°C for 1 h. ECLTM was added for color development with an incubation time of 5-10 minutes.  Color intensity was measured using VersaDocTM MP 4000Imaging System, (Bio-Rad, Hercules, CA), and the analysis was performed using software Quantity One®.
Data analysis
Data obtained from software Quantity One® was analyzed to calculate the cut-off value for the samples based on the negative control. It was established that samples with intensity values (intensity*mm2) 3.5 times greater or equal than negative control were considered positive. On the other hand, concordance level between Dot blot and commercial ELISA was determined by calculating Kappa index, through the program VassarStats.
RESULTS AND DISCUSSION
Comparison between commercial ELISA and Dot Blot results by animal category against GP5 P1, GP5 P3, GP5 P12 and GP5 P29
The results showed that sows category exhibited a higher level of concordance (kappa index between 0.55 to 0.60) with commercial ELISA results, in comparison to the other two pig categories which obtained a level of concordance between discrete to moderate. Finisher pigs showed the lowest level of concordance with a Kappa index of 0.25 (Table 3). 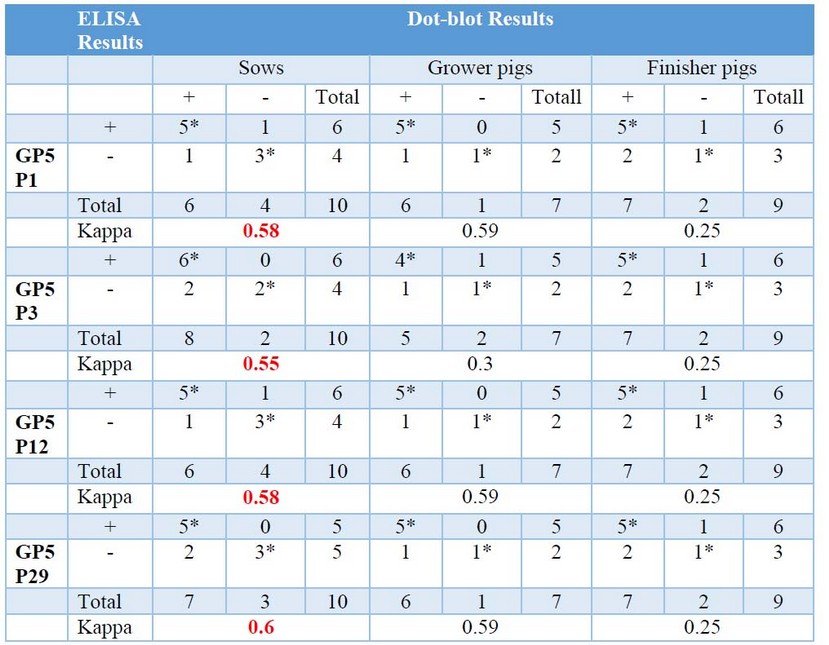 Table 3. Level of concordance between commercial ELISA results and Dot-blot results per animal category against GP5 P1, GP5 P3, GP5 P12 and GP5 P29. + (Positive); - (Negative); * (positive and negative concordant samples in both tests). Kappa: < 0 (No concordance); > 0.00 - 0.20 (Insignificant); 0.21 - 0.40 (Discrete); > 0.41 - 0.60 (Moderate); 0.61 - 0.80 (Substantial); 0.81 - 1.00 (Almost perfect).
On the other hand, there was not a significant difference between the level of concordance in sows per peptide. In grower pigs the lowest concordance was observed for peptide GP5 P3 and finisher pigs exhibited the same level of concordance for all peptides (Table 3).
The difference between the results obtained in this study and the commercial ELISA can be attributed to the different cut off point used in each assay. Cases of false-negative and even the amount of antibodies present in the sample it can also be involved in those results. Some studies have been reported differences between results obtained with one or other assay even using the same antigen for both of them. This could be attributed to the fact that each assay differs in the protein tested (N protein in ELISA and GP5 in Dot-blot) thus, specific antibodies against GP5 P1, GP5 P3, GP5 P12 and GP5 P29 may have been detected by Dot-blot assay in those samples that resulted to be positive in this study but originally were negative by the commercial ELISA. Differences between the sensitivity and specificity in each assay, it can also be associated to those results.9,10
Comparison between positive pig’s categories toward peptides
The results for GP5 P1described that sows showed higher antibody titers than grower and finisher pigs because it was the only pig category from which 50% of the samples reacted positively to the peptide from the lowest concentration of serum tested (0.000625). Also, it was observed that only against GP5 P1, the percentage of positive sows decreased when swine sera were more concentrated therefore may be the detection capacity of the Dot-blot assay reaches a point from where the system is saturated because of a high concentration of GP5 P1 or the high concentration of sera (Figure 1a). 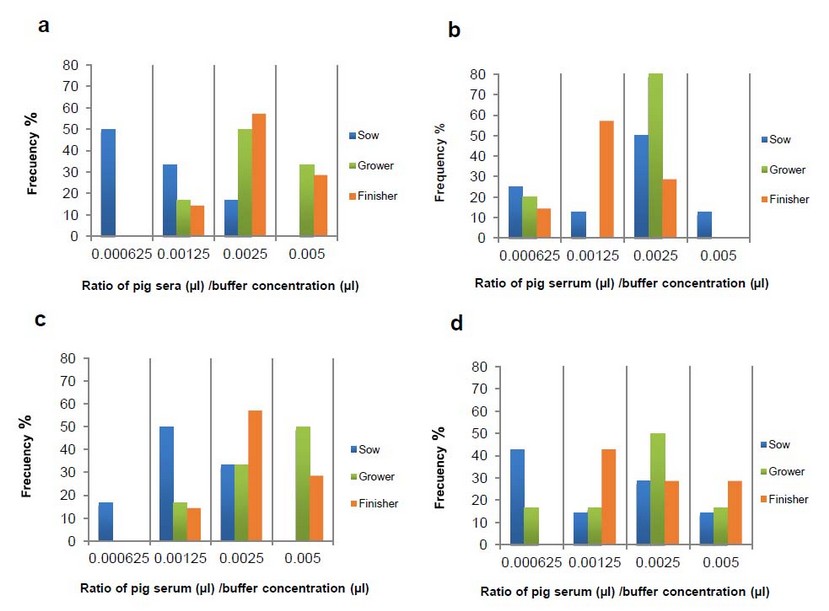