ABSTRACT
The research dealt with assessing the quality of gray water generated from houses in some areas of the left side of the city of Mosul and determining the suitability of reusing it for irrigation; for this purpose, 90 samples of gray water were collected from fifteen neighborhoods of the left side for a period of six months during the period from November 2020 to April 2021. The research aims to conduct a monthly study to assess the quality and suitability of gray water for irrigation by conducting physical, chemical, and biological tests for gray water generated from houses Where the values of E.C. ranged (751-1621) μS/cm  and T.D.S. (483-684) mg/L, and pH ranged (6.3-8.2), and the concentration of sodium ions ranged between (7.8-147) mg/L as for the concentration of C.O.D. (Chemical Oxygen Demand) ranged between (69-200) mg/L While the C.O.D. values ranged between (69-200) mg /L , The S.A.R. values were between (0.18-2.98) meq/L, and the phosphate ions values ranged between (0.25-3.7) mg/L; finally, the average of fecal coliform bacteria was (0.0-4) x 105/100 ml. The study concluded that the water was classified under the category (C3-S1) high salinity - low sodium, which is suitable for irrigation of plants that are well tolerant to salinity and is suitable for use in soils that do not contain complex layers that prevent leaching because these soils will need to be washed when irrigated with this water. This study recommended diluting gray water by mixing it with fresh water and using it for irrigation.
Keywords: characteristics, Greywater, Reuse, irrigation, S.A.R. (Sodium adsorption ratio), C.O.D.
INTRODUCTION
Iraq has suffered from water scarcity in recent years, and this problem has steadily been exacerbated with the increase in the population. The per capita water supply will decrease annually unless alternative water sources are provided. This, in turn, pushes decision-makers and technicians to search for unconventional water sources, including gray water and treated wastewater for irrigation in environmentally safe ways, and the problems of the agricultural sector under the current water shortage conditions are a difficult task for decision-makers in Iraq due to the low share of the agricultural sector of water and the increased demand for water for other sectors. Therefore, it is necessary to reuse all the available water resources, including low-quality water sources, to face these problems.1
Contaminated water sources such as gray water and treated wastewater are used for irrigation purposes in the dry and semi-arid countries of the region because of the lack of water in them, and their use reduces the demand for freshwater sources. The use of this type of water is either directly, that is, by adding this water to the soil directly, provided that not to be stored for a long time before use or indirectly by being thrown into rivers and streams, gray water is an essential source of water that can be used to irrigate crops and trees. It is divided into two types: the first is called (Blackwater); it includes water that is discharged from the toilet; this type of water contains a large number of pathogens. It also contains a high concentration of organic matter, in addition to containing nitrogen and phosphorous.2
The second type is called (Gray water); it's the water collected from sewage discharge of cloth washers, showers, bathtubs, and sinks; it is called gray water because it is left for an extended period, its color will change to gray.3,4
Gray water flowing from showers, washing machines, and bathroom sinks represents more than 60% of the total domestic wastewater, indicating that gray water is an attractive source for reuse for irrigation purposes if it is properly exploited and used on correct environmental bases.5
MATERIALS AND METHODS
Study Area
The study area included several neighborhoods on the left side of the city of Mosul, and its included fifteen neighborhoods on the left side, which are:( Al-Muhandiseen, Al-Hadbaa, AL- ZiraaI, Al-Mazarie, AL-Qadisiyah 1, Al-Kafaat 1, AL-Shurta, AL-Zuhour, AL-Muthanna, Al-Noor, Al Baladyat, AL-Qahira, AL-Zahraa, Sumer, Aden). These areas are highly populated. The coordinates of the studied areas were fixed using the G.P.S. of the google earth program, as shown in table (1).

Table 1. The names of the areas and their locations
Sample collection
Water samples were collected from fifteen neighborhoods of Mosul from the left side of the city in the study area from November (2020) to April (2021) per month. The greywater samples were collected from the gray water drainage point of each house to conduct physical and chemical tests by using sterile polyethylene bottles with a capacity of 250 ml, and samples for bacterial tests were collected using sterilized bottles with sterilizers at a pressure of 1.5 pounds and degrees (121) ° C for 15 minutes. The samples were kept in a refrigerated container away from light until they reached the laboratory.6
Field tests
It included measuring temperature using an alcohol thermometer, measured in degrees Celsius, measuring total dissolved solids by T.D.S meter in mg/L, electrical conductivity in μS/cm by using E.C. meter, and measuring the acidity function using a pH meter.
Laboratory tests
It included measurement of the chemical oxygen demand (C.O.D.) by Closed Reflux method, determination of sodium ion using the Flame photometer, determination of Phosphate ion by Stannous Chloride method, counting the number of fecal coliform bacteria by (Multiple Tube Method) and Most Probable Number method.6 and finally calculation of the sodium adsorption ratio (S.A.R.). The chemical tests were conducted at the College of Environmental Engineering, while the biological tests were conducted at the College of Environmental Sciences and Technologies at the University of Mosul.
Results
The components of gray water depend mainly on the quality of the available water sources and family habits when cleaning and preparing food.7
Physical Characteristics
Temperature
Temperature is one of the critical environmental factors affecting the qualitative characteristics of water, as it affects water's chemical and physical reactions.8 Table (2) and Figure (1) show that the temperature of the studied water samples fluctuated during the study period. The temperature range (15-32.3) ° C and averaged (20-23.8) ° C the highest temperature was in the site (8) in November 2020, and the lowest was in the site (5) in January 2021. This difference is attributed to the use of warm water when preparing food and for cleaning.9

Figure 2. Average values of electrical conductivity and total dissolved solids concentration
.
Chemical Characteristics
pH
The pH function expresses the activity and concentration of the hydrogen ion in water, the pH in the gray water depends mainly on the pH and alkaline of the water supply sources. The pH of gray water is directly related to certain chemicals such as softeners, bleaching agents, and disinfectants.11 The results shown in table (2) and Figure (3) showed that the pH values ranged between (6.3-8.2) and averaged (6.88-7.62), the highest value of the pH was in December 2020, January, February, and April 2021 in each of the site (3,4,7,10,11) while the lowest value was in March 2021 in site (4) and the pH of tap water was (7.30). Most of the samples tended to be alkaline this is due to the presence of alkaline substances used in detergents, this is due to the presence of alkaline substances used in detergents such as sodium hydroxide-based, where it was found that the main chemical components present in gray water are generated due to the use of these detergents in cleaning or washing activities. Detergents consist of surfactant active substances that act as the primary active agent in most cleaning products. 14 in general, the values ​​of the pH function for all areas were within the limits of international standards allowed for irrigation.

Figure 3. shows the average values of the pH in the studied areas.
Sodium ions
The results are shown in table (2), and Figure (4) indicate that the concentrations of sodium ions ranged between (7.8-147) mg/l at an average of (32.1-83.5) mg/l. The highest value was in site(13) in November 2020 while The lowest value was in site (15) in February 2021, This rise is attributed to the fact that soap and detergents contain sodium salts.15 and the average values of sodium in tap water were (6.5) mg/l.

Figure 4. Shows the average concentration of sodium ions of samples.
Phosphate ion
The results of the current study showed that phosphate concentrations ranged between (0.25-3.7) mg/L with an average of (0.5-2.1) mg/L, where the highest value was in site (14)  in November 2020, while the lowest value was in site (11) in January 2021, The reason for these high values is due to the use of detergent products containing a high percentage of phosphates.15

Figure 5. shows the average concentration of phosphate ions in the samples
Chemical Oxygen Demand (C.O.D.)
The results of the study shown in table (2) and Figure (6) indicated that the C.O.D. concentrations were high, ranging between (69-200) mg/L and an average of (82.5-121.3) mg/L. This rise is due to the presence of Biodegradable and non-biodegradable organic matter and detergents. Produced from washing powders and dishwashing liquids, in addition to the presence of anionic surfactants and other oil substances in gray water samples, which increase the concentration of COD.16

Figure 6. Shows the average C.O.D. concentration in the samples.
Sodium adsorption ratio (S.A.R.)
The sodium adsorption ratio represents the inverse relationship between sodium ions and calcium and magnesium ions and the degree of the tendency of irrigation water to enter into cation exchange reactions in the soil.17,18,19
The results shown in table (2) and Figure (7) showed that the values ranged between (0.18-2.98) meq/L, where the lowest value was in (15) in February 2021, while the highest value was in (10) during November 2020, The reason for the decrease is due to the high concentrations of calcium and magnesium ions compared to sodium ions,20 and when comparing the results with the certified International Classifications for Irrigation The (S.A.R.) values of gray water for this study were within the S1 category, meaning that the water is of good quality for irrigation and there is no problem to affect the permeability and filtration.21

Figure 7. The average of S.A.R. for the water of the studied areas.
Biological Characteristics
Fecal Coliform Bacteria (FC)
It is a branched group of Total Coliform bacteria that is naturally present in huge numbers in the intestines of humans and warm-blooded animals, and the presence of these bacteria in the water is evidence of water contamination with feces.22,23
The results are shown in table (2) and Figure (9) indicate that the number of fecal coliform bacteria ranged between (0.0-4) x 105/100 ml, where the highest value was in site (13) and (5) in December 2020 and February 2021 respectively when the lowest value was in most of the gray water samples in the studied areas. The contamination of some water samples in this study is usually attributed to largely associated with poor personal hygiene and disposal of grey water that contains washed nappies or as a result of washing shoes, or due to the presence of children under the age of 12 years in the house, or it may result from washing the raw meat.24,25

Figure 8. Shows the average number of fecal coliform bacteria in the cells of the sample x 105/100 ml. 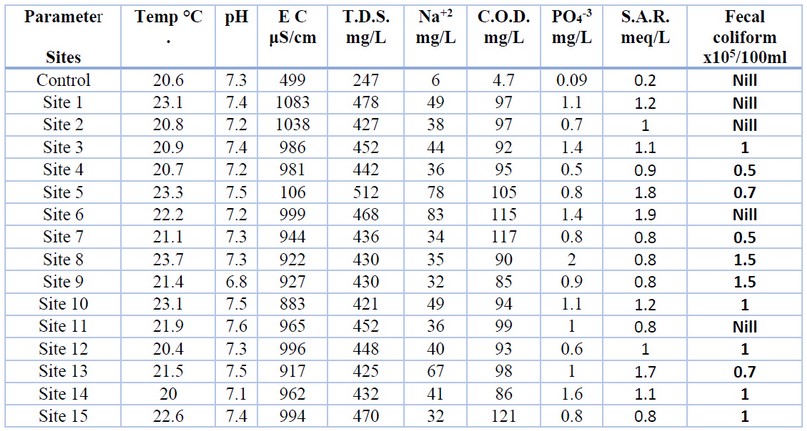