, Wafaa Hadi AL-Hashemi2, Waleed Jaleel abed AL-Kelaby3, Mohummed E. Mansur 4
1Laboratory investigation Department, Kufa University – Iraq .
2,4Basic Science Department, Kufa University–Iraq.
3Veterinary Anatomy and Histology Department, Kufa University –Iraq.
*Correspondence:. Ghofran Filiah Abd Al-Hussan , e-mail [email protected]
Available from: http://dx.doi.org/10.21931/RB/2022.07.02.6
INTRODUCTION
The respiratory system of the laboratory animals is a benefit to discovering unique species variations; therefore, it is used as animal models for direct scientific studies1. The lungs are the essential part of the respiratory system; they are characterized by compact soft tissue and a spongy mass of tissue covered by the pleura, which is extended from the thoracic cavity within the thorax. The lung is lobulated and has different lobes from side to side.
The right part of the lung consists of four lobes, while the left part of the lung includes three-part (lobes); the lung's organs are associated with the trachea, which branched into the bronchi of the right-left sides inside the lung tissue. The trachea is tubular that exchanges the air in and out of the lung lobes. Subsequently, the bronchi enter the lungs at the hilus region called intrapulmonary bronchus. It branched off into smaller and even smaller tubes called primary and secondary bronchioles and ended with clusters of tiny air sacs called alveoli2,3. Alveoli are looked like little grapes, branches or very tiny balloons. The bubble shape of alveoli is given the lungs a surprising amount of surface area4. In particular, Rabbits' respiratory system comprises anatomical features of the thoracic cavity and its components and the diaphragm, which serves as the significant respiratory muscles5. The diaphragm is a large dome-shaped muscle that contracts rhythmically and involuntarily most of the time6.
The trachea, bronchi, and bronchioles are part of the lower respiratory system, the branching structure of the airways that supply the lungs with oxygen. Interested in studying the histological and morphological description of the respiratory tract of rabbits because the rabbits are valuable animal models; the respiratory system is considered hyper-responsive to diseases that could be closer to asthma disease in the human.
MATERIALS AND METHODS
Preparations of the Rabbit
Twenty male rabbits were used for this study. The rabbits were killed under good health conditions and followed the appropriate instructions of the animal ethics of the University of Kufa in Iraq. Animals were dissected directly for gross study and collected specimens for the histology study. Skin, muscles and ribs were removed to study the respiratory system. The anatomical study identified the larynx, trachea, bronchus and lungs, and the length and width of the bronchi and lungs were measured.
Histology staining of specimens
The organs are individualized and photographed, and the width and length of each lung and the size of the trachea and bronchi are measured; after that, the specimens of organs are kept in special containers with 10% formalin to prevent lysis of tissue for the histological study7.
Hematoxylin and eosin stain
take 1 gram of Hematoxylin stain powder melting in 10 milliliters of ethyl alcohol, then 20 gram of potassium alum which dissolved in 200ml of distilling water, heat the mix reach to boil, added the Hematoxylin into solution 35 boiled for 1/2 minutes finally 0.5 gram of mercuric oxide7.
After 15 minutes in an alum hematoxylin stain jar, the slides were washed with running tap water for 5 minutes. After that, dying slides with eosin working liquid for 10 minutes. They were then transferred directly to 70% ethanol for 1 minute. The slides were placed twice in a jar containing 80% and 90% ethanol for 1 minute. Specimens were incubated 2x in absolute ethanol, then a minute in xylene. Finally, a neutral mounting media was used to attach the slides. All steps were carried out at room temperature7.
RESULTS
Anatomical studies and histological study:
In the current study, the result showed that the thoracic cavity of rabbits is smaller than the abdominal cavity and the respiratory of rabbits consists of the upper and lower respiratory tract. The upper respiratory tract refers to the section of the respiratory system that lies above the sternal angle (on the exterior of the thorax), upper the folds of the voice, or upper the cartilage of the cricoid figure 1. The larynx was located partially between the part of the upper and lower airway of the respiratory system.The upper respiratory system consists of the nasal cavity and paranasal sinuses, the pharynx (nasopharynx, oropharynx, and laryngopharynx), and a part of the larynx. Each lung was covered by a costal surface, which was adjacent to the ribcage; a diaphragmatic surface, which was facing downward toward the diaphragm; and a mediastinal surface, which was facing toward the medium of the chest, against the heart, great vessels, and the carina has two mainstem bronchi branching off from the base of the carina. Although, The larynx and trachea, bronchi (primary, secondary, and tertiary), bronchioles (including terminal and respiratory), and lungs make up the lower respiratory system (including alveoli). The trachea was divided into two bronchi which are extended inside the parenchyma of the lung and branched into small primary and secondary bronchioles.
The left lung rabbits are smaller than the right lung, consisting of three lobes resulting in the left deviation and its heart interposition, and there are no septa in the lungs. Our study is clarified the different lengths and widths between the left and right of the lung in the table (1). Rabbits' left lungs were smaller than their right lungs and had three lobes: cranial (lobuscanialis), middle (Lobos Medius), and caudal (Lobos Cauda) (lobuscaudalis). The cranial, middle, caudal, and accessory lobes of the right lung were the biggest. 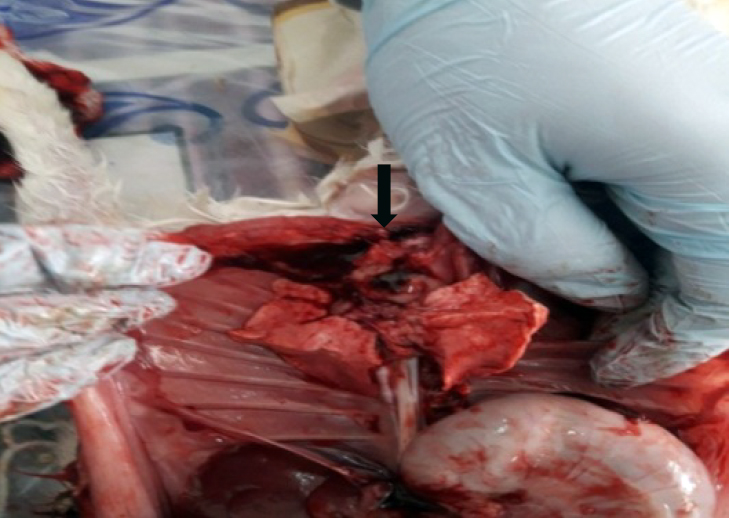 Figure 1. A photograph of the lung of the respiratory organs(black arrowhead) In the thoracic cavity 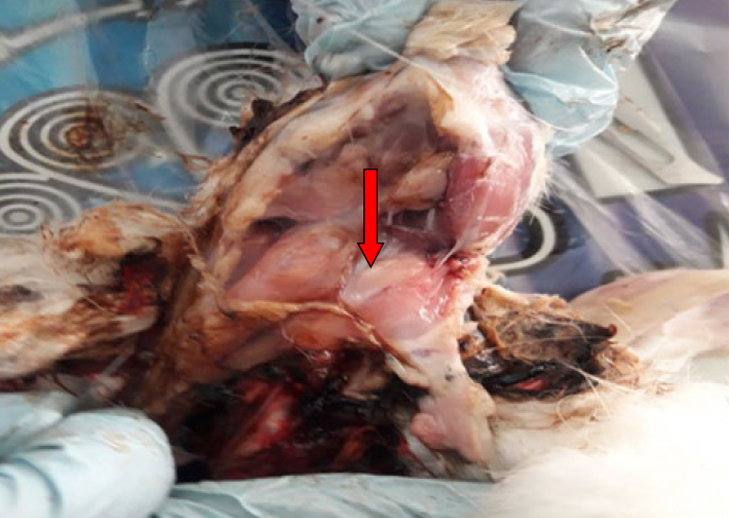 Figure 2. A photograph of the esophagus of a rabbit (red arrowhead).
The trachea
The ciliated pseudostratified epithelial tissue lines the wall of the trachea. It contains the unicellular mucous cell called goblet cell; this epithelial seated on the basement membrane, and below it is the lamina propria, which is a loose connective tissue, and then the submucosa dense irregular connective tissue, which contains seromucous glands and opens into the lumen of the trachea by a duct, and under the submucosa, its cartilage-like c-shaped and the tow ends found smooth muscle. Finally, the layer is adventitia, its loose connective tissue. 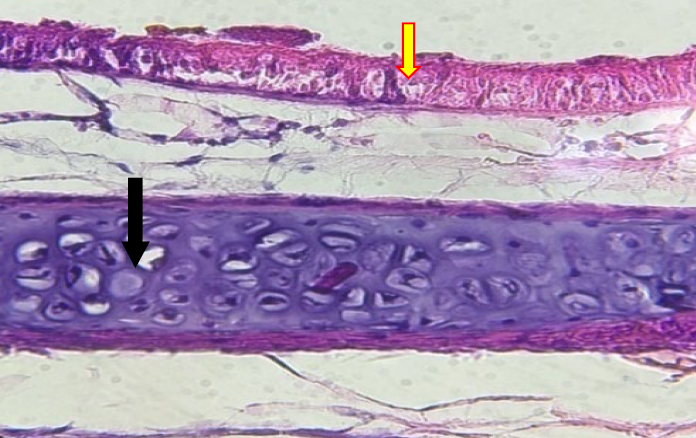 Figure 3. Histological sections of the trachea, the wall of the bronchus. The pseudostratified epithelial (red arrowhead) is taken pink color. The cartilage (black arrowhead) is taken purple color. H&E stain X400.
The left and right bronchus:
The lobar bronchus, segmental bronchus, subsegmental bronchus, conducting bronchiole, terminal bronchiole, respiratory bronchiole, alveolar duct, the alveolar sac, and alveolus are all found in the left and right bronchus, according to this study. Also, the trachea is the biggest tubular in the respiratory tract and is made up of hyaline cartilage tracheal rings. It divides into two major bronchial tubes, one on the left and one on the right. The bronchi are divided into smaller portions inside the lungs as tiny bronchioles. These bronchioles give birth to the alveoli, the air sacs in the lungs. The lung, which was suspended inside the pleural cavity of the thoracic cavity, was the biggest organ in the lower respiratory tract. Histologically the wall of the bronchus was lined by pseudostratified epithelial tissue with unicellular mucus cell (goblet cell) underlying loose connective tissue (lamina propria) based on the layers of the smooth muscle and submucosa consisting of denes irregular connective tissue richly with blood vessels and ducts of the seromucous gland, under it plates of hyaline cartilage that is showing in figure 4. The pulmonary artery was supplied to the bronchus, and it is branched into the left and right arteries of the bronchi. The bronchus was surrounded by a high amount of adipose tissue which was reduced with the lungs.

Figure 4. Histological sections of left bronchus A) Layers of the bronchus wall (red arrowhead)H&E stain. X100. B) the plate of the cartilage(red arrowhead)H&E stain. X100. C) lining by pseudostratified epithelial with goblet cells (red arrowhead) and the seromucous glands (blue arrowhead) H&E stain. H&E stain. X400.
The wall of the intrapulmonary bronchus:
In represent study that exposed the double layers of cartilage found in the wall of pulmonary branches is a unique character found only in rabbits which is present until the small bronchi.the little amount of adipose tissue around intrapulmonary bronchus comparative with bronchus. Draws attention the layer of hyaline cartilage that formed many layers, its considerably unique feature in branches in the rabbit that is showing in figure 8 . 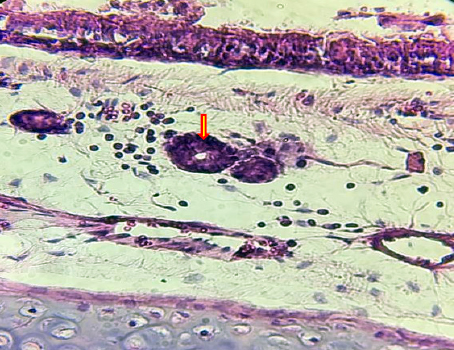 Figure  7. Histological sections of the left intrapulmonary bronchus contain ducts of the seromucous glands in the submucosa(red arrowhead). H&E stainX400.

Table 4. Shows the length and width of the Left lung, Right bronchioles, and respiratory bronchioles 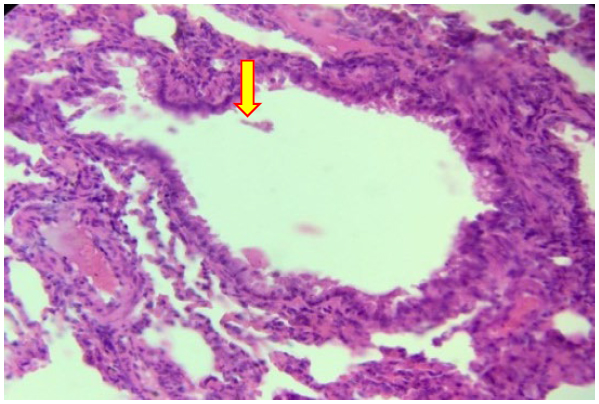 Figure 12. Histological sections of left lung A) the respiratory ducts and alveoli (red arrowhead). H&E stain. X100. B) the terminal bronchioles(red arrowhead). H&E stain. X100.
The alveoli of the lung
The alveoli have appeared as tiny airbags cutting-edge the parenchyma of the lungs. Also, continuous diaphragm contracts generated a negative pressure cutting-edge the thorax and air dailies into the full hollow. However, the sacs were fully air, creation the lung expanded more. Alveoli were very high through alveolar capillaries. At this time, red blood cells transport the oxygen from the air by oxyhemoglobin process toward nurture cells of the body. Then red blood cells likewise are carried carbon dioxide (CO2), missing as cells in the form of carboxy-hemoglobin, and released into the external environment by expiration. In addition, the diaphragm would be generated positive pressure cutting-edge thoracic hollow besides air dailies available of the alveoli ejecting carbon dioxide.