ABSTRACT
Available data indicate that food sodium (such as salt) is directly related to blood pressure (BP). The research aims to look at the different sodium consumption patterns of hypertension sufferers in two different coastal areas and highland areas in the Wakatobi Islands. The type of research is observational analytic research using a cross-sectional design. This study has been carried out in the District of Wangi-Wangi, especially in the MolaSamaturu villages and Waginopo Village in October 2019. The number of research samples is 100 people (50 respondents in Mola Samaturu Village and 50 people in Waginopo Village). The results showed the differences between sodium consumption patterns in hypertensive sufferers in Mola Samaturu Village and Waginopo Village with a p-value = 0,000 <α 0.05.  Sodium consumption patterns in coastal communities are higher than in highlands community.
Keywords: Hypertension, sodium consumption pattern, Wakatobi islands
INTRODUCTION
Hypertension is a significant risk factor for cardiovascular and cerebral vascular disease, also kidney failure. It is known that the amount of salt intake in meals plays a role in the pathogenesis of primary hypertension1,2,3. Increased sensitivity of blood pressure toward excess sodium affects 50% of patients with primary hypertension4,5. Salt dietary intake causes enhancement of blood pressure associated with kidney and cardiovascular diseases, including left ventricular hypertrophy and microalbuminuria6.
Sodium is the most cation in an extracellular fluid where 35-40% (60 mmol per kg of body weight) is in the skeleton, and a small portion (about 10-14 mmol / L) is in the intracellular fluid7. Under normal circumstances, sodium excretion in the kidneys is regulated to maintain a balance between intake and output, with extracellular fluid volume remains stable8. More than 90% of the extracellular fluid's osmotic pressure is determined by salt, specifically in sodium chloride (NaCl) and sodium bicarbonate (NaHCO3), thereby changing the osmotic pressure in the extracellular fluid represents changing sodium concentration9.
Increased sodium intake causes fluid retention of the body, which increases blood volume by pulling intra-cellular fluid into extracellular so that the heart should pump forcefully to drive large volumes of blood through narrowing of the intravascular space, which results in hypertension10,11. This was proven in a study conducted by Abdurrachim, Hariyawati, and Suryani12that there was a significant relationship between sodium intake with blood pressure in the elderly at TresnaWerdhanursing Home and BinaLaras Budi Luhur nursing home, Banjarbaru City.
Blood pressure is the bloodstream pressure in blood vessels and circulates in all tissues of the human body13,14. Blood pressure consists of 2 parts of systolic pressure and diastolic pressure15,16. Systolic blood pressure is defined as the pressure during heart contractions, while diastolic blood pressure is defined as blood pressure when the heart relaxes14.
The sodium content in foods dramatically varies and depends on the food source (e.g., animal foods source naturally contain more sodium) and the level of change that food itself goes through. Foods that are naturally low in sodium are fruits, vegetables, oils, and cereals, with the contents range from 20 mg up to 100 g7.
The Food and Agriculture Organization (FAO) and WHO recommends that the amount of salt consumption in the community is less than 5 gram a day because of the adverse effects of excessive salt consumption on health, especially on blood pressure and cardiovascular disease4,17.Based on data from National Basic Health Research in 2013, it was found that the prevalence of risky food consumption patterns, especially salty foods, was 26.2%, and Southeast Sulawesi was 11.5%18.
Geographically, the Wangi-Wangi Islands' position is surrounded by the sea of ​​Banda, where most of the people in the community earn a livelihood as seaweed farmers and fishers even though there are some villages that quite far from the coast with livelihoods as land farmers. This geographical position gives a plus and minus effect on the health of the Wangi-Wangi community, especially those living in coastal areas exposed to high salt or sodium consumption patterns.
According to Bustan, more people living in urban areas suffer from hypertension than people living in villages; furthermore, based on the geographical location where coastal areas have more hypertension than highland areas19. Research conducted by Setiawati on the coast of Manado Tua Island obtained a significant relationship between sodium intake and the incidence of hypertension20.
Based on the phenomenon, this study aims to determine differences in sodium consumption patterns of hypertensive patients in coastal and highland communities in the Wakatobi Islands.
METHODS
The type of study is observational analytic research using a cross-sectional design. This research has been conducted in the District of Wangi-Wangi, specifically atMolaSamaturuvillage and Waginopo Village, in October 2019. The study population comprises all people with hypertension who live in MolaSamaturu Village (124 people) and Waginopo Village (116 people), with 240 people in October 2019. The number of research samples was 100 people (50 respondents in MolaSamaturu Village and 50 people in Waginopo Village). The blood pressure variable is obtained by measuring using a blood pressure meter with hypertension criteria for hypertension sufferers is 140/90 mmHg (first-degree hypertension, second-degree hypertension, and third-degree hypertension). The sodium consumption pattern variable is obtained by measuring the consumption pattern using the Food Frequency Questionnaire (FFQ) then analyzed using a Nutri survey with a safe sodium consumption pattern standard (<2000 mg/day). The statistical test uses an independent t-test with a value of α = 0.05.
RESULTS 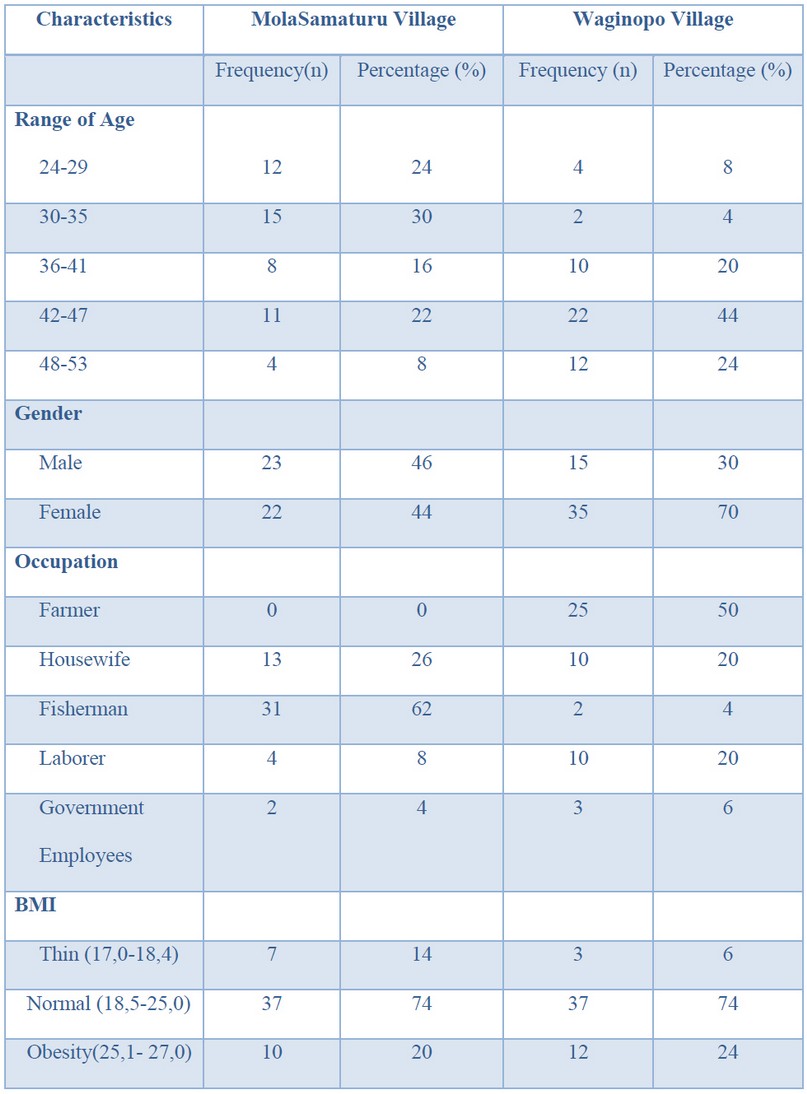 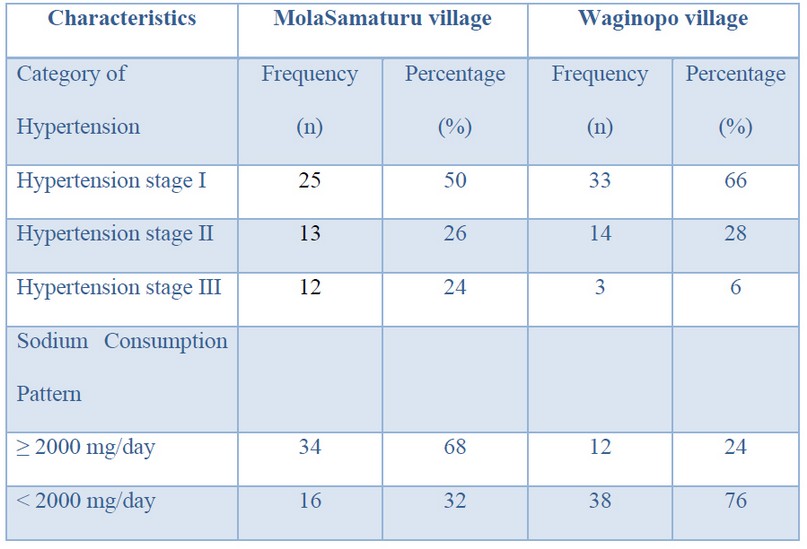 Table 2.  Distribution of variables
Based on table 2, respondents' characteristics in the category of hypertension in the MolaSamaturu village mostly in the stage I category with percentage is 50%, the same in Waginopo village that mostly is in the stage I as many as 66%. For the sodium consumption pattern variable, MolaSamaturu village with 68% is in ≥ 2000 mg/day category, while in Waginopo village mostly in < 2000 mg/day category with 76% of respondents (Table 2). 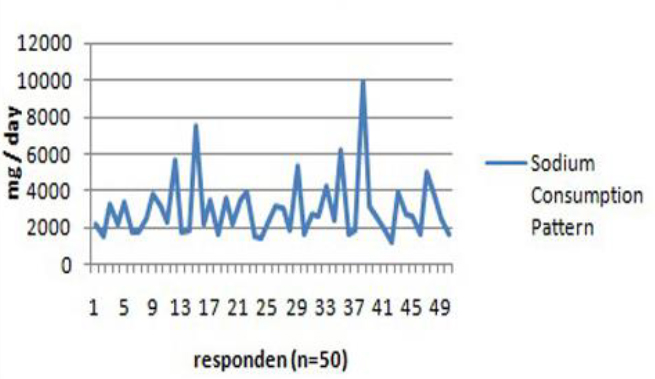