Suhaib Waad Oklah Musa1 , Ayad M. Gaidan2*, Reyam F. Saleh3
1 Department of Biology- College of Science - Tikrit University, Iraq e-mail: [email protected]
2 Department of Biology- College of Science - Tikrit University, Iraq
3 Department of Biology- College of Science - Tikrit University, Iraq; e-mail: [email protected]
*Correspondence: e-mail: [email protected]
Available from: http://dx.doi.org/10.21931/RB/2022.07.02.9
ABSTRACT
Immune checkpoints such as programmed cell death protein (PD-1) and autophagy-related protein 5 (ATG5) can directly affect the immune response and thus, interfere with infection with Mycobacterium tuberculosis (Mtb). This study aimed to determine the role of soluble ATG5 and soluble PD-1 proteins in tuberculosis (TB) patients. The study included a collection of 90 blood samples (47 samples from patients with confirmed tuberculosis and 43 samples from age and gender-matched healthy subjects to estimate the concentration of soluble autophagy (ATG-5) and programmed cell death protein (PD-1). Enzyme-linked immunosorbent assay was used to estimate the serum levels of these markers. The median value of ATG5 level in patients was 2.08 µg/ml, which is higher than the level of the control group (median = 0.93 µg/ml) with a highly significant difference. Similarly, the median value of PD-1 level in patients was 259.4 ng/ml (range 107.76-924.25 ng/ml), which was higher than that of the control (median = 146.4 ng/ml, range = 50.32-1117.1 ng/ml) and with a highly significant difference. It can be concluded that both soluble ATG5 and PD-1 increased significantly in patients with TB compared with controls.
Keywords: tuberculosis, M. tuberculosis, Autophagy, Programmed cell death protein-1
INTRODUCTION
Tuberculosis (TB) is considered one of the essential epidemic diseases, and it is caused by Mycobacterium tuberculosis (Mtb) which commonly attacks the lungs and other organs such as bones, lymph and joints 1. Patients often present with pulmonary symptoms such as a bloody cough (hemoptysis), chest pain and shortness of breath (SOB), and general clinical symptoms such as fever, poor appetite, weight loss and night sweats 2.
According to World Health Organization (WHO) statistics in 2018, one-third of the world's population is infected with MTB, 90% of whom have latent infection. With most severe cases are in developing countries. The prevalence is associated with poor treatment, drug resistance and limited vaccines 3.
Understanding the host response to Mtb infection is a critical factor in efforts to eradicate TB by developing effective vaccines and immune therapeutics. The ability of Mtb to survive and replicate in host macrophages is an essential step for its pathogenesis, with intracellular growth being often associated with virulence 4,5.
Autophagy is an intracellular self-digestion process whereby cytoplasmic constituents are delivered to and degraded by lysosomes 6. Besides being crucial for quality control and energy supply, autophagy plays critical roles in immune defenses against invading bacterial and viral pathogens, such as regulation of inflammation, antigen presentation and microorganism capture and degradation 7-9.
Programmed cell death protein 1 (PD-1) is a 288 amino acid cell surface molecule that has been designated as a membrane protein of the immunoglobulin superfamily in humans. This protein is expressed on T cells, pro-B cells, and myeloid-derived dendritic cells, leading to negative regulation of the proliferation and activity of these cells 10.
Increasing evidence suggests PD-1 expression 5and some autophagy proteins such as ATG5 are upregulated in patients with active TB 11-13. This study aimed to measure the serum levels of soluble PD-1 and ATG5 in patients with TB.
MATERIALS AND METHODS
The Study Population
The study involved 47 patients with TB attending the TB control center/ Baghdad during the period from 1st January 2019 to 31st October 2020. The TB diagnosis was made first with acid-fast stain (figure 1), then confirmed with culturing on Löwenstein–Jensen (LJ) culture and biochemical test specific for Mtb.

Figure 1: Acid fast bacilli of M. tuberculosis 100X.
Other age- and gender-matched 43 apparently healthy subjects where selected to represent controls. Blood samples were obtained from patients and controls. The sera were separated and stored at -20⁰C for immunological studies. Demographic data (age, gender, socioeconomic status, smoking habit) were collected from each participant through direct interview. The ethical committee approved the study of the College of Science, Tikrit University.
Serum Level of Soluble PD-1 and ATG5
Ready commercial kits (SunLong Biotech Co., LTD/ China) were used to measure serum levels of soluble ATG5 and PD-1 through enzyme-linked immunosorbent assay (ELISA). This assay is based on the presence of antibodies (for PD-1 orATG-5) attached to microliter wells. Soluble PD-1 or ATG-5 reacts with these antibodies. An enzyme-conjugated anti- PD-1 orATG-5 (horseradish peroxidase (HRP) is then added to the reaction. The enzyme acts as an amplifier of the detection signal by converting a substrate that results in color changes in the wells. The density of color is proportional to the serum concentration of PD-1 or ATG-5. The manufacturer's instructions were followed precisely. A fully automated apparatus read the results. These assays were performed at the Medical Research Unit, College of Medicine, Al-Nahrain University/ Baghdad.
Statistical Analysis
Statistical analyses were performed using SPSS software version 25.0 (SPSS, Chicago). Continuous data were subjected to a normality test (Shapiro Wilk test); Data with normal distribution were presented as mean and standard deviation and analyzed with a Student t-test. Data with non-normal distribution were presented as median and range and analyzed with the Mann Whitney U test. Categorical variables were expressed as numbers and percentages and analyzed with the Chi-square test. The receiver operating characteristic curve (ROC) was used to evaluate the diagnostic value of PD-1 and ATG5 in the discrimination TB patients and controls. A p-value less than 0.05 was considered to indicate a statistically significant difference.
RESULTS
Demographic characteristics of the study population
The mean age of the patients was 40.94 ± 16.79 years, which did not differ significantly from the control group (39.0 ± 16.21 years). Similarly, the distribution of females and males, the socioeconomic status and the percentage of smokers were similar between the two groups, with no significant differences. On the other hand, 25.53% of patients without comorbidities compared to 58.14% of the control group with a significant difference. In particular, the incidence of diabetes was higher in patients versus the control group (29.79% versus 13.95%)(Table 1). 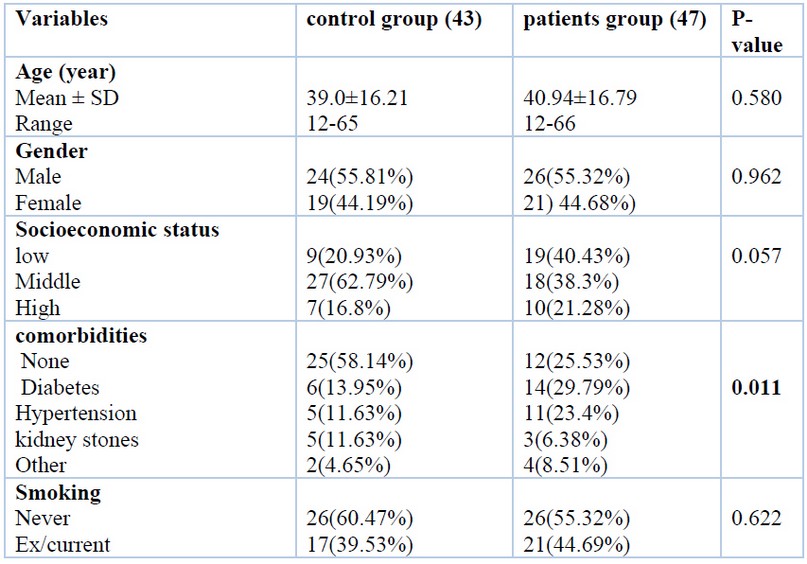 Table 1. Demographic characteristics of the study population
Serum level of soluble ATG5 and PD-1
Data regarding soluble ATG5 and PD-1 levels were found to be non-normally distributed. Accordingly, they expressed as median and range and analyzed with Mann Whitney U test. The median value of ATG5 level in patients was 2.08 µg/ml (range 1.1-4.06 µg/ml), which was higher than that of the control group (median = 0.93 µg/ml, range = 0.45-5.26 µg/ml) with a highly significant difference (Figure 2). 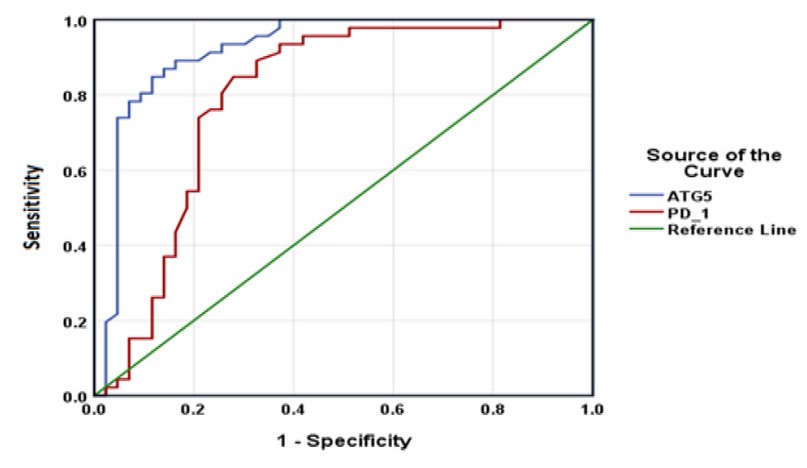