Figure 1. Shrimp hemocytes. (A) Transmission electron micrograph of shrimp hemocytes, bar = 2 m. (B) H&E staining of hemocytic nodule (star) in connective tissue of shrimp, bar 12 m. HH: Hyaline hemocytes, SGH: Small granular hemocytes, LGH: Large granular hemocytes.
A lower-than-normal number of circulating hemocytes in crustaceans correlates with reduced resistance to pathogens97, while an increase in the number of hemocytes enhances the immune response during periods of stress, increasing resistance to diseases 98,99. In addition, wound repair processes in shrimp are influenced by the concentration of hemocytes and penaeidins released by them in the wound area to eliminate invasive pathogens and improve hemocyte adhesion100. The open circulatory system of shrimp101 allows hemocytes to infiltrate and adhere to many tissues through the interstitial spaces of different organs and tissues without being limited to the vascular system102.
Hemocytic nodules, detected in connective tissue (Figure 1B), gills and hepatopancreas, are formed by numerous hemocytes that act synergistically to trap microorganisms or large antigens that cannot be eliminated by phagocytosis. These nodules undergo subsequent activation of the proPO system, with consequent melanization and destruction of microbes103 , such as the hemocytic nodules observed in tubules of the hepatopancreas of shrimp infected by vibrios18,104. If the lesions are very large, they will form hemocytic capsules like those observed around hepatopancreatic tubules injured by vibrios105. In shrimp, typical inflammatory response reactions with hemocyte infiltration and melanin deposition in nodules and capsules are observed during bacterial infections106 (Figure 2A). The respiratory burst, the mechanism that leads to the generation of reactive oxygen intermediates, is another microbicidal process used by shrimp hemocytes in phagocytosis and encapsulation107 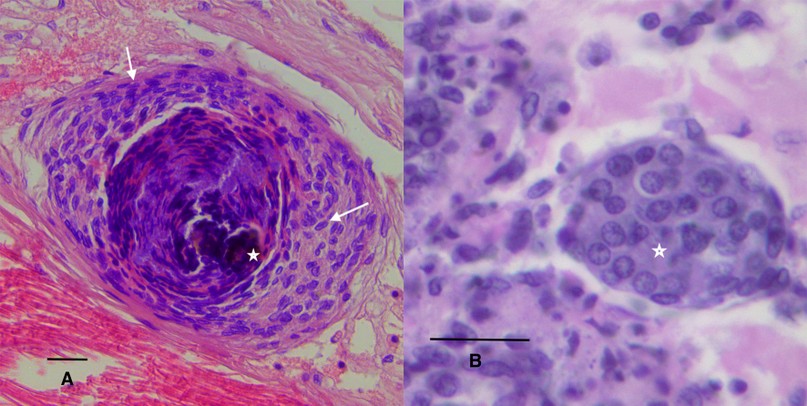 Figure 2: Histopathological signs related to bacterial and viral infections in shrimp. (A) Hemocytic nodule encapsulated in connective tissue. Note melanin deposition (star) and massive hemocyte infiltration (arrows), bar = 20 m. Source Marisol Morales-Covarrubias. (B) Spheroid (star) in the lymphoid organ of shrimp infected with WSSV, bar = 20 mm.
Other immune tissues
In penaeids shrimp, some of the defense functions are performed in the lymphoid organ (LO), which actively participates in capturing, isolating, and eliminating pathogens by phagocytosis108,109. The LO is a bilobed structure located in the anteroventral region of the hepatopancreas and posterior to the antennal gland, being an integral part of the distal portion of the subgastric artery110,111. The LO is considered an integral part of the circulatory system of penaeid shrimp and is believed to work as a hemolymph filter110,112. In histological sections it is seen as a vascularized tissue surrounded by hemal sinuses. The LO tubules have an inner layer of endothelial cells, surrounded by stromal tissue, bound by connective tissue109,110,113. In the presence of natural or experimental infections (mainly of viral etiology), nodular hyperplasia known as lymphoid organ spheroids (LOS) form (Figure 2B). These structures have also been detected in the connective tissues of other organs of shrimp and are called ectopic spheroids114,115. It has been reported that the LO filters viral particles of TSV114 and WSSV116. In late stages of infection, viral particles are detected in the spheroids of the lymphoid organ, whose cells enter apoptosis114,116. In addition to LOS, apoptosis has been reported in viral infections as a control mechanism of viral replication114,116. Other tissues involved in hemolymph clearance mechanisms are the heart reserve phagocytes, podocytes of the gills, and antennal gland117. The antennal gland is an important excretory organ in shrimp that is functionally similar to the kidney in vertebrates118,119, and therefore exposed to external medium.
Prophylactic methods to control vibriosis in shrimp culture
Vibriosis is the leading bacterial disease-causing mortality of cultured shrimp120,31. Antibiotics and chemotherapeutic agents were the first tools to control vibriosis. However, antibiotics have led to the development of resistant microorganisms121 with risk to human health due to the horizontal transfer of resistance genes from shrimp vibrios to human pathogenic bacteria122,123. The use of antibiotics also carries risks to the environment, due to the accumulation of environmental residues124. In addition, excessive levels of antibiotics can deteriorate the general condition of shrimp125 and cause rejection of the final product in international markets. Therefore, implementing effective and environmentally friendly multifactorial strategies for the control of vibrios in shrimp production systems is to be considered a priority126. These include the anti-virulence strategy127,128, which is based on blocking bacterial communication known as quorum sensing (QS), to inhibit the expression of virulence genes. The QS mechanism uses small chemical signaling molecules called autoinducers (AIs)129,130. This strategy has been applied in aquaculture and proposed by several authors as a promising tool for the control of pathogenic bacteria 128. Other alternatives to control vibriosis are the management of the microbiota, through probiotics  121,131,132 and immunostimulation31,133(Figure 3).

Figure 3. Approaches to control vibriosis in shrimp farming.
Probiotic
The term probiotic was defined by Fuller (1989)134 as "a live microbial food supplement that improves bacterial balance, benefiting the host's health”135. Probiotics emerge as a promising alternative to decrease the aquaculture industry's dependence on antibiotics 136. Probiotics have been applied in fish and invertebrate cultures137, especially in South America, Ecuador, and Asia, particularly China and India. Probiotics for aquaculture belong mainly to bacteria of the genera Bacillus, Lactobacillus. Pseudomonas, and vibrio, in addition to yeasts31,138,139.
In the field of aquaculture, the concept of probiotic is extended to “a live microbial supplement that has a beneficial effect on the host by improving the environmental microbial community, ensuring better use of the feed or its nutritional value, and improving the response to disease or the quality of culture environment”121. In addition probiotics can be applied directly to the culture water as bio remediators 140,141, the modes of action of probiotics are diverse142 (Table 1). Applied in feed, probiotics improve digestion, enhance immune response, and inhibit the growth of pathogenic bacteria143–145. Probiotics competitively exclude vibrios26,146,147 and enhance shrimp immune indicators, phagocytosis, nodule formation, activation of the proPO system and generation of AMPs148. Probiotics release several antibacterial agents with bactericidal or bacteriostatic properties that inhibit the colonization of pathogenic organisms in the shrimp gut149–151. Probiotics can modulate the expression of immune genes and gut microbiota during stress induced by high stocking density152. 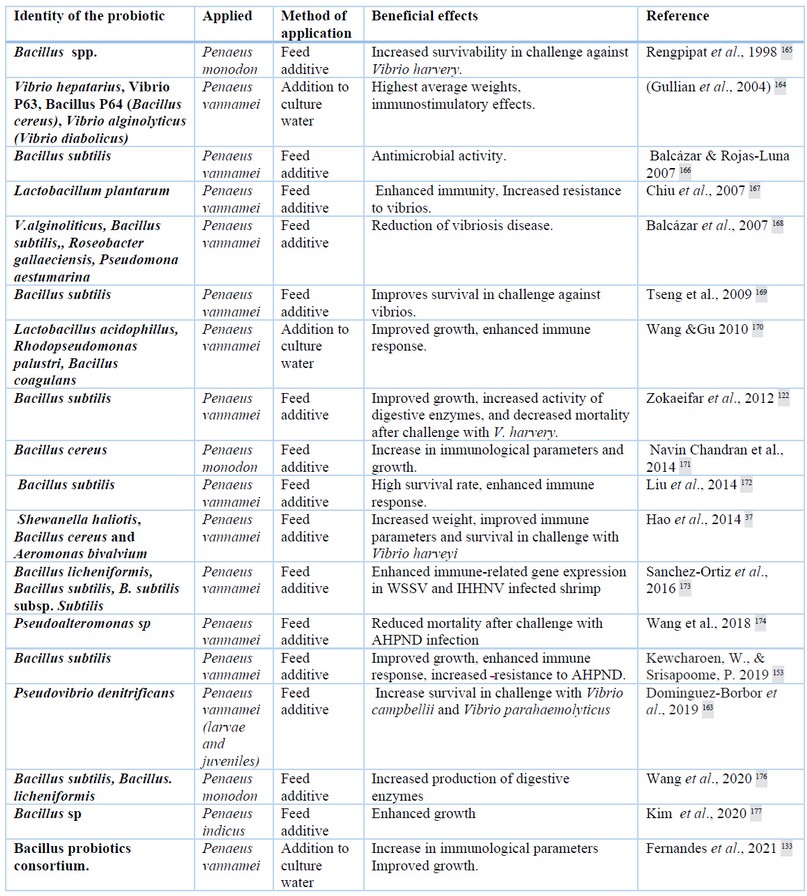 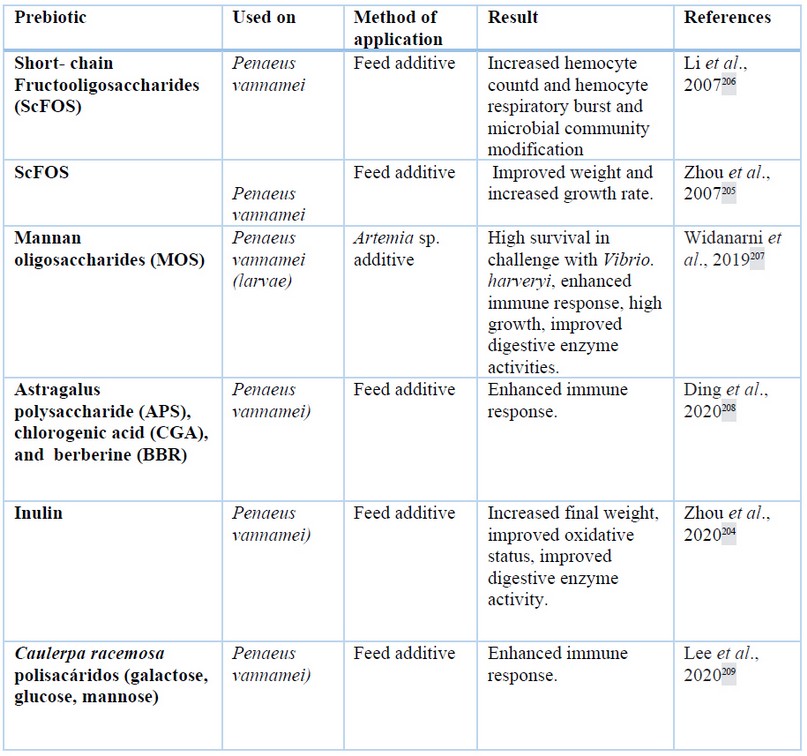