Previous / Index / Next
Detection of morphometrical, histological and histochemical characteristics of lung and trachea in adult local squirrel (Sciurus anomalus)

Figure.1. Gross anatomy of trachea and lung (A: dorsal view, B: ventral view) in female Squirrel Shows:
1-trachea.2-right apical lobe.3-right middle lobe.4- right caudal lobe.5-left accessory lobe.4-left  lung
Table 1 summarizes the cartilaginous rings that appeared as C-shape structures connected by tracheal muscle at the two ends.   The mean tracheal length in males was higher than that of females, and the mean number of tracheal rings was less than in females. The tracheal rings were rounded in shape or semi-circular in their cross-section. The length, and ring numbers in the cervical and thoracic region of the trachea, in males were higher than of females but not significantly. The mean tracheal and right principal bronchus diameters in males were higher than that of females, whereas the left principal bronchus diameter in females was higher than that in males. Significantly no difference between them at (P≤0. 05) in all anatomical parameters. Topographically, the trachea was separated into cervical and thoracic parts (Fig. 2).

Table 1. Morphometric measurements of the trachea of Squirrel in both sexes (Mean±SE). 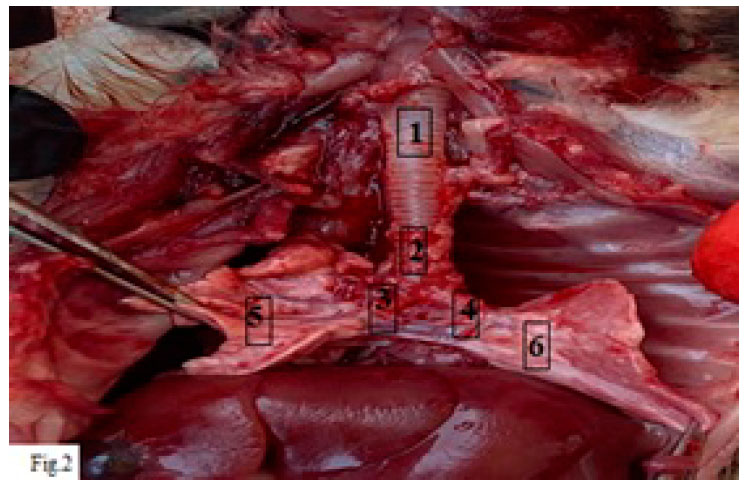 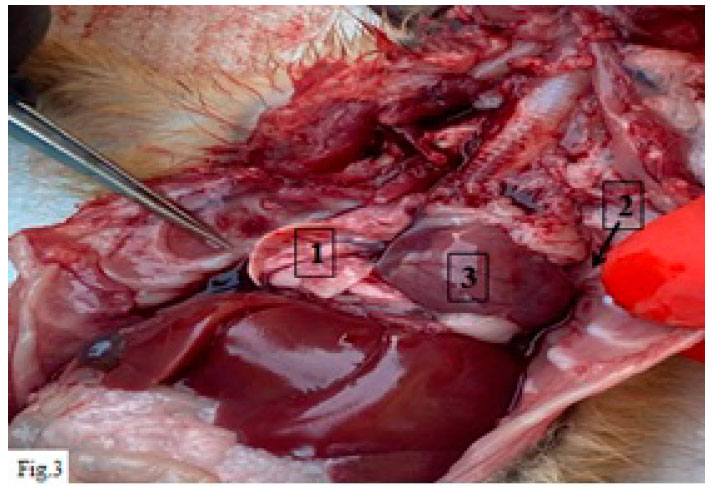 Figure 3. The gross anatomy of the male Squirrel trachea  Shows 1- Right lung. 2- Left lung,3- Heart.
The Lung
As in domestic animals, the lung in both sexes appear as two reddish pink spongy structures surrounding the heart, and their shape corresponds to the thoracic cavity shape (Fig.3). In both sexes, the right and left lungs have an apex, base, dorsal, ventral and caudal borders. The ventral and caudal edges were flatted and pointed, whereas the dorsal border was thick and rounded. The right lung apex was large and round, whereas the left was smaller and pointed. Both lungs have three convex and narrow surfaces; costal, medial and diaphragmatic. Interlobar fissures separated the lung into distinct lobes. The right lung contains apical, middle, caudal, as well as accessory lobes, which are partially divided into two small lobes (Fig. 3). Left lung is made up of one lobe only (Fig. 1). Currently, the lungs of both sexes do not have clear sub-pleural pulmonary lobules. The mean body weight, total lung weight, and right and left lung weights in males and females were listed in (Table 2). These measurements were higher in males than females but not significant at P≤0.05 (Table 2). There is no sign in the weights of the right and left lungs in males compared with females.

Table 2. Morphometric measurements (g) of the lung in both sexes of Squirrel (Mean±SE)
The corrosive cast technique displays the trachea and bronchial tree form that the trachea consists of left and right (principal or main) bronchi. The left spilled to the left apical bronchus and caudal bronchus for the left apical and caudal ends of the left lobe  (Fig. 4). The other main bronchi, right, observed to split into 4 bronchi as an accessory, caudal, middle and apical (Fig. 4). From the right primary bronchus, the first branch enter the apical lobe. Both central and accessory bronchus arise at the same level beyond the apical bronchus and join the middle and additional lobes, respectively. In contrast, the caudal lobe receives bronchi of the right caudal (Fig. 4 ). The bronchiole of tertiary and secondary arises from the division of tertiary and secondary bronchus, which arises from the right main bronchus. 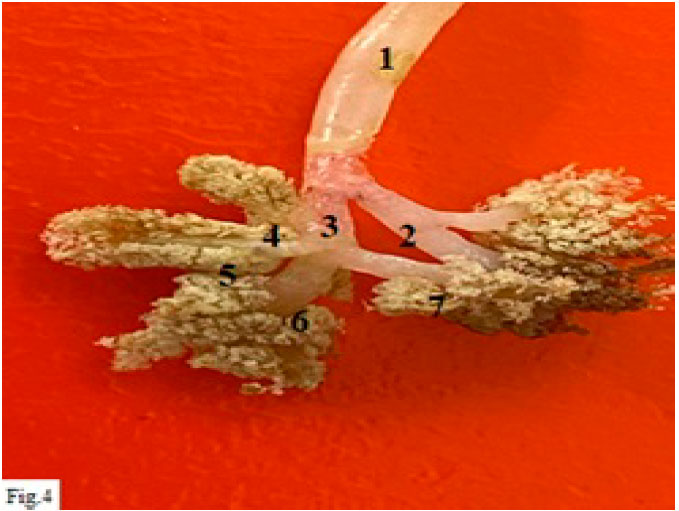 Histological Results
In both sexes, the trachea of Squirrel was conformable and appeared as a solid, hollow tubular structure consisting of the mucosa, submucosa, cartilaginous layer, and adventitia. The mucosa is lined by Pseudostratified ciliated columnar epithelial cells, which contain (ciliated columnar cells, goblet cells and basal cells) resting on the basement membrane. The main cell types were the ciliated columnar cells found as tall columnar cells with apical cilia. These cells were slightly stained cytoplasm and apical large oval nuclei (Fig. 5). Numerous goblet cells have global shapes and basally located nuclei. It gives a positive reaction towards PAS, giving a magenta color (Fig.6), due to its secrete a mucopolysaccharide substance. The mucous secretion may act as an epithelial protective barrier. The basal cells display small triangular cells resting on the basement membrane but don't reach the lumen. A thin, loose connective tissue layer made from collagenous and elastic fibers represents lamina propria. Muscular mucosa is observed as the very thin layer of smooth muscle fibers. 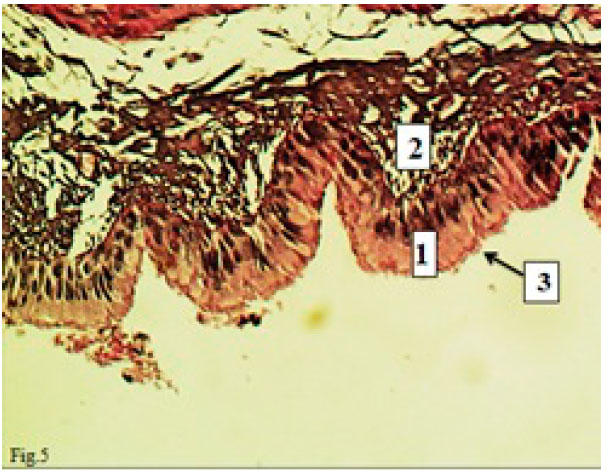 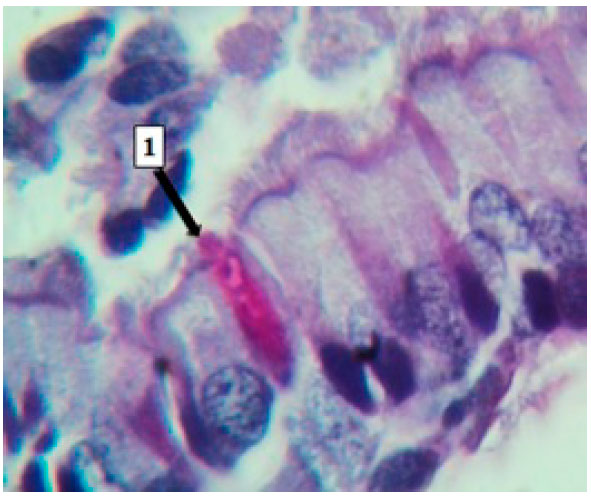 Figure 7. Histological section of the trachea in female Squirrel Show.1-Mucosa  2- Submucosa. 3-Hyalin cartilage. Submucosal glands absent.    H and E stain ( A:X 100, B: X400)
The cartilaginous rings were C-shaped, opened dorsally, and filled with connective tissue and a smooth tracheal muscle connecting the rings' outer side (Fig. 8). Tunica adventitia coated the cartilage and displayed a loose connective tissue. The tracheal bifurcation occurs at the carina forming the right and left, principal bronchi which histologically formed from; mucosa which covered with the epithelium of pseudostratified ciliated columnar, submucosa represented via loose connective tissue devoid of glands. The fibro-cartilaginous layer contains hyaline cartilage, and the adventitia is composed of loose connective tissue. The primary bronchi lead to the secondary bronchi and tertiary bronchi. The secondary bronchi were made up of folded mucosa coated by ciliated pseudostratified columnar epithelial cells with goblet cells which react positively towards the PAS stain. Thin lamina propria, bundles of smooth muscle fibers split up the lamina propria from the submucosa. The bronchial glands were absent. The tracheal and primary bronchi cartilaginous rings were replaced by separated hyaline cartilage plates in the secondary bronchi. Adventitia contains small blood vessels and is surrounded immediately by the lung parenchyma. The secondary bronchi lead to tertiary bronchi that are distinguished by the folded mucosa lined by simple columnar ciliated epithelial with goblet cells which react positively for the PAS procedure. The epithelium of smaller bronchi was low simple ciliated columnar epithelium. Lamina propria is made from elastic fibers, smooth muscle and connective tissue. Irregular hyaline cartilage plates smaller than those of the secondary bronchi (Fig. 9). 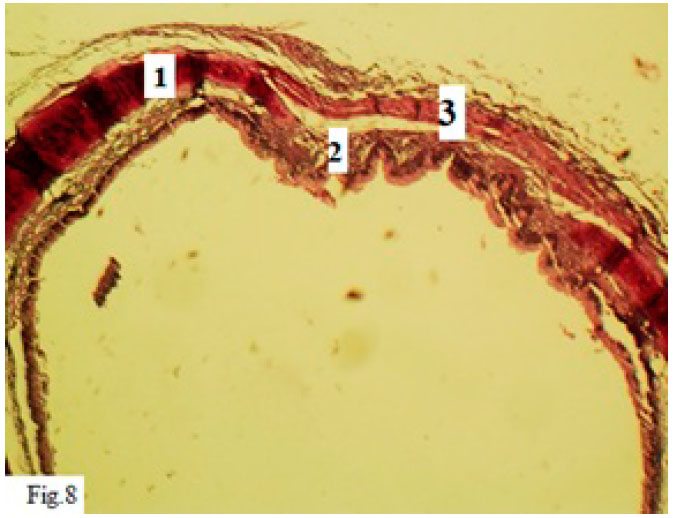 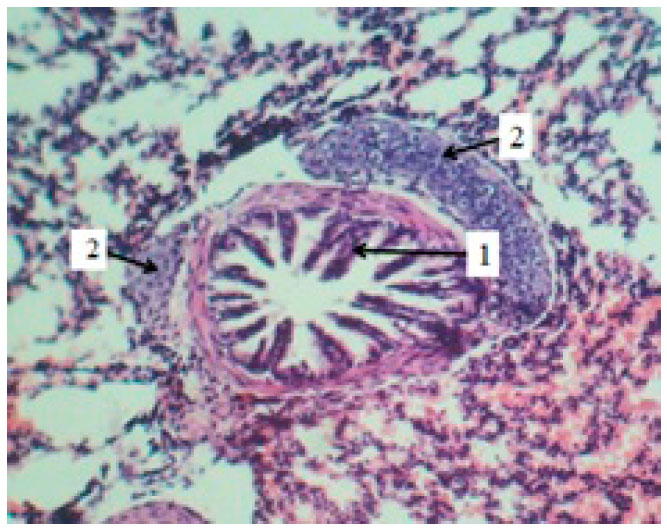 Figure 12. Histological section of the lung in female Squirrel shows 1- Respiratory bronchiole,    2-alveolar duct, 3- alveolar sac, alveoli (black star) A-H and E X40, B-PAS  X40.
The lung parenchyma of Squirrel was made of alveoli, interalveolar septa and blood capillaries; the alveoli appeared as small spherical air spaces lined by very thin epithelium consisting mainly of type I pneumocyte (simple squamous cells) with centrally situated nuclei. Another type of cell showed cuboidal to rounded scattered amongst the first kind named pneumocyte type II (Fig.13). The interalveolar septa was constructed of a single layer of epithelium and a skinny subepithelial layer of connective tissue fibers and blood capillaries. The visceral pleura was made of a thin connective tissue covered by mesothelium (Fig.14). The devastation of alveolar walls as local damage were characteristic features for parenchyma in the lung of studied squirrels.