Figure 1. The questionnaire structure, the number of questions, and answers are expected to be altered as SARS-CoV-2 management protocols evolve.
For the training of the neural network, a comma-separated file was used with the answers to the different questions and their resulting index (sample and known data) so that each line represents a training element. The questions used on this occasion and their weights are described in Table 1, it is very likely that as the knowledge of SARS-CoV-2 infection expands, the questions are shown as well as the associated weights will vary. This file should be in the same folder where the source code is located.

Table 1. Questionnaire for triage of the patient suspected of SARS-CoV-2 infection.
To train the neural network, the source code is executed with the interpreter, which will start the training process. The user can adjust the internal parameters of the program in terms of execution values according to his needs, considering that a neural network is a mathematical function that takes one variable and returns another, where both are considered vectors. The structure of a simple neural network is shown in Figure 2.
The connections between each neuron have a weight-adjusted by an iterative training process. Generally, there is a layer of weights between the input and output called the hidden layer. Additionally, the hyperparameters are variables that are defined before the training of the neural network; the way the network will be trained is defined by the number of hidden layers and the learning rate, while the structure is determined by the learning rate (which takes values from 0 to 1) and the decay gradient that is linked to a defined optimization function. 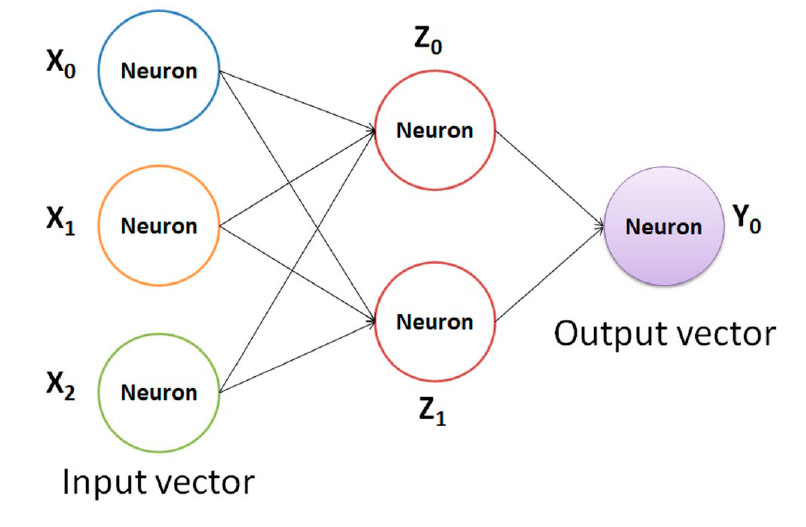 Figure 2. Structure of a basic neural network. The arrows indicate the connection of neurons.
The learning rate is the speed at which the model learns, which is linked to additional parameters that serve to refine the error distribution; this helps to update the weights of the connections between neurons each time the training is executed. Depending on the optimization algorithm, a decay of the learning rate may occur, varying during exercise; in other cases, it remains constant in each of the epochs (or training iterations). The important thing is to achieve that the learning rate has convergent values; this is the property of finite functions to get closer and closer to a limit when a variable of a function varies in terms of a series; this gives rise to the existence of the decay, to adjust the weights dynamically during training.
The neural network proposed in this paper uses the Adam (Adaptive moment optimization) optimizer,27 this algorithm implements a method that calculates individual adaptive learning rates for different parameters from estimates of the first and second moments of the gradients. This optimizer was chosen because it is simple to implement, is computationally efficient, has low memory requirements, and is suitable for problems that are large in terms of data. It is also ideal for non-stationary situations and issues with very noisy or sparse gradients.
Upon completion of the neural network training, several resulting files are obtained, which are described in Table 2. These files contain the variables, operations, network design and parameter values. The purpose of these files is to continue the evolution of the network by having a more significant number of data and parameters, including the possibility of implementing the training in a production application.
To evaluate the validity of our algorithm, different mathematical methods will be used. In the field of artificial intelligence and especially in the problem of statistical classification, a confusion matrix is a tool that allows visualizing the performance of an algorithm used in supervised learning. The benefit of a confusion matrix is to make it easy to see if the system is confusing classes.28 The ROC (Receiver Operator Characteristic) curve is a graph used to show the diagnostic capabilities of binary classifiers. It was first used in signal detection theory but is now used in many other areas such as medicine, radiology, natural hazards, and machine learning.
It is constructed by plotting the actual positive rate (TPR) against the false positive rate (FPR). The true positive rate is the proportion of observations that were correctly predicted as positive out of all positive observations, known as true positive (TP) and false negative (FN) derived from (TP / (TP + FN)). Similarly, the false positive rate is the proportion of observations that are incorrectly predicted as positive out of all negative comments as known as false positive (FP) and true negative (TN) derived from (FP / (TN + FP)). For example, in medical tests, the actual positive rate is the rate at which people are correctly identified to test positive for the disease in question.29

Table 2. Files resulting from the neural network training.
RESULTS
The results are presented as a comparison of the staff's diagnoses against what was obtained by the algorithm. This is to make evident the advantages of both diagnostic mechanisms.
Confusion Matrix
To verify that the classification algorithm has a performance that allows it to be used with sufficient confidence to aid in the triage of SARS-CoV-2 suspects, a tool is known as a confusion matrix was used.22 This is a technique for summarizing the performance of a classification algorithm; by calculating it, you can get a better idea of what is doing well and what types of errors are being made. It is important to note that the classification accuracy variable alone can be misleading if you have an unequal number of observations in each class.
By performing clinical auscultation based on the experience and memory of healthcare personnel in triage, taking a sample of 3256 people, of which 2241 were classified as not having the disease (true negatives (TN)), 670 were positive at the clinical level but were classified as negative (false negatives (FN)), 339 identified as positive (true positives (TP)) and of these 6 were negative at the clinical level but were erroneously classified as positive (false positives (FP)). The true positives were confirmed with laboratory analysis.
The data above showed an actual positive rate of 0.983, which indicates the ability of the algorithm used to correctly detect the disease; this is known as sensitivity. The actual negative rate is 0.770, which describes the ability to accurately identify healthy patients, called specificity. The false-positive rate is 0.230, and the false-negative rate is 0.017. The accuracy of this classification is 0.792. The specificity of this classification was 0.770.
By using the questionnaire together with the neural network, we proceeded to implement it to take a sample of 128 people independent to avoid data bias. They used the implementation of this neural network on a mobile application called Doctor 1847,30. They were followed up for a month and a half until they had a valid clinical test to confirm the pathology under study. Of these samples, 44 people did not have the disease, and the algorithm classified them as negative (true negative), six were positive at the clinical level, and the algorithm classified them as negative (false negative), and 76 coincided as positive between test and algorithm (true positive) and two were negative at the clinical level, but the algorithm classified them as positive (false positive).
Type I errors are equivalent to 7.68%, and Type II has a proportion of 3.84%; these values are low and result from good class balancing. This, together with the sensitivity of the questionnaire and the efficient design of the neural network algorithm, offers a viable solution for triage. Using the confusion matrix, the neural network showed a precision of 0.927, an accuracy of 0.938, a true positive rate of 0.974 (sensitivity), and the true negative rate is 0.880 (specificity). The false-positive rate is 0.120, and the false-negative rate is 0.026. The specificity of this classification was 0.880. Compared with the results of human triage, the use of the neural network has a better behavior.
ROC Curve
The ROC curve in our case shows the balance between sensitivity (or TPR) and specificity (1-FPR). Classifiers that give curves closer to the upper left corner indicate better performance. As a baseline, a Random classifier is expected to score points along the diagonal (FPR = TPR). The closer the curve is to the 45-degree diagonal of the ROC space, the less accurate the test will be. Note that the ROC does not depend on the class distribution. This makes it useful for evaluating classifiers that predict rare events such as disease or disaster. In contrast, assessing performance using precision (TP + TN) / (TP + TN + FN + FP) would favor classifiers that always predict a negative result for rare events.
To compare different classifiers, it may be helpful to summarize the performance of each classifier in a single measure. A common approach is to calculate the area under the ROC curve, which is abbreviated as AUC. It is equivalent to the probability that a randomly chosen positive instance will rank higher than a randomly chosen negative. A classifier with a high AUC may occasionally score worse in a specific region than another classifier with a lower AUC. But in practice, the AUC works well as a general measure of predictive accuracy. In Figure 3, you can see the behavior of the classification, with a better score of neural networks. In these results, the total sample, 3256 people, is considered. To these data, the neural network was applied and compared with the results of human triage. 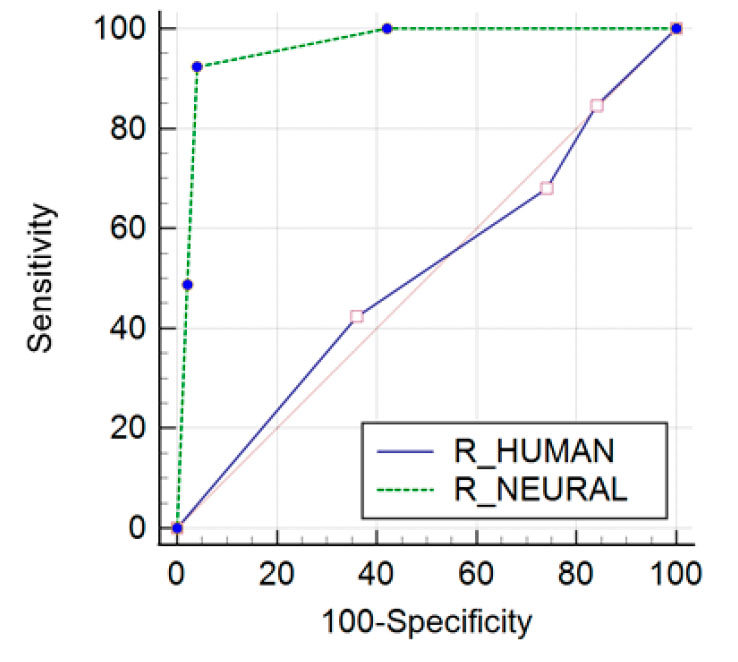 Figure 3. The sensitivity of the neural network R_NEURAL is higher than the human R_HUMAN. Care in triage using only the experience of health professionals was at the minimum acceptable.
The area under the curve (AUC) and standard error (SE) and confidence interval (CI) with better values using neural network (R_NEURAL); when comparing the statistics of both classification algorithms, their differences are marked since the sensitivity and specificity of the neural network exceed human capabilities. It is shown in Table 3 that there is a difference in the area under the curve of 0.455, and this value is supported by a standard error of 0.0545, indicating a low variance between the sample of each of the algorithms. The confidence interval is in the upper middle region of the AUC, with a minimum level of significance that invalidates a null hypothesis. SE was obtained using the DeLong method.31