×
Go to content
INVESTIGATION / RESEARCH
Previous/ Index / Next
Behavior of mean platelet volume in critical care patients with and without sepsis.

Pablo Andrés Vélez 1. Lucy Baldeón R 2,3 Jorge Luis Vélez-Paez1,2.
Available from: http://dx.doi.org/10.21931/RB/2021.06.02.22
ABSTRACT
The mean platelet volume is an anatomical biomarker that has shown its usefulness in various cardiovascular and metabolic pathologies; in sepsis, it has been positioning itself as an indicator of mortality, easily accessible and immediately applicable when reported in the routine blood count. This study demonstrates the mean platelet volume's biological behavior in critical patients with sepsis compared with non-septic patients. An observational, longitudinal, prospective, monocentric cohort study was conducted in 250 patients treated at the intensive care unit of the Pablo Arturo Suárez Hospital, Quito- Ecuador, from January 2019 January 2020. A group of patients with sepsis (n = 125) and without infectious pathologies (n = 125) were studied. The inclusion criteria were patients over 18 years of age of both genders, diagnosed with sepsis or septic shock using SEPSIS 3 criteria, and patients without septic pathology. The mean platelet volume (MPV) of days 1, 2, and 3 were studied. Septic patients had a mean APACHE (18.74 SD 9.52) higher than the non-septic ones (11.93 SD 7.01) (p = < 0.000). The MPV was consistently higher in patients with sepsis than non-septic patients, but it reached statistical significance on day 3 (9.13 SD 1.55 vs. 8.66 SD 1.34, p=0.042). The MPV on day 3 presented a significant area under the curve (AUC =0.580) (CI. 0.500-0.661), where the cut-off point according to Youden's index was positive for sepsis if MPV≥ 9.85 femtoliter (fL) with OR=3.30 and p-value= 0.005. Likewise, lactate on admission showed an AUC of 0.625 (CI. 0.555-0.694), with a cut-off point ≥of 1.15 mmol / L, OR=2.51, and p=0.007. Age and hypertension did not show a multivariate relationship with the presence of sepsis. It was shown that MPV is higher in patients with sepsis compared to non-septic ones. This observation reaches significance on day 3. Additionally, elevated lactate at admission was also associated with a septic state. On the other hand, platelet count did not show the expected behavior.
Keywords. Mean Platelet Volume, sepsis, mortality.
INTRODUCTION
Sepsis is defined as the unregulated response of the body to an infectious disease. Nowadays, this pathology is one of the main reasons for admission to the intensive care unit. There are still few strategies described to face it; however, it is known that an early antibiotic therapy, together with the adequate support of organ failure, are measures that reduce its pathophysiological impact and, therefore, its mortality 1.
Various biochemical markers (procalcitonin, C-reactive protein, and interleukin 6) and prognostic scales such as APACHE II and SOFA can determine this entity's severity. However, they are not always available in the daily clinical requirement, or their high economic value does not allow their routine use in low-income countries. Therefore, a new biomarker, such as the mean platelet volume (MPV), could become a practical and easily accessible tool to predict septic states.
Platelets are cell fragments from megakaryocytes, which are essential for blood clotting. The MPV is the measurement of platelet size and has an inverse relationship with the number of these; it is also an indicator of platelet activation 2, 3.
There is no fixed cut-off point for MPV because the values change and vary from population to population. They also vary according to the technique used to measure it (impedance or laser scattering), the type of anticoagulant used (EDTA or citrate), and the test time. However, it is established that values greater than 9.5 femtoliters (fL) are correlated with diseases related to inflammation, endothelial dysfunction, and pro-thrombotic states 1. Additionally, increased MPV has been reported to be associated with poor prognosis in patients with metabolic syndrome, diabetes mellitus, cardiovascular diseases, pulmonary embolism, smoking, and immuno-inflammatory diseases 2, 4, 5.
Van der Lelie et al. in 1983 reported that MPV increases in invasive infectious septic disease, but not in local infection and that this biomarker normalizes when controlling the disease 1. There are no studies that demonstrate that platelet size is higher in sepsis compared to other critical pathologies. Therefore, this study's objective is to demonstrate that mean platelet volume (MPV) is higher in critical patients with sepsis than non-septic patients.

MATERIALS AND METHODS
An observational, longitudinal, prospective, monocentric cohort study was conducted. The sample consisted of 250 patients treated in the intensive care unit of the Pablo Arturo Suárez Hospital in Quito, Ecuador, in the period January 2019 - January 2020. The sample consisted of two groups, patients with sepsis (n = 125) and patients with other non-infectious pathologies (n = 125). The inclusion criteria were patients of both genders, older than 18 years with a diagnosis of sepsis or septic shock who met the criteria of SEPSIS 3 [6] and patients with non-septic pathology such as preeclampsia, eclampsia, HELLP syndrome, acute pancreatitis, or cardiovascular diseases. Patients with neoplasms or acute bleeding states that can alter MPV were excluded. Patient data were coded, and the results of the routine tests requested were documented in the clinical history for the required variables (lactate, MPV, leukocyte count, platelet count, and procalcitonin) on days 1, 2, 3. The difference in MPV between patients with and without sepsis and the value that determined the progression to septic states was evaluated. The MPV was measured in a femtoliter by impedance in a Siemens machine, in venous blood collected in EDTA tubes. The data was coded and entered into a database, to which only the researcher has access. Analyzes were carried out with R and SPSS version 22 software. Qualitative variables were reported using tables and graphs representing absolute and relative values. Quantitative variables were represented as measures of central tendency and variability.
Inferential statistics were performed to compare the clinical characteristics and laboratory parameters between the sepsis and non-sepsis groups (bivariate analyzes). For categorical variables, the chi-square test was applied to compare proportions. For the analysis of quantitative variables, the assumption of normality was first verified. Thus, for variables that presented normality, a t-test was used. For the variables that do not meet the normality criteria, Mann Whitney test was used. Using the ROC Curve, the cut-off points for MPV and lactate significant in the bivariate analysis were determined, which were expressed as area under the curve (AUC). Besides, sensitivity, specificity, positive predictive value (PPV), negative predictive value (NPV), and Odds Ratio (OR) were determined for each cut-off point. A multivariate logistic regression analysis was performed to determine the relationship of sepsis using the OR. Statistical significance was established for the value of p <0.05; the OR was considered significant, observing the limits of the 95% confidence interval. It was considered a risk factor if the lower limit was more significant than one.
ETHICAL CONSIDERATIONS
Researchers have followed the bioethical principles of human research. The data were obtained from medical records (secondary data), the identification of patients will not be disclosed, and they have been recorded to avoid their recognition. The authors obtained the authorization for publication. 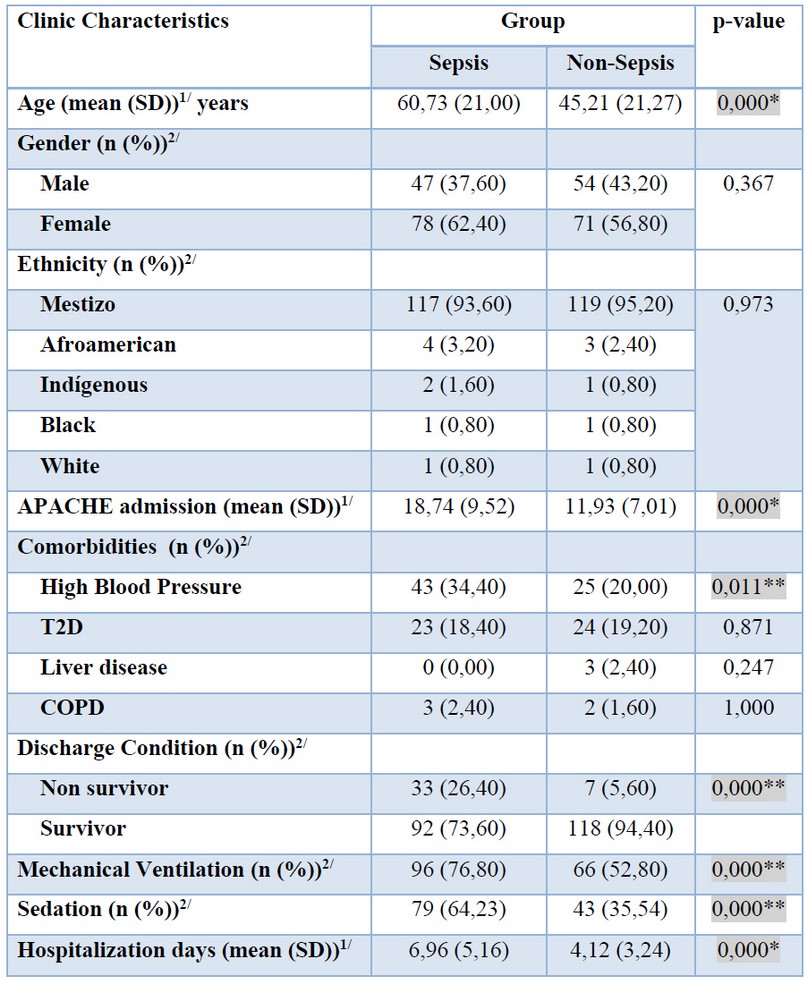 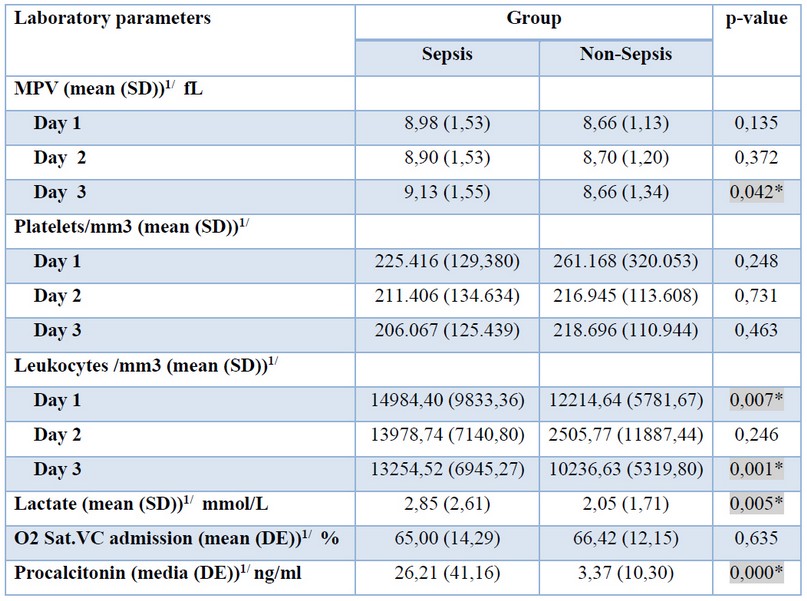 Table 2. Comparison of laboratory parameters by sepsis and non-sepsis group.
Also, a graph was made to compare MPV values in survivors and non-survivors patients with and without sepsis, in whom platelet size superiority is evidenced in all measurements. (Figure 1) 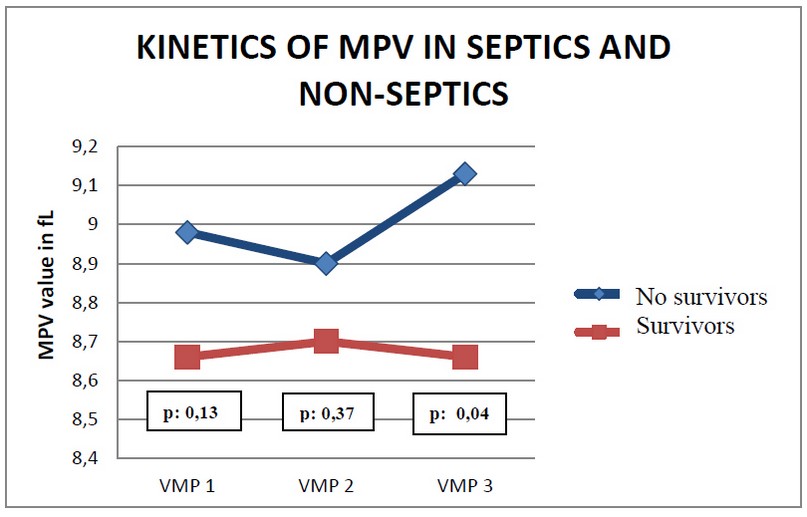 Figure 1. MPV kinetics from day 1 to day 3 in septic patients that survive and no-survive.

For the variables MPV on day 3, at discharge, and lactate at admission, which were significant in comparing the sepsis and non-sepsis groups, the cut-off point was determined using the ROC curve.
The MPV at day 3 presented a significant area under the curve (AUC) of 0.580 (CI 0.500-0.661), where the cut-off point according to Youden's index was positive for sepsis if MPV ≥9.85 fL. Similarly, lactate on admission was significant with AUC 0.625 (CI 0.555-0.694), with cut-off points 1.15 and 1.25 to predict sepsis. Of these points, the one that showed relevance in the statistical tests and was positive for sepsis was lactate ≥1.15 mmol / L. (see Figure 2.) 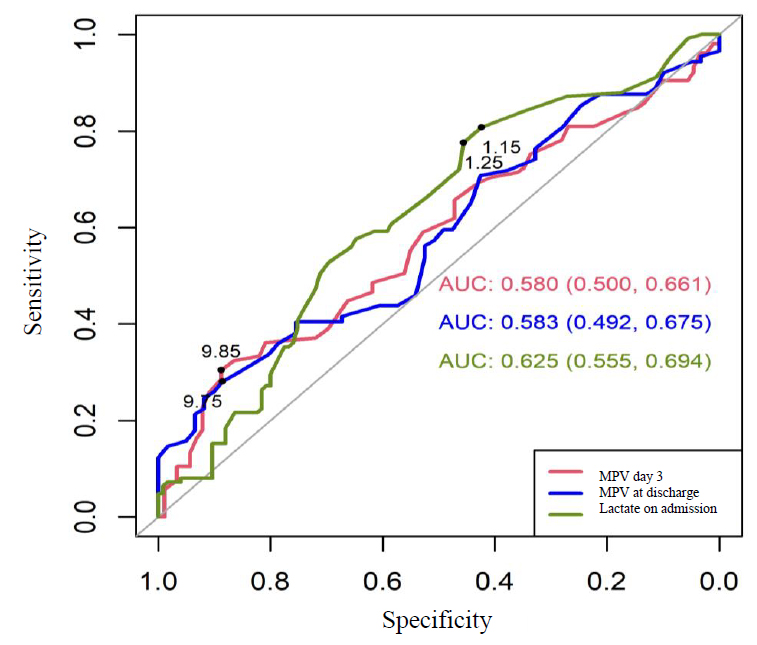 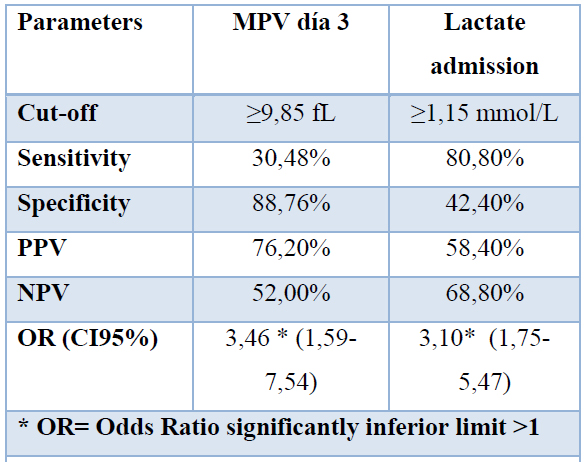 Table 3. Sepsis predictor parameters by cut-off points for MPV at day 3 and lactate on admission.
Logistic regression was used to determine the multivariate relationship of sepsis with the cut-off points of the MPV on day 3 and lactate at admission and the clinical characteristics of age (median 55 years) and comorbidity due to HBP, which were significant in the bivariate analysis.
The results showed that the MPV (≥9.85 fL) on day 3 (p = 0.005) and lactate at admission ≥1.15 mmol /L presented a multivariate relationship with sepsis. Patients with MPV on day 3 ≥9.85 fL are 3.30 times more likely to present sepsis, while patients with lactate on admission ≥1.15 mmol / L are 2.51 times more likely to present sepsis. Age and HBP did not show a relationship with the presence of sepsis.

Table 4. A multivariate relationship for sepsis.