Manuel A. Andino-Enríquez 1 , Sandra P. Hidalgo-Bonilla1, Luis A. Ladino2,*
Available from: http://dx.doi.org/10.21931/RB/2018.03.02.5
ABSTRACT
In recent decades, problems related to anthropogenic activity have generated concern due to the accumulation of pollutants in the air, resulting in changes in the concentrations of greenhouse gases and particulate matter. In Ecuador and the rest of the world, air pollution represents a risk and a threat to health and the environment. To carry out an analysis on this subject, it is necessary to develop a dynamic process, followed by a permanent effort that allows improving the quality of the information. The studies developed in Ecuador on pollutant emissions are carried out since 2010; however, there are no comparisons made on this issue in the global context, which leads to the inability to make a real assessment of the air quality situation in the country, as well as the consequences that may result from not doing it. Thus, the main objective of this project is to analyze the concentration levels of NO2and O3 tropospheric in Ecuador and make a direct comparison with different cities around the world. Resulting that concentration of study gases varies with the number of the population of a sector in addition to the pollution that it produces.
In order to develop this research, the information collected comes from the World Meteorological Organization, belonging to WHO WDCGG DATA SUMMARY (World Meteorological Organization World Data Center for Greenhouse Gases) of the year 2015, while the data of the study cities of Ecuador (Ibarra and Quito) were provided by the municipality of Ibarra and by the Municipality of the Metropolitan District of Quito respectively.
Keywords: Anthropogenic pollution, nitrogen dioxide, tropospheric ozone, concentration of atmospheric gases.
INTRODUCTION
In recent decades, pollution problems due to the development of human activities have led to an increase in the concentration of greenhouse gases in the planet's atmosphere. Atmospheric pollution implies changes in the physical, chemical, and biological characteristics of atmospheric components, which can impair the health and survival of living beings 1.
The surface of the earth has had great natural temperature changes over the last 10000 years, which even surpass the current values. However, since the Industrial Revolution (1750) there has been a continuous and uncontrolled increase in the heating of the surface of the Earth due to the rise of the concentration of greenhouse gases as a result of anthropogenic pollution 2.
The sun is the greatest source of the radiation that Earth receives, transmitted by electromagnetic waves. When solar radiation comes into contact with the Earth's atmosphere, part of this radiation is absorbed by the earth's surface and then re-emitted as infrared radiation (IR). A fraction of the solar radiation and IR radiation is absorbed by the atmospheric components which result in an increase in the temperature of the planet. In the same way, part of the solar radiation is reflected back to space by clouds, aerosol particles, the atmosphere, and by the same terrestrial surface, which results in a cooling of the terrestrial surface 3. In order to maintain a stable temperature and climate, the Earth must have an energetic balance between the radiation it receives from the sun and the IR radiation it emits into space. This balance is known as effective temperature 4. When the IR radiation emitted by the earth is trapped (absorbed) by greenhouse gases, it is irradiated back to the terrestrial surface, resulting in the heating of this. This phenomenon is known as the greenhouse effect 4. The capture of terrestrial radiation by greenhouse gases is essential to maintain a temperature of the terrestrial surface sustainable for life since otherwise, the Earth's temperature would be near freezing point -18 °C 4. The problem arises because of anthropogenic pollution, as the uncontrolled emission of greenhouse gases can induce faster heating of the surface of the Earth. Currently, efforts to reduce its speed or magnitude have given moderate results but have failed to reverse adverse environmental changes 5.
The most common greenhouse gases are carbon dioxide (CO2), tropospheric ozone (O3), water vapor, and methane (CH4). Due to human activities, their concentrations have increased 6. The most tangible example is reported by CO2 as illustrated in Figure 1. 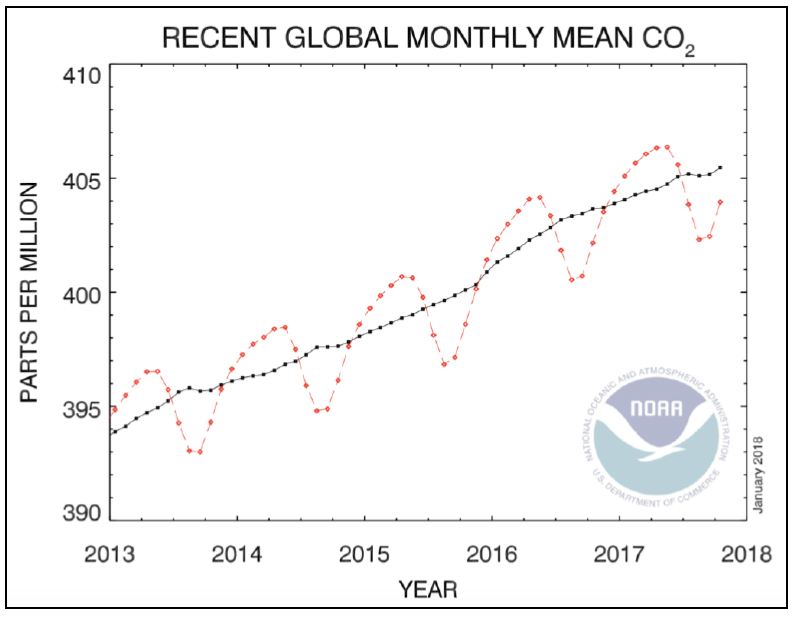 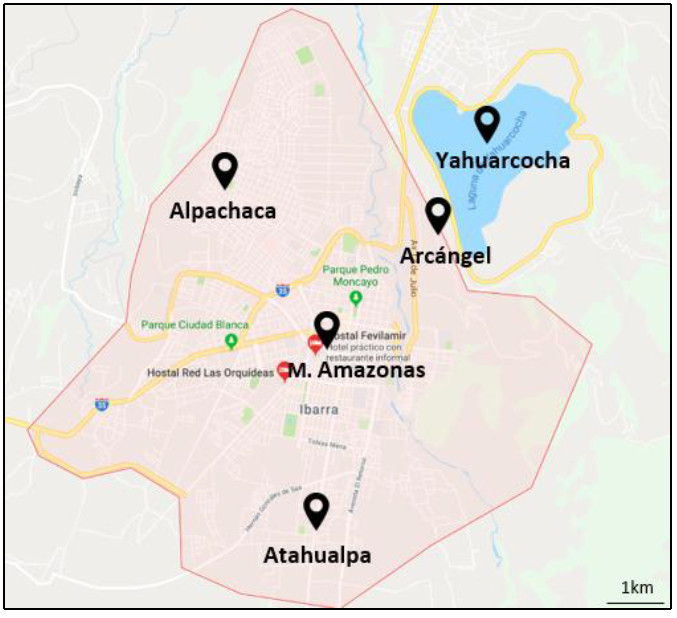 Figure 2. Map of the tropospheric ozone stations in Ibarra
Figure 2 shows the location of the stations in the city of Ibarra, on the outskirts and in the center of the city. The shortest distance between stations is about 2 km, while the farthest is approximately 4 km. Unfortunately, the data provided by the municipality of Ibarra do not detail the equipment used for the data taking of tropospheric O3.
RESULTS
Nitrogen Dioxide 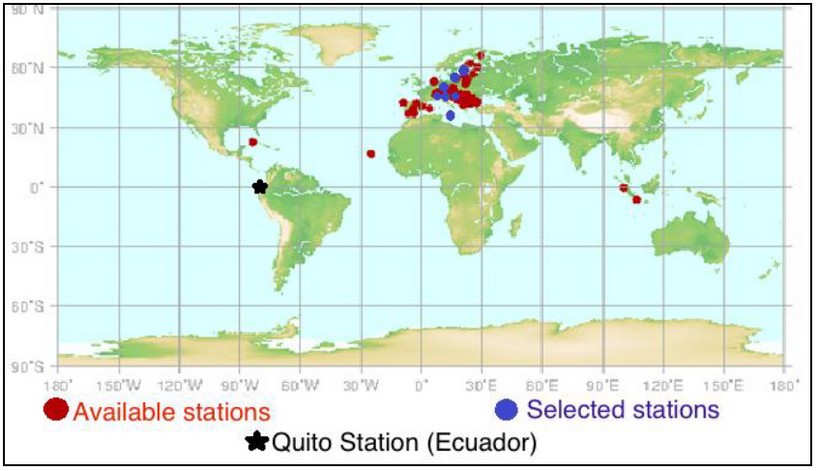 Figure 3. Selected NO2 Stations 2
Figure 3 shows the stations selected for nitrogen dioxide. Red marks represent all NO2 stations available from the WDCGG (World Data Centre for Greenhouse Gases). From there, the stations selected for the study of this gas are marked in blue. The exception is that the stations of Ecuador (Quito and Ibarra) are not part of the WDCGG. The hypotheses posed were:
·         Air currents influence the concentration of nitrogen dioxide in a city/region.
·         The concentration of nitrogen dioxide is proportional to the increase in the population of a city/region.
As can be seen in Figure 3, among these selected stations are those of cities of the following countries: Latvia, Switzerland, Poland, Hungary, Czech Republic, Slovenia, Malta and Ecuador 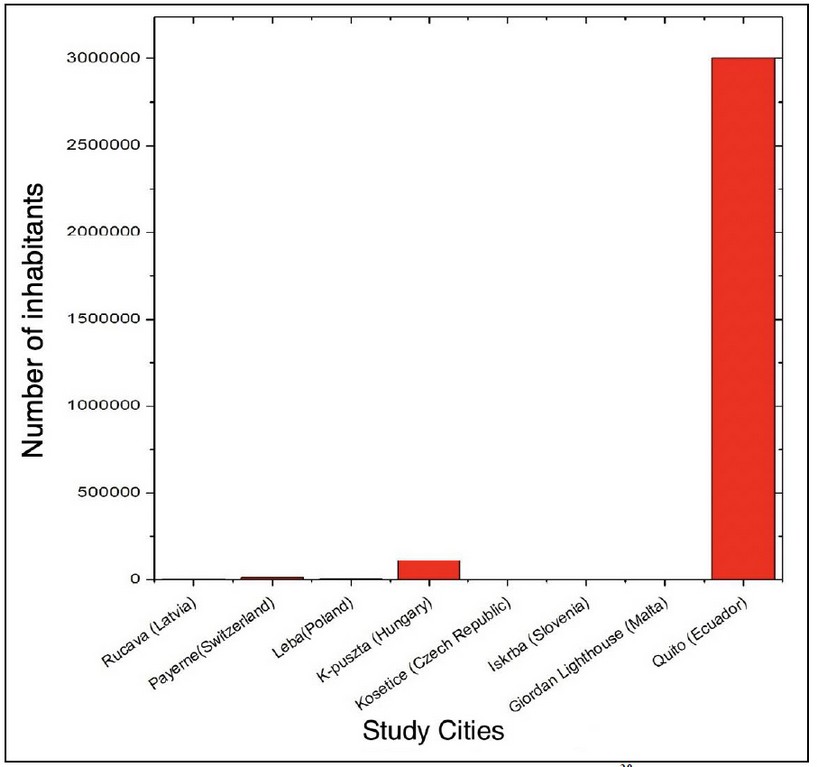 Figure 4. Population in the cities of study for NO2 28 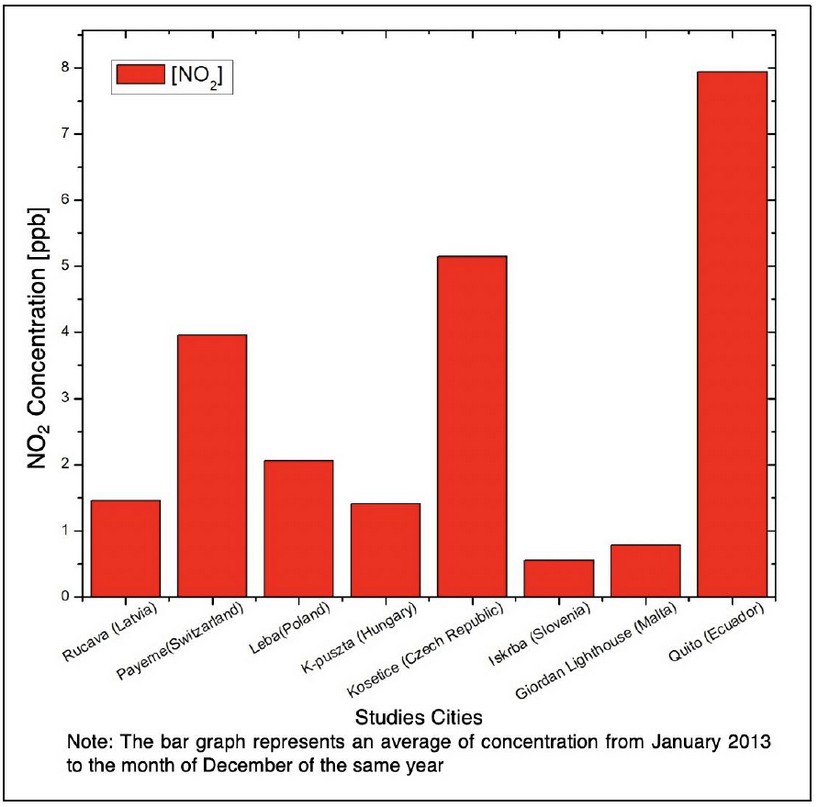 Figure 5. Comparison of NO2 concentration in selected stations

Table 1. Standard deviation of the concentration of NO2 and O3 in each study station

Figure 6 shows that during the time of the study, the levels of nitrogen dioxide for the city of Quito were higher during the majority of months compared to the other cities of study, showing that the population of that city produces an excessive emission of this gas, which is very alarming. In the same way, Figure 6 shows the trend line of each study city, presenting the monthly values of NO2 concentration. If the trend line over the time of study is high, then the city of study produces a considerable emission of NO2 regardless of the number of its inhabitants, such as the City of Kosetice (Czech Republic) which has little population density (Figure 4) but produces a high amount of NO2 that emanates into the atmosphere. The trend line of the city of Quito shows lower values mid-year and the highest values at the end and beginning of the year. This is because in mid-year there is more radiation in Ecuador so, the NO2 with solar radiation from O3 tropospheric, lowers the concentration of NO2 present in the city of Quito. On the contrary, at the end of the year, solar radiation is not as intense compared to mid-year months, which allows not to produce so much tropospheric O3, increasing the concentration of NO2.
According to WHO, the permissible levels of nitrogen dioxide concentration correspond to 40 μgm-3 (21.27 ppb), so the concentration of nitrogen dioxide in the city of Quito is below the limit value according to WHO standards. However, according to the data obtained, the concentration of this gas in the city of Quito is the highest of all, so it is recommended to reduce the burning of biomass (both natural and anthropogenic fires) as well as the burning of fuels as these activities are most likely the main cause of the level of concentration of this gas.
Tropospheric Ozone 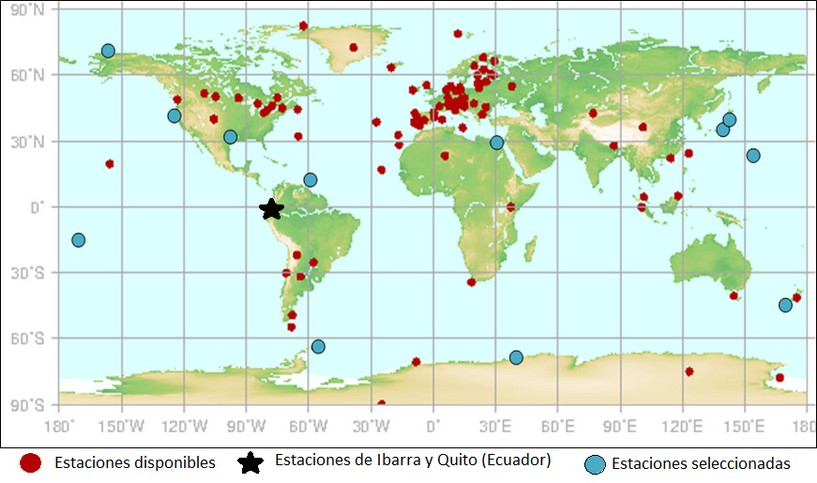 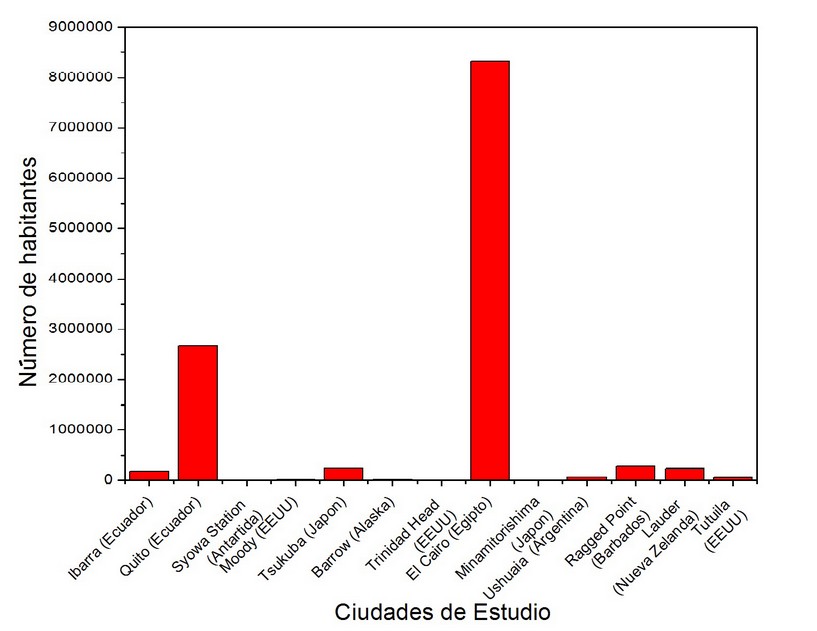 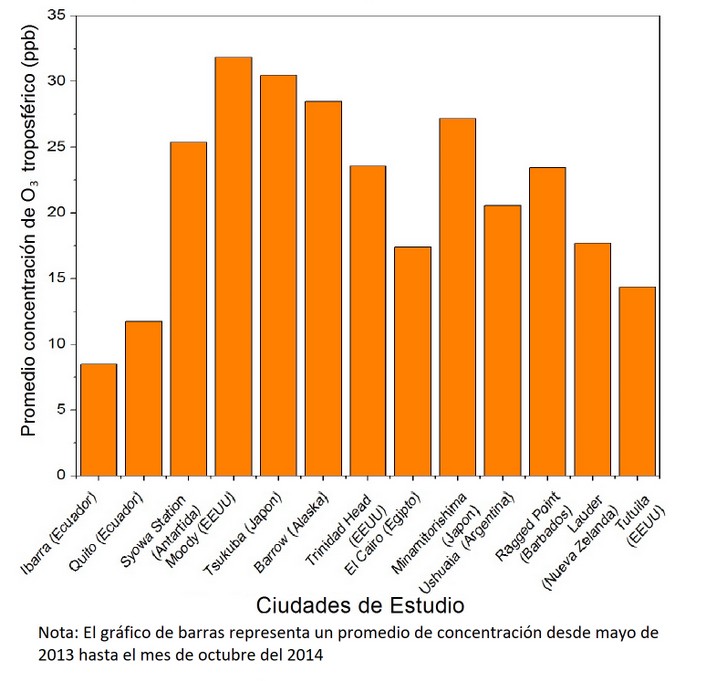 Figure 9. The average concentration of tropospheric O3 in the cities of study 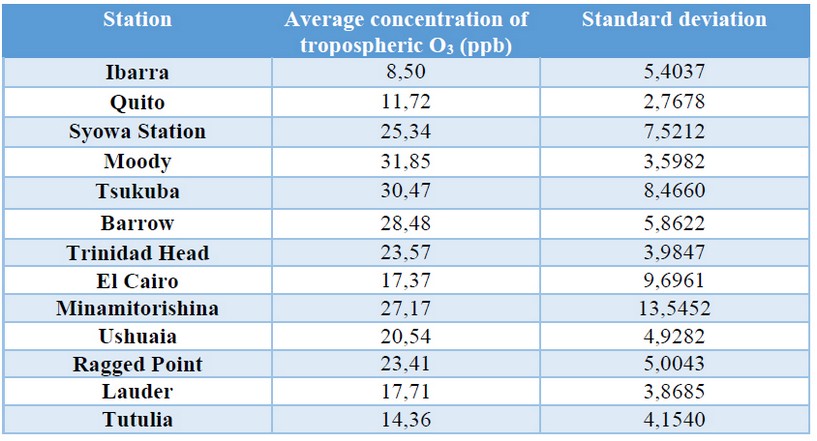 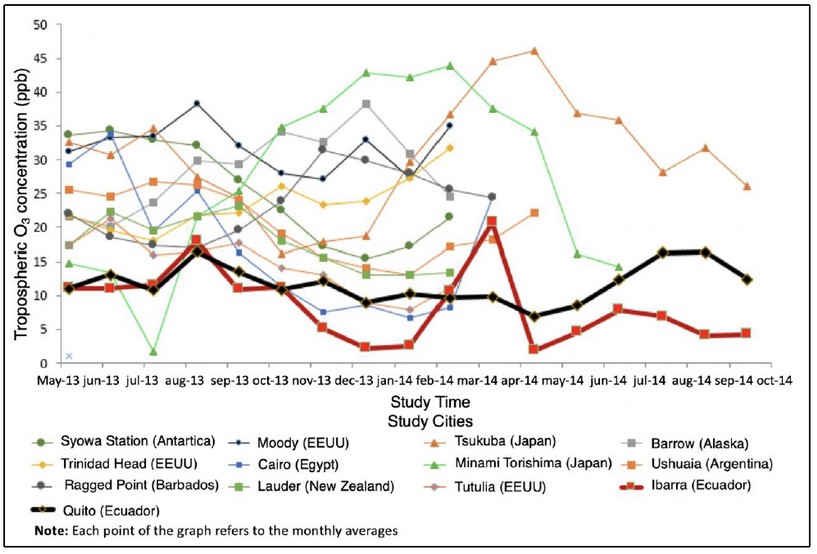 Figure 10. Comparison of levels of concentration of tropospheric O3 in Ecuador and the cities of study, year 2013
Figure 10 shows the monthly measurements of this greenhouse gas from the stations selected during the study time. However, some stations do not have data from February because they suspended their activities during that time. The tendencies of concentration of tropospheric O3 of the Ecuadorian stations show the lowest values of the different cities analyzed. This is something surprising given its geographical location. Ecuador receives high levels of solar radiation with very few fluctuations over the year due to its latitude. However, solar radiation is not the only necessary component for the formation of tropospheric O3. From these data, it can be concluded that the concentration of precursors of tropospheric O3 (VOCs, NOx, and secondary organic aerosols or SOA) is very low or that it is much lower than in the other cities of study. With regard to the different stations studied, there is no clear annual trend of O3. This is because the cities of study are located at different latitudes, where depending on the time of year, they receive more or less radiation. In the case of Ecuador, a quasi-constant concentration of 10 ppb is observed.
O3 Trends in Ibarra 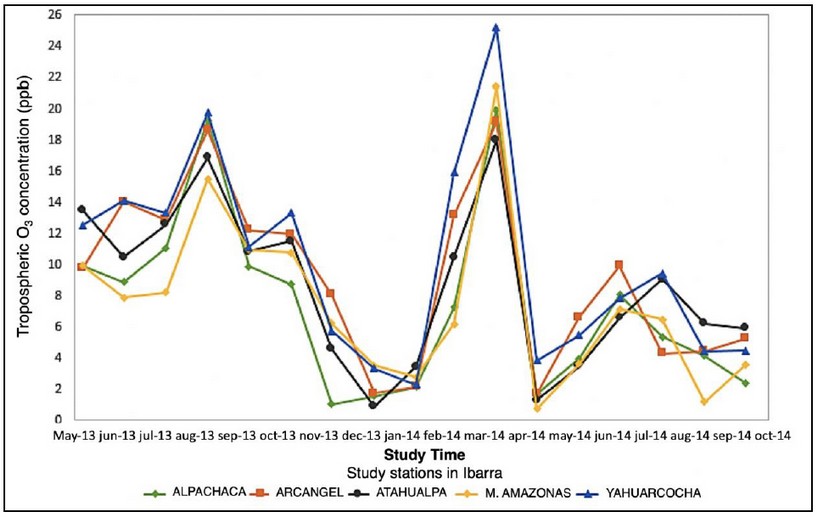