The letters in superscript mark the significant difference among the different breeds for each parameter following the post hoc Duncan’s test.
Table 2. Individual spermatozoa motility, spermatozoa viability and morphological abnormalities of the selected bull semen used for artificial insemination programmes in Algeria. 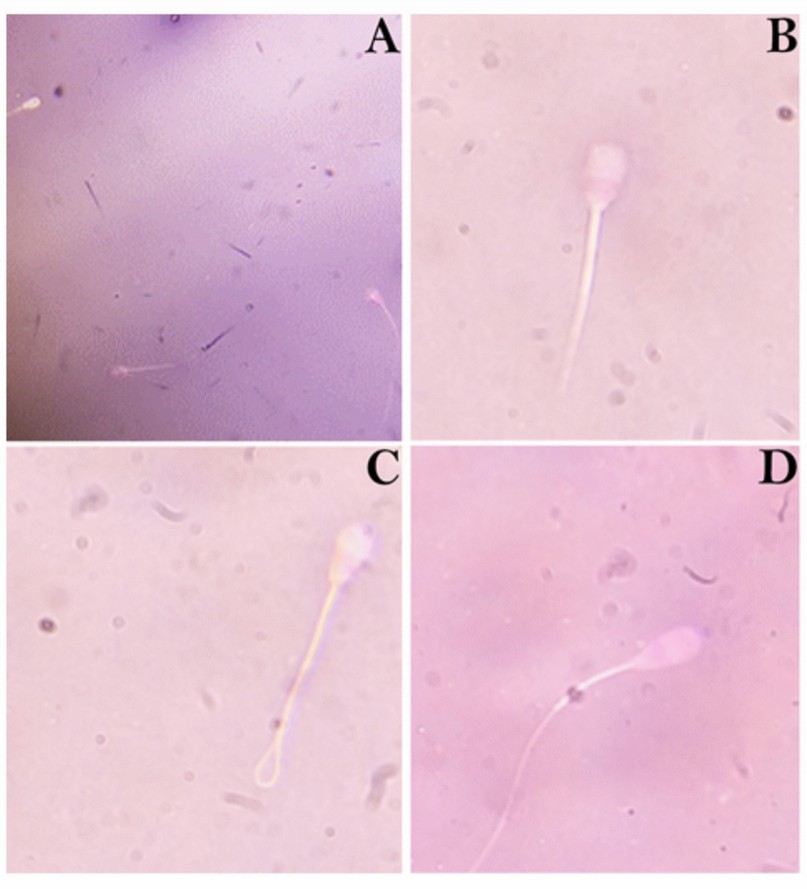 DISCUSSION
Artificial insemination is widely practiced as reproductive biotechnology to manage a large number of cows reducing animal handling and labor 12. The present study aims to assess the rate of success of the artificial insemination program on the most common cattle breeds raised in the arid region of Tiaret (Algeria) throughout field monitoring carried out for almost five consecutive years. In addition, the quality of the commercialized bull semen was also evaluated to examine its effects on this operation.
Several factors might determine the success rate of bovine artificial insemination programs, such as female physiology, cattle breed, suckling, size of ovulatory follicle and timing of insemination 13. The obtained results revealed a high percentage of normal calving in red and white Holstein breeds. However, the percentage of embryonic mortality and/or calving with malformation was higher in the Montbéliarde breed.
It should be noted that embryonic mortality is very difficult to diagnose since it can generally be infectious (less than 30%) and non-infectious (more than 70%) causes 14. Uterine contamination by pathogens leads to endometritis and might also induce a direct cytolytic effect on the embryo, systemic effects via septicemias, viremias or toxemias on the dam 15. Viruses, bacteria, protozoa, and probably mycoplasma pass in the uterus through the hematogenous way or the vagina. However, non-specific pathogens, primarily bacteria, enter the uterus by ascending infection. Furthermore, non-infectious causes of early embryonic death are chromosomal aberrations or external factors, e.g., high ambient temperature, nutritional factors and maternal factors 16.
The Montbéliarde breed belongs to the group of Pie Rouge breeds (Simmental and Fleckvieh families). In addition to its milk and meat being highly appreciated by consumers, Algerian farmers prefer to raise Montbéliarde cows because of their excellent hardiness and adaptability to local environmental conditions compared to the Holstein breeds 17.
Semen quality assessment revealed that spermatozoa viability and motility were higher in Holstein breeds than in Montbéliarde. Rodríguez-Martínez 18 has reported that measured spermatozoa motility in bulls is significantly correlated to fertility even for post-thawed semen.
A higher proportion of spermatozoa with the abnormal head was observed in the black and white Holstein breed, while the percentage of abnormal spermatozoa with tail defects was higher in the Montbéliarde breed. These results clearly illustrate the terrible quality of the selected semen and/or the poor handling and storage of commercial frozen semen, which dramatically reduced the chance of success of artificial insemination programs in Algeria. Hallap, Jaakma 19 reported a high percentage of spermatozoa with standard head and tail morphology in Estonian Holstein bulls. In general, scrotal circumference, as the most accessible measure of a bull’s ability to produce adequate spermatozoa, correlates positively with testicular volume and semen quality 20 and negatively with the occurrence of spermatozoa defects 21.
It is known that morphologically abnormal spermatozoa can diminish fertilization rates and embryonic development 22. The maximum acceptable value for spermatozoa abnormalities percentage ranges between 25% and 30% 3. In general, bull semen is classified as satisfactory if it contains at least 70% morphologically normal spermatozoa, with less than 20% of spermatozoa with an abnormal head 11. Unfortunately, the results indicated that more than two folds significantly exceed these levels for the three tested breeds.
Morphologically abnormal spermatozoa resulting from an abortive apoptotic mechanism or genetic origin are usually characterized by highly damaged DNA 23. Most abnormalities of the spermatozoa head are closely associated with reduced fertility since the spermatozoa head comprises the genetic material and key effectors of fertilization 11. Similar observations have been made by Johnson 24 and Ostermeier, Sargeant 25 regarding abnormal condensation of chromatin and abnormal nuclear shape from a part and bulls’ fertility from another part. Thundathil, Palasz 26 have demonstrated that spermatozoa with abnormal heads reduce fertilization and embryonic development, consequently leading to cleavage failure. Spermatozoa with abnormal midpiece or tail are either non-motile or have abnormal motility; usually, aberrations of these parts occur as spermatogenesis defects and affect spermatozoa motility 11.
Besides, the process of freezing and thawing might induce irreversible damages to spermatozoa membranes, resulting in either the occurrence of spermatozoa abnormalities or cell death 18. John Morris, Acton 27 has reported that at rapid cooling rates, the cell damage to spermatozoa is a result of an osmotic imbalance encountered during thawing, rather than intracellular ice formation. In addition, Ghirardosi, Fischman 3 have attributed the high occurrence of abnormal head spermatozoa to the adverse effects of cryopreservation. Furthermore, Bacinoglu, Taş 28 demonstrated that morphological abnormalities present in frozen and thawed semen were significantly lower in high-fertile bulls.
According to our records, this study represents the first analysis of morphological spermatozoa abnormalities in doses of bovine semen promoted for artificial insemination currently marketed in Algeria.
CONCLUSION
The present study evaluated the artificial insemination success of the most common cattle breeds raised in Algeria through four years of field monitoring and assessed the quality of commercialized bull’s semen used in this operation.
Overall, the present study results have demonstrated a high percentage of normal calving in red and white Holstein breeds. However, embryonic mortality and calving with malformation were higher in the Montbéliarde breed. Besides, assessment of semen quality revealed high spermatozoa viability and motility in Holstein breeds compared to Montbéliarde. In addition, the rate of spermatozoa with the abnormal head was higher in the black and white Holstein breed, while the percentage of abnormal spermatozoa with tail defects was higher in the Montbéliarde breed.
In general, it appears that the bad quality of the selected semen and/or the poor handling and storage of frozen semen constitute a determinant factor that hinders the success of artificial insemination in Algeria. Therefore, spermatozoa morphology assessments are highly recommended before processing and freezing and even in post-thawed commercial doses. Further studies regarding the modalities of distribution and processing are also recommended, so that in the future, the use of bull semen with high percentages of spermatozoa abnormalities might be avoided.