Table 1. Descriptive statistics of the soils properties. (N: 43)
RESULTS AND DISCUSSION
Descriptive Statistics
The basic descriptive statistics for different phosphorus fractions shown in Table 2. In Table 2, the majority of the fractions showed typical normal distribution and their skewness and / or kurtosis value ≤ 2 x standard errors. The available P to plant (NaHCO3-Po, NaHCO3-Pi, NaOH-Pi and NaOH-Po) shows high positive skewness. This stimulation indicates that there is an excessive increase in this fraction, especially in some soils, due to the effects of the practices and / or soil formation processes generally done in the soil. This is an expected situation when the size of the study area and the similarities in the soil formation processes are taken into consideration, in particular the similarity of the climate and the mainstream in general.

Table 2. Descriptive statistics in the absence of transformation to phosphorus fractions (N: 43)
Positive skewness data means that there is a tendency to enrich for P fractions in some soils with significantly higher analytical values than the majority of soils. This can show that fertilization P is converted to a high positive fraction. Depleted-P from the primary mineral structure and/or fertilizer-P was likely to accumulate in Ca-P and/or CBD-P depending on the abundance of the Fe/Al oxides or carbonate minerals and governing thermodynamic conditions. This situation is expected when Ca-P compounds are thought to be more stable in alkaline calcareous conditions and have lower Fe solubility 13, 21.
Given low skewness, it may indicate extinction due to conversion or loss of the relevant fraction. Res-P fraction is the low skewness. Much of the organic matter-induced activity has been stripped away at earlier stages (in particular, alkali extraction steps such as NaHCO3 and NaOH). There is still a small fraction of organic matter that is not alkaline hastened but which can be oxidized, a relatively low skewness factor in the data set.
The averages of determined P fractions (Table 2, Fig 1) were: NaHCO3-Pt 24.16 mg kg-1 ; NaHCO3-Pi 20.69 mg kg-1 ; NaHCO3-Po 3.47 mg kg-1 ; NaOH-Pt 77.84 mg kg-1 ; NaOH-Pi 72,02 mg kg-1 ; NaOH-Po 5.82 mg kg-1 ; CBD-P 132.34 mg kg-1 ; Ca-P 597.05 mg kg-1 ; Res-P 259.54 mg kg-1 . Ca-P Fraction, low skewness coefficient 0.98 and kurtosis coefficient 0.60. This means that with continuous fertilization, this fraction generally increases (can be observed from the concentration values) but it may lead to a reduction in the proportion of this fraction in areas where composting is relatively uncommon or underdeveloped.

Fig 1. The averages of phosphorus fractions (N: 43)
Relationships between Phosphorus Fractions and Soil Properties
Some soil Physico-chemical properties, Pearson correlation coefficients of P fractions given in Tables 3 and 4. The positive correlation between available phosphorus fractions of the soils NaHCO3-Pi fraction and OM (r = 0.581**), EC (r = 0.476**), sand (r = 0.329*), NaHCO3-Pt (r = 0.993**), NaOH-Pt (r = 0.358*), NaOH-Pi (r = 0.397*). The fertilization program can explain positive correlation. The decrease in the content of clay increases the amount of available phosphorus, which can be considered to be related to adsorption mechanisms. . Maranguit et al. 14 found High positive correlation was observed between the available P fractions (H2O-Pi, NaHCO3-Pi and Po) and the total organic P amount and carbon content.
NaHCO3-Po was found to be positively correlated with OM (r =0. 590**). Positive correlation indicates that the increase in organic matter in the soil may be the result of increased fertilization of the soil, which is usually related to the presence of perennial plants, especially fruit trees in the field. Actually, Alovisi et al. 2 have shown that inorganic P fertilizers significantly increase moderate and labile P fractions. On the other hand, available phosphorus has reported that the most contribution is from the organic P fractions to the NaHCO3-Po fraction.
NaOH-Pi Fraction positively correlated with OM (r = 0.609**), NaHCO3-Pt (r = 0.361*), NaHCO3-Pi (r = 0.397*), NaOH–Pt (r = 0.968**), CBD-P (r = 0.421*) and Total-P (r = 0.563**). Positive relationship is the function of the adsorption mechanisms, as previously mentioned, with the surface bound to this fraction (usually bound to Fe and Al, OH surfaces) and the decrease in clay quantity. Uygur et al. 22 found significant relationships between Fe and Al and NaOH-Pi that could be extrapolated by CBD. In this respect, surfaces of oxide minerals are an important component in the adsorption of mineral P 8, 23, 25.
NaOH-Po Fraction positively correlated with NaOH-Pt (r = 0.446*). Positive relationship can be explained mainly for different reasons: i) Because NaOH is alkaline, it can extract organic matter in considerable quantities, ii) Fractions of organic matter or soil organic matter, such as humic acid and fulvic acid, are in competition with phosphate ions for the adsorption surfaces of the soils. Yi-Chao et al. 26 showed that NaHCO3 and organic P extractable with extractable inorganic P and NaOH are significantly associated with miner P fertilization.
CBD-P Fraction positively correlated with OM(r = 0.574**), NaOH–Pi (r = 0.421*). Positive relationship can be explained by fertilization practices in general. The more fertilizer applied to any soil, the higher the availability of fractions (CBD-P, Ca-P and Total-P) in the fractions with high availability in the short run (fractions extractable with NaHCO3 and NaOH) and in the long run at low fractions for buffering the high quantity fractions.
Ca-P fraction in soils was correlated positively with OM (r = 0.497**), Lime (r = 0.335*), EC (r = 0.320*) andTotal-P (r = 0.920**). The relationship between Ca-P and the extractable phosphorus fractions OM can be explained by the plant cover-induced fertilization practices, positive correlations with other properties can be considered because of phosphorous fertilization applied in the region. Actually, negative correlations were found between Ca-P fraction and clay properties in this study. It is thought that the soil components may cause clay adsorption and / or precipitation reactions instead of the Ca-P fraction of P added to the soil when the soil components are high. Patiram et al. 17 found that the different forms of P in acidic soils did not change significantly in the fractions of Al-P and Ca-P. Tandon, 20 found Ca-P in the Indian soil represents about 40-50% of total P in calcareous and neutral soils.
Res-P fraction in soils was correlated positively with CEC (r = 0.392*). The relationship with the CEC points to an increase in the ability to retain P in soil formation processes due to high clay minerals. Shukla et al. 19 and Uygur et al. 21 found that the residual fraction in the calcareous soils was in relatively high quantities. 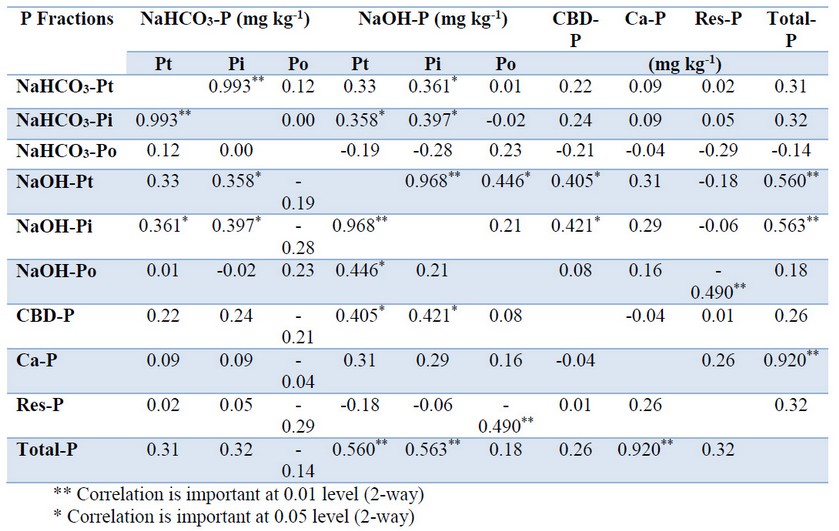