1   Yachay Tech University, School of Biological Sciences and engineering, Hda. San José s/n y Proyecto Yachay, 100119, Urcuquí, Ecuador ; [email protected]
2   Yachay Tech University, School of Biological Sciences and engineering, Hda. San José s/n y Proyecto Yachay, 100119, Urcuquí, Ecuador ; [email protected] https://orcid.org/0000-0002-8767-4280
*  Correspondence: [email protected]; Tel.: +593984444486
Available from: http://dx.doi.org/10.21931/RB/2022.07.01.32
ABSTRACT
Blood transfusion is the most common form of tissue transplant, and correct blood type matching is decisive for the success of this procedure. However, the availability of different blood types depends on each population, leading to a shortage of blood units from uncommon types. Then, it represents a problem for patients who need a blood transfusion because the supply for their blood type is scarce. Fortunately, researchers have been developing different techniques to engineer universal red blood cells (RBC) that could be transplanted to any human being independent of its blood type. This paper details the main features of blood transfusion and red blood cells maintenance and the two more recent procedures used to produce universal RBCs, the Enzymatically Converted Group O (ECO) and the antigen masking methods.
Keywords. Blood, transfusion, red blood cells, antigen, antibody, universal RBC, immunity
INTRODUCTION
One of the current issues in medicine is blood transfusion, it is the most common form of tissue transplant, and blood type matching is the most challenging point to achieve.1 Besides, an incorrect blood transfusion may induce a severe immune response. If the blood given during a transfusion is incompatible, the donor cells are treated as foreign, and the immune system attacks.2 Nowadays, several patients in hospitals are waiting for the availability of blood units. Therefore, it is essential to develop a new generation of blood transfusion systems to overcome the current issues on blood transplants. The most determinant solution is to develop a universal blood type.
Alloimmunity refers to the immune response against non-self-antigens from members of the same species. It represents an obstacle for blood transfusions because different blood types provoke immune responses in the host. Blood transfusions may induce two reactions, immunosuppression and immune activation.3 To overcome this, scientists worldwide are working to develop a universal blood type to overcome the current problems on immunity. Some researchers, as Yueqi Zhao1 et al., have modified the surface of RBCs, covering them with a hydrogel framework to "hide" their antigens and therefore prevent an immune response.
One of the antigens to produce alloimmunity is the Rhesus D factor (RhD), a protein found on the erythrocyte's surface and considered one of the main immunogenic antigens on red blood cells.1 Moreover, the RhD protein is part of the Rh group, the second most important blood group system, after the ABO blood group. Consequently, the variety of blood groups leads to an unequal supply of RBCs units, which becomes worse for those uncommon blood groups as AB-. Since then, an increasing need for the positive-to-negative transition of the RhD antigen has emerged to make blood transfusions more successful.
Blood: Definition and Components
Blood accounts for about 8 to 10% of each person's body mass.4 Throughout its path, it satisfies several functions such as: mainly transporting oxygen and nutrients, it protects the body due to the leukocytes present in it, keeping the body's water and body temperature in balance, and it also collects the residues to then be deleted.4,5 Blood is composed of parts, mostly the liquid part called plasma, approximately 55% of the total blood, and it is much thicker than water and has a yellowish tone. The remaining percentage is 45%, and it is distributed in different blood cells such as red blood cells, which are the most numerous in the blood. RBCs represent approximately 43%, and the other remaining part is white blood cells and platelets by 2%.6,5 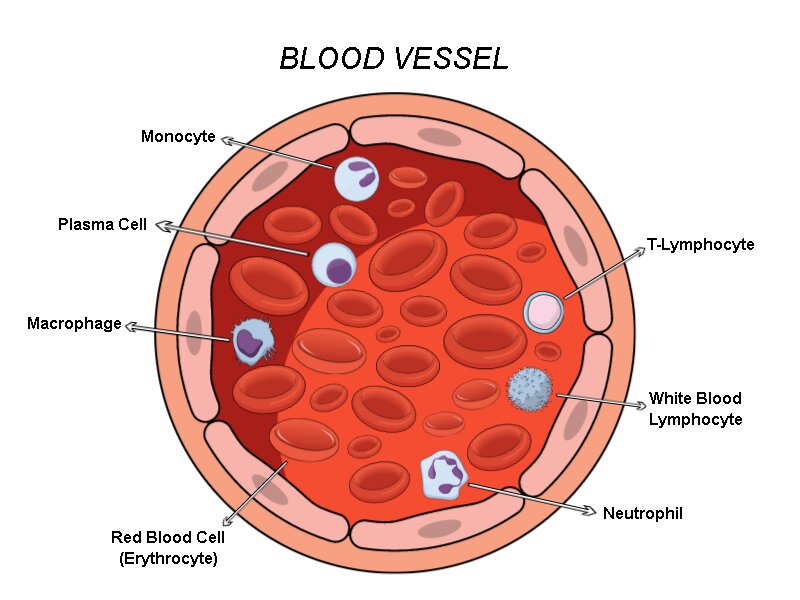 Figure 1. Blood cells composition inside a blood vessel. Inside a blood vessel, there are different types of cells such as the RBCs and immune cells like monocytes, plasma cells, macrophages, neutrophils, white blood lymphocytes, and T-Lymphocytes. In addition to some others, these different types of cells help the circulatory system avoid infections and distribute all the nutrients and molecules the body needs.
Blood Types.
There are four blood types, and they are classified according to the antigens they possess (AB0 system). But in addition to this classification, blood possesses another critical factor for determining its type, the Rh factor. The antigens are present on the surface of the RBCs, and there are two types, A and B.6,4 Moreover, two types of antibodies react with the proteins present on the RBCs, the Anti-A and Anti-B.6 On the other hand, we have the Rh factor, this hereditary protein is also found on the surface of the RBCs,5 and its classification is general; it is positive if it possesses the protein and negative if it does not have. These two types of classifications are the most common in terms of blood types, and those are the ones we will go aboard in this paper
Type A
This group has the presence of antigen A in its red blood cells. Also, the presence of the Anti-B antibody is observed in its plasma (Figure 2), which means that it cannot get the blood of any other blood type.6 Since your blood contains marker A; it will produce B antibodies. If some problem B markers enter your body (these markers are found in the AB or B blood), your immune system will react against them and attack them. This means you can only get transfusions from people who have type A or O blood, not people with type B or AB blood.6
Type B
This blood group has antigen B in its red blood cells, and the presence of the Anti-A antibody is observed in its plasma (Figure 2).7 If your blood contains marker B, it will produce antibodies A. Therefore, as a person with type B blood, you can only receive transfusions from people who have type B or O blood (universal donor), not from people with type A or AB blood, because if another type of marker enters your body, your immune system will attack and there would be problems.7
Type AB
The AB group has the presence of the two antigens in their red blood cells, both A and B, and it has no antibodies in its plasma (Figure 2). This means that it can receive blood from almost all blood types.8 In the case of blood type AB, things are a bit different. If you have both markers A and B on the surface of your red blood cells, your body won't need to fight the presence of either marker. This implies that people with AB blood can receive transfusions from A, B, AB or O blood. However, it also depended on the Rh factor of each one. 7,8
Type O
It is the universal donor, as its blood type is compatible with almost all other types. It is possible because they do not possess any antigens from the AB0 system. However, Anti-A and Anti-B antibodies are observed in their plasma (Figure 2).6,8 However, if you have O-type blood, your red blood cells do not contain A-markers or B-markers, but your body will react by making A and B antibodies when you are given A, B, or AB blood. This means that a person with blood O can only receive transfusions of the same blood type. 8 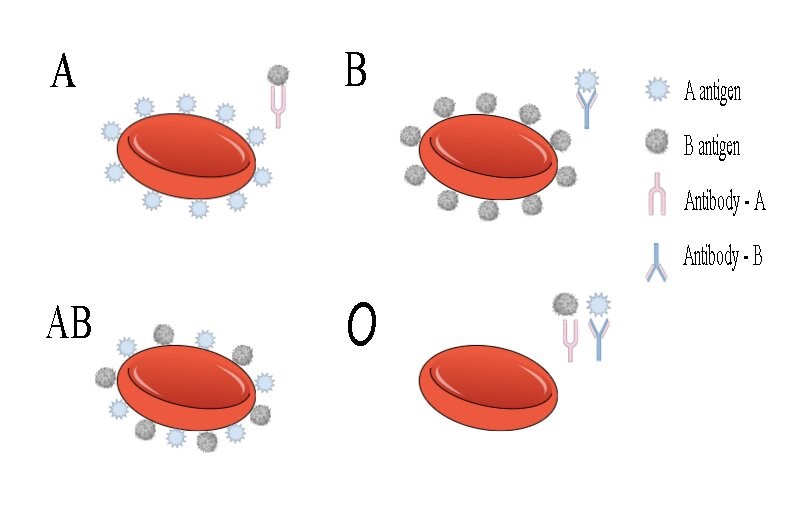 Figure 2. Illustration of the different blood groups of the ABO system. We can see the blood types A, B, AB, and O with their antigens and correspondent antibodies. In the first case, type A has a marker A, and it will produce B antibodies. In the second case, type B has a marker B, it will produce A antibodies- In the third case, type AB has markers A and B, it will not produce antibodies. And the last case, type O has no markers but will produce antigens A and B.
Rh Factor
Type Rh positive
Rhesus factor, commonly known as the RH factor for its acronym, is a protein or antigen inherited from parents and occurs in the red blood cells of certain people. Rh+ are the individuals who present this protein in their erythrocytes. About 85% of people have this protein.4 As shown in Figure 3, the illustration shows that the general population maintains an Rh+; however, a small population maintains an Rh-, so it is important to perform tests for this factor if you plan a pregnancy. 4
Type Rh-negative
The Rh– people do not present the protein in their red blood cells; the figures are very low for this protein. Only about 15% of the world's population possesses this protein (Figure 3).5 However, the lack of this protein is not a disease, and it usually does not affect a person's health.6 RH- is not a disease, but it does affect pregnancy. Pregnancy needs special care if the baby inherits the Rh factor different from that of its mother because it can be inherited from either parent. Rh incompatibility is generated if they are Rh-negative and their baby is Rh-positive, and they need special treatment. 6 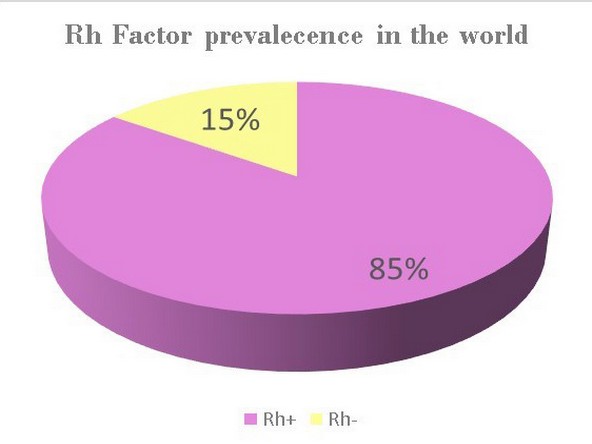 Figure 3. Rh factor, statistics. * Data obtained from OMS.4 and Dean L. 6 In this figure, we see global statistics obtained from several studies about these factors. The illustration shows that Rh+ is the most common factor found in the world population. However, Rh- remains present in a small part of the population, and although it is not a disease, it can generate incompatibility in a pregnancy if the parents have different Rh factors. 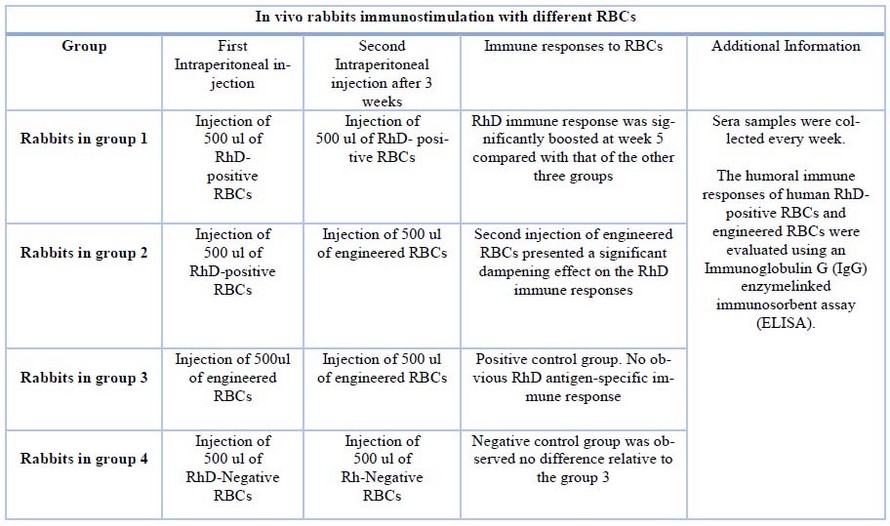