Khin Khin Gyi1, Wint Thuzar Nwe2, Zin Zin Zaw3 and Khin Khin San4
Available from: http://dx.doi.org/10.21931/RB/2020.05.03.6
ABSTRACT
The seasonal abundance and distribution of phytoplankton along the Tanintharyi coastal waters were investigated for 24 months from June 2013 to June 2015. A wide fluctuation in cell abundance 72,450-714,396 cells/l at Kawthaung, 47,416-947,501 cells/l at Myeik, 8,930-28,439 cells/l at Kampani, 8,976-17,888 cells/l at Ye and 5,162-16,986 cells/l at Setse were noted during the study period. Amongst, Kawthaung and Myeik stations had the highest phytoplankton abundance, whereas Ye and Setse stations showed remarkably lower abundance. It was noted that Ye and Setse stations were much influenced by freshwater discharge from the Thanlwin River, which deposited huge tons of sediments. The water clarity was lower at these stations compare with others. Therefore, turbidity may affect the occurrence and species abundance of phytoplankton. A clear seasonal trend was found at all five stations with a sharp increase in the pre-monsoon months and a gradual decrease in the monsoon and post-monsoon periods.
Keywords: phytoplankton, Tanintharyi, water clarity, turbidity,
INTRODUCTION
Seasonal replacements of phytoplankton abundance and composition differ in various environments1. The values change in species composition, and a variety of environmental factors can mediate the dominance of phytoplankton. Also, the possible causes of the seasonal phytoplankton bloom correlated with the seasonal increase of nutrient supply that primarily increased the abundance of phytoplankton.2 Other processes, such as meteorological and hydrological events, may drive non-equilibrium dynamics and enhance species diversity. 3
On the other hand, transient forms are superimposed to the spatial measurement in such a way that the recurrence and concentration of a specific occasion may shift concurring to the neighborhood morphometry, profundity, favoring, or not and species coexistence. Agreeing to asset competition hypothesis, species differing qualities are precisely corresponding to the number of assets that are restricting at a given time, though natural variance or unsettling influence improves the levels of diversity 4,10
Species diversity, composition, distributions, and abundance of phytoplankton are the critical factors in ecology, directly linked with the regulation and functioning of the ecosystems that are used to assess the biological integrity of the water body 5. Because the phytoplankton community composition impacts the functioning of the aquatic ecosystems and the global climate, it is essential to understand what factors govern the phytoplankton community assembly and the dynamics.6 The objective of the study is to obtain a better understanding of the seasonal abundance and distribution of phytoplankton along the Tanintharyi coastline.7
MATERIALS AND METHODS
Sampling site
Phytoplankton samples were collected at the five stations along the Tanintharyi coastline, namely, Kawthaung (Lat. 9º 58. 204ʹ N, Long. 98º 33. 701ʹ E), Myeik (Lat. 12º 26. 186ʹ N, Long. 98º 35. 461ʹ E), Kampani (Lat. 14º 05. 288ʹ N, Long. 98º 04. 143ʹ E), Ye (Lat. 15º 11. 585ʹ N, Long. 97º 47. 518ʹ E) and Setse (Lat. 15º 56. 965ʹ N, Long. 97º 36. 330ʹ E) from June 2013 to June 2015 (Fig.1). 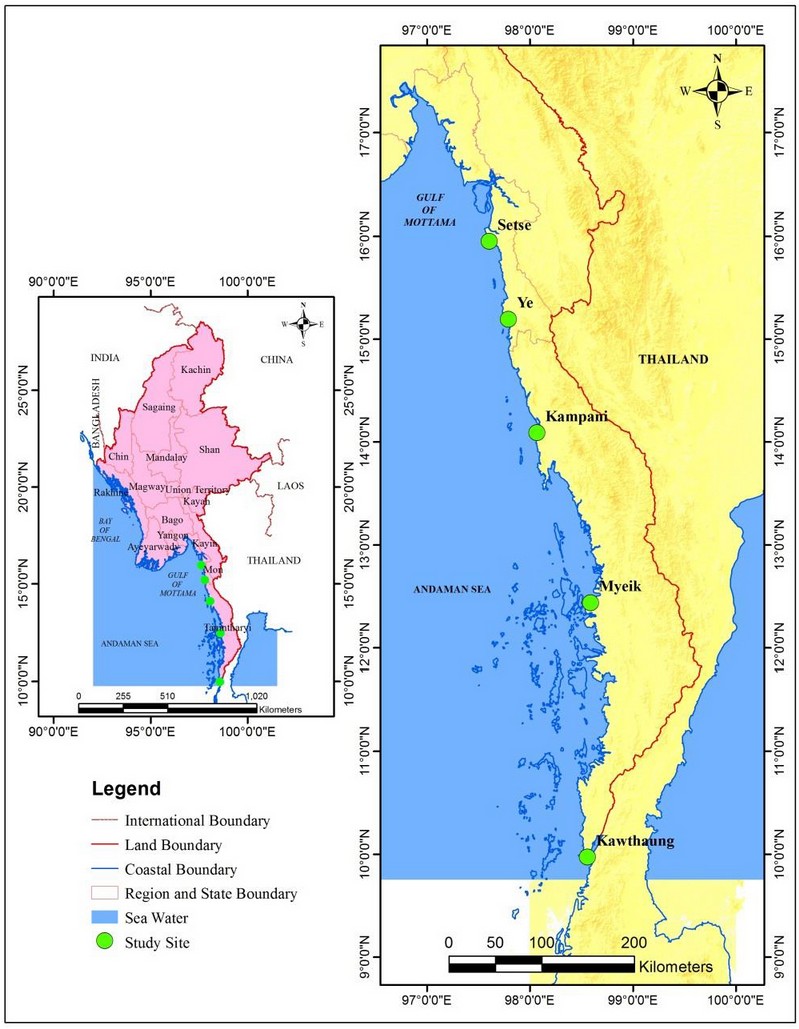 Sample collection
A small-mesh phytoplankton net of 20 μm is used in the sample collection. The phytoplankton samples of the surface water were collected by a plastic bucket of known volume water, 60L. Then, the water passed through the mesh fixed to the bottom of a plastic cylinder. Care was taken to wash all the cells off the sieve. Samples were preserved immediately in a 1% formaldehyde solution for the species identification and counting.
Sample analysis
Sedgwick-Rafter counting chamber was used to count the phytoplankton following the method described by LeGresley and McDermott 20107. Before analysis, the content in the sample bottle was turned gently for making the samples homogeneous. Three replicates of 1mL subsample were taken from a well-mixed sample by using a pi­pette, and the sample aliquot is then dispensed into the counting cell, and then placed under the light microscope at 40x and 10x magnification. The counting unit of all phytoplankton species is expressed in Cells/L.
RESULTS
Kawthaung Station: The abundance of phytoplankton ranged from 72,450-714,396 Cells/L, was observed during the study period from June 2013 to June 2015. The maximum phytoplankton abundance, 714,396 Cells/L was noticed in the pre-monsoon period, especially in April (2015) which was followed by 624,999 Cells/L in April (2014), 493,976 Cells/L in May (2014) and 448,321 Cells/L in May (2015). In contrast, the minimum cell abundance 72,450 Cells/L, 79,000 Cells/L, and 94,862 Cells/L were observed in November (2013), December (2013), and (2014) of the post-monsoon period (Fig. 2).

Ye Station: Phytoplankton abundance ranged between 8,976-17,888 Cells/L. The maximum number 17,888 Cells/L was found in April (2014) followed by 17,439 Cells/L in April (2015) and 16,967 Cells/L in May (2014) whereas the minimum number 8,976 was observed in October 2013, followed by 9,877 Cells/L in October 2014, respectively. A seasonal trend of phytoplankton abundance with decreased values was noted during the monsoon and post-monsoon periods. However, the numbers of phytoplankton were progressively increased and stretched to maximum abundance in April of the pre-monsoon period (Fig. 5).

DISCUSSION
The present study was mainly emphasized on the seasonal variations of phytoplankton abundance at the five stations of Tanintharyi coastal waters, namely, Kawthaung, Myeik, Kampani, Ye and Setse. A wide fluctuation in cell abundance was noted at all stations such as 72,450-714,396 Cells/L at Kawthaung, 47,416-947,501 Cells/L at Myeik, 8,930-28,439 Cells/L at Kampani, 8,976-17,888 Cells/L at Ye and 5,162-16,986 Cells/L at Setse, respectively. The highest cell abundance was observed at Kawthaung and Myeik whereas the least abundance was detected in Ye and Setse stations. It was noted that a clear seasonal trend in phytoplankton abundance was seen at all five stations with a sharp peak in the pre-monsoon period, especially in April, after that a gradual decrease in monsoon and post-monsoon periods.
The 42 common phytoplankton species observed at Tanintharyi coastal waters were Melosira nummuloides, M. borreri, Thalassiosira subtilis, T. rotula, Skeletonema costatum, Paralia sulcata, Cyclotella striata, Lauderia annulata, Coscinodiscus lineatus, C. radiatus, Odontella sinensis, O. mobiliensis, Eucampia cornuta, Hemiaulus sinensis, Bellerochea horologicalis, Ditylum sol, Rhizosolenia imbricata, R.setigera, Proboscia alata, Guinardia striata, G. flaccida, Bacteriastrum delicatulum, B. hyalinum, Chaetoceros curvisetus, C. diversus, C. densus, C. lorenzianus, C. subtilis, Asterionellopsis glacialis, Fragilaria crotonensis, F. capucina, Tabellaria fenestrata, Climacosphenia moniligera, Thalassionema nitzschioides, T. frauenfeldii, Nitzschia sigma, N. longissimia, N. seriata, Cylindrotheca closterium, Prorocentrum micans, Dinophysis caudata, and Ceratium furca. Taylor 19758 reported Guinardia flaccida was noted as the predominant diatom species in Thailand which was in agreement with the present result found at Kawthaung station. Thalassionema nitzschioides and T. frauenfeldii were abundantly seen at Tanintharyi waters throughout the present study period agrees well with the finding of Kamba and Yuki 19805. Aquino et al. 20151 reported Odontella mobiliensis, Chaetoceros subtilis, Thalassionema nitzschioides, Gyrosigma balticum, Bacillaria paxillifera, Cylindrotheca closterium, and Nitzschia lorenziana were the widespread species in the Passos River estuary, Brazil. That result coincided with the present investigation. Moreover, our findings of dominant phytoplankton species in Tanintharyi coastal waters were similar to the results reported by Khin Yu Nwe 20116, Yin Yin Htay 201411, and 201912. Zar Ni Ko Ko 201413 reported Coscinodiscus, Hemidiscus, Rhizosolenia, Proboscia, Guinardia, Eucampia, Ditylum, Odontella, Thalassionema, Nitzschia, Dinophysis, and Protoperidinium were abundantly found in Elphinstone Island waters, Myeik Archipelago. His finding was in agreement with the present study. In his study, phytoplankton abundance was high in November and low in August. However, in the present study, the seasonal trend indicated the highest abundance in April and the lowest in December at Myeik area.
Zaw Moe Aung 201114 described Coscinodiscus, Odontella, Ditylum, Nitzschia, and Ceratium species were very common in Setse waters. Moreover, Aung Myo Hsan 20132 reported Coscinodiscus marginatus, C. radiatus, Minidiscus trioculatus, Cyclotella striata, Skeletonema costatum, Leptocylindrus danicus, Syringidium americanum, Thalassionema nitzschioides, and T. frauenfeldii were frequently observed in Thanlwin River mouth to Setse at Mon coastal waters and high phytoplankton abundance was recorded in the pre-monsoon months. The present result agrees well with their statements. Besides, Thida Nyunt 20139 reported phytoplankton abundance was high from November to May (post-monsoon to pre-monsoon) in Mon coastal waters. Her observation was much similar to the present study.
Phytoplankton communities at the five stations along Tanintharyi coastline, viz., Kawthaung, Myeik, Kampani, Ye, and Setse showed noticeable variations in cell abundance. The maximum cell abundance of phytoplankton was found in pre-monsoon months at all stations which were noted that a mesotrophic environment favor species richness and density.
CONCLUSIONS
Phytoplankton community in Tanintharyi coastal waters showed noticeable variations in species occurrence and abundance, space, and time. The present study observed the highest phytoplankton abundance in the pre-monsoon season at all five stations. An extensive variation in phytoplankton abundance was detected in the monsoon through earlier months of post-monsoon periods due to significant variations in environmental parameters that were strongly affected by monsoon season in the Indian Ocean. Phytoplankton abundance at Kawthaung and Myeik recorded as maximum among five stations because of more diverse kinds and frequently occurring phytoplankton species at these water columns. The existence of mangrove forests and the creation of tide shelter by a chain of numerous islands also support high species diversity of phytoplankton at Kawthaung, Myeik, and Kampani stations compare with Ye and Setse stations where less diverse phytoplankton species were found.