Graciela M. Salum1, Paola P. Echeverría Ortíz1, Jackeline P. Pereira Carillo1, Gandhi F. Villalba Meneses1 and Rubén D. Piacentini2,3
Available from: http://dx.doi.org/10.21931/RB/2020.05.03.9
ABSTRACT.
In the present work, we determined the necessary time to unchain the synthesis of vitamin D for a phototype II skin in Ibarra, Ecuador. In a specific sky situation, the range of exposure time at Sun radiation is 4 to 6 minutes depending on the month of the year, but with clouds, it is needed about 70% more exposure time. This time range is easily reached in normal conditions, but during a lockdown period, as in pandemic situations like the  COVID 19 one or for people that need to live,  work or study inside, if they are exposed to the direct Sun for the minutes indicated above, they will have a natural vitamin D  supplement that will improve its health.
Keywords: solar UV radiation, vitamin D, Ibarra, Ecuador
INTRODUCTION
The solar resource in Ecuador has some particularities since this country is in the central line and is crossed by the high altitude Andes mountains. But this amount of Sun may not be sufficient if the population does not spend enough time outdoors. One of the implications of this fact is that the exposure might not be enough to synthesize vitamin D. In the present work, we analyzed if the solar radiation in the UVB 280-315 nm range is sufficient for synthesizing vitamin D in Ibarra, Ecuador, a high altitude near the equatorial site.
Before the solar irradiance (power per square meter) reaches the terrestrial surface, each range of radiation (ultraviolet UV, visible Vis, and infrared I.R.) suffers an attenuation, due to the different constituents of the atmosphere. Ibarra is an Ecuadorian city at about 2384 meters above sea level. According to D’Orazioet al.1, the UV solar radiation (100-400 nm) can be divided into three ranges: UV-A 400 to 315 nm, UV-B 315 to 280 nm, and UV-C 280 to 100 nm. These ranges are defined mainly following the biological effects that are analyzed. The highest attenuation of solar radiation by the atmosphere occurs in the higher frequency range: the UV-C range, blocking practically all this radiation. At the UV-B range, the attenuation is higher than at the UV-A range, both ranges reaching the terrestrial surface.
Although ultraviolet radiation has several deleterious effects on human health1,2,3,4,5,6, UV radiation remains beneficial as it triggers the synthesis of vitamin D at the skin7,8,9. There are two forms of vitamin D: D2 vitamin and D3 vitamin. Plants and fungus synthesize the former, and the second one results from the solar radiation incidence on the human skin. The UV-B radiation penetrates the skin, where it is absorbed by the 7-dehidrocholesterol molecule yielding the formation of vitamin D34.
The minimum erythemal dose (MED) is the necessary dose to produce the solar reddening of the skin, called erythema. According to the NRPB report10, the lowest appropriate level of vitamin D (D2 plus D3) is 10 mg/L. Holick’s rule establishes that a dose of a quarter of MED is enough to produce sufficient vitamin D on the skin7,11,12. Consequently, we used this Holick’s rule for the definition of the Vitamin D synthesis dose, and then we related it to the erythemal irradiance, to determine the minimum time exposure.
MATERIALS AND METHODS
Considering that

(2).
To determine the necessary time to produce the synthesis of vitamin D, it is necessary to know the energy that produces the erythemal effect (or MED), and the solar power that reaches the terrestrial surface that produces the skin redness (or erythemal solar irradiance).
MED data for a phototype II was obtained from the Fitzpatrick scale of the MED in the function of phototype7,11,12, and then this value was divided by 4, according to Holick’s law1.
The erythemal solar irradiance was calculated with the Tropospheric Ultraviolet and Visible (TUV) radiation model13 for each month to know about its annual evolution in Ibarra at a clear sky situation. Then, we found the months with maximum and minimum values of solar radiation.
The last consideration made was the cloud cover that is very frequent in Ibarra city. This situation was re-analyzed the necessary exposure time to reach the dose to produce the synthesis of vitamin D with the cloudy sky situation.

RESULTS AND DISCUSSION
Figure 1 shows the annual evolution of monthly mean solar erythemal ultraviolet irradiance (an indication of the solar exposure risk) at a clear sky and solar noon in Ibarra, Ecuador. Also, this figure shows the interpolation to derive daily values. It can be seen that the highest irradiance occurs in February to April and again (due to the intertropical geographical position) from September to November. The lowest irradiance occurs in June-July. To highlight the importance of this irradiance, we modeled with the TUV algorithm13 for the 15th day of each month, at solar noon considering clear sky days (cloudiness less than 25%). The annual average value is 339.2±22.1 mW/m2. These irradiances represent a U.V. index value (obtained by the multiplication of the irradiance by the factor 40 m2/W) in the range of 13.6±0.9. We can see that the monthly mean UV index has valued all year round larger than 11, the lowest limit for qualifying it as “Extreme” (see the World Health Organization INTERSUN program at https://www.who.int/uv/intersunprogramme/activities/uv_index/en/). However, and mainly for countries in the intertropical region, Zaratti et al. proposed to modify the relation between the numerical values and the corresponding qualifications, extending to upper values the lower limits14. 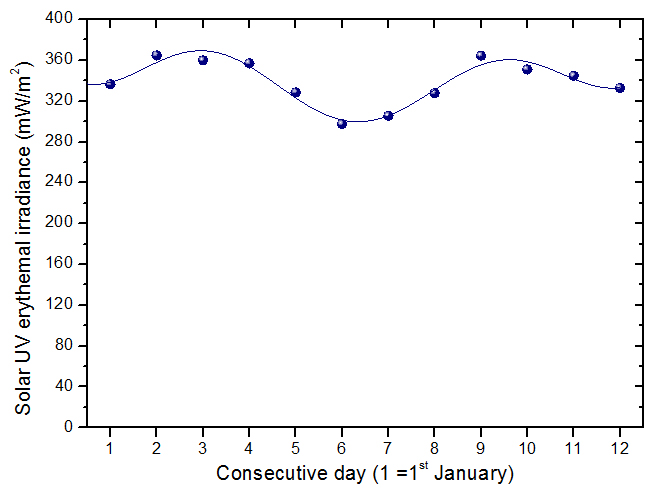 Figure 1. Annual evolution of monthly mean solar erythemal ultraviolet irradiance at solar noon, in Ibarra, Ecuador, modeled for 15th of each month.
Figure 2 shows spectral solar irradiance as a function of the wavelength, calculated with the same algorithm for Ibarra, Ecuador, in bright sky days, at solar noon, for February 15th, 2019, and June 15th 2019. This figure shows the difference between both days that is a consequence of the changes in ozone and aerosols contents in the atmosphere and the change of zenith angle (angle between solar rays incidence and the vertical line in the place) with the date15. 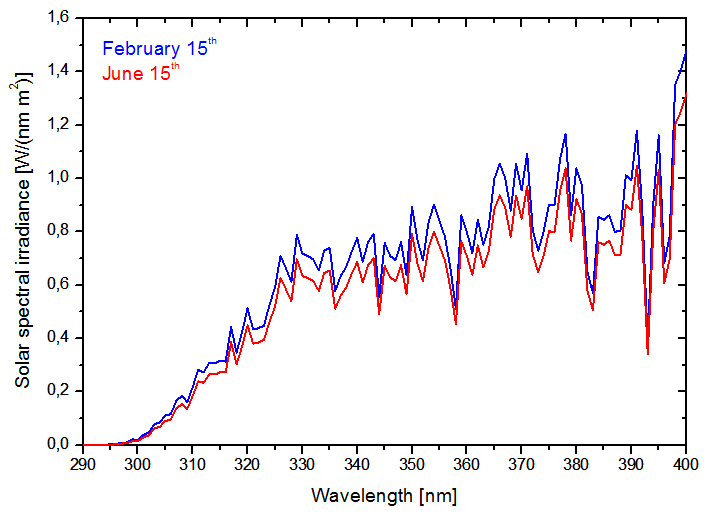 Figure 2. Spectral solar irradiance modeled with the TUV algorithm, at Ibarra, Ecuador, for February 15th 2019 (in blue line) and for June 15th 2019 (in red line), around noon in dates near the maximum and minimum solar erythemal irradiance (or U.V. index), in a typical year.

A previous work16 presented the calculation of exposure time a person with a phototype III must spend under sun irradiance to reach the minimum Vitamin D dose. The calculated range of daily Sun exposure time varies between 3 and 5 minutes for bright sky days at solar noon in Urcuquí, Ecuador, located at 20.2 km from Ibarra. The phototype depends on the Fitzpatrick scale that classifies the skins in six types (from I to VI) according to its photo-response to the ultraviolet exposure1.
In the present work, we determined the necessary time to unchain the synthesis of vitamin D through the skin for persons with a phototype II in Ibarra. For this purpose, we considered a MED of 300 J/m2, and then the dose for vitamin D synthesis, applying the Holick’s rule, is 75 J/m2. In the case of February 15th, the minimum exposure time is 4 minutes around the solar noon at 12:12 local time (= UT - 5 hours). This exposure time is shorter than the necessary exposure time on June 15th; that is 6 minutes (see Table 1). However, it is essential to consider that these times are calculated in the case of a clear sky situation.

Table 1. Vitamin D synthesis in the skin of a person of phototype II, exposed at Ibarra, Ecuador. Dose and minimum exposure time for bright sky days.
Huaca et al. .17 presented an analysis of actual values of erythemal UV radiation in Ibarra city where the radiation suffers a reduction due to the presence of clouds, having an average of cloudiness of 78.5% in this city. In this climatological situation, the radiation is sharply reduced by clouds; for example, erythemal solar radiation for the day, September 3rd 2017, from 9 am to 3 pm was reduced to 72.5%. Therefore, it is necessary to extend the exposure time in normal conditions. 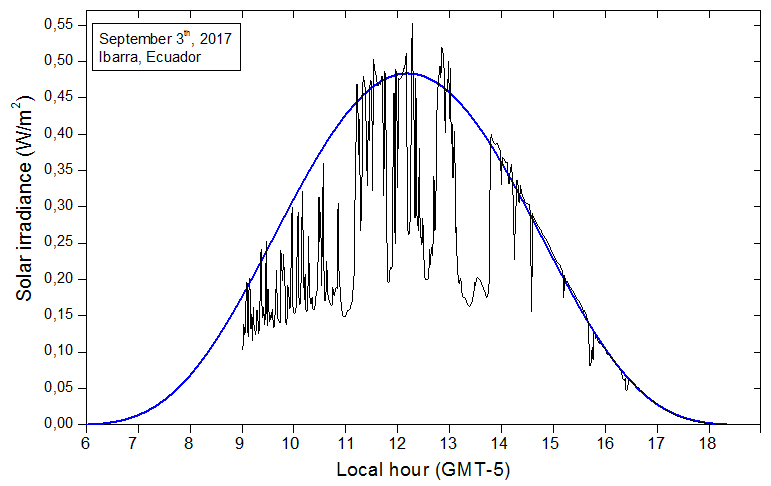 Figure 3. The daily evolution of erythemal irradiance modeled (blue line) and measured (black line) with a biometer Kipp&Zonnen of the Universidad Técnica del Norte in Ibarra the day September 3rd 2017 (adapted from Huaca et al. .17).
It must be pointed out that the time integral of the erythemal UV irradiance in the whole day (called erythemal UV irradiation), for a typical cloudy day, is 33.6% lower than a day without clouds. So, it was determined that to reach the dose for vitamin D synthesis at solar noon, we need 5 minutes of exposure (see the black line in Figure 3). If the day is clear sky, the time needed would be 3 min (see blue line in the same figure).
The time range from 3 to 5 min for vitamin D synthesis at Ibarra, Ecuador, is easily reached in normal conditions. However, the COVID-19 pandemic makes the people stay at home and do not frequently go out, reducing, consequently, their solar time exposure. Therefore, the required sun exposure usually is not achieved, and special care must be paid to the exposure of persons to solar radiation, at least several mins around noon.

CONCLUSIONS
In conclusion, we would like to point out that in Ibarra (and adjacent regions), for the synthesis of vitamin D at the skin of a person with phototype II:
In clear sky days around noon, it is needed to be exposed to solar UV radiation between 4 minutes (around the maximum, see Figure 1) and 6 min (around the minimum, see the same Figure 1), all year round.
In typical cloudy days, this time needs to be increased significantly, but always in the range of some minutes. For example, for the cloudy day of September 3rd, 2017, the time exposure increases from 3 mins (if the day would be of clear sky) to 5 min.
These results show that, with a minimum time exposure of several minutes around noon and during all the year (due to the very small monthly variation of the solar radiation in Ibarra, Ecuador, an almost equatorial site), vitamin D can be synthesized to produce a reasonable quantity of this vitamin in the skin of a person with phototype II, if it is exposed about 6 minutes, the most significant value determined in the present work, for the worst condition of a cloudy sky.
We also like to point out that a very recent publication18 presented results obtained in Europe that establish a direct connection between the deficiency in Vitamin D (that reduces the ability of the human immune system to react, as shown by Baeke et al. .19) and the COVID-19 disease
REFERENCES