,*
1   Technical University of Manabí, Faculty of Agronomic Engineering, Experimental Campus La Teodomira, Km 13,5, Santa Ana, Manabí, Ecuador, Postal code: EC130105; [email protected], [email protected],
2   Federal University of Santa Maria, Department of Physics, Climate Research Group, Av. Roraima, 1000, Santa Maria (RS), Brazil; [email protected] ORCID:
*  Correspondence: [email protected]; Tel.: +593 939929958. Portoviejo, Manabí, Ecuador
Available from: http://dx.doi.org/10.21931/RB/2022.07.01.35
ABSTRACT
Web blight caused by Rhizoctonia solani Kuhn is one of the main common beans (Phaseolus vulgaris L.) diseases of the Ecuadorian central coast. Thus, the present study aimed to evaluate the progress of web blight incidence using nonlinear models in promising genotypes SER 03 and SER 08, using the commercial cultivar INIAP 473 as a control. This study was carried out between the 2010 and 2012 seasons in Quevedo, Ecuador. Epidemiological parameters such as initial disease (y0), disease progress rate (r), final incidence and the area under the disease progress curve were estimated using the Exponential, Logistic, and Gompertz models. In general, progress curves, epidemiological parameters and other evaluated plant health variables were lower in the INIAP 473 cultivar than the other genotypes in 2011 and 2012, especially in the last season when higher y0 and r were observed in the commercial cultivar. It seems that soil and seeds inoculum and temperature play an important role in standard bean crop disease progress. While the response of genotypes and each location conditions influenced the epidemic modeling, the Logistic model better described the web blight progress under these conditions.
Keywords. Phaseolus vulgaris L.; Rhizoctonia solani Kuhn; initial disease; disease progression rate; final incidence
INTRODUCTION
Common bean (Phaseolus vulgaris L.) is a socially important crop in Ecuador and an important legume in the Ecuadorian diet. Currently, the bean area is estimated at 25253 ha with a mean yield1 of 0.61 t ha-1, highlighting the provinces of Los Rios, Imbabura, and Azuay, which have the largest planted area for this crop2. On the central Ecuadorian coast, farmers use native and introduced cultivars3, which are generally susceptible to different biotic-based diseases.
Several diseases affect bean crops on the central Ecuadorian coast, i.e., rust (Uromyces appendiculatus Pers.: Pers.), web blight (Rhizoctonia solani Kuhn), virus infections, and root rot (Fusarium spp., R. solani and Macrophomina phaseolina Tassi)4. Among these diseases, the one that most predominates over the rest is the web blight, both in monoculture and association systems5,6. In general, the disease may be observed affecting bean crops established each year in the north of Los Ríos province, reaching a severity of 88% in susceptible genotypes7. Web blight considerably reduces the number of nodes, pods, and grains per plant and the grain yield4,7. Another predominant factor is the association between web blight and root rot, caused by R. solani3. Diseases management in commercial cultivars and landrace bean genotypes established in this part of Ecuador is usually through fungicides3.
Although there is currently valuable information about the web blight intensity in promising bean genotypes, obtained from different experiments established on the central Ecuadorian coast during some years, no epidemiological studies have been carried out in this pathosystem. From an epidemiological point of view, an epidemic may or may not generate sufficient levels of damage to cause economic loss in an agro-productive system8. Different linear and nonlinear mathematical models can be used to describe the development of epidemics, i.e., Exponential, Monomolecular, and Logistic, with polycyclic diseases being able to be described using the Logistic model and monocyclic diseases using the Monomolecular model9.
The parameters used are the initial disease, the apparent disease increase rate, and the maximum disease level10. In any case, not all disease progress curves are well or quickly described using a growth curve model, and alternative methods such as the Area Under the Disease Progress Curve (AUDPC) can also be used, which allow quantitative resistance to disease assessment11. Mathematical growth models can summarize, in the form of relatively simple mathematical expressions, the relationship between disease and time, having practical importance, or simply contributing to a better understanding of the disease’s infectious progression12.
A web blight epidemiological study under natural conditions in different bean genotypes and seasons in a row can expose valuable information that will help select efficient disease management strategies for this legume. Therefore, in the present work, epidemiological parameters of web blight such as the quantity of initial inoculum and the progress rate were compared, using the Exponential, Logistic and Gompertz models, in the promising genotypes SER 03 and SER 08, using the commercial cultivar INIAP 473 as a control between 2010 and 2012, in Quevedo, Los Ríos province, Ecuador.
MATERIALS AND METHODS
Study Area
Field experiment was carried out at La María Experimental Farm (79° 30' 08'' W and 0° 00' 35'' S) between 2010 and 2011 (Experiments 1 and 2), and at Hacienda Florencia (79° 50' 86” W and 01° 06' 84” S) in 2012 (Experiment 3). Both locations are in Quevedo, Los Ríos province, Ecuador, characterized by having conditions of humid tropical forest (bh-T), with uniform topography, clay loam type Inceptisol soil, and pH 5.7. The mean air temperature and rain precipitation of these experiments are shown in Figure 1. Meteorological data from Client for ‘NASA' ‘POWER’ global meteorology, surface solar energy and climatology data’ API’. ‘POWER’ (Prediction Of Worldwide Energy Resource) freely available for download with a spatial resolution of 0.5 x 0.625 degree latitude and longitude for meteorology were used as observed data. 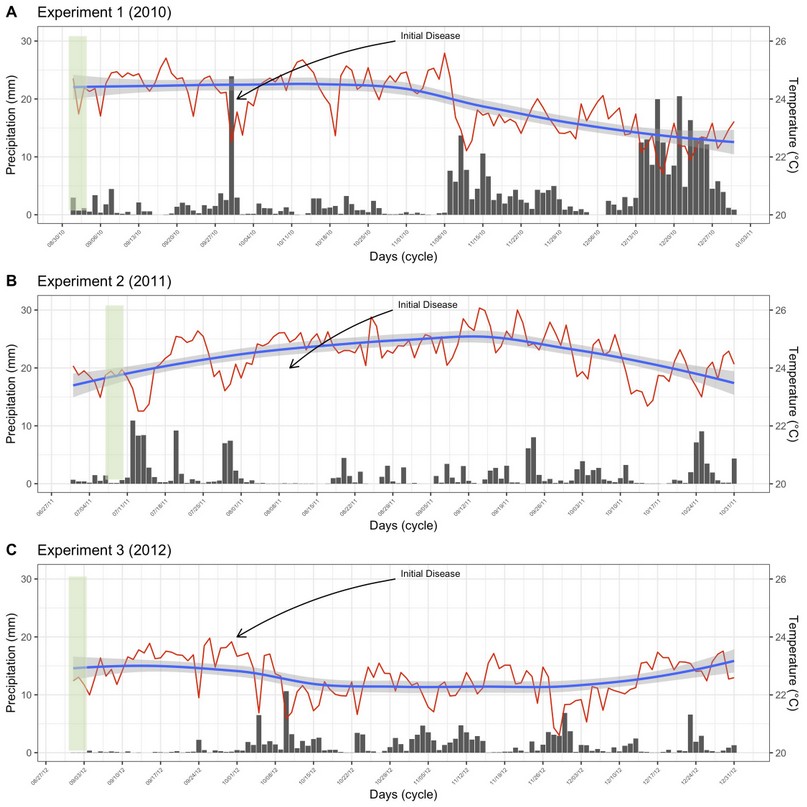 Table 1. Genotype, growth type, and origin of the common bean genotypes used in the research. Quevedo, Los Ríos, Ecuador
Field experiments
For 2010-2011 the experiment was established in a successive bean crop season area. The soil was mechanically prepared three days before sowing. The seeds were treated before being sown with carbendazim fungicide (200 mL per 100 kg seeds-1). Using a conventional sowing system, two seeds per site were sown, spaced 0.20 m between plants and 0.50 m between rows, resulting in an approximate density of 100000 plants ha-1. Each plot was comprised of four 7.5 m2 plant rows totaling 65 m2. Fertilization consisted of applications of N, P, K in 100 kg ha-1 doses, at 13 and 27 days after sowing (DAS). A foliar biostimulant (containing macro and microelements, phytohormones, humic acids, and vitamins) was also applied at 68 DAS (1.5 L ha-1). The weeds were controlled with glyphosate and pendimethalin with 2 L ha-1 doses each and manual weeding during crop establishment. For insect pests, lambda-cyhalothrin (0.2 L ha-1), methomyl (0.5 kg ha-1), and pyrochlore (0.5 L ha-1) were applied on three occasions. To compensate for crop water needs, several sprinkler irrigations were carried out. No fungicides were used.
In the 2012 season, the experiment was established in a previous banana crop field. All experiments were the same as the 2010-2011 experimental management, except for plant density. Two seeds per hole were sown in a 0.20 m between plants x 0.60 m between rows scheme, resulting in a planting density of approximately 90000 plants ha-1. Each plot was composed of four rows of plants and 9 m2, totaling 96 m2. All cultural management according to the previous seasons was developed.
Disease assessment
Web blight incidence (%) was measured during five (2011 and 2012) and six (2010) consecutive weeks, from the phenological stage R6 (full flowering). Central leaflets were taken from the lower, middle, and upper canopy strata from four plants located in the two rows outside the proper plot (two central rows) in each treatment (genotype), totaling 12 leaflets. Leaflets with lesions larger than 2 mm were classified as diseased. The plant material was analyzed in a stereomicroscope with a 2X optical magnification binocular lens during the first two weeks. The diseased leaflets percentage defined this variable.
To verify the presence of the causal agent, some infected leaflets were placed for a few days in a humid chamber with a photoperiod of 12 h at room temperature. Subsequently, different samples were prepared to observe morphological characteristics (mycelium) of the microorganism associated with web blight symptoms.
Experimental design and statistical analysis
A randomized complete block design (RCBD) was used in each experiment, with four blocks for each treatment (genotypes). All the values obtained in the experiments were integrated as the area under the disease progress curve (AUDPC).
For the analysis of disease progress, the disease progress rate (r) was calculated using the Logistic model equation10 (Eq. 1); y=1(1+exp (-a+rt)) (1), where y = disease proportion (0 < y <1), a = logit (y0), r = rate, and t = time; the Gompertz model equation10 (Eq. 2): y=exp (-B*exp (-kt)) (2), where B is a position parameter, k = rate, and t = time, and the exponential model equation (Eq. 3); y= y0exprt (3) where y0 is the initial value, r is the rate and t the time.
AUDPC, model curve calculation, and residuals were estimated using the epifitter package13 for Rstudio14. All figures were plotted using GGPLOT15.
After verifying the homogeneity of the variance of the data sets, the data were subjected to analysis of variance. Tukey (P ≤ 0.05) test was used to make the comparisons. Pearson correlation between mean meteorological variables and disease progression was performed (P ≤ 0.05).
RESULTS
The average temperature was 24.2, 25.1, and 23.3 ºC, and growing season precipitation was 390, 179, and 149 mm, respectively, in 2010, 2011, and 2012. The relationship between mean meteorological variables used in this study and disease progression was not found (data not shown).
Hyphal branching varied from 45 to 90° (spores were not found) was observed (Figure 2A) when mounting specimens in the microscope from samples in symptomatic leaf tissue previously placed in a humid chamber. Regarding symptoms, the lesions began as necrotic spots with a yellowish halo (Figure 2B) that increased over with time until they became brown and dark-bordered, covering the leaflet area forming a cobweb (Figure 2C).

Figure 2. Rhizoctonia solani mycelium (A) and web blight symptoms (B and C) observed on common bean leaflets. The arrows indicate the angle of 45 and 90 º of the mycelium and the disease lesions.
The progress of the web blight varied between genotypes and years (Figure 3). In 2010, disease incidence was practically similar in the three evaluated genotypes (Figure 3A). Although in 2011 (Figure 3B) and 2012 (Figure 3B), the incidence was higher in the commercial INIAP 473 variety, the disease began a little earlier, only in the first year. 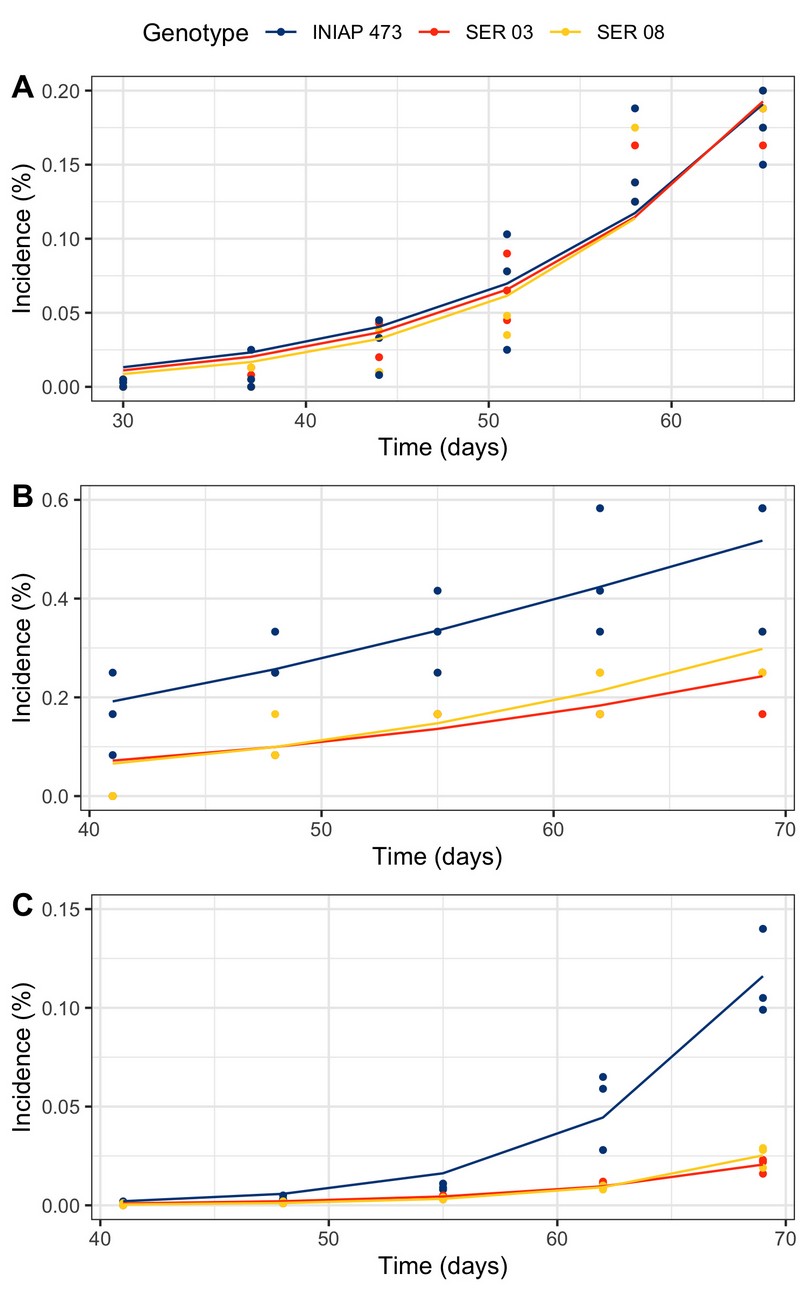 Table 2. Initial disease (y0), and progress rate (r) using Exponential, Gompertz, and Logistic nonlinear models, from web blight incidence in INIAP 473, SER 03, and SER 08 genotypes, established in 2010, 2011, and 2012, Quevedo, Los Ríos, Ecuador. Coefficient of determination (R2), and probability value (P-value) statistical parameters
The lowest mean square of residuals (MSR) was obtained in the INIAP 473 and SER 03 genotypes with the Logistic, Gompertz, and Exponential models in 2010, 2011, and 2012, respectively (Table 3). Although this pattern (models and years) was recurrent in the SER 08, lower MSRs were also observed using the Gompertz and Exponential models in 2011 and 2012, respectively.
The residuals of the progress curves (Figure 4) varied considerably between genotypes and epidemiological models only in 2011 and 2012, having a similar pattern between the factors analyzed in 2010. Although in 2011 and 2012 the points were located closer to the central axis, this was more evident in the last year. In fact, in 2012 the residuals were lower in the SER 03 and SER 08 lines using all nonlinear models, compared to the INIAP 473 in the same year, and with the other factors analyzed in 2010 and 2011. 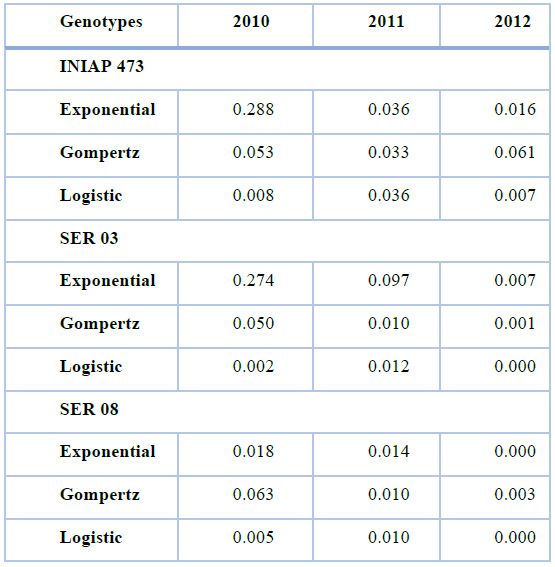 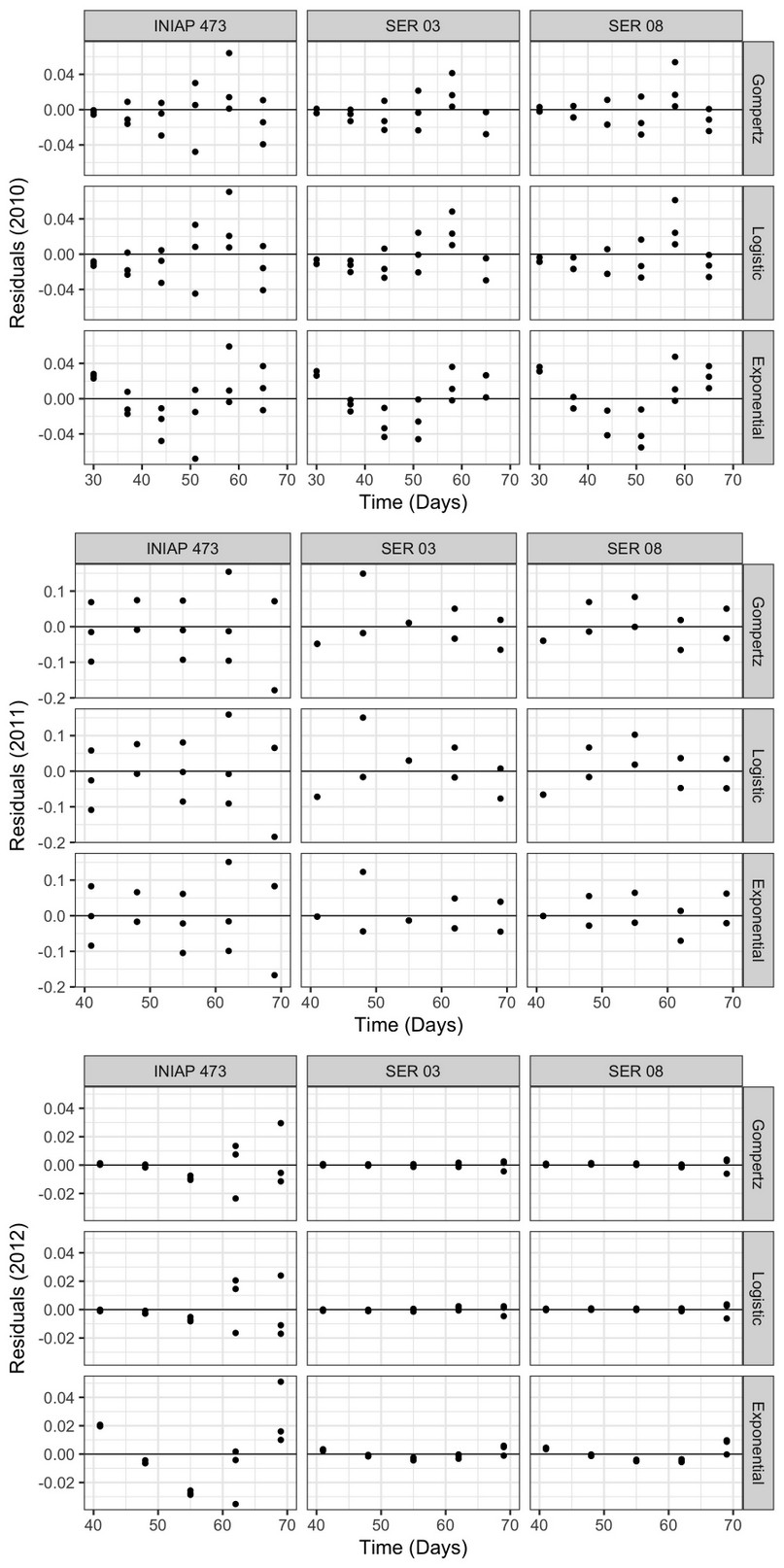