×
Go to content
REVISION/REVIEW
Previos / Index / Next
Hormonal signaling factors produced by brown adipose tissue as regulators of metabolism of carbohydrates and lipids.

Francisco Santacruz-Hidalgo, Eliana Viscarra-Sanchez.
Available from: http://dx.doi.org/10.21931/RB/2019.04.02.11
ABSTRACT
Brown adipose tissue is one of the principal generators of heat in the body; due to the activation of many hormones and receptors, it takes a fundamental role in thermogenesis. However recent studies have proved that this is not its only function. Brown adipose tissue could also act as an endocrine organ, which means that it releases chemical substances to the blood and regulate some activities in the organism. This cell communication process is momentous, since allowing cells to exchange physicochemical information with the environment and other cells in the body could be a relevant field of study in treatments of obesity, diabetes and other diseases related with body weight. This paper offers an overview of different transcriptional factors, endocrine regulation and therapeutic applications of the brown fat tissue, and also the distinctions that it has with white adipose tissue and beige adipose tissue.
Keywords: thermogenesis, brown adipose tissue, endocrine regulation, transcriptional factors.
INTRODUCTION
Brown adipose tissue (BAT) is considered as an endocrine organ because besides it causes oxidation of products to generate heat, it also secretes signaling factors to all the body that activate metabolism of lipids and carbohydrates. This factor is studied to treat diseases like obesity, that according to Centers for Disease Control and Prevention (CDC), it is estimated that in 2015–2016, 93.3 million (39.8 percent) American adults and 13.7 million (18.5 percent) American children and teens are clinically obese 1.
Brown Adipose Tissue (BAT) is made of brown adipocytes and progenitor cells of adipocytes as well. It has a significant number of mitochondria, which give it this brown coloration. It was thought that this tissue is only present in newborns, but it has been proved that is still present in adults as a response of cold, generating thermogenesis and it is activated principally by exercise that helps irisin releasing, which is a hormone that can convert white adipose tissue to brown adipose tissue 2.
One of the principal functions of brown adipose tissue is the activation of thermogenesis through decoupling protein UCP-1 (thermoginin), which is the protein principally involved in generating heat through thermogenesis. For this to happen, norepinephrine must be released first, to obtain the fatty acids from the triglycerides that activate UCP-1, the mitochondria will import the fatty acids that remain and here the thermogenesis will take place with the dissipation of energy as heat 3

What is brown adipose tissue
Informal definitions, the Brown adipose tissue it´s a conformation of adipocytes with rich content of mitochondria, which is inherent to mammals and could represent an evolutionary advantage to survive during the early stages of life, nocturnal and hibernal cold, among others. The development of this tissue probably took place during the early development of mammals, and in contrast to other mammalian organs it could be considered as “new organ”. 4
It also is related to non-shivering thermogenesis and endocrine control of metabolism, that is directly associated to the pathophysiology of distinct fat depots. Unlike white fat, this organ can dissipate significant amounts of chemical energy through uncoupled respiration and heat production 5.

Different types of adipocytes
We can distinguish between 2 significant groups of adipocytes, classified as white, beige and brown.
White adipose tissue (WAT) consist mainly of white adipocytes, which are rounded cells that serve as storage of triglycerides, which are capable of save the excess energy obtained by ingesting food. Also, they function as thermal insulators, protection against mechanical damage and secretion of adipokines. The metabolic functions of WAT are associated with inflammation, insulin resistance and type 2 diabetes 5.
In the other hand brown adipose tissue (BAT) was discovered in hibernating mammals and newborns, where it helps to maintain adequate core temperature. It differs from WAT principally in the number of mitochondria present per cell and a central nucleus (in white adipose tissue the nucleus is located in the periphery). Brown adipocytes can emerge in white adipose depots by the action of prolonged cold exposure, this arising of BAT is called "browning" or "beiging". It's known that the high thermogenic capacity of the tissue contributes to energy expenditure 5. The term beige adipose tissue is used to describe an intermediate state between white adipose tissue and brown adipose tissue.

Figure 1 Representation of the different type of adipocytes 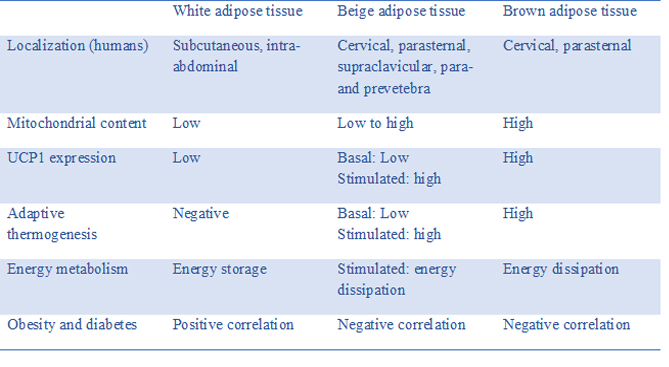 Table 1 Characteristics of white, beige and brown adipose tissue
Development and location of BAT
Expression of a thermogenic program in adipose tissue is orchestrated by a piece of sophisticated transcriptional machinery that involves a plethora of transcription factors, co-activators, and co-repressors 5.
In the following list, we are going to mention some of the transcriptional regulators in the brown/beige adipose tissue function.
PPARγ complex (peroxisome proliferator-activated receptor gamma)
Is one transcriptional regulator of adaptive thermogenesis, it regulates its function by cold exposure, during exercise or fasting periods inducing the activation of PGC1α co-activator or by thyroid hormone receptors. The overexpression of PGC1α promotes the expression of UCP1 and mitochondrial enzymes in the respiratory chain
PRDM16
It is a transcriptional co-regulator. In a study, the overexpression of this molecule in myogenic precursor cells was enough to reprogram these cells to brown adipogenesis. It is related also in the control of muscle generation. The PRDM16 molecule interacts with PPARα/PPARγ and CCAAT/enhancer binding protein, leading to an induction of brown fat genes and the repression of fat white genes. 5
Retinoids
Other transcriptional activators of BAT are the vitamin A metabolites or also called retinoids. This molecule induces the expression of UCP1 in adipocytes through nuclear receptors of retinoic acid and retinoid X receptors; this response it has been identified as an enhancer of the UCP1 promoter. Experiments done with mice suggest that high administration of retinoids reduce the body weight in mice in a high-fat diet5.
BAT in endocrine regulation
BAT is considered an endocrine organ due to substances it secretes, such as hormones and cytokines that coordinate a response in the immune system, also TNF alfa, adiponectin (a hormone involved in lipids and fatty acids metabolism), leptin (a hormone that regulates appetite and thermogenesis). BAT exclusively secretes Batokynes, and some of them are needed to maintain a stable temperature, such as FGF21 (fibroblast growth factor is a protein present in mammals that can pass through the hematoencephalic barrier and act in brain areas). IGF-1 (Insulin like growth factor 1), neuregulin 4, interleukin 6 and others like prostaglandins and adenosine that play an autocrine role, being the white adipose tissue, heart, liver and also brain the target organs for these released factors 2

BAT in metabolism
Brown adipose tissue is also related to lipidic and glucidic metabolism, because it has a high absorbance of glucose in its mitochondria, through GLUT-1 and GLUT-4 transporters. Due to it is involved in the elimination of triglycerides in association with LPL (lipoprotein-lipase), which is a protein that hydrolyzes triglycerides into fatty acids, allowing them to be available for trans-membrane transporters like CD36, that identifies cell surface molecules 3.
Toll-like receptors (TRL), proteins that are part of immune system, are involved in the absorption of fatty acids in the adipose tissue to increase the HDL in co-working with Vascular Endothelial Growth Factor (VEGF), which is another protein that increases the permeability of lipoproteins, increasing the expression of LPL.
Batokynes have also been studied in animals, and it has been identified that they act in the same way as in humans. Because when brown adipose tissue was implanted in lab rats, there was an increase in the consumption of glucose and insulin sensibility, which implies a healthier metabolism. For this reason, in the future, they could be used to create new medicines and drugs against diseases like diabetes and actually, nowadays, scientists are developing cellular models of human brown adipocytes cultures in vitro to be studied and allow the creation of treatments with this molecules to be consumed by people as medicine 6.
Sympathetic neural and gastrointestinal control of BAT
The sympathetic nervous system innervates the BAT, and it controls the activation of the thermogenesis. BAT thermogenesis is triggered by releasing epinephrine, stimulating β3-adrenoreceptors that later in a cascade of events ends with the activation of the UCP1. It has a sensory innervation that functions responding to changes in temperature. SNS also monitor the lipolysis of the tissue 7. Oxidation products as matured hop bitter acids (MHBA) induce the secretion of gastrointestinal hormone cholecystokinin in the digestive tracts, elevating the Calcium ions levels in the enteroendocrine cells and activating the innervation by SNS, increasing the temperature of the BAT in mice 8.

Therapeutic applications of BAT
Activation of brown/beige adipose tissue is a strategy for treatments against obesity and promote metabolic health. There are many methodologies used to carry out this activation, including:

BMP8b and adrenergic-induced remodeling of neurovascular network
Overexpression of bmp8b gene in adipose tissue enhances browning of subcutaneous depots and maximal thermogenic capacity. This experiment carried out in genetically modified mice, demonstrate that the sympathetic innervation in fat has increased. An increase in innervation as we have seen it’s fundamental to trigger the metabolism of fatty acids 9.