Jordy  José  Cevallos-Chávez
Available from: http://dx.doi.org/10.21931/RB/2021.06.02.32
The members of any family are not always living in the same region. Either for work, study or other reasons they are separated by distance. Although they live separately, they are related by blood and still interact with another family member to some extent. This phenomenon not only happens with humans. In the same way, we can see this pattern with any living organism in nature. For instance, we can see individuals of a forest bird species distributed among several separate forest patches, within which more or fewer stable populations are established, but that maintain migratory movements from one patch to another. At present, nature is increasingly fragmenting due to natural causes as well as a human activity. Therefore, since nature is patchy and becoming more so, biologists have become more interested in metapopulations1. Specifically, they have a particular interest in understanding how metapopulations adapt. Adaptation in Metapopulations addresses this topic, providing a varied, profoundly considered discussion of the current condition of the understanding of it. 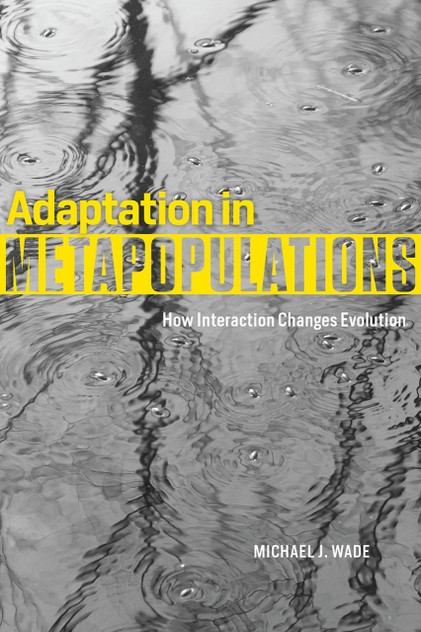 Michael Wade (professor of Biology at Indiana University Bloomington) has synthesized decades of research in the lab and the field in a book both experimentally founded and supported by a solid conceptual framework. In this book, he has approached a diverse array of topics, from types of selection (group, kind, individual, and sexual), genetics (speciation and parent), to host-symbiont coevolution to assess "How is the process of adaptation different if the members of a population live clustered in small groups instead of being homogeneously distributed like grass on a lawn?" Wade presents a series of artificial group selection studies on flour beetles reinforced by natural experiments with willow leaf beetles, as well as additional experiments on the related issue of Wright's shifting balance theory. Adaptation in Metapopulations is a relevant contribution since it explores interaction as a critical factor for understanding this type of evolutionary mechanism.
Wade's work would be controversial if presented in an earlier stage of the understanding of evolution since interactions had primarily been overlooked. In that stage, researchers believed that individuals could be broken up into their parts (genes and environment), and conversely, the sum of them would represent the reality of the whole without considering the interaction between them. Therefore, the leading researchers' approach to comprehend evolution was understanding how adaptation works at the genetic level. If the adaptations were understood at the genetic level, then the higher-level units would be too, since they were merely an aggregate of lower levels. As our understanding of gene interactions improved, it prepared the way for Wade's work, e.g., Lewontin and Matsuo2, and Michod3, which are about interaction at the genetic level.  The way that Wade compares evolution with a poker game to introduce interaction is mesmerizing. In his book, he presented experimental results using artificial metapopulations of flour beetles (genus Tribolium) and moving individuals among clusters to maintain gene flow.
Wade's experiments that imposed group selections generally got strong results with cannibalism, a group interaction that became the noticeable critical trait. Cannibalism in beetle clusters was helpful to understand the metapopulations' differences in growth rate. Some of the results derived from Wade's experimental research even exceeded his expectations. For instance, when he analyzes the size of the between-group variance and the strength of the group response in one of his experiments, he found it was more significant than expected. Wade, in his book, not only presents his findings but also explores possible explanations for them. Furthermore, Adaptation in Metapopulation contains discussions of Wade's results as evidence that strongly support and enforce other related theories such as Wright's shifting balance theory of selection. Based on his experimental work, Wade shows that Wright's theory is solid.
This book could look some dense in the content sense because of the wide theoretical framework. This is a book that offers a structured (chronologically) literature review of evolution. The reader could easily follow the history of the development of theories about the field. Furthermore, the author's attractive way explains some biological phenomena can help to understand the idea faster. Also, the book contains illustrations and clear diagrams to show their results graphically.
Adaptation in Metapopulations is a book that contributes meaningfully to the understanding of evolution due to the broad range of topics that the author addresses.  Furthermore, he provides some explanations of his outlier findings which are insights that are worth considering. This book could be valuable and helpful for beginners to get involved in contemporary evolution theory, offering the reader an extensive background in the field with new approaches. I strongly encourage everyone to read this book to have a rich panorama of evolutionary phenomena. It is worth reading.

Acknowledgments
I thank professor James Collins for his comments and suggestions in developing this work during his Evolutionary Ecology class.
REFERENCES