Doaa Dawood Salman1*, Wasan Qasim Turki2, Saba Riad Khudhaier3, Bahaa Abdullah Laftaah Al-Rubaii4
1University of Fallujah, College of medicine, Anbar, Iraq.
2Department of Medical Laboratory Techniques, Almustafa University College, Baghdad, Iraq.
3Department of Biology, College of Science, Mustansiriyah University, Baghdad, Iraq
4Department of Biology, College of Science, University of Baghdad, Baghdad, Iraq
Corresponding author email is: doaamed@uofallujah.edu.iq; 00964-7905541148
Available from: http://dx.doi.org/10.21931/RB/2022.07.02.41
ABSTRACT
Many nations are seeing an increase in water pollution from dairy and cheese production due to the high organic and fat content in their waste products and the high temperature of their waste products, which elevates the water temperature and causes loss to ecosystem components. Reusing industrial wastewater that has been treated to guarantee no harm has been done to the environment is being hampered by a lack of water. This study compares the presence and absence of mixing in the anaerobic biological treatment of liquid waste for the cheese industry. To decrease heat exchange with the external environment, cube-shaped anaerobic reactors with dimensions of (30 x 30 x 30) cm and thick glass (10 mm) were utilized in this investigation. The temperature of the two reactors was 35°C, with the first reactor containing a mixture and the second reactor containing no mixture. Samples were obtained every five days and evaluated in the laboratory to monitor changes in the characteristics of liquid cheese waste during the treatment period, which was 30 days. The indicators (pH, EC, TDS, TSS, COD, and Alkalinity) were used, and a total of 72 tests were performed throughout the research period for each indicator. The results appeared that the first anaerobic reactor with the combination removed 95.1 % COD, whereas the second reactor that did not contain the mixture removed 94.1 % COD. The anaerobic reactors are very efficient in treating COD; the COD removal rate in the first reactor with the combination was 1.9 %, while the COD removal rate in the second reactor without mixing was 94.1 %. The increase in pH in the first and second reactors, followed by achieving the neutralization value, is proof of anaerobic reactor success. Total dissolved solids removal was achieved in anaerobic reactors in the first reactor (7.5 %) and peaked in the second reactor (17.83). The proportion of TSS removed in the first anaerobic reactor was 57.9%, and in the second reactor, it was 60.3 %. From all above can be concluded that the presence of mixing had a slight and negligible positive effect on the anaerobic reactors
Keywords. Mixture, Liquid Waste, Cheese Industry, Anaerobic reactors.
INTRODUCTION
During the previous century, pollutants from human activities have contaminated the waters of rivers and lakes, causing negative consequences and major difficulties in the aquatic environment and the living animals that live there 1. Human-caused pollution in the aquatic environment occurs via industrial wastewater or residential wastewater, which is disposed of without treatment, causing contamination in rivers, lakes, and natural streams 2. The dairy and cheese industry is one of the food industries whose liquid wastes contribute to water pollution because of the high levels of organic matter and fats in its waste products, as well as the high temperature of its waste products, which raises the water temperature, causing losses to ecosystem components, and this is the current trend in many countries. The reuse of industrial wastewater in general, once it has been treated in a manner that does not harm the ecology, is hampered by water constraints 3 . Temperature, pH, alkalinity, presence of toxic substances, amount of discharges entering the reactor, quality of the wastes being treated, availability of nutrients used by decomposing anaerobic organisms, rate of the final removal of toxic substances by anaerobic fermentation, the concentration of pollution inside excretions, sludge residence time (SRT), hydraulic retention time are all factors that influence the rate of anaerobic biological treatment efficiency (HRT)4. The anaerobic digestion process happens in three stages. First, bacteria transform organic food molecules (carbohydrates, proteins, and lipids) into (liquid polymers of fatty acids and amino acids) and monosaccharides, as shown in this equation, which illustrates the hydrolysis of complex sugars into simple sugars 5. The second stage is (Acidogensis) The acid-producing bacteria transform the results of the first-stage reaction into a short chain of volatile acids (ketones alcohol, hydrogen, and carbon dioxide), with ethanol (C2H5OH), methanol (CH3OH), and propanoic acid as the primary products (CH3CH2COOH). Acetic acid (CH3COOH), butanoic acid (CH3CH2CH2COOH), lactic acid (C3H6O3), and formic acid (C3H6O3) are some of the most common acids (HCOOH). The equations below show the second-stage processes in which glucose is transformed into ethanol, propanoate, and acetic acid are shown in the equations below 6. The third stage is (Methanogenesis), the last stage during which microorganisms convert hydrogen and acetic acid generated from acid generators into methane and carbon dioxide 7. The stabilization of waste is completed when methane and carbon dioxide are produced. The following equations show the reactions taking place in the last stage.
MATERIALS AND METHODS
Anaerobic Reactor Design
Two anaerobic treatment reactors were manufactured of thick (10) mm glass, identical in form and size, with dimensions of (30 x 30 x 30) cm and 27 liters each. Each anaerobic reactor has a heater set at (35) °C, a sampling hole, a sample entrance hole, and a cleaning aperture at the bottom of the reactor. The first reactor contained a mixer with a speed of (70) Circular/ minute, and it was connected to the (Arduino) device, which was programmed to run the mixer (10) minutes/hour, as in Figure (1). The second anaerobic reactor was without a mixer shown in Figure 2.
Anaerobic biological treatment of dairy products
The work of the anaerobic reactors that were made in this study was limited to the treatment of liquid wastes for the manufacture of cheese. The samples of liquid wastes for the dairy factory were kept in sealed plastic containers and kept away from sunlight until they were used for anaerobic treatment. These anaerobic reactors were connected to the electric current and constantly monitored to ensure treatment flow. At the end of the third week of treatment, the anaerobic fermentation process took place in the first and second reactors, and we noticed the color change from white to dark brown, as in figure 3. 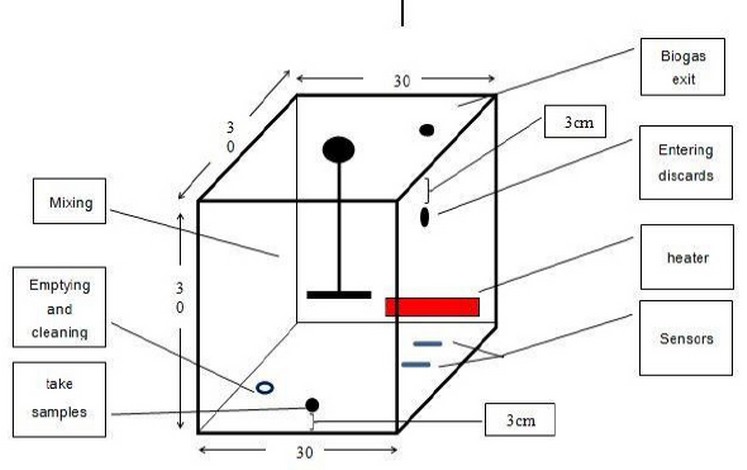 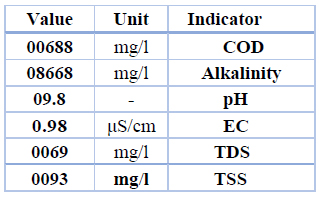 Table 2. Results of the first anaerobic reactor (with mixer)

Table 3. Results of the second anaerobic reactor (without mixing)
DISCUSSION
Chemical Oxygen Demand (COD)
The amount of (COD) was very high in this waste, and this is due to the nature of the cheese-making subtractions, which are characterized by an increase in their organic load and an increase in temperature as well, and thus will consume oxygen8.  Anaerobic reactors achieved excellent removal of (COD) and this is due to the sufficient time for anaerobic microorganisms and their consumption of good amounts of organic matter9 and the value of COD after the end of the treatment period in the first reactor was (3980) mg/liter and was In the second (4730) mg/liter.
Alkalinity
The tests for liquid excretions for the cheese industry before starting treatment indicated that the basal concentration was high. Its concentration reached (10660 mg/L) and the basal concentration increased with a decrease in the pH value. This increase is due to reducing the concentration of volatile fatty acids (VFA) and the collection of acidophilic bacterial masses 10. All anaerobic processes occur together and in succession, such as hydration, decomposition, formation of acids and production of methane, and under appropriate environmental conditions for each stage within anaerobic reactors, which leads to fluctuations in the basal values. The slight increase in the basal concentration during anaerobic processes may be Because methane bacteria quickly withdraw hydrogen from the solution during the production of methane gas, which is according to what was shown. After the treatment in the first reactor, the basal values reached (5400) mg/L and arrived in the second reactor (at 6100) mg/L.
Acidity (pH)
Its value was low (3.9), and this is due to the conversion of milk lactose to lactic acid and the use of detergents that contain caustic soda and nitric acid11. The values of the acidity after the completion of the treatment in the first reactor reached (7.95) and reached (7.99) in the second reactor.
Electrical conductivity (Ec)
The liquid wastes have high electrical conductivity, and their value before treatment (4950 micro Siemens/cm), and this rise is due to the presence of inorganic salts. After treatment, the electrical conductivity value in the first reactor reached (4533) mg/liter and in the second reactor (4580) mg/liter.
Total Dissolved Solids (TDS)
In most cases, the concentrations of total dissolved solids (TDS) of liquid wastes for cheese making are relatively high due to the liquids containing dissolved salts and organic materials12. The total dissolved solids value after treatment in the first reactor was (3205) mg/L, and in the second, it amounted to (2847) mg/L; this decrease is due to the anaerobic decomposition process13
Total Suspended Solids (TSS)
The presence of high concentrations of degradable organic matter in the liquid wastes for the manufacture of cheese will lead to an increase in the concentration of total suspended solids, and the TSS value before treatment was (3452) mg/liter. The value of the total suspended solids after treatment in the first reactor was (1451) mg/liter, and in the second, it amounted to (1369) mg/liter. The following tables show the results of tests during the research period for the first and second anaerobic reactors.
CONCLUSION
We conclude that processing milk wastes is booming and requires only an expansion in the size of the treatment plant, according to what we have found. In addition, the second reactor without the mixture is the most efficient where they worked; the COD removal and the rise in the pH value reaching the neutralization value is evidence of the success of the second reactor. And also  TSS removal by the second reactor.
Funding: "Author funded this research
Acknowledgments: The authors would like to extend thanks and gratitude to all who support us in completing this project.
Author conflict: No conflict
REFERENCES
1.      Eckenfelder, Jr. W.,"Industrial Water Pollution Control", 3rd Edition, McGraw Hill International Edition, Singapore, (2000).
2.      Davies, P. S.The Biological Basis of Wastewater Treatment. Strathkelvin Instruments Ltd, 3.2005.
3.      Dennis A. Burke P.E.,'' Dairy Waste Anaerobic Digestion Handbook'' Environmental Energy Company,2001; Vol. 17.
4.      Harris, P. Biogas, University of Adelaide, Astralia.2010.
5.      Lange, M., Westermann, P. and Ahring, B.K., 2005. Archaea in protozoa and metazoa. Applied microbiology and biotechnology, 66(5), pp.465-474.
6.      Hendrickson, E.L. and Leigh. J.A.Roles of Coenzym e F420- Reducing Hydrogenase and Hydrogen.2008
7.      Uzodinma, E.O.; Ofoefule, A.V.; Eze.; JI; Mbaey, I. and Onwuka, N.D. Effect of Some Organic Wastes on the Biogas Yield from Carbonated Soft Drink Sludge, Scientific Research and Essay.2008.
8.      Kelessidis A and Stasinakis AS. Comparative Study of the Methods Used for Treatment and Final Disposal of Sewage Sludge in European Countries, School of Science and Technology, Greek Open University. Patra , Greece.2012.
9.      Mohan ,S.V., R.S.,Prakasham , B. Satyavathi , J. Annapurna and S.V. Ramakrishna. Biotreatability Studies of Pharmaceutical.2001.
10.  Britz ,T.J., C.Van Schalkwyk and Y. Hung.Treatment of dairy processing wastewaters. Waste Treatment on the food processing Industry,2006; :1-28.
11.  Tikariha A, Sahu O. Study of characteristics and treatments of dairy industry waste water. Journal of applied & environmental microbiology. 2014 Jan 17;2(1):16-22.
12.  Dhanam S. Effect of dairy effluent on seed germination, seedling growth and biochemical parameter in Paddy. Bot Res Int. 2009;2(2):61-3.
13.  Kolhe, A.S. and V.P. Pawar . Physico-chemical analysis of effluents from dairy industry. Recent Research in Science and Technology,2011; 3(5): 29-32
Received: 29 JAnuary 2022 / Accepted: 9 March 2022 / Published:15 May 2022
Citation:   Dawood Salman D, Qasim Turki W, Riad Khudhaier. Comparison between the presence and absence of mixing in the anaerobic bio S logical treatment of liquid waste for the cheese industry. Revis Bionatura 2022;7(2) 41. http://dx.doi.org/10.21931/RB/2022.07.02.41
Back to content