Caicho Jhonny and Mena Kevin
Available from: http://dx.doi.org/10.21931/RB/2020.05.02.15
ABSTRACT
In the present medical field, scientists have designed new techniques to improve human health. These techniques focus on control at the molecular level. Small interference RNA is an example of genetic control. This, together with Dicer and Argonaute 2, do not allow the transcription process to synthesize new protein. By using this mechanism, it is possible to control some diseases that are responsible for metastasis, such as lung cancer. Some experiments were conducted to prove the effectiveness of this technique. However, the problem is how to introduce the double-strand RNA to the cells. The issue was solved using NPs as nanocarriers. This review paper aims at making a brief overview of lung cancer, the siRNA mechanism, and some different targeting techniques.
Keywords: - siRNA, dsRNA, lung cancer, AGO2-Dicer complex, nanoparticles.
INTRODUCTION

Nowadays, Lung cancer remains the first cause of cancer death in the world1. It is estimated that just in 2012, approximately 1.8 million people were diagnosed with lung cancer, leaving a more incredible figure of 1.6 million deaths, producing more deaths than breast, colon, and prostate cancer together. And they are commonly affecting male smokers2. Besides, another of the big enemies that we need to fight is metastasis, which is the cause of more than 90% of cancer deaths in the world. Metastasis is a multistep process by which cancerous cells colonize distant parts of the body (concerning the original site of the tumor growing) and also by which malignant cells became resistant or immune to cell apoptosis3. It is essential to understand that day by day, and more people are going to increase these figures. Probably one of the main reasons for these alarming phenomena is due to the current procedures that are used to treat lung cancer patients, such as surgery, chemotherapy, and oral drugs, which remain ineffective or poorly effective. A few years ago Fire and Mello discovered RNA interference (RNAi), which has shown great potential in the treatment of a vast range of diseases in an innovative way, and within those diseases metastatic cancer. RNAi action processes could be defined as simple as the selective silencing of targeted genes4. Some problems that this relatively novel technique presents are related to the stability of the RNAi strands when those are inside the body and their capacity to bind the desired genes to avoid their expression correctly. In this way, many biological and artificial vectors were developed to achieve the perfect carrier, a carrier that could overcome these barriers. Nanotechnology is one of the fields that many scientists around the world chose to develop it due to its huge range of possibilities of components, combinations, and functionalization that could be performed to modify the properties of the final nanoparticles, their chemical stability, and their relative low cost5. Here we present some of the most exciting procedures that combine these two technologies (RNAi or siRNA + Nanoparticles) to change the way that we deal with and how we treat lung cancer.
Lung Cancer

Cancer occurs when specific healthy cells begin to grow out of control. Cancer alters cell metabolism6. Commonly cancer cells develop due damage in the DNA. Although this damage can be controlled by specialized cells, in cancer cells, damaged DNA cannot be repaired, and these cells do not die. Generally, cancer cells look like a solid tumor, except in the case of leukemia. When these tumors are advanced, they enter the metastasis phase7. Metastasis is a complex process where tumor cells replicate out of control, thus expanding to other organs. Due to their functional structure, high vascularity, and high levels of oxygen lungs are perfect for developing metastasis because they provide a nutrient-rich environment8.
Cancer is the leading cause of death in the 21st century. Lung cancer is the most frequently represented because it causes 18.4 % deaths out of 9.6 million, mainly in males1. The relation between smoking and cancer was first established in 1930 when clinicians identified this uncommon disease9. At present, the causes are: genetic or environmental. The genetic causes are DNA mutations and parental inheritance7. Environmental carcinogens agents are smoking of cigarettes, air pollution, and occupational exposure10. The smoking intensity and average life are directly associated; therefore, this increases lung cancer2.
Moreover, exposure to asbestos and radon also increases this possibility. There are two types of lung cancer: non-cell lung carcinoma (NSCLC) and small cell lung carcinoma (SCLC)11. Thus, it is essential to distinguish these types and the consequent treatment they need.  Currently, there are some lung cancer treatments such as surgery resection, chemotherapy, immunotherapy, hormonal therapy, and radiotherapy7. Surgical resection is accepted for treating lung metastasis. However, it is not too useful because it only allows 5-year survival for patients8.

In the present, a new type of treatment had been developed. It is called targeted therapy inhibitor, for example, Gefitinib. Gefitinib is an inhibitor that targets tyrosine kinase to epidermal growth factor receptor (EGFR). Another targeted therapy use liposomes with arginine. It is used to encapsulate human double-minute 2 (HDM2) gene to specific siRNA and low-density polyethylene (LPD) nanoparticles for delivery siRNA to lung cancer cells11. This alters the major cell-signaling and regulatory pathways10. Recent advances in cancer treatment are the use of small interfering RNAs (siRNAs)7. These molecules do not allow the replication process; therefore there is no synthesis of a new protein.

siRNA mechanism
Small interference RNA (siRNA), or also called post-transcriptional gene silencing (PTGS), is a biological mechanism that silences genes that affect the DNA replication process12. siRNA is a type of RNA interference with 21-23 nucleotides13,14. The phenomenon was discovered in the late 1980s in plants by Napoli et al. 14,15. Later, similar events were found in Caenorhabditis elegans16. They concluded that the silencing of the mechanism occurs due to mRNA degradation17.
Furthermore, the functions of siRNA are protected from viruses and defense against transposable or transposons genes16. In mammal cells, the primary purpose is endogenous protection against cancer cells. This process differs in plants and mammals’ cells. The first one is a transcriptional and post-transcriptional process, while the second one is only post-transcriptional13. Therefore genetic silencing is a novel method to limit transcription or active a sequence to degradation process18.
Genetic expression is possible to interrupt a process called genetic silencing19. It starts with the degradation of exogenous double-strand RNA (dsRNA) into siRNA by an enzymatic complex. siRNA hybrids the complementary regions of mRNA. When dsRNA is introduced into the cells, it interacts with Dicer. Dicer is an enzyme that cleavages the long double-stranded RNAs into shorter fragment (siRNA)17. These short fragments have an extreme nucleotide 3`and 5´free13. These extremes are recognized by Argonaute 2 (AGO2), forming AGO2-RISC-Complex enzyme14,20. When this complex is built, siRNA is transformed into a single strand that guides the enzyme complex to mRNA. AGO2-RISC-Complex interacts with mRNA and cleavage it by Ago2 21,22. Finally, mRNA is degraded; thus, the replication process is not allowed14. (Figure 1) 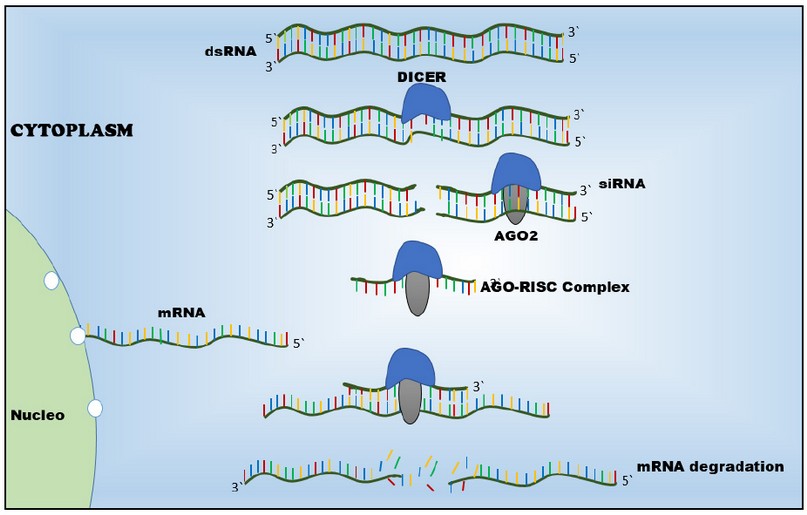 Figure 1. Gene silencing mechanism of siRNA. dsRNA is processed by Dicer into siRNA. After dsRNA is broken, Argonaute 2 interacts with it forming AGO-RISC Complex. siRNA guides these enzymes to mRNA because it has a site that recognizes mRNA. Later, AGO2 cuts mRNA, which finally is degraded, so there is not protein synthesis.

siRNA is a molecular mechanism that shows the potential for the treatment of a disease such as cancer23. This technique is emerging as innovative nucleic acid treatment11. In contrast, traditional chemotherapy is widely accepted in the fight against metastasis. However, chemotherapy is harmful and toxic for the body giving the patient a lower quality of life8. Besides, chemotherapy affects not only malignant cells but also surrounding cells. Therefore, there is severe damage to the patient´s body.

siRNA has high specificity, high efficiency, and low toxicity. Thus, it is a potential treatment for targeted genetic silencing8. However, siRNA is unable to enter into the cells without a transporter or nanocarriers. These transporters can be natural or synthetic12. Natural carriers can be viruses and bacteria, while synthetic transporters can be a self-assembled nanoparticle that is introduced in the tumor by intravenous administration24. The characteristics mentioned above make siRNA an efficient technology for oncology therapies because it allows us to silence specific genes, thereby stopping the protein synthesis12.
siRNA studies for cancer treatment
As described above, siRNA opened a huge door in the fight against cancer because of  its role in the regulation (down-regulation) of the gene expression through sequence-specific post-transcriptional gene silencing25,26. Nonetheless, some of the main issues that siRNA silencing presents are: 1) The limited half-life of the uncovered strand of siRNA into the body due to the action of RNases and their low chemical stability in biological environments26. 2) The fact that systemic delivery of siRNA could produce adverse effects on the patient as liver toxicity and activation of immune responses. 3) The fact that it is practically impossible for the siRNA strands to enter the cell through diffusion due to its relatively large size and its negative charge27.
All these points made evident the necessity to develop a drug carrier that efficiently distributed the siRNA strands into the cancerous cells avoiding these barriers and minimizing the toxicity and the adverse effects in the patients28. There is where nanoparticles, liposomes, nanoplatforms, and nanotechnology, in general, came to have an essential role in the improvement of siRNA and its potential to affect cancer26,27. Since many target genes have been identified in lung cancer, until 2015, six clinical trials were undertaken with nanoparticle-based siRNA delivery systems29.
For this article, seven different cancer-targeting techniques were analyzed, reflected in table 1. These targeting techniques go from single gene targeting to more specialized techniques such as the work performed by Yang et al. in 2011 with a system that wants to prove a combination of ways to reduce tumor growth using: 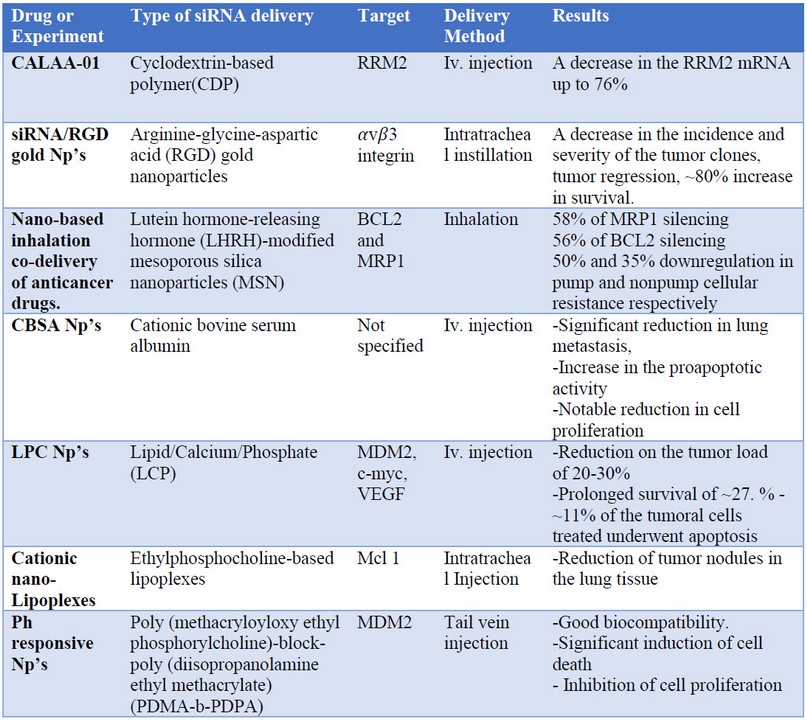 Table 1 A summary of the procedures analyzed where specified: the drug or experiment used, type of siRNA delivery, target, delivery method, and the result obtained.
At the end of their investigation, Yang et al. reported:
·        A reduction in the tumor load of 20/30 (%).
·        Prolonged survival of ~27%.
·        ~11% of the tumoral cells treated underwent apoptosis.
A remarkable job was performed by Davis et al. from 2008 to 2013 when the first official clinical trial was done by targeting the subunit M2 of Ribonucleic Reductase (RRM2) to reduce the growth potential of the cancer cells34. The hearing focused on solid tumors was probed in 24 patients and reported a decrease in the RRM2 mRNA up to 76%. Despite these encouraging results, these techniques need to be improved and refined for future applications.
We also have the reports of Han et al. that synthesize Self-Assembled nanoparticles by the use of cationic bovine serum albumin (CBSA) with a significant reduction in lung metastasis, an increase in the proapoptotic activity and a notable decrease in cell proliferation33. As in the case of these three examples, all the procedures analyzed show positive results in the reduction or elimination of cancerous cells in the experiments carried out in vitro and in vivo.
CONCLUSION
RNA interference therapy is used to silence a selective gene expression. Thanks to this, it is possible to control the not healthy growth of tumor cells. dsRNA is introduced as exogenous genes that interact with Dicer getting siRNA. When AGO2 is linked, it forms AGO-RISC-Complex. siRNA server as a guide to the complex for attaching to mRNA. Finally, mRNA is degraded. As a result, the new protein cannot be synthesized. From the current review, we can conclude that although there is still entirely to investigate, siRNA is a reasonably powerful technique in the war against cancer and many other diseases for which we do not know a cure today. Nanotechnology also does not fail to present opportunities to promote innovative techniques for the development of biomedicine and health care.