Andreina Gómez2, Beatriz Pernía3, Lizbeth Zamora1 and Lilian M. Spencer *1,2
Available from: http://dx.doi.org/10.21931/RB/2021.06.02.25
ABSTRACT
Malaria is a disease caused by a protozoan of the genus Plasmodium in humans and vertebrates. It has a high morbidity and mortality rate, especially in pregnant women living in countries with high transmission rates. Murine models have been an excellent tool to evaluate the effects of malarial infection in the mother-fetus relationship. For this reason, we evaluated the effect of malarial infection on fetal development at the beginning and middle of the gestational period in BALB/c mice infected with Plasmodium berghei ANKA. Our results show that malarial infection at the beginning of pregnancy markedly affects the development of the fetus in size, weight, and development of its limbs so that the control of the pregnant mother is relevant at the beginning of gestation
Keywords: malaria, loss weight, rodent, gestational period
INTRODUCTION
Malaria is an endemic tropical disease with a high incidence among women and children. It is therefore considered a significant public health problem. World Health Organization (WHO) reported pregnant women in sub-Saharan Africa to show high malarial infection1. In 2019, WHO estimates 12 million pregnancies with malaria infection and 822.000 children with low birth weight2.  Reflecting a high morbidity and mortality rate after infection as medical complications such as anemia, intrauterine growth retardation, low birth weight (LBW), and neonatal death occur 3,4. The vulnerability of pregnant women to malaria increases in the first and second trimesters of the gestation period. However, there is some debate as to whether hormonal and immunological changes increase malaria sensitivity in pregnancy5. As a result, prenatal diagnosis and control are complex. Besides, known drugs are less effective due to resistance generated by parasites 6.
Malaria infection in pregnant women occurs when intracellular Plasmodium falciparum parasites accumulate and interact with chondroitin sulfate A (CSA) receptors, resulting in placental malaria5,6. The malaria-infected placenta has a thickened trophoblastic basement membrane that acts as a protective measure for the baby against increased cytokines that damage the placental tissue. Therefore, morphological alterations of the membrane directly affect the pathological conditions of the fetus7. The placenta has parasites that express antigens on its surface, known as variant surface antigens (VSA)5. The VSA of the malaria parasites prevents them from being recognized by the human immune system as they belong to the Plasmodium falciparum erythrocyte membrane protein 1 (PfEMP1)8.
Meanwhile, the VAR2CSA protein present in malaria-infected red blood cells recognizes CSA in pregnant women, causing it to accumulate in the placenta. The parasites infect other red blood cells that will accumulate in the placenta9. Chronic malaria infection is related to low birth weight by restricting space for development, while the acute infection is related to early termination of pregnancy10.
Plasmodium falciparum infection is the type of malaria with the highest incidence in pregnant women because infected red blood cells bind more quickly to the placenta during the gestation period11,12. Several experimental models of malaria infection reproduce the immune responses of the disease. Rats and mice are infected with Plasmodium vinckei, Plasmodium yoelii and Plasmodium berghei, among others13. To study malaria in pregnant women, the Plasmodium berghei ANKA strain is used in murine animals because it mimics the infectious process of chronic malaria in the gestation stage that occurs with Plasmodium falciparum in humans 10. Specifically, pregnant BALB/c mice infected with Plasmodium berghei develop complications such as decreased fetal size, premature birth, slowed uterine growth, and postnatal growth problems 13,14. The factors presented above are related to the placenta's nutritional deficit, which is essential for a healthy pregnancy 15, 16.
This work aimed to determine in which gestation period the malarial infection is more deleterious to fetal development at the beginning or middle of gestation. For this, we evaluated the weight, size, and limb development in fetuses from pregnant BALB/c female mice.
MATERIALS AND METHOD
Experimental infection and appearance of the female BALB/c mice
Mice reared under specific pathogen-free conditions and with food and water ad libitum in the animal laboratory at the Simón Bolívar University. Female mice of 12-week-old were mate with a young puberty male mouse. When the formation of the vaginal plug was verified the next day, the male was separated from females in each group17. In this study, pregnant females were divided into three experimental groups with six mice per group (Figure 1 presents the experiments with mice). One control group that was not infected with Plasmodium berghei ANKA strain and two groups that were infected with the parasite at the beginning (second day after of formation vaginal plug) of gestational and in the middle of the gestational period (eighth day after of formation vaginal plug). 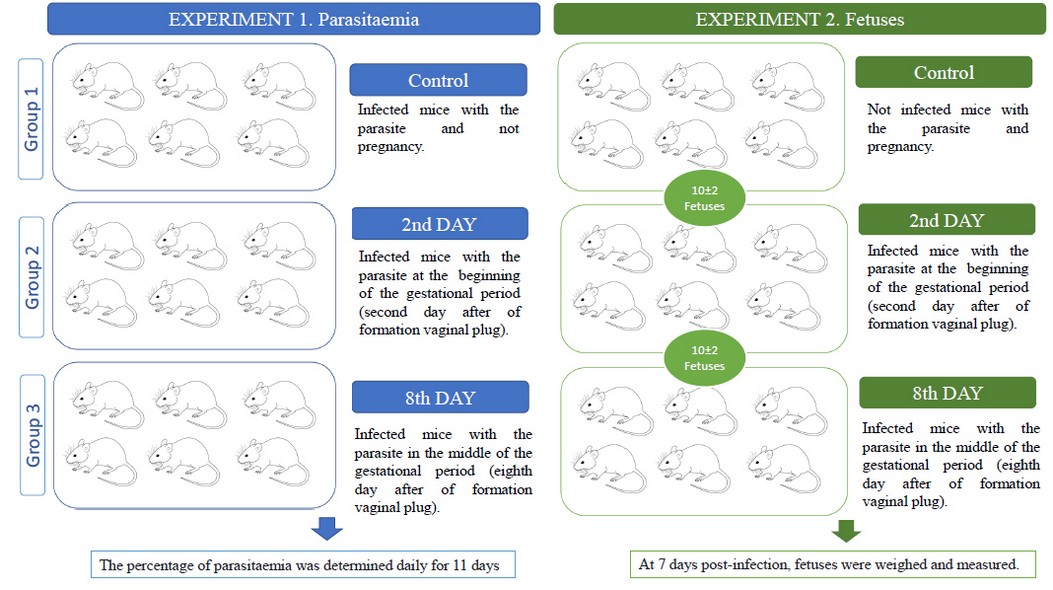 Figure 1. Experimental mice groups to evaluate the parasitaemia and physical conditions of fetuses. One control group was not infected with the ANKA strain of Plasmodium berghei, and two groups infected with the parasite at the beginning (second day) of gestational and in the middle of the gestational period (eighth day).
The parasite used for the challenge was the lethal ANKA strain of P. berghei; the parasite was stored at -80°C and passaged once in a mouse before use in these experiments. When the parasitaemia was 40%, parasitized red blood cells (PRBCs) were isolated using a cellulose column (CF-11, Sigma, with NaCl 0.85% solution). After, the trophozoites and schizonts were isolated by a discontinuous Percoll column (60, 70, and 80% gradient in ascending order)18.
The parasite challenge was administered by intravenous injection of five thousand PRBCs to two experimental groups at the 2nd and other at the 8th days of the gestational period. Six mice were placed for each group and the control group that were not pregnant but if infected with P. berghei. Erythrocytic stage parasitaemia was assessed daily on smears made from tail blood from infected mice and stained with Giemsa's reagent to determine percentage of parasitaemia. These experiments were carried out twice to evaluate the effect of parasite infection on the fetuses.
In summary, we conducted two experimental groups of pregnant and infected mice. One of them to determine parasitemia and the other to determine the conditions of the fetuses depending on the day of infection with the parasite
Fetus extraction and evaluation in size and weight
At 7 days post-infection, pregnant mice of the groups infected with P. berghei on the 2nd and 8th day of gestation were sacrificed, and their uterine sacs were opened (using a longitudinal incision on the mesometrial side); each mouse pregnant had an average of 10±1 fetus. Then, we macroscopically evaluated the fetuses. Which were washed with a physiological solution and weighed to determine their weight on balance Sartorius Entris II model (g), fetal length with a calibrate Vernier (cm), and external anatomical characteristics such as the development of the extremities.
The experiments described in this study were carried out following the laboratory's standards and the Bioethics Committee of the Simón Bolívar University.
Statistical analysis
To analyze whether the data presented a normal distribution, both Anderson-Darling and Levene tests for homoscedasticity were applied. Subsequently, to compare the percentage of parasitaemia between treatments, a two-way ANOVA test (p <0.001) was applied, followed by a Dunnet test. Then, to compare the fetuses' weight and length, a non-parametric Kruskall-Wallis test was applied (p <0.001). The graphics were made using the R program version 4.0.2.
RESULTS
Figure 2 shows the percentage of parasitaemia during the infection, where it is evident that pregnant mice presented higher percentages of parasitaemia than non-pregnant control mice. On day 7 after infection, a significant difference is clearly shown between the three groups of mice infected with the parasite (F = 46.28; p ≤ 0.001). With a percentage of parasitaemia of 60.0 ± 10.0% (green line) in mice inoculated on day 8 and 33.3 ± 5.8% in those inoculated on the second day (pink line), compared to control 6.8 ± 2.0% (blue line). 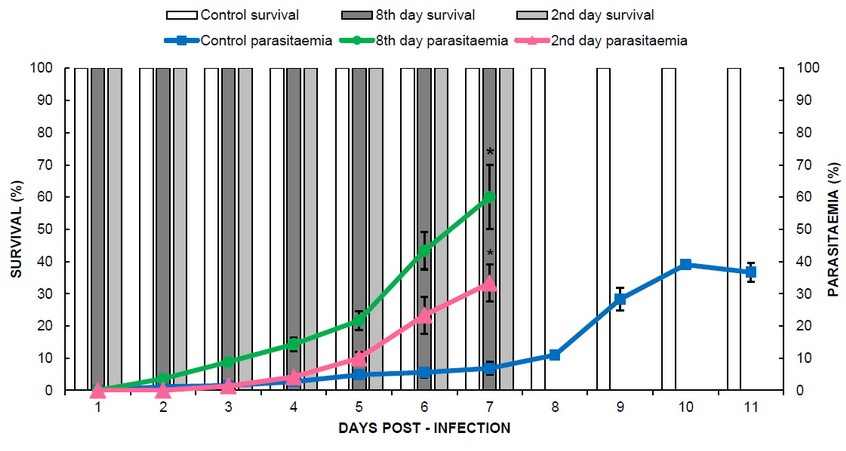 Figure 2. Percentage of parasitaemia over time and survival of control and pregnant mice inoculated on the 2nd and 8th day of gestation. Asterisks (*) indicate significant differences according to ANOVA and Dunnet a posteriori test (p <0.001).
A difference was also evident concerning the days of survival, which are represented with a white bar for the control group, light gray for the group infected at the beginning of pregnancy (2nd day), and dark gray for the group of mice infected at the middle of pregnancy (8th day of gestation). Mice in the control group survived until day 11 post-infection, while mice inoculated on the second and eighth day of gestation died on day 7 post-infection. However, in the control group, the highest parasitaemia was 39% on day 10 post-infection.
Figure 3A shows fetal length in pregnant mice with 9 to 12 fetuses per placenta. Regarding the length of the fetuses, it was affected by infection with P. berghei, and a decrease in the median was observed, corresponding to the fetuses where the mothers were inoculated on the second day of pregnancy (H = 16.04; p ≤ 0.001). The median fetal length in control fetuses was 1.5 cm, while fetuses from mice inoculated on the 2nd-day of pregnancy had a median fetal length of 1.2 cm, with a range of 0.9 to 1.5 cm.
Similarly, the fetus's weight was affected by infection with P. berghei (Figure 3B). The control group weighed 3.1 g, higher than the median of 2.6 g (H = 16.76; p ≤ 0.001). However, the results showed no significant differences in fetal weight between inoculation day 8 and controls. Therefore, there is a marked influence on the effect of infection during pregnancy and the fetus's size.
Figure 3C shows images of fetuses from the three study groups. Apparent differences in the development of mouse fetuses can be observed between infected and non-infected pregnant mothers. The fetuses of mothers infected at the beginning of pregnancy have size and weight obviously below that of fetuses from the control group. The poor development of the hind limbs was also evidenced in comparison to the other two groups of fetuses of the mothers studied. 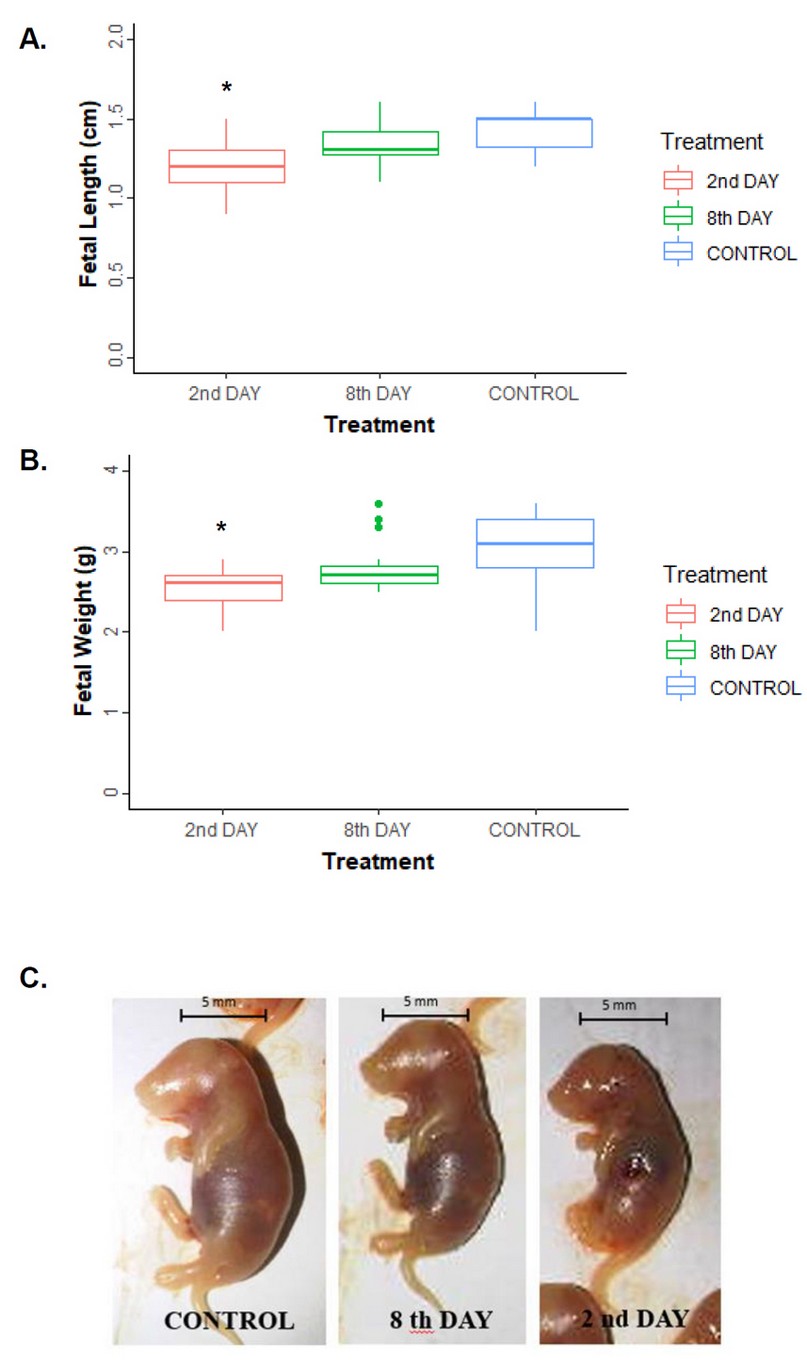