I Putu Sudayasa1, Suryani As’ad1, Rosdiana Natsir1, Venny Hadju1,  Mochammad Hatta1, Muh. Nasrum Massi1, Burhanuddin Bahar1, Sri Rahmadhani1, Yusminah Hala2,La Ode Alifariki3*
Available from: http://dx.doi.org/10.21931/RB/2020.06.02.9
ABSTRACT
The high number of vitamins and minerals in Pokea meat encouraged us to determine the effect of consuming Pokea meat on Nitric Oxide Plasma levels in patients with hypertension and normotension. This study aimed to analyze Pokea meat consumption (Batissa violacea var. celebensis von Martens) on plasma oxide (NO) levels in hypertensive patients in Sampara, Konawe District. This research uses an observational analytic method with a case-control study design through molecular biology approach. The sample comprises 60 people consisting of 30 case samples and 30 control samples using the purposive sampling technique. Laboratory examination data is on NO plasma levels. Statistical analysis used data analysis use-dependent t-test. The distribution of Pokea meat consumption variables in the Hypertension group respondents had a mean value of 35.14 ± 17.66, while in the Non-Hypertension group of respondents was 41.10 ± 19.82. In the variable nitric oxide, the Hypertension group had a mean and standard deviation of 69.48 ± 42.78 µmol / L while the Non-Hypertension group had a mean and standard deviation of 262.8 ± 39.90 µmol / L. The statistical test analysis results showed an effect of Pokea consumption on plasma NO levels (p = 0,000). Pokea Consumption Influences NO Plasma Levels in Hypertension Patients, and there are also differences in NO Plasma Levels in Patients with Hypertension and non-hypertension in Sampara District, Konawe District, Southeast Sulawesi.
Key-words: hypertension, nitric oxide plasma, Pokea clam, sampara

INTRODUCTION
Pokea clams or Batissa violacea var. celebensis von Martens (1897) are bivalves belonging to the Corbiculidae family and are a type of freshwater clam fish located in the Southeast Sulawesi region 1. Pokea is scattered in several large islands in Indonesia such as (West Papua, Sumatra, Sulawesi, Java), while in Sulawesi, particularly in Southeast Sulawesi's waters, especially in large rivers such as Pohara River, Lasolo River, Roraya River, Laeya River 2.
In 100-gram clam meat contains Clam meat is rich in omega-3 and omega-6 fatty acids and contains 59 kilocalories of energy 3. The amount of protein in shellfish is an average of 8 grams. This protein plays an essential role in the formation of enzymes in the body, the formation of organ cells and muscles, the formation of hormones, repair damaged cells in the body, regulate metabolism, form the immune system, and as a source of energy 3,4.
Yenni and colleagues' research regarding the proximate analysis of Pokea clam meat showed 50.48% protein content, 6.86% fat, 29.13% carbohydrate, and 5.53% fiber, and 2.70% water. Pokea meat contains the highest protein content of more than 50%, the moderate fat content of more than 5%, and more than 20% of carbohydrate content based on its dry weight. The nutritional content of Pokea is equivalent to several types of mollusks, which are empirically believed to be aphrodisiacs, increase reproductive vitality, treat fever, jaundice, and reduce blood pressure overcome hypertension 5.
Suryana, in her study, found a significant difference in respondents' Nitric Oxide levels in the Non-Hypertension and Hypertension groups with a value of p <α (p = 0.023). The mean value of Nitric Oxide levels in the Hypertension group was lower than Non-Hypertension. Likewise, Tadei and colleagues' results also show that the mechanism of blood vessel endothelial dysfunction is associated with a decrease in plasma NO levels 6.
Hypertension is ranked first among the 10 highest non-communicable diseases compared to acute respiratory infections in Southeast Sulawesi. Specifically, in the City of Kendari, hypertension ranks the third most disease 7.
The high number of vitamins and minerals in Pokea meat encouraged us to determine the effect of consuming Pokea meat on Nitric Oxide Plasma levels in patients with hypertension and normotension.
METHODS
This study is an observational analytic with a case-control design conducted in March-August 2019, in the Sampara District area. Using a purposive sampling technique, 60 respondents were selected, consisting of 30 case samples and 30 control samples. Sources of data regarding hypertension patients were obtained from the Sampara Health Center. Blood pressure confirmation is measured with a Sphygmomanometer. The research instrument was a Pokea meat consumption questionnaire, Semi-Quantitative Food Frequency Questionnaire (FFQ-SQ). Nitric Oxide Plasma levels are measured through venous blood collection and examined at the Hasanuddin University clinical laboratory approved by the Medical Faculty of Hasanuddin University (230/UN4.6.4.5.31/PP36/2019). Data analysis used a dependent t-test. Based on the Kolmogorov Smirnov test using SPSS V. 16.00, the data were normally distributed.
RESULTS 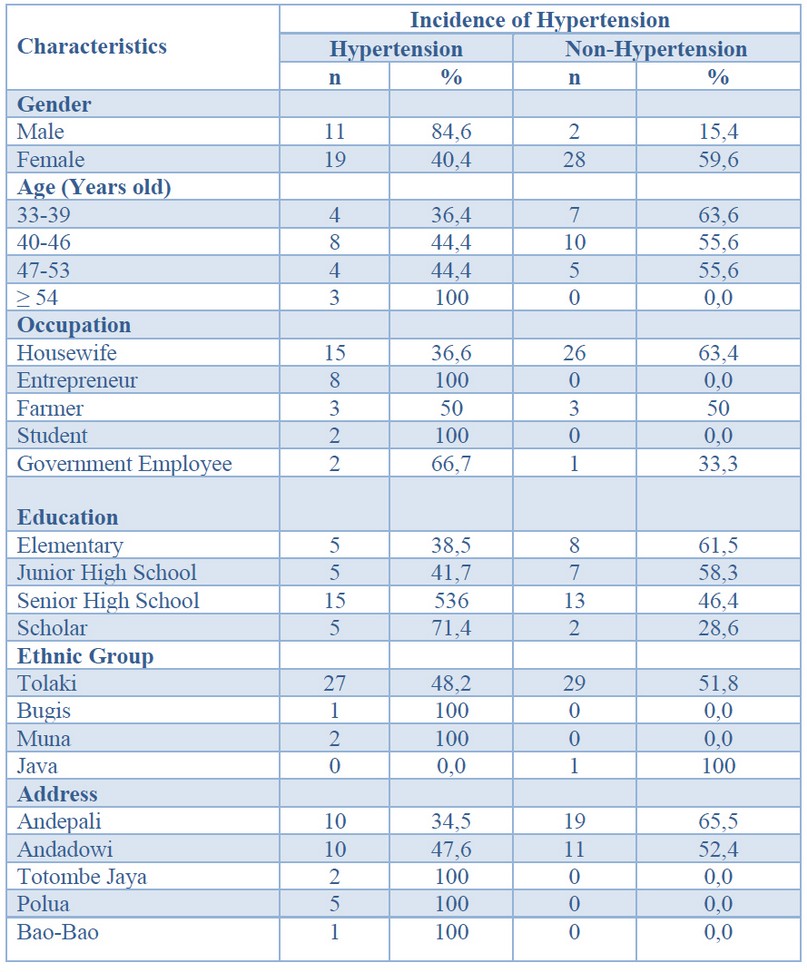 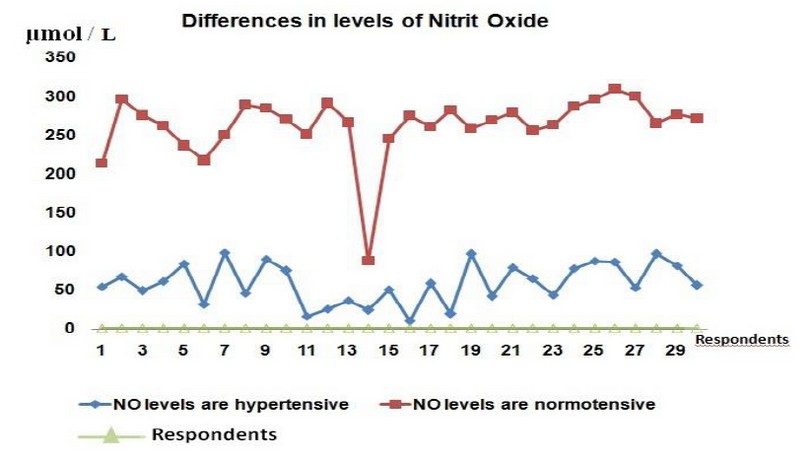 Figure 1: Differences in levels of Nitric Oxide Plasma in patients with hypertension and not hypertension
Figure 1 shows the differences in nitric oxide levels (NO) in the Hypertension and Non-Hypertension groups, where the levels of nitric oxide (NO) in the Hypertension group are lower than those in the hypertension respondents.
DISCUSSION
Distribution of consumption of Pokea meat, nitric oxide plasma levels
During the initial interview with respondents (Hypertension and Not-Hypertension), it was revealed that 66.7% consumed Pokea meat 1-3 times and> 3 times a day as much as 33.3% of respondents. We also found that the Non-Hypertension group had a higher Pokea meat consumption pattern of 41.10 grams per day than the Hypertension group with a consumption pattern of 35.14 grams per day.
Based on the results of our observations on the community in the village of Andepali, Sampara District, Konawe District, 85% of respondents found that they often consumed Pokea meat in the last three months. with a proportion of 58% of respondents stating that they eat Pokea clam meat as much as 1-3 a day and as many as 57% consume Pokea with a portion of ½ -1 cup. Around 46% of the community obtains Pokea from the market or traveling vendors, and the others 78% process Pokea directly. In general, the type of processed Pokea consumed is in the form of satay Pokea (39%) and boiled Pokea (8%). The community manages Pokea meat by boiling 67%, processing it by frying 43%, sautéing 33% 8.
Research conducted by Rasyid, et al. on the chemical composition of Pokea meat in the Sampara area, Konawe Regency, Southeast Sulawesi obtained results from t-test analysis of the essential amino acids content of fresh and boiled Pokea meat; the only lysine was significantly different. The study also found non-essential amino acids, glutamic acid, serine, glycine, and cysteine, which differed significantly in composition in Pokea meat 9.
The total amount of amino acids in Pokea meat is relatively the same after boiling, while non-essential amino acids decreased significantly by 29.43%. In fresh meat and boiled Pokea identified as many as 25 types of fatty acids. The content of fatty acids in Pokea skin after boiling is relatively stable. Based on n6 / n3 and PUFA / SFA ratio, the ratio of fresh, boiled, and dry Pokea peels can be said to be healthy and safe for consumption. Identifying the extract is correct because it is proven to provide positive reaction results containing protein and carbohydrates 9.
Consumption of foods high in saturated fatty acids increases cholesterol levels in the blood and leads to atherosclerosis, affect the decrease in Nitric Oxide levels, leading to hypertension. Initially, LDL will be oxidized by superoxide produced by NAD (P) H macrophages oxidize. Ox-LDL stimulates several redox-sensitive processes that harm endothelial function. Through inhibition of eNOS activity and NO inactivation, ox-LDL may reduce NO bioavailability 10.
There was a difference between hypertension and non-hypertension groups in the variable level of oxide, where the non-hypertensive group was significantly higher than the hypertension group. This study's results are supported by previous research, which shows significant differences in respondent's Nitric Oxide levels in the Non-Hypertension and Hypertension groups with a value of p <α (p = 0.023). The mean value of Nitric Oxide levels in the Hypertension group was lower than Non-Hypertension 11. Similarly, studies also show that the mechanism of vascular endothelial dysfunction is associated with a decrease in plasma NO levels 6.
NO levels are synthesized by nitric oxide synthase (NOS) from L-arginine. After being synthesized, NO undergoes diffusion from endothelial cells into vascular smooth muscle cells and causes an increase in intracellular cyclic guanosine monophosphate (cGMP). This increase in cGMP will trigger the relaxation of vascular smooth muscle 12.
Nitric oxide (NO) is an Endothelial Derived Releasing Factor (EDRF) that acts as a vasodilator and lubricant to prevent the attachment of Low-Density Lipoprotein (LDL) and blood cells. Based on this study's results, in patients with hypertension, it was found that NO levels were lower compared to patients without hypertension.
These results are consistent with the theory that NO plays a role in regulating blood pressure and decreasing NO's availability as an essential factor during endothelial cell aging 13.