×
Go to content
INVESTIGATION / RESEARCH
Previous /Index / Next
Evaluation of Gene Variants in TGFB1, SERPINF1 and MEPE in a Spanish Family Affected by Otosclerosis and Tinnitus

Figure 1. Genealogy of the family subject of the study showing the segregation of OTSC and chronic subjective tinnitus. See legend for conditions. An asterisk in individual III:10 indicates that her tinnitus condition disappeared upon stapes surgery. Arrow, proband.

RESULTS
Pedigree analysis
The pedigree of this study (Figure 1) contains 73 individuals of a Spanish family, including seven confirmed cases of OTSC. Not all Generation IV subjects are depicted. Generation V has been omitted because either the immediate ascendants did not suffer HL or because they were too young to be included in the study. Table 1 summarizes relevant information from individuals of the family with confirmed OTSC.

The proband of the study (III:5, arrow in Fig. 1) was a 72-year old Spanish woman who was diagnosed with bilateral OTSC at the age of 20, three years before childbirth. She had (failed) stapes surgery in both ears. She was diagnosed also with osteoarthritis, and never took oral contraceptives. Her two youngest sons (IV:9 and IV:10) were diagnosed with unilateral OTSC and underwent a stapedectomy. Subject III:4 suffers from Paget's disease. The medical history of subject II:5 confirmed stapedectomy. That meant individual I:2 or his spouse must have been carriers of the mutation(s) that caused otosclerosis in some of their descendants.
It was found a high prevalence of chronic subjective tinnitus in the family. Hence, participants were asked to answer a detailed questionnaire on their tinnitus experience, as in Langguth et al. (2006) 38. The results of the survey are provided in Supplementary Table 2. As shown in Figure 1, all OTSC-affected members of the family suffered from chronic subjective tinnitus. Also, reports from the interviews indicate that the tinnitus experienced by OTSC-affected subjects was severe. Interestingly, tinnitus was also present in non-affected individuals II:9, III:6, III:16, III:29, III:30, III:32, IV:6, IV:8, and IV:13 of the family. The tinnitus in individual III:10 disappeared after corrective surgery.
Genotype analysis of TGFB1, SERPINF1, and MEPE
In the present study, the contribution of previously described mutations in the genes TGFB1, SERPINF1, and MEPE was analyzed. Genomic DNA samples of the core family of the proband were used because they comprise both confirmed OTSC cases and controls. We worked on the assumption that variations found on the core family of the proband would be representative of those affecting close relatives within the family.
TGFB1. The TGFB1 allele c.-509C has been associated with normal hearing and c.-509T with OTSC 24. In the present study, we decided to determine whether SNP c.-509C > T was present in individuals affected by OTSC using genomic DNA from the core family of the proband. As shown in Figure 2, there were no differences between the sequences of affected and unaffected individuals. All members of the family carry the c.-509C allele. To note, it is the Reference Sequence Gene that has a T in that position.

Figure 2. Genotypes of the core family of the proband for the geneTGFB1. Subjects III:5S and IV:8, unaffected; III:5 and IV:9, affected. Arrows indicate the sites of the variants found in earlier studies. Image is a screen capture of alignments performed in MEGA 37.

SERPINF1. In a recent study, Ziff et al. (2016) 25 described three variants in the 5' UTR of SERPINF1-012 (c.-202_-200 del  TCG, c.-161G > C and c.-1G > C), reportedly affecting the expression of the transcript in the otic capsule. In our work we PCR-amplified and Sanger-sequenced the region comprising those variants. Figure 3 shows that none of the variants are present in the OTSC-affected individuals of the core family of the proband.

Figure 3. Genotypes of the core family of the proband for the 5'UTR region of the gene SERPINF1, isoform 2. Subjects III:5S and IV:8, unaffected; III:5 and IV:9, affected. Arrows indicate the sites of the variants found in earlier studies. Individuals III:5S, IV:8 and IV:9 are heterozygous (C/T) for the position c.-202. Images are screen captures of alignments performed in MEGA 37.

MEPE. The most recent candidate in the literature to cause OTSC is MEPE 27. Variants of this gene were found first in a Turkish family affected by HCFP and HL and later in a larger pool of OTSC subjects. In the present study none of the family members have HCFP. In our work, we amplified exons 2-4 of MEPE and adjacent regions in seven different PCR reactions using the same primers as in Schrauwen et al. (2019) 27 and DNA from individuals of the core family of the proband to look for the published gene variants -c.199_202 del GAAA (M2); c.49_54+delinsCA (M3); c.184G > T (M4); c. 496 dup (M5); c.617del G (M6) and c.679dup (M7)- and also to look for new variants. As shown in Figure 4, none of the published gene variants nor any other polymorphism were found to affect exclusively OTSC subjects. 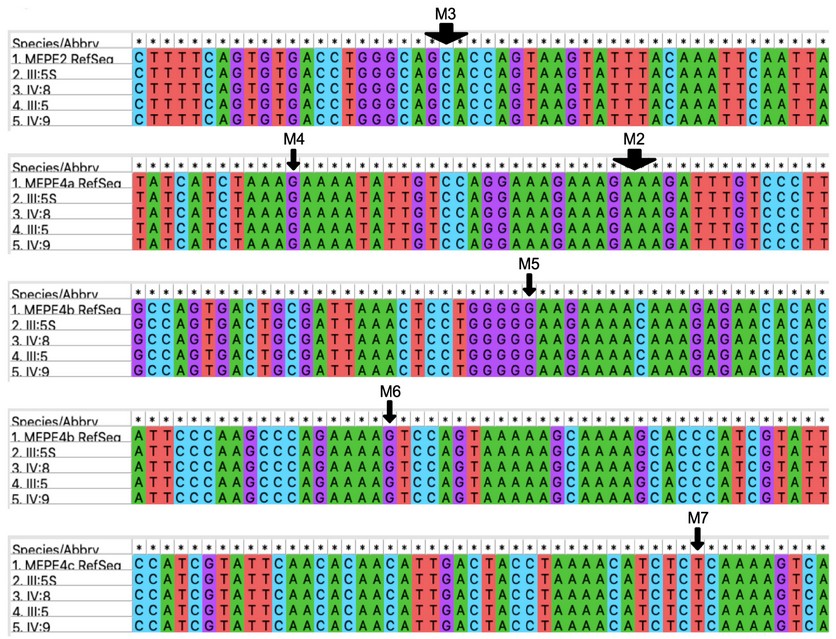 Figure 4. Genotypes of the core family of the proband for MEPE. Arrows indicate the sites of variants named M2-M7 as in Schrauwen (2018). Subjects III:5S and IV:8, unaffected; III:5 and IV:9, affected. Images are screen captures of alignments performed in MEGA 37.