Iman Mousa Khaleel 1*  ,Khalid Ibrahim Abd Alkhazraji2 ,
1,Department of Anatomy and Histology, College of Veterinary Medicine, University of Baghdad, Iraq
2Department of Anatomy and Histology, College of Veterinary Medicine, University of Diyala, Iraq
Corresponding author: [email protected],
Available from: http://dx.doi.org/10.21931/RB/2022.07.03.37
ABSTRACT
The present study aimed to describe and compare the histomorphological and histochemical structures to ventriculus in Goose(Anser anser) and Guinea fowls (Numidia meleagris). The work was carried out on twenty apparently clinically healthy birds obtained from a supplier in Baghdad city. They were allocated in two equal groups of each type of bird. The two groups were utilized for histological and histochemical investigations of their ventriculus organ. After anesthesia and killing birds, their abdominal cavity was dissected, their ventriculus was identified and proper specimens from its walls were prepared. The samples designated for histochemical staining were fixed in a solution of bruin's fixative, while the others for general histological examination were fixed in (10%) neutral buffered formalin. After processing, the sections were stained with (2.5 PH) Alcian- PAS combination, periodic acid Schiff, Masson Trichrome, and Hematoxylin and Eosin stains. This study elucidates that the microscopic construct of the ventriculus was similar for the two species.
The ventriculus consists of three tunicates (serosa, muscularis, and mucosa), whereas the submucosa is absent. The wall showed some significant differences in morphometric measurements. The mucosa of the ventriculus is coated with a thick layer of cuticles organized as a wavy clear pink line parallel to the mucosal surface and mucosal folds. The simple cuboidal-columnar epithelium covered the mucosa, which showed many folds. The proprial glands (simple tubular type) are lined by simple cuboidal epithelium, which opens into the crypts between the folds. A well-developed muscular comprised of smooth muscle fibers as two layers of inner circular and outer longitudinal. Serosa is composed of loose connective tissue coated by mesothelium. The Mean thickness of Cuticle, length of folds, mucosa and muscular in goose were significantly higher than that in guinea fowl; these differences may be due to variation in their diet. PAS and AB-PAS combined (2.5-PH) stains, cuticle layer, epithelium lining, and gastric glands showed a positive reaction with these stains. This study aimed to Study the normal histomorphological histochemical and structure of Gizzard in two avian species, local male guinea fowl (Numidia meleagris) and male geese (Anser anser). Also aimed to Comparative histomorphological, histomorphometric measurements and histochemical study of the Gizzard of two different local male avian species (Guinea fowl and geese).
Keywords: Histomorphological, Histochemical, Ventriculus, Guinea fowls, Geese
INTRODUCTION
Avian species have different adaptations for the digestive processing of their foods1. Several kinds of research were designed on habits of food and affecting activity and characteristics of morphology in avian digestion organs2. The digestive organs treat as machines that act for maintaining numerous activities; therefore, the differences in their functional capacities may affect their metabolic rates. Aves have high metabolic rates, which correspond with their requirement; thus, they must eat a large amount of diet 3. Generally, the stomach is considered the most active portion of the avian digestive system; it consists of two parts,  that are the proventriculus and ventriculus or Gizzard. The shape and size of these two parts of the avian stomach were varied and affected by the type of food. The proventriculus wall was- thin and glandular 4. The ventriculus contains grit, which facilitates beside muscle in grinding up the foods5. Birds were divided into three types according to their stomach type eating birds in which the ventriculus has mechanical action on a diet, such as a sparrow and a turkey, secondly the soft eating birds in which the ventriculus (Gizzard) as a stockist of food represented by owl and kestrel intermediate food eating birds as in hoopoe and geese in which the main function of ventriculus(Gizzard) was storage and physical digestion6.
MATERIALS AND METHODS
Birds
The current study was conducted on ten healthy male birds, guinea fowl and ten male goose obtained from a local Baghdad city supplier. This study was done in the laboratory of the Department of Anatomy and Histology, College of Veterinary Medicine,   University of Baghdad.
Histological Technique
Specimens from ventriculus tissue were taken from a different region, washed with normal saline and fixed in 10% buffered formalin saline. All samples were processed in a series concentration of ethanol alcohol procedure and section at 6-7µm. Some sections were stained routinely with hematoxylin and eosin to detect the construction of the studied tissue; others with special stain Masson's Trichrom for collagen and smooth muscle fibers. Periodic acid Schiff (PAS) Stain was used for mucopolysaccharides, while PAS-AB(PH 2.5) for neutral and acidic mucins7. The histological sections were photographed using a digital camera connected to a computer; sections were photographed at different adjustment power(3.7 x,4x,10x and 40x ).
Statistical Analysis
The Statistical Analysis System- SAS 8 program, Users Guide. (Statistical Version 9.1th ed SAS. (USA).
RESULTS
The microscopic observations of the ventriculus in male goose and guinea fowl generally were similar, which revealed that the ventricular wall in both species was comprised of tunica serosa, muscularis, submucosa not present and mucosa. The mucous membrane in the ventriculus was covered by a layer of thick Keratin-like secretion known (Cuticle) which was organized as a wavy clear pink line parallel to the mucosal surface and the mucosal folds (Fig.1) . Mean thickness of this layer was significantly higher in geese than in guinea fowls (Table1).

Figure 2. A:  Photomicrograph illustrates the Ventricular showed: Epithelium (E), fold (F), Cuticle(C),  A- X 40 H&E in Goose,  B- X 40  H&E Stain in Guinea f
The Propecia was filled by gastric or proprial glands (simple tubular glands), which opened into the crypts between the folds and arranged into two portions, the first were long, straight, and its contents were ejected, while the second one was short, oval-shaped and packed,  the proprial connective tissue observed extended into the core of the narrow fold (Fig.3,4), also the propria was wealthy by the collagenous fibers. The muscularis mucosa was present but interrupted in the ventriculus wall; the submucosal layer was absent (Fig. 5). 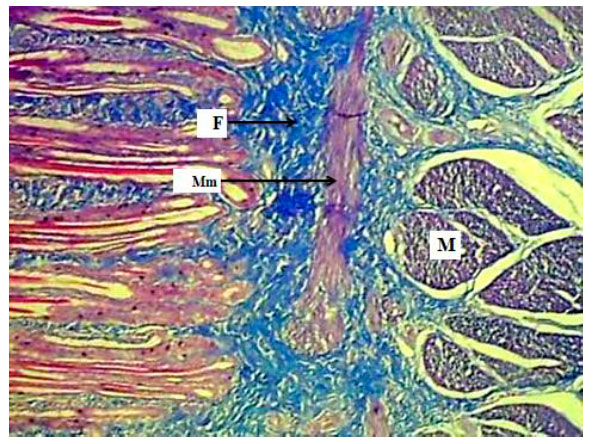 Figure 5. Photomicrograph illustrates the Ventriculas in Male Guinea Fowl showed: collagenous fibers of propria (F), Muscularis mucosa(mM), Muscularis(M) 10X Masson's Trichrome Stain.
A well-developed muscular layer in two studied birds which comprised of fibers of smooth muscles organized in thick inner circular and outer thin longitudinal layers and narrow lines of connective tissue observed between the smooth muscle fibers (Fig.6), The mean thickness of this layer was significantly higher in geese than in guinea fowls (Table1),   The serosal layer was formed by loose connective tissue covered by a mesothelium (Fig.7). The mean thickness of this layer was higher none significantly in guinea fowl than in geese (Table 1). 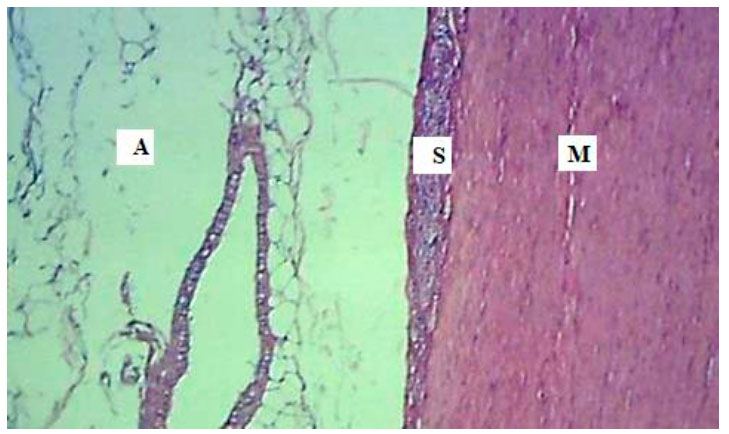 Figure 7. Photomicrograph illustrate the Ventriculas in Male Guinea Fowl showed:  Serosal layer ( S), Muscular layer (M),  Adipose tissue(A) 10X H&E  Stain.
Histochemical
The ventriculus surface epithelium was covered by a layer of Cuticle which gave a pinkish color due to a positive reaction to PAS stain(Fig.8,9). On applying the PAS stain, the secretory material within the lumina and the epithelial cells lining the folds of ventricles positively reacted toward PAS technique(Fig.9A), indicating the presence of neutral mucin. In combination with AB-PAS stain (2.5-PH), the Cuticle covering of ventricular mucosa gave rise to a positive reaction toward this technique (Fig10) due to finding the neutral to acid mucin. A similar response with the same technique (positively) was shown in gastric crypts and the cells of the epithelial lining of ventriculus which indicate to found of these types of mucin (acidic and neutral) (Fig.11,12). 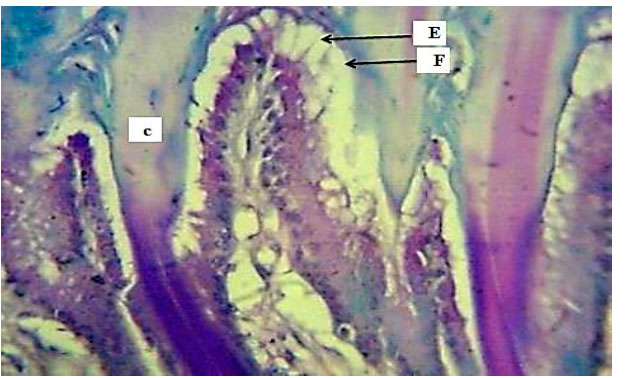 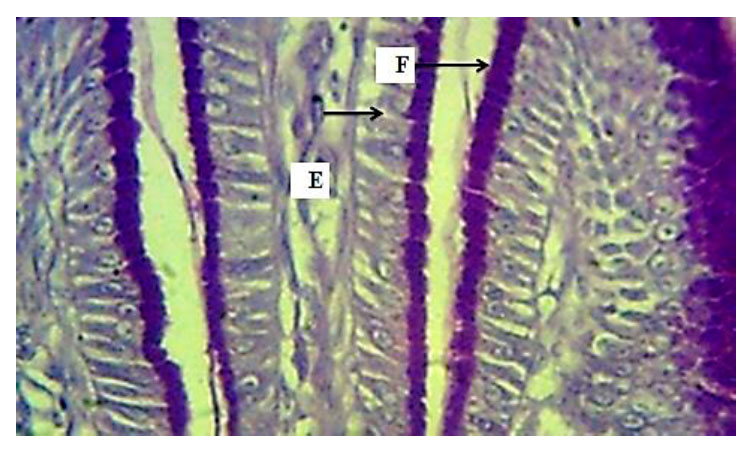 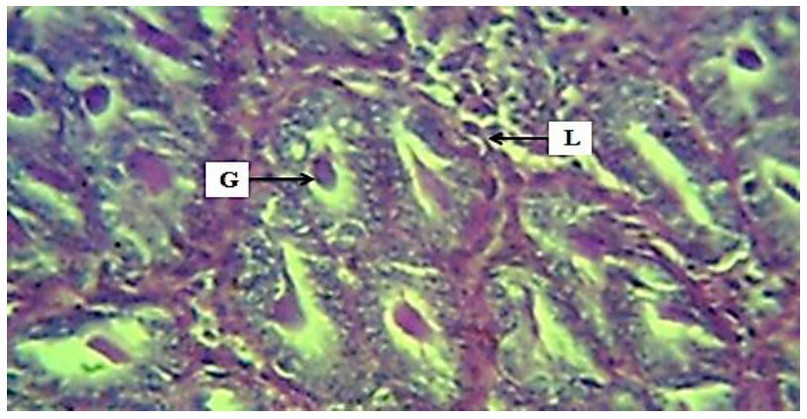