Figure 1. Formation of a zeolite, from the primary TO4 to secondary building units and further assemble to form extended zeolite13.
There is particular importance in the synthesis of the porous materials because of the specifications that they must present to be adequate and suitable for specific applications; therefore, the pore size, the porosity, the surface area, etc., must be controlled. Even in a more intricate way when the material is of nanometric scale. Engineering the design of porous material in clays is intended to change porosity, surface area14, surface content of solids, as well as thermal stability15.
Although the engineering process for the obtention of zeolites from layered silica clays has reached a high interest in the material sciences scenario, the research on three-dimensional structures (3D) from these compounds has been limited. This may be due to the limited application of pillared clay, so the effort to increase the use of coated material through pore engineering begins to transform the coating into a zeolite structure16. Now, data shows over two hundred types of zeolites based on a silica-alumina ratio17.
Clays
Clays are an extended collection of minerals, yet in chemistry, they are known as hydrous silicates18. They are found in nature from different natural sources and can be produced in their synthetic form. Their natural origin is after geological processes; whether they were physical or chemical processes, weather-depending processes, decompositions, etc., it will determine both the composition and properties of the clays. Even though they can travel because of natural phenomena, they are generally found near their origin site. Clay minerals may be divided into four major groups, mainly in terms of the layered structure variation, as shown in Table 1. These include the kaolinite group, the smectite group, the illite group, and the chlorite group19.

Table 1. Clay minerals classification19.
The arrangement in these crystals consists of silicate layers that coordinate two tetrahedral atoms combined to edge-shared octahedral sheets20. Thus, generally, clay structures are proposed in layers, and these layers are seen in sheets both tetrahedral and octahedral. This indicates that the tetrahedral layer is composed of silica-oxygen molecules sharing the corners to other tetrahedrons of the same type. Instead, the octahedral layer is structured by aluminum or magnesium in sixfold coordination, for instance, halloysite as seen in Figure 118,21, that displays this conformation in nature. The layers are then arranged by interactions such as van der Waals forces, hydrogen bonds, cationic or static forces, etc. Clay's ability for surface modification is what allows the dispersion of layered silicates into separate sheets20.

Figure 2. Chemical structure of halloysite21.
Clay particles can absorb or lose water in response to simple humidity content changes in the surrounding environment; when water is absorbed, it fills the spaces between the stacked silicate layers22.
Ecuadorian Clays
With regards to the soil mineralogy of Ecuador, there is barely any research done. Despite the large variety and existence of clays, there is still a significant lack of knowledge or information about their conformation, structure, and chemical formula.
Clays in Ecuador may have several compositions, yet they all show approximate levels of silica 60%, alumina 15%, low alkali and carbonates, and high levels of iron23. However, the lack of information opens the door to new research being done. There is a crescent interest in using clays for nanotechnology purposes, and most Ecuadorian lands provide them. As mentioned before, the clays may be found to be of various types, as shown in Table 1, even more than the few ones already discovered. And therefore, it can be used for many applications, including the development of nanomaterials and the improvement of nano-polymers.
In the same way, there is a need to discuss strategies and their implementation in nanoscale technology to take advantage of the naturally occurring resources, such as the Ecuadorian clays that can bring new and emerging materials, tackling ecological issues also industrial and economic concerns, etc. The lack of information on Ecuadorian clays is an opportunity to research them and discover and develop many other applications.
This review considered the data from the repositories of Ecuadorian Clays by the INEDITA project at Yachay Tech University, Ecuador. Under the INEDITA project, the clays were collected from Azuay, Zamora Chinchipe, and Morona Santiago provinces, located in the southeast of Ecuador, also known as the austral region of Ecuador. The total area of these provinces covers about 33000 km2, yet the samples were extracted from specific points, as shown below in Figure 3. 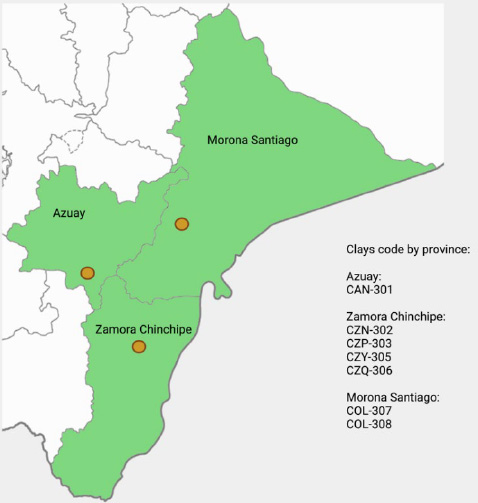 Figure 3. ap of the Ecuadorian provinces and sites where clays were collected. This sampling was performed by G.I.A.M.P (Research Group Applied in Materials and Processes).
They are labeled and enlisted in Table 2, considering the numbers used for classifying and identifying the clay series of the INEDITA-GIAMP project. The code corresponds to the origin site of the clay and the number of the sample in the set. Bouyoucos' method was used to collect the clays. Clay minerals were characterized via X-Ray Powder Diffraction. This technique is a non-destructive method that permits a collection of data about the composition of the crystallographic structure and, therefore, the physical behavior of materials24. The mentioned clays were previously used in nanocomposite research.
The physical appearance of each clay sample is shown below in Figures 4 and 5, which allow seeing how they vary in color. It could be related to the content of iron oxide or iron salts, not being this the only reason for the color variance in each of the samples, as can be observed. In Table 3 as well, it is indicated the iron concentration present in them. Still, the color of the samples will derive from other factors as the different mineralogical composition, environmental factors, organic compounds, etc. It must be said that the texture of the clays was very alike between all the samples. Between clays 301, 302, and 303 there is a notorious difference in color, while there is a similarity between 303 and 306 which were collected in the same province. It could be said that 302 and 308 also look alike, although 302 is more pinkish while 308 tends to a yellowish tone. 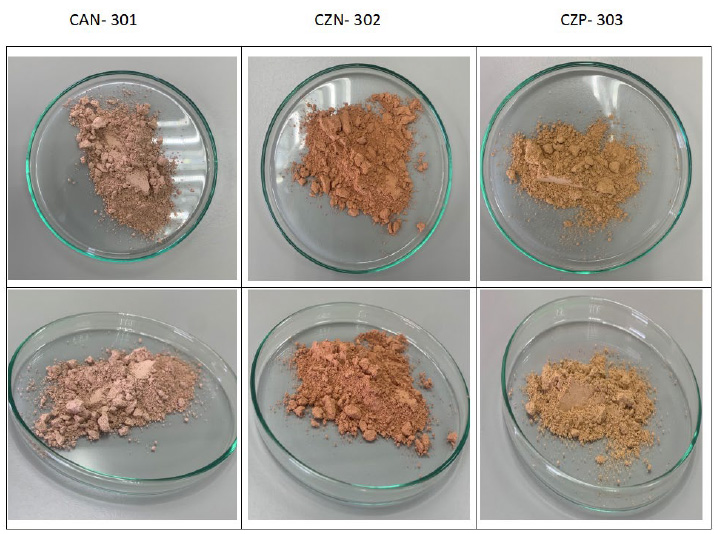 Figure 5. Samples corresponding to clays CZQ-306, COL-307 and COL-308
Over 2950 phases matching the XRD data were obtained and analyzed with the software SmartLab Studio II (Rigaku Corporation, Japan), on average for all the samples. It was necessary to see what compounds were present in the analyzed samples, from which it was observed that Quartz and other forms of silicon oxides appeared in all the samples in different compositions. As it is noticeable, the spectra show similarities for data sets that correspond to the exact location of provenience, and they also are alike in composition.
The most remarkable features obtained of the analyzed samples are shown in Table 2: 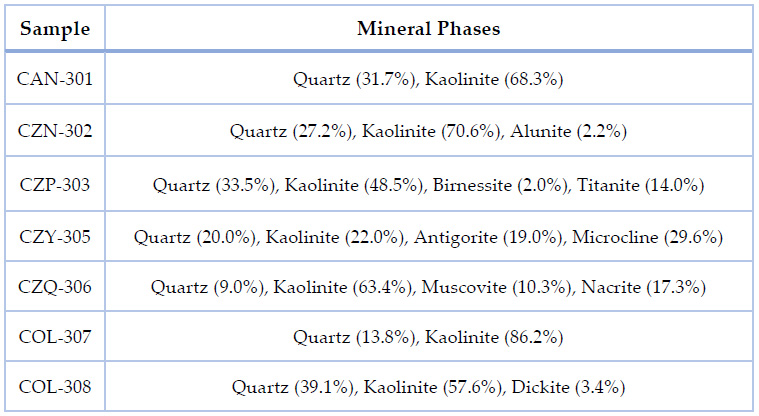 Table 2. Data corresponding to known mineral phases of each sample analyzed by XRD and treated via QUALX2.0, the values in parenthesis correspond to relative abundance (%).
Besides their mineralogical composition, the samples are also composed mainly of inorganic complexes, oxides, and long carbon chains. There is a high relative abundance of Quartz in all samples except for the CAN-306 sample, composed mainly of Kaolinite.
From the characterization of clays through Atomic Absorption Spectroscopy' AAS', during the INEDITA project activities, the iron concentration data (in parts per million) was obtained for each sample. This is shown in Table 3: 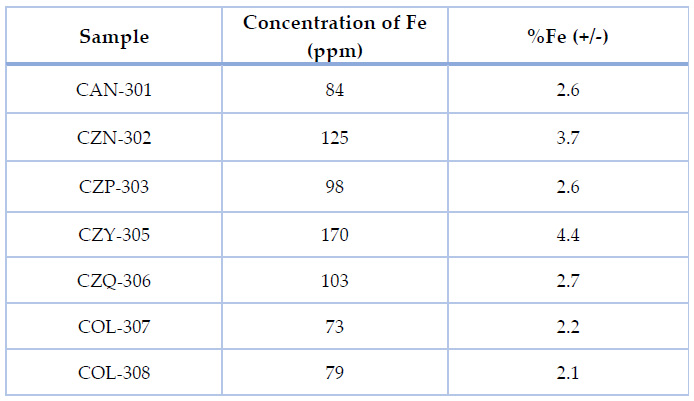 Table 3. Data corresponding to Iron (Fe) concentration and percentage present in each sample25.
The similar iron percentage in the analyzed clay samples indicates that almost all the clays share a similar element concentration. Moreover, sample CZY-305 shows a doubled concentration concerning the other clays, see Figure 6, which suggests that this sample is the most suitable precursor for porous framework synthesis designed for H2S capture. 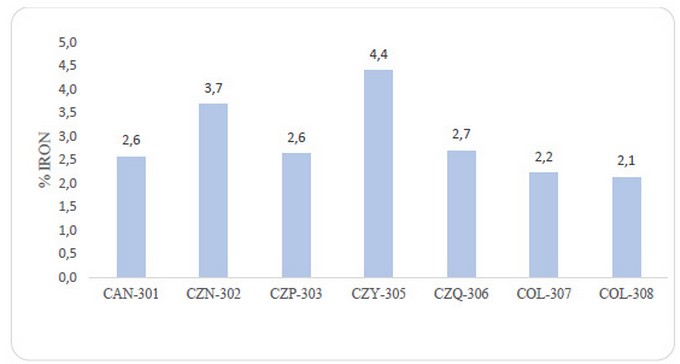 Figure 6. Percentage of iron concentration in clay samples obtained by Atomic Absorption Spectroscopy
Nanoclays
Nanomaterials, specifically nanoclays, permit and present various chemical formulas because of their modifiable structure7. For example, Kaolinite or Montmorillonite which chemical formula varies depending on the environment since its structure adapts to both water and soil18. Besides, materials like clays present characteristics such as the Cation Exchange Capacity (CEC), which allows the core of the material to create a charge imbalance that leads to a change in chemical composition. Additionally, it indicates the level of potential substitution in the core of the material, depending on which cations are used to fill the voids somewhat; thus, resulting in a promising new electronic or polymeric application. Thus, the exact theoretical formula is rarely presented in such a way in nature; rather, the material will have a certain number of waters, etc. 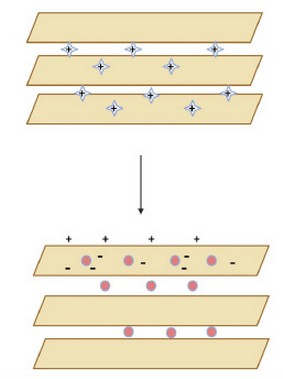 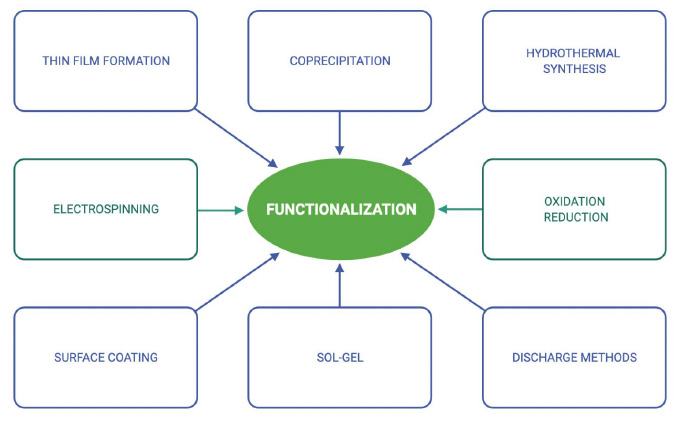 Figure 8. Common techniques used for synthesis and functionalization of nanomaterials33.
Clays and nanoclays had acquired particular interest for the applicability; they present for functionalization because of their large surface areas. Clays are characterized for their mechanical polymeric properties and one of those features is the large surface area; this remains after nano scaling them and this behavior makes them a special nanocomposite which more likely will present more necessary properties, such as favorable kinetics in adsorption terms, the desired pore size, and expected crystal arrangement, among others.
Nanoclays can provide the chance not only to be functionalized inherently but also to accept, or interact with templates, resulting in the formation of a functionalized bilayer
nanomaterial. When the template comes from a naturally occurring source, such as plants, it widens the sustainability in the process of fabricating a new material, responsibly made, which tackles several green chemistry principles, some of them being:
•          Prevent waste
•          Less hazardous synthesis
•          Design of benign chemicals
•          Use of renewable feedstocks
•          Reduce derivatives
•          Design for degradation
From: The Twelve Green Chemistry Principles34.
There are several studies in recent years corresponding to the research of functionalization of materials and their applications. This so-called functionalization takes advantage of a wide range of available resources, whether they are naturally occurring or synthetic. The branch of study they can apply is an open window to futuristic materials, devices, and medicine. An assorted list of articles is shown below om Table 4, which shows the research that has been done between 2020 and 2021 with functionalized materials. 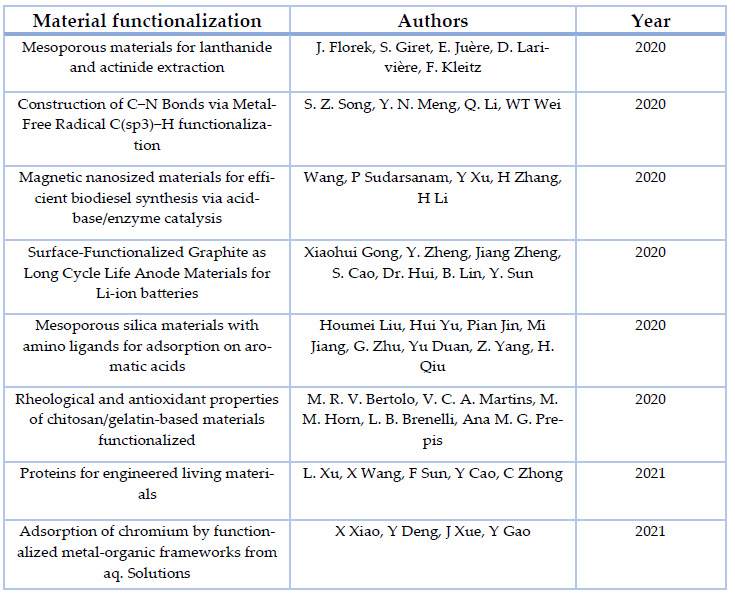 with Co as the initial concentration and Ct as the concentration different from the initial. Any Ct can be considered, yet is highly recommended to consider the final time to have a wider window of a full adsorption process. Under the same considerations, the above equation can also be used to study gas adsorption; however, many factors would change because gas molecules' behavior is much different from liquids.
Handling and treatment of nanoclays: suggestions on their toxicity
The nanoscale size of nanoclays allows them to play an innovative role in new biological and environmental functions. Yet, they can also become a significant problem since they also can interfere with cellular processes8. The complexity of nanoclays effects and behavior requires putting up very detailed and systematic handling and precautions to reduce the risks of exposure.
Despite the several useful biological and environmental applications of nanoclays, their nanoscale size enables them to penetrate the cell membranes and interfere with cellular processes. Given the complex and uncertain effects of nanoclays on biological environments, systemic management, analysis, and precautions are required to assess and minimize the exposures during their use, handling, and discarding.
More research advances in this specific topic are required to comprehend the dynamics and behavior of nanoclays in living environments and assess the possible damages and side effects caused by the toxicity of the mentioned molecules. It is of primary importance to achieve a safe production of nanocomposites and nanomaterials as they represent and play a fundamental role in the next significant generation of polymers and their application.
Nowadays, there is no clear nor solid explanation of the exact mechanism of how these molecules can be prevented to cause adverse effects on cells, yet the most researched motive seems to be its large and augmented surface area, which also is what gives such excellent properties they present also allowing the surface functionalization, becoming a double edge sword.
CONCLUSIONS