, Abeer Ali Marhoon2 and Rafed Abbas Kadhum3
1* Department of Biology, Al-Rasheed University College, Baghdad, Iraq;
2  Al-Rafidain University College, Baghdad, Iraq
3  Biology department Wasit University College of science. Iraq
*Corresponding Author:[email protected]
Available from: http://dx.doi.org/10.21931/RB/2022.07.01.31
ABSTRACT
This study aimed to detect genetic variants of the UGT1A1 gene in patients with Gilbert's syndrome. To detect this, primers were designed; PCR and direct sequencing were done for the promoter area of the gene as a diagnostic tool for the detection of any polymorphism. Variation and polymorphism were detected within the promoter mutants of the UDP glycosyltransferase _UGT1A1 gene that causes hyperbilirubinemia in a group of Iraqi patients compared with a group of the normal healthy individual as controls. The patients with hyperbilirubinemia in this study were 30 in which the total bilirubin level was more than 12 mg/dl serum; they included 25 males and 5 females, while the control group consisted of 20 healthy individuals. This study was carried out from September  2019 till April 2021. The result displayed high occurrence of Gilbert syndrome within male patients than in females, and regarding the analyses of mutation of bilirubin UDP glycosyltransferase _UGT1A1 gene, it is clear that the genotypic distribution of variation among the hyperbilirubinemia patients included all 30 patients, while SNP was detected in 18 patients out of 30 which indicate that the UGT1A1 gene mutation was a likely risk factor for the development of hyperbilirubinemia related Gilbert syndrome in Iraq. The homozygous and heterozygous polymorphisms A/G inside the promoter region of the UGT1A1 gene were effectively identified by sequencing. Our finding suggests that TA repeats and allele of UGT1A1 polymorphism A/G are associated with Gilbert's syndrome and act as genetic markers of this disease in Iraqi patients. To analyze data and sequence variation in gene, generous software was used after amplifying the gene. All processes include DNA extraction, PCR amplification, sequencing, and assembly.
Keywords. Gilbert's syndrome, UGT1A1 gene, polymorphism, hyperbilirubinemia
INTRODUCTION
Gilbert syndrome (GS) is a disorder conspicuous by intermittent unconjugated hyperbilirubinemia and jaundice1 Protein formed from the UGT1A1 gene, named the bilirubin uridine diphosphate glucuronosyltransferase (bilirubin-UGT) enzyme, is a hepatic enzyme in which glucuronidated bilirubin; a material formed once red blood cells are broken down. The enzyme's function changes the toxic form of bilirubin to its nontoxic form, making it capable of being thawed and detached from the body; this enzyme is required for the conversion (conjugation) and subsequent elimination of bilirubin from the body,2,3. Gilbert's syndrome is supposed in patients that have unconjugated hyperbilirubinemia produced by reduced activity of the UDP-glucuronosyltransferase 1A1 (UGT1A1) gene in the lack of irregular liver function and hemolysis, noticeable by unbalanced unconjugated hyperbilirubinemia, typically due to the polymorphism uridine diphosphate-glucuronosyltransferase inherited defects in uridine diphosphogluconurate glucuronosyl-transferase (UGT) that encoded by the UGT1A1 gene at chromosome 2q37.1, the reduced enzyme action are lead to hyperbilirubinemia. The variation in the UGT1A1 gene can reason for Gilbert syndrome that characterized by phases of insignificant unconjugated hyperbilirubinemia, 3 The main genetic variants in Gilbert's syndrome are TATA-box repeats of the promoter region that are responsible for the manufacturing of the bilirubin-UGT enzyme and exon 1 G211A of the coding region, UGT1A1 gene mutations either decrease the affinity of UGT1A1 toward bilirubin or decrease enzyme activity. New studies presented serum bilirubin is related to a genetic variation of the UGT1A1 locus 4. In several people, the maximum shared change cause Gilbert syndrome happens in part near the UGT1A1 gene called the promoter region. This alteration must happen in both copies of the UGT1A1 gene to cause Gilbert syndrome. 5, 6,7,8,9
Homozygous polymorphism is the most public UGT1A1 genotype responsible for Gilbert's syndrome when  A(TA)7 TAA in the gene's promoter region; this will make a 70-80% reduction in the gene's promoter region glucuronidation activity. In contrast, the change at nucleotide 211 (G211A), which change arginine to replace with glycine at position 71 in the coding region of the UGT1A1 gene, is accountable for around 20% of Gilbert's syndrome cases in Asian people10,11,12Therefore this study was aimed to detect the gene variation in UGT1A1 gene in blood samples as a diagnostic tool by PCR and sequencing in patients from Iraq and determine its susceptibility to with Gilbert's syndrome.
MATERIALS AND METHODS
This study was held from September 2019 to April  2021 at the University of Al-Rasheed  / Biology Department, and the molecular study was held in the molecular laboratory of ASCo. They were a learning center in Iraq. Blood samples were collected from a population consisting of 30 subjects with Gilbert syndrome disease who complained of high bilirubin level in blood and have familial history of Gilbert syndrome with no clinical features refer to a disorder of liver functions; they were selected from those attending private Hospital in Baghdad. The age of these patients ranged from 17 - 55 years, in which 25 patients were males, and only 5 were female. The control group involved 20 healthy individuals were their ages and sex thoroughly similar to the patients and had no history of any disease.
An aliquot of 5 ml blood sample was gained from the vein of patient and control groups and divided into two parts, the first part (2 ml) was collected into an EDTA tube and kept at -20 °C for molecular analyses while serum was used for biochemical tests for liver enzyme ALT, AST, alkaline phosphatase, was recovered from the second blood part (3 ml).
Biochemical analyses of liver enzymes ( ALT, AST, alkaline phosphatase ) were estimated. The levels of all enzymes were examined for both the experimental and control groups.
DNA extraction
First DNA was isolated according to the procedure ReliaPrep™ Blood gDNA Miniprep System, Promega as the   steps in manufacturer producer (table 1)

Table 2. sequences of primers used in the detection promoter region of UGT1A1 gene in this study
Polymerase Chain Reaction (PCR)
PCR was performed for 50 samples (30 patients and 20 control groups) using specific primers designed to amplify and sequence the promoter region of the UGT1A1 gene as described in table (2). PCR amplifications were performed as presented in (table 3) 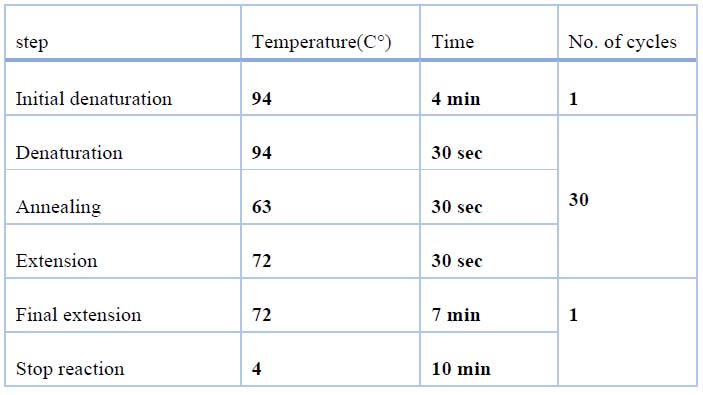 Table 3. PCR amplification program of UGT1A1 gene
DNA Standard Sequencing
To analyze the nucleotides sequences for all samples to determine the presence of single nucleotide polymorphism (SNP) and determine the genetic variation of this gene within the population, sequence analysis of the promoter area of the UGT1A1 gene was done accomplished on Gilbert syndrome patients. PCR product was directed for Sanger sequencing by ABI3730XL, automated DNA sequences, Macrogen Corporation – Korea. The obtained results were established through email and investigated by generous software.
RESULTS
Liver function test results of Gilbert syndrome patients
The patients with hyperbilirubinemia suffering from Gilbert syndrome in this study were 30 by a whole bilirubin level of more than 12 mg/dl, which comprise 25 patients were males and 5 patients were females, samples for patients and control groups have normal liver enzyme ALT, AST, alkaline phosphatase values.
Distribution of Cases According to Gender
the distribution of GS according to gender showed higher rates in males than females when the male cases were 83.33% and 16.66% for females.(figure 1) 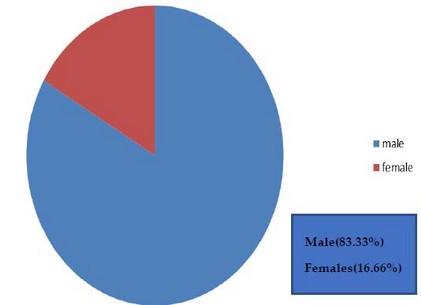 Figure 1. Distribution of Cases According to Gender
Purity and concentration of DNA extracted from
The DNA was effectively extracted from blood samples. The purity of DNA extracted from blood samples was extended from 1.8 to 2, and the concentration of DNA was extended from 70 -120 µg/ml.
Amplification of UGT1A1 gene
The molecular genetic markers related to patients with hyperbilirubinemia were examined, the segment of the UGT1A1 gene can be amplified by using the PCR, including the promoter region with a size of about 892bp shown in figure (2). The primers in this study were designed using the NCBI Primer-Design online tool to detect single nucleotide polymorphism (SNPs)that may be found in the target gene leading to hyperexpression bilirubin that leads to Gilbert syndrome. 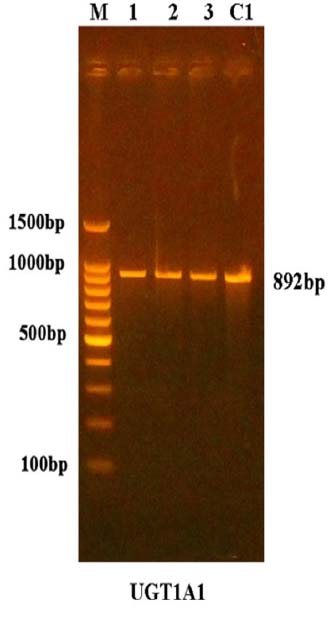 Figure 2. The amplification of UGT1A1 gene promoter region of patient M= 100bp ladder marker. Lanes 1-C1 is 892bp PCR products.
Sequencing and Analysis of UGT1A1 gene
An investigation of any genetic variation and mutations in the UGT1A1 gene was done. The sequence analysis result for the promoter region in the UGT1A1 gene showed there were two genetic variants within the gene's promoter area. The first variant was, 8 repeats of TA copies was observed in the sequence of the gene of all patients samples; the results were directly compared with the Iraqi healthy control group in which it's clear that 7 TA repeats were detected in this region as shown in table 4; also it is compared databases at www.ncbi.nlm.nih.gov by the BLAST check-up tool and besides using Genus software program figure (3 –a,b). Also, there is the second variant in the promoter region of UGT1A1 region of the gene was detected in which among the thirty  Gilbert Syndrome  patients, there are one SNP detected  in the promoter region, which is A substitution  with G in site -208, as shown in table 4, and the number of patients who had this polymorphism (A instead of G) was 18 out of 30 patients  (60 %) in comparison with that of healthy individuals included in this study, while the other 12 patients (40%) no variation appeared in this studied part of the gene, might have in another coding region of UGT1A1 gene, as shown in figure (4-a,b) 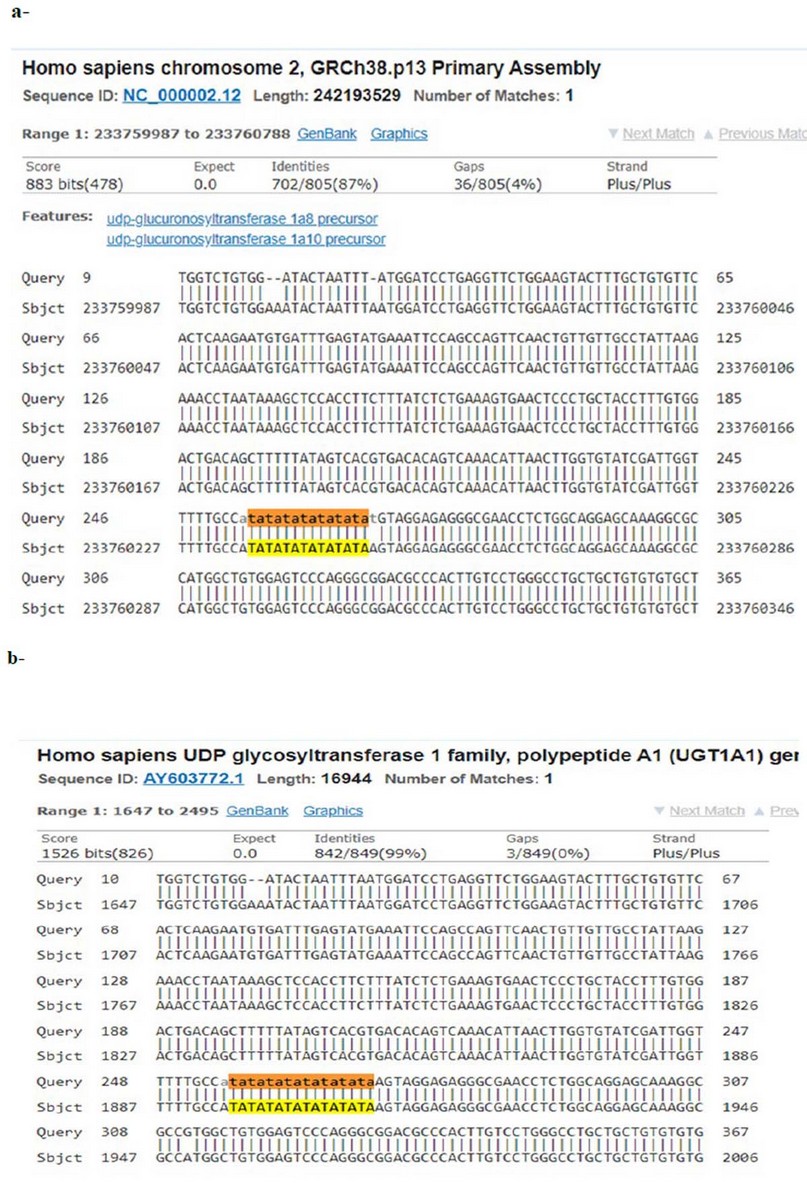 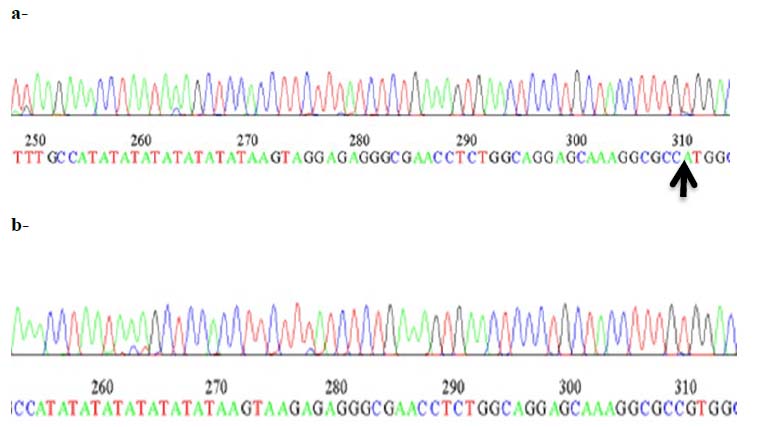 Figure 4-. a,b Nucleotide sequencing profile of promoter region in UGT1A1 gene polymorphism at position -208 as recorded by ABI3730XL, automated DNA sequences.
The outcomes of PCR analysis of UGT1A1 (-208 A/G) polymorphism subdivided GS patients into three genotypes groups: the first group is homozygous wild type (AA) in which no variation appeared when they have two identical alleles for a gene, the second group is homozygous mutant (GG), and the third group is heterozygous (AG) having two different alleles for a gene one dominant and one recessive, this is a heterozygous mutation, As a result of this observation, AG genotype may be considered as a risk factor, while GG genotype appeared only in 8 patients out of 30 patients (26.6%) when they harbored two AA/GG variations and cannot be considered as a protective factor for Gilbert syndrome in the Iraqi population examined. This observation indicated that these genotypes are associated with Gilbert's genetic predisposition. The percentage of genetic variation of the prompter region of UGT1A1 (-208 A/G) was illustrated in Table 5.