Sabreen Hamodi Hamza1*, Zainab Fadhel Ashoor 2 and Abbas Mahdi Rahmah 3
1  Department Of Microbiology College Of Medicine Mustansiriyah University,
2 Department Of Microbiology College Of Medicine Mustansiriyah University, [email protected]
3Nantional Diabetes Center (NDC) /Mustansiriyah University; [email protected] gmail.com
*  Correspondence: [email protected];
Available from: http://dx.doi.org/10.21931/RB/2022.07.01.25
ABSTRACT
Back ground: Acromegaly is a rare endocrine disease; its incidence is 4-6 million per year, while its prevalence is 40-60 million per year. They are separating acromegaly from gigantism that occurs before growth plates are closed. Neopterin is a systemic adaptive immune activation biomarker produced upon interferon-gamma (IFN-γ) stimulation by monocyte-derived macrophages and dendritic cells. Eighty acromegalic patients (50% diabetic acromegalic and 50% nondiabetic acromegalic) and forty healthy control groups were enrolled in the study to find out the level of Neopterin and insulin-like growth factor-1 in the sera of the study population; the results showed both molecules (neopterin and Insulin-like growth factor-1 were found to be high in acromegalic subjects when there is concomitant diabetes, and insulin-like growth factor-1 correlates positively with total cholesterol and neopterin. At the same time, neopterin correlates positively with HbA1c. This study was aimed to find out the difference in neopterin level in diabetic acromegalic versus n0n-diabetic acromegalic patients;
Eighty acromegalic subjects were enrolled in across sectional study by measuring the neopterin level in the sera of diabetics and nondiabetics as 39 have diabetes while the remaining 41 patients are nondiabetic. Neopterin is high among diabetic acromegalic patients when compared with nondiabetic acromegalic subjects. Insulin-like growth factor-1 correlates positively with neopterin and total cholesterol; (4) Conclusions: Across sectional-study enrolling eighty acromegalic patients registered in the National Diabetes Center. Thus they were subdivided into two groups: - diabetic and nondiabetic the level of neopterin was found to be among diabetic versus nondiabetics.
Keywords. Neopterin; Diabetic Mellitus; Acromegaly
INTRODUCTION
Acromegaly is a chronic and rare condition caused by pituitary adenoma, resulting in increased growth hormone secretion. High growth hormone concentrations induce the liver to secrete insulin-like growth factor-1(IGF-1), resulting in unacceptable changes in the patient’s form and changes in the body, as well as skeletal anomalies1. Acromegaly’s hallmark characteristics include hand and foot enlargement, prominent supraorbital ridges, hyperhidrosis, seborrhea, and related comorbidities such as diabetes mellitus, elevated blood pressure, heart failure, and osteoarthritis 2. Growth hormones are involved in inhibiting the function of insulin, like inhibiting the phosphorylation of insulin receptors, among the most significant aspects of insulin production. As a result, the insulin sensitivity of the cells will decrease, encouraging peripheral glucose absorption in the periphery and increasing resistance to the gluconeogenesis suppression ability of insulin. Hence, the increase in growth hormone production leads to free fatty acids and avoids insulin-induced glucose oxidation, resulting in further deterioration of insulin resistance, contributing to diabetes mellitus 3.
Impaired glucose metabolism is typical in acromegaly patients, owing to impaired insulin sensitivity caused by high GH and IGF-1. Diabetes mellitus (DM) is one of the most common comorbid disorders linked to an elevated risk of cardiovascular death in people with acromegaly 4-5. (NEOP) is253D pteridine molecular weight compound pyrazine pyrimidine molecular weight compound pyrazine-pyrimidine molecular weight compound pyrazine-pyrimidine molecular weight compound pyrazine-pyram Pteridine is a chemical compound made up of pyrimidine and pyrazine rings. A pteridine is a class of heterocyclic compounds that can have a variety of substituents in their structure.
Pterins and flavins are a type of pteridine that has critical biological features. It is produced when T lymphocytes are activated by guanosine triphosphate (GTP) and -interferon (INF-) 6. When monocyte-derived macrophages and dendritic cells are stimulated to create interferon-gamma (IFN-), neopterin is produced, and it is regarded as a suitable proxy for measuring the rate of IFN- production.7-8-9-10. Neopterin concentrations increase with the dose of interferon, thereby helping to control the activity of inducible inflammation of INF-γ. Therefore, the measurement of neopterin levels in body fluids provides information on the activation of systemic adaptive immune activation derived from T-helper cells11.
MATERIALS AND METHODS
Eighty acromegalic patients (thirty- nine(39) diabetic acromegalic and forty-one (41) nondiabetic acromegalic patients attending the National Diabetes Center (NDC)/Mustansyriah University were enrolled in the study and compared with40 control subjects that were defined by achieving the goals (pituitary adenoma, size regression, Insulin-like growth factor-1 and growth hormone decrement down to the recommended, predefined targets)12. They were subdivided into subgroups according to their age, gender,  lipid profile, concomitant diabetes and glycemic control in diabetic patients. Neopterin was measured using enzyme-linked immune-sorbent assay(ELISA), which is done utilizing Human Neopterin (NEOP)ELISA kit was sandwich methodology. The Micro ELISA plate provided in this kit has been pre-coated with an antibody specific to NEOP. Correlation between NEOP and other biochemical and clinical variables was studied using Pearson correlation methodology. Statistical package of social science (SPSS) _ version 27 was used to analyze the data.
RESULTS
Eighty acromegalic patients were recruited, thirty-nine (39) are diabetics, and the other forty-one (41) are nondiabetics, while the control group includes forty (40) nondiabetic non-acromegalic healthy persons. All the recruited patients are registered in the National Diabetes Center (NDC)/ Mustansyriah University. The results of age and gender were presented in Table (1). The age was ranged from 25-78 years, and the more percentage of diabetic acromegalic patients was shown within the age group (40-49years) As they represent (46.2%) of patients. Neopterin levels are highest in diabetic acromegalic patients under 50, followed by nondiabetic acromegalic patients, and finally, the control group. Neopterin levels are higher in male diabetic acromegalic patients than in nondiabetic acromegalic patients, while the opposite is true in the control group, but this steady decline is not statistically significant. The usual range of serum neopterin is (3-100). Neopterin is high among diabetic acromegalic patients, followed by nondiabetic acromegalic patients and, finally, the control group. As revealed in table (2). 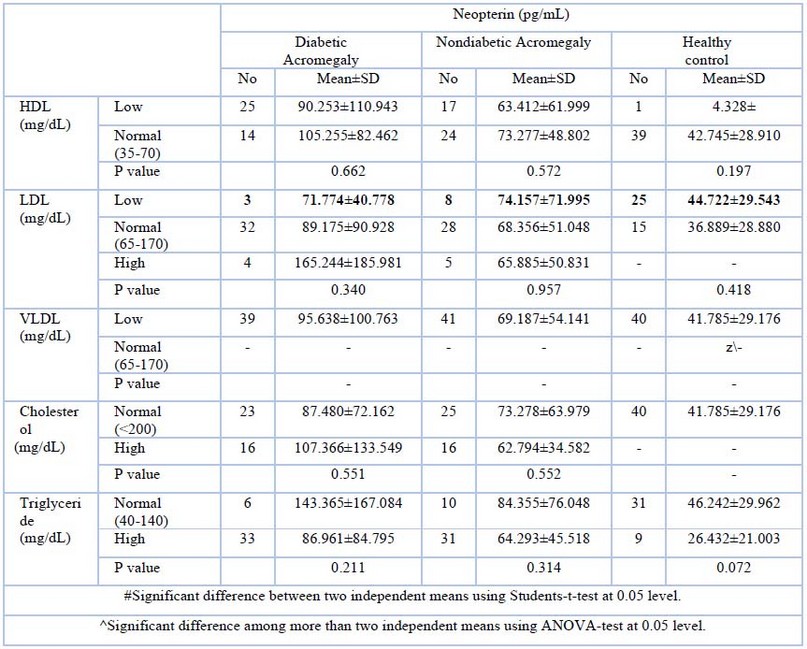 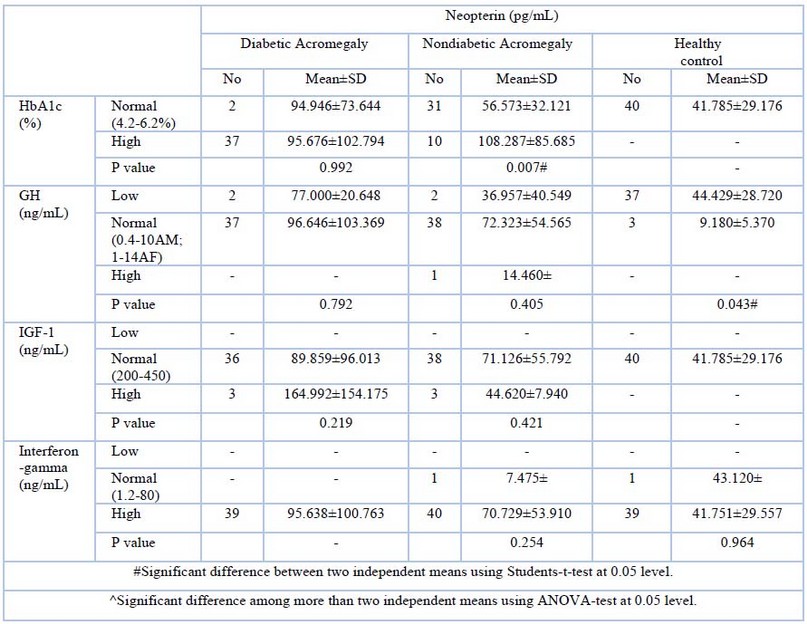