We assessed the size variation of morphological traits in Bosmina freyi regarding changes in environmental variables, the biomass of invertebrate predators, and algal food availability in two depths of the photic zone, the riverine zone, and near the dam zone (lacustrine zone) in The Riogrande II reservoir. In 200 individuals of B. freyi, using the software TpsDig2 we measured the body size, mucron and antennule lengths, and the antennule aperture percentage. Using the Mann-Whitney U test, we assessed the differences between these traits considering the zones and the photic depths; however, we used a canonical discriminant analysis with morphologic traits and environmental variables. Measured morphological traits showed a heterogeneous distribution between sampled zones and depths (p < 0.05). The highest values mucron and antennule lengths and the smallest antennule aperture angle were observed on small body size individuals, associated with physical, chemical, and biological characteristics in the riverine zone and the subsurface. Size structure distribution in B. freyi was related to changes in water temperature, trophic state, depredation, availability, and quality of food, of which implications related to the zooplankton community structure, predator-prey relations, and energy flow in the reservoir.
Keywords: Cladocera, predation, size structure, trophic state.
INTRODUCTION

Cladocera is a zooplankton assemblage that occupies an intermediate position in the aquatic food chain 1 because they ingest protozoa 2, algae, bacteria, and detritus lentic systems, and simultaneously they constitute one of the chosen prey for invertebrates and vertebrates 3.
Some species of this group have a wide variation in size structure due to genetic factors 4 and environmental factors as temperature 5, food availability 6, pH 7, and acidification1.
Bosmina genera is a group of small cladoceran filter feeders 8 with variations in body size, shape, and length of antennules and mucron 1,5,9.
According to Masson S (2004) 10 in Canadian lakes, increasing chlorophyll-a concentrations favors small individuals' predominance. Other authors detail that some changes in Bosmina size are because the predation pressure by Copepoda, Rotifera 11, 12 and macroinvertebrates of Chaoborus genera 1, 8, 9, 13. 4 indicate that predation by invertebrates induces an increase of size and the development of defense structures as the elongation of mucron and antennules in Bosmina.
Bosmina freyi14 contributes more than 60% of the total zooplankton biomass in The Riogrande II reservoir 15 due to its broad trophic plasticity 16 and resistance to high turbidity conditions17. This species was reported for the first time in 2004 in South-America 18, for Colombia in 2010 (Elmoor-Loureiro, com.pers.), and consequently, there is a lack of information about the structure of morphological traits.
We hypothesized that if the size distribution of morphological traits of Bosmina freyi in the vertical and longitudinal axis in The Riogrande II reservoir changes concerning environmental variables and the presence of invertebrate predators, so in the reservoir zone with the highest trophic state and warmer water, individuals of small size will dominate and in zones with high invertebrate predators biomass, individuals will have a mucron and antennule with a longer length and an antennule closed-angle.

METHODS
The Riogrande II reservoir is located in the northeastern of Colombia in The Río Grande II basin at 2200 m.a.s.l (6º 33' 50"- 6º 28' 07" N and 75º 32' 30"- 75º 26' 10" O). Has a total volume up to landfill level (2270 m.a.s.l) of 240 million of m3 and an average area of 1214 ha. This waterbody receives water from the Grande and Chico rivers and the Las Ánimas creek 19. This system is mainly used for hydroelectric generation and potable water supply 20. The Riogrande II reservoir has higher turbidity and a greater degree of eutrophication at riverine zones, mainly in the Chico River zone, due to sediment washing process in the basin and the domestic, industrial, agricultural, and livestock wastewater discharge from the closer cities (Entrerríos and San Pedro de los Milagros) located in the two principal rivers 21.
This research was conducted as part of the “Estudio de la problemática ambiental de tres embalses de Empresas Públicas de Medellín para la gestión integral y adecuada del recurso hídrico”, we carried out five sampled areas in The Riogrande II reservoir, in the subsurface and the photic zone edge (Figure 1) in September 2011. The highest dominance of Bosmina freyi happened in this period 15. 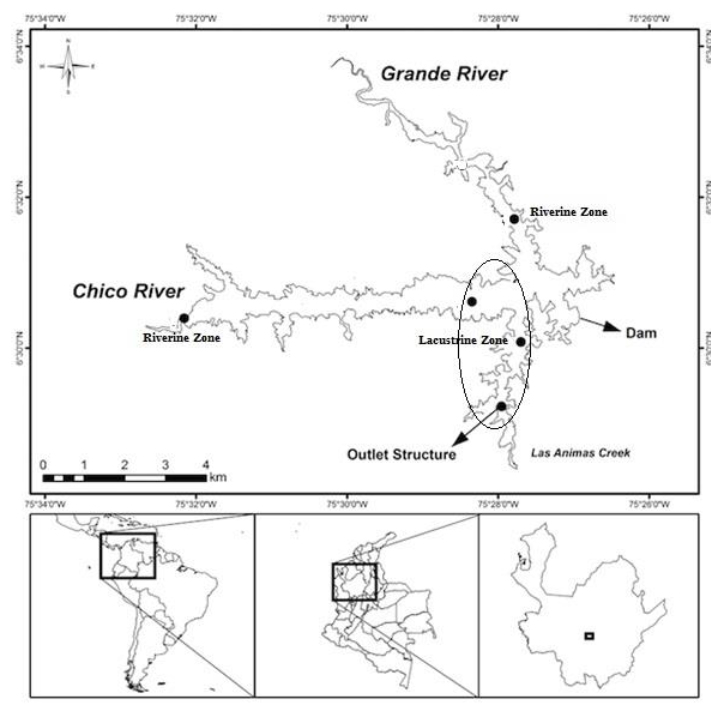 Figure 1. Study area and location of sampling stations
Physical, chemical and biologic variables data information (chlorophyll-a and plankton biomass) were took from the “Estudio de la problemática ambiental de tres embalses de Empresas Públicas de Medellín para la gestión integral y adecuada del recurso hídrico” 15, 22, 23, 24.
Methods for zooplankton sample collection and the estimation of Carlson index of trophic state (TSI) modified by 25 are described in 14.
We took 20 specimens of B. freyi (n = 200 individuals), and we used a photographic camera adapted to an optical microscope and were individually photographed to determine morphological traits using TpsDig2 (Figure 2). Lengths were measured in µm and the antennule angle in the opening percentage, assuming that a right angle (90°) has an aperture of 100%. 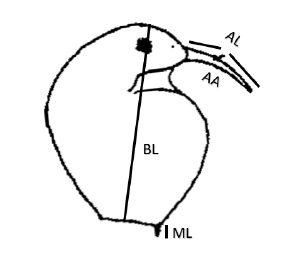 Figure 2. Body length (BL), mucron length (ML), antennule total length (AL) and antennule angle (AA) of Bosmina freyi (Modified from 5)
Data analysis
We used a Mann–Whitney U test because data did not fulfill the normality of residuals and homogeneity of variances. The last is to assess the significance of the differences between individuals' morphological traits from the zones and depths.
We also made a Generalized Discriminant Analysis using the measured morphological traits and the environmental variables. We calculated the scores and canonical vectors for graphic representation of the essential canonical discriminant functions in terms of explained variance, allowing a simple interpretation in the canonical space of differentiation among morphological traits of B. freyi and the environmental matrix 26. Data analyses were made using R Wizard V 2.3 Software 27.
RESULTS
The riverine zone had the highest temperature degree, greater eutrophication, and higher phytoplankton biomass (chlorophyll-a), rotifers (Asplanchna girodi De Geurne, 1888), and copepods predators (Mesocyclops longisetus Thiébaud, 1912; Metacyclops leptopus Kiefer, 1927; and M. mendocinus Wierzejski, 1892) biomass. Meanwhile, the lacustrine zone recorded the highest transparency, dissolved oxygen concentration, and Cryptomonas sp. biomass (Table 1).
B. freyi body length varied over the range of 202.64 and 457.02 µm (average = 294.7 µm), mucron length between 14.87 and 29.94 µm (average = 22.47 µm), antennule length between 94.21 and 170.25 µm (average = 134.11 µm) and the antennule opening angle ranged between 72.48 and 88.21% (average = 81.05%).
According to the Mann-Whitney U test, mucron and antennule lengths and the opening angle were significantly different among sampling zones and depths (Figure 3, a & b). Meanwhile, body length was significantly different among depths; it exhibited a significantly higher value in the specimens from the photic zone boundary (Figure 3 b). While mucron and antennule lengths were higher in individuals from the riverine zone and the subsurface concerning those from the lacustrine zone and the photic zone boundary, antennule aperture showed an opposite behavior. 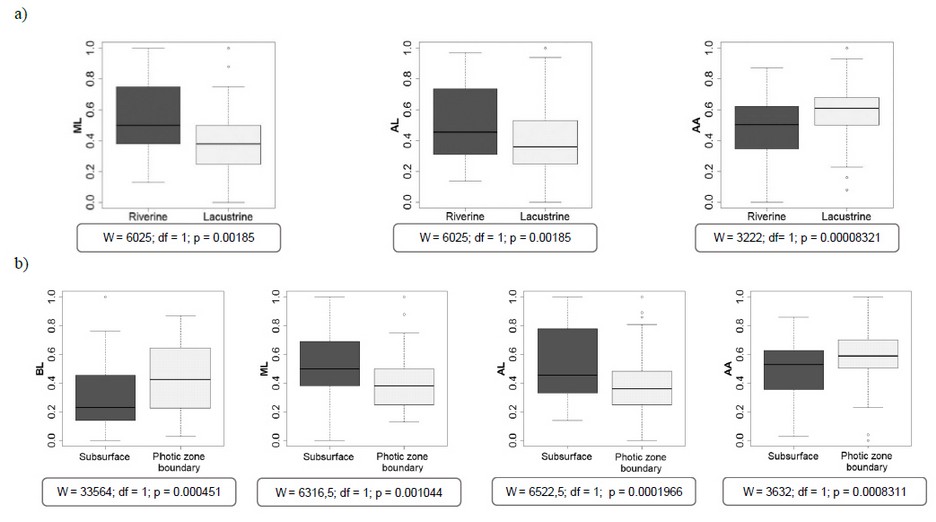 Figure 3. Morphological traits distribution BL, ML, AL, and AA into two zones (a) and depths (b) in the photic zone of The Riogrande II reservoir, September 2011. 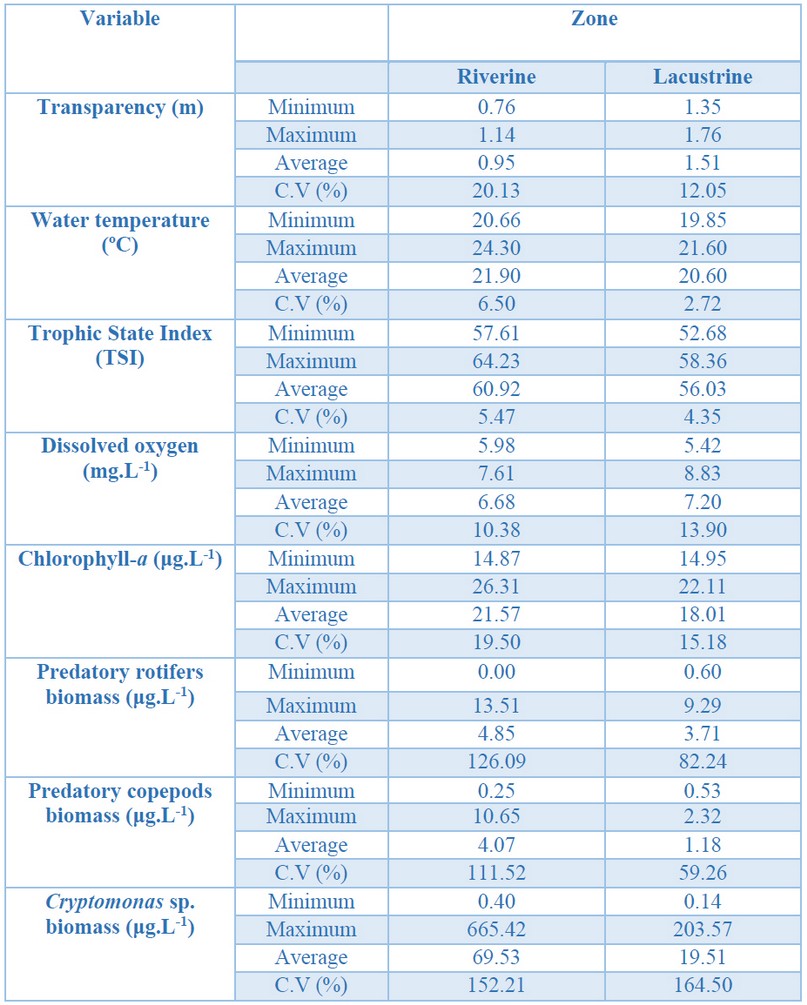 Table 1. Physical, chemical, and biological variables in The Riogrande II reservoir's photic zone, September 2011. C.V (%) = Coefficient of Variation.
A variance of 100% explains canonical discriminant analysis among zones and depths in the first axis. In both cases, classification and cross-validation values were 100%, clearly discriminating between riverine zones and lacustrine zone, as well as the subsurface and the photic zone boundary.
While individuals of B. freyi with higher mucron and antennule lengths are related with the riverine zone (warmer waters, as well as a greater degree of eutrophication and higher phytoplankton and predatory copepods biomass), in the lacustrine zone (more oxygenated and clear waters), specimens showed a tendency to present higher body size and an antennule more separated from the body (Figure 4 a & 5).
Depths were discriminated mainly by the presence of individuals with a higher mucron and antennule lengths in the subsurface, related to a higher temperature and greater dissolved oxygen availability. By contrast, individuals with higher body size and antennule aperture were mainly associated with the photic zone boundary, with higher predatory copepods and rotifers biomass, as well as phytoplankton and Cryptomonas sp. biomass (Figure 4 b & 5). 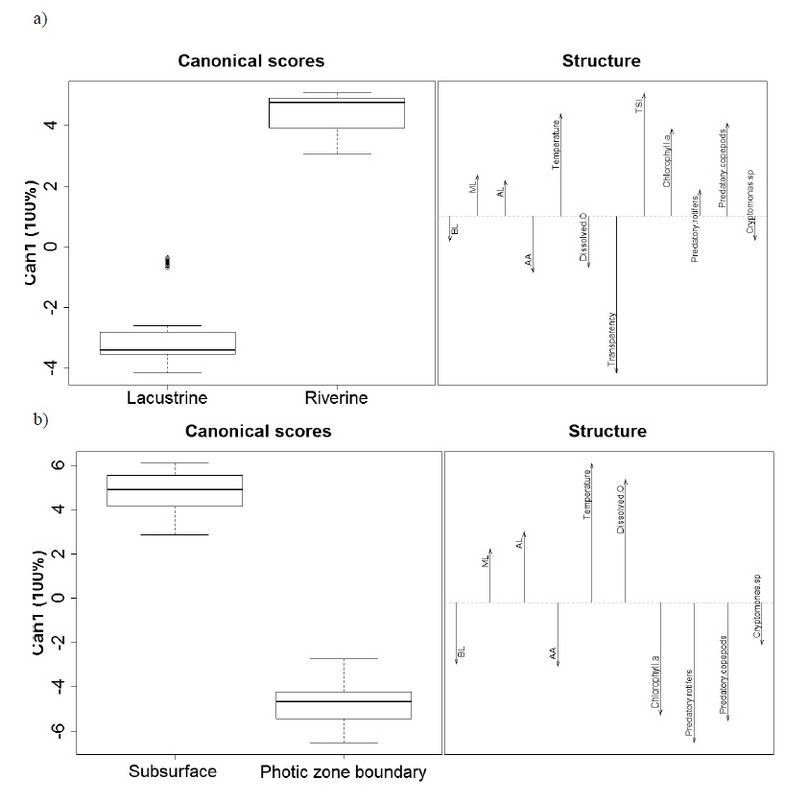 Figure 4. Canonical Discriminant Analysis applied to B. freyi morphological traits, environmental variables and phytoplankton, and zooplankton biomass. Linear regression model for zones (a) and depths (b) in the photic zone of The Riogrande II reservoir, September 2011. 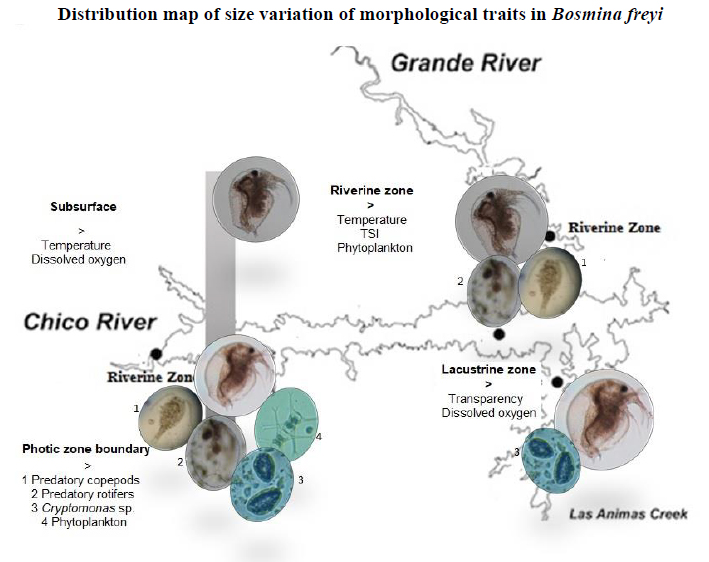 DISCUSSION
Melão, M. G. (1999)28 mentioned that temperature increase is a factor that directly affect organism's life cycle and population attributes, causing a time decrease in the organism's growth and an increase in population growth rates, which favors large populations with small size individuals 29, such as we observed in this study in the riverine zone and in the reservoir subsurface, where occurred the highest number of individuals with youth traits and higher mucron and antennule lengths 30.
Higher values of Carlson Index (TSI) and chlorophyll-a concentration in the riverine zone also favor small individuals due to a continuous energy source to maintain high metabolic rates 31. So, B. freyi population size structure in the reservoir seems to behave similarly to the general pattern of cladoceran size structure, in which smaller species are correlated to conditions of a more significant trophic state 32.
It has been reported that biotic variables have an indirect influence on mucron and antennule sizes and a direct effect on spatial and temporal population's dynamic, affecting the presence of predators and establishing food restrictions 33. This situation implies changes in size structure and the lengths of species attributes 1, as evidenced by this study.
The highest biomass of predatory copepods and rotifers in the riverine zone matched with has been reported in some studies about the influence of predation by invertebrates on morphological traits of Bosmina genera 9, 34, 35. Significantly 36, claim that copepods can consume Bosminidae species with sizes less than 400 µm. Nevertheless, the highest mucron and antennule size could reduce predation rates of small individuals of B. freyi by copepods, as it happens with other cladoceran species 37.
Antennule aperture may also be a defense mechanism against predators, and it depends on the predator attack mechanism. Some authors such as 38, 39 consider that a curved antennule (lower aperture) as that of the individuals detected in the riverine zone, protects the ventral part of cladocerans from some predators of genus Mesocyclops and especially from Asplanchna girodi, a rotifer species that dominated the biomass of rotifers in The Riogrande II reservoir during the study made by 15.
The highest biomass of the smaller organisms of B. freyi, of the predatory copepods and rotifers, may also be due to the highest primary production in the riverine zone 40 because the highest availability of resources may determine its presence in the longitudinal axis of the reservoir through the tributaries, especially the Chico River 39.
In the vertical axis, the size distribution of B. freyi structures could be attributed to vertical migration, common in the zooplanktonic community, particularly in Bosmina genera 41. In The Riogrande II reservoir 15 found a gradient in the vertical distribution of the zooplankton biomass. While smaller species seem to prefer superficial layers of the reservoir, the largest ones tend to be located in the deepest layers of the photic zone, probably as a strategy to avoid predation and selective removal of bigger species subsurface. This could resemble the vertical distribution of sizes in B. freyi population in which the individuals of larger size and smaller antennule and mucron length were mainly concentrated in the deepest layer of the photic zone.
Predatory copepods and rotifers agglomerated in this layer, and probably, as the individuals of B. freyi with a larger size (higher than 400 µm), they avoid predation/or are selectively removed from the subsurface 15.
The highest abundance of more significant individuals and smaller mucron and antennule lengths tended to coincide with the increase of Cryptomonas sp biomass in the zone near the dam (lacustrine zone), the photic zone boundary. The last implies that maybe these genera of algae constitute an essential resource for adults of B. freyi 30 in the reservoir 24 said that nanoplanktonic and mixotrophic species of Cryptophyta are a persistent component of zooplankton diet from The Riogrande II reservoir; apparently, it favors its growth and reproduction rates because it provides enough organic carbon, nitrates, and phosphates. Furthermore, it is very feasible that B. freyi complements its diet with detritus 42 and that alimentary strategy becomes more critical on small individuals of B. freyi together with the dissolved substances and organisms of picoplankton ingestion (< 2 µm).