Salim Hussein Hassan 1,*,  Jaafar Khalaf Ali 2
1 Department of Community Health, Karbala Technical Institute, Al-Furat Al-Awsat Technical University, Iraq, [email protected]
2 Department of Community Health, Karbala Technical Institute, Al-Furat Al-Awsat Technical University, Iraq, [email protected]
*   Correspondence: [email protected] ; Tel.: (009647702638133)
Available from: http://dx.doi.org/10.21931/RB/2022.07.02.26
ABSTRACT
This study aims to assess the quality of drinking water in Karbala. Furthermore, the quality of tap and bottled water are compared in this study. Materials and method: Physical, chemical, and bacteriological parameters were all measured in the study. The bacteriological test includes a total count of coliform and fecal coliform, which may be detected using standard microbiology procedures. Results: In bottled water, total dissolved salts (TDS), Ca, Cl, and Mg were within acceptable ranges, like that in tap water, the mentioned parameters were within normal ranges except for regions Aborwayah, Al-wend, Al-khayrat and Al-husainia which were beyond the expected value. In terms of bacteriological tests, coliform bacteria were found in bottled water (Al-katara water and Al kafeel) samples with no E. coli bacteria. In the case of tap water samples, the findings revealed that most of the regions (9 out of 12 = 75%) had coliform bacteria growth, so (4 out of 9 = 44. 4%) had E. coli bacterium growth does not comply with the approved standards for drinking water, which must be free of the microbial content of E. .coli and coliform. Conclusion: According to the study, drinking water treatment operations are not up to par, particularly in locations outside of the city center, and bottled water is preferable to tap water for drinking.
Keywords. drink water, coliform, TDS, Chloride, turbidity.
INTRODUCTION
Water is a significant natural resource globally, and sustaining human life is the essential thing on earth 1. The physicochemical characteristics of water are often a crucial factor in determining and assessing the quality of drinking water. Various chemical and physical criteria may be used in the evaluation of water quality. Several guidelines were formulated to individually test the chemical and physical parameters of the quality of drinking water (World Health Organization, 2004 2. Transmitted by disease-causing microbes via drinking water is primarily of fecal origin, and they are recognized as enteric pathogens 3,4. The World Health Organization (WHO) criteria indicate that no drinking water should contain any microorganism considered to be pathogenic or some other microorganism fecal pollution-indicative bacteria 5.
Approximately 250 thousand people die every day worldwide due to diseases (typhoid, cholera, etc.) caused by unsafe water use, according to WHO (2006) evidence. Problems with water supplies have been one of the most critical concerns throughout human life 6. As a result of poor treatment and disposal of waste, industrial discharge and overuse of limited water resources, pollutants such as bacteria, viruses, heavy metals, nitrates and salt have made their way into water supplies 6. Working in close cooperation with the Government of Iraq for many years, WHO and UNICEF have been profoundly concerned about this situation. They are keen to provide assistance to improve the health status of the general population and minimize morbidity and mortality through activities aimed at protecting and promoting the quality and protection of the supply of water 2. To ensure that water supplied to customers is well regulated and follows national standards and WHO guidelines on drinking water quality, an expanded network of water quality control laboratories has been established. The study aims to analyze and compare the quality of drinking water in the areas studied in Karbala city.
MATERIALS AND METHODS
Sample Collection
Eighteen water samples were collected from different places in Karbala governorate from November 2020 up to September 2021, where sex samples of bottled water distributed the samples and twelve samples of tap water, and regions numbered from 1 to 18 as in table (1). 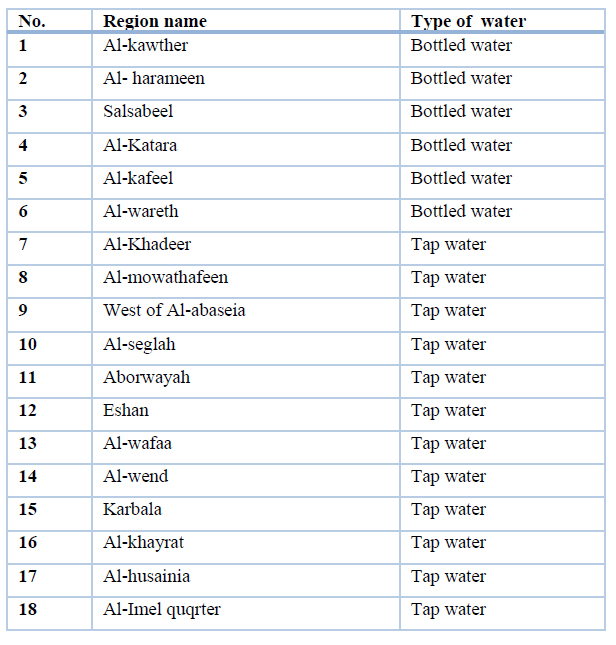 Table 1. Numbering of regions involved in the study
The samples were collected in germ-free plastic bottles, taken to the laboratory and analyzed directly.
Chemical analysis
A turbid meter device HACH 2001N was used to measure the turbidity of the water. In addition, total dissolved salts (TDS) were estimated using the inolab-cond 7110 devices and the pH of the water using a pH meter. The chloride, magnesium, and calcium concentrations were determined using the titration method.
Bacteriological analysis
Many culture media were used for isolation of bacteria such as nutrient agar (Oxoid) for total aerobic bacterial count, MacConkey agar (Himedia) for coliform count and brain-heart infusion agar (Himedia) for fecal streptococci count. These media were sterilized in an autoclave at 121 C0 for fifteen minutes. Samples were appear growth at tubes of multiple fermentation tube technique cultured on the prepared medium in duplicate and incubated aerobically at 37 C0 for TBC and TC. The colonies were counted and expressed as colony-forming unit's per100 milliliter (CFU/100ml) of the samples as described by APHA (1998). The presence of these bacteria was expressed in the results table with the presence or absence (+/-). Various biochemical tests were carried out for bacterial identification; in addition, the diagnosis of E. coli was confirmed by the VITEK-2 technique.
RESULTS AND DISCUSSION
The chemical analysis results of some biochemical parameters of drinking water (Table 2) show normal ranges for all parameters with the mean values. A high turbidity value appeared in Al-kawther region (4.9) and a lower reading at Al-kafeel region (2); these results reach the acceptance of Iraqi limits specification (417) 7 and the WHO guidelines for drinking-water quality 2. also, the results have come in contact with other Iraqi researches 1, 6, 8 in Baghdad, Erbil and Hilla respectively. TDS shows a common mean value and recordings in all regions with a high record at (247) and low at Al-Katara (38), also, the result was acceptable in Iraqi limits specification and WHO 2,7 and  1,6,8. The normal pH range for drinking water is between 6.5 – 8.5; the measurement of pH was normal in all regions except for the region that appeared highly alkaline with a pH 8.5 in salsabeel sample, and the lower pH was in Al-Katara (6.6) which appeared near to results of researches in Baghdad, Erbil, Diwanyia and Al-Kut  1, 3, 4, 8. Chloride (Cl) is added as a disinfectant to water which leads to the formation of acids 8; the purpose is to kill pathogens causing disease, such as bacteria, viruses, and protozoans, that commonly grow in water supply reservoirs 10, with a high level in salsabeel (71 mg/l) and the lower level was in Al-Katara (14 mg/l), all of these are within normal level according to Iraqi limits specification (417) 7 and the WHO guidelines for drinking-water quality 2, and agree with many studies  1, 6, 8 in Iraq. Ca++ and Mg ions are also within acceptable and safe levels; the results were agreed with other studies in Iraq, Baghdad 8, 11, 12, Erbil 1, 13.

Table 2. Results of chemical analysis of bottled drinking water (RO) samples in different Karbala regions
Table (3) shows the presence of bacterial contamination in drinking water. Only two regions (Al-Katara and Al-kafeel) found bacterial coliform contamination over the zero average counts, and all samples were negative for E. coli. These results found agreement with other Iraqi studies 8   in Baghdad, Mosul 14 and Hilla 6. 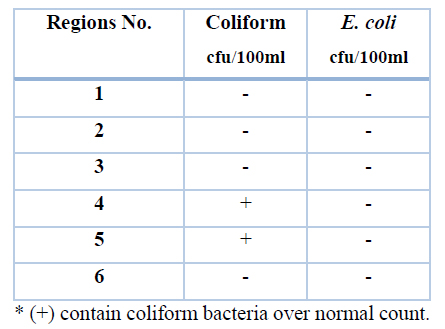 Table 3. Results of bacteriological investigation of drinking water samples in different Karbala regions
The study also investigated the tap water for chemical constituent and bacterial contamination, as shown in tables (4 and 5) in which there was a high variation in chemicals level and coliform bacteria contamination with or without the presence of E. coli. The turbidity index shows a standard value except in region 1 (5), and the results disagreed with a study in Baghdad that found that some regions were above (60) 15. All regions were at the threshold of TDS, and three of them were above (1000), which appear near the same study results in Baghdad. The primary sources of high TDS in river water may result from agricultural runoff, soil erosion, house waste, and other human activities 18. The other parameters show an undulation between normality and abnormality; the pH was within normal standardized but tended to alkalinity with a mean value (8.3). The calcium also appeared normal in all regions, Mg was above stander measurement in three regions (7, 11 and 17), and the Ca++ showed normality. These parameters converge with that study in Baghdad 15. 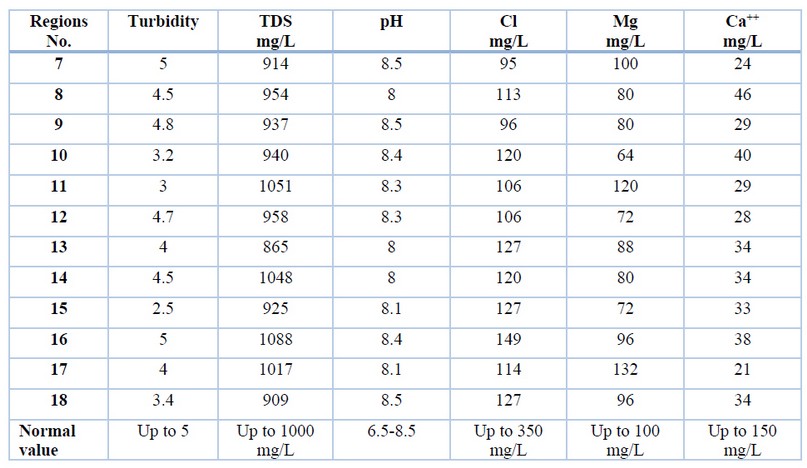 Table 4. Results of chemical analysis of tap water samples in different Karbala regions
The bacterial analysis of tap water shows a diversity of contamination with coliform bacteria in several regions, and only three regions (7, 15 and 18) give negative culturing of coliform bacteria. This indicates poor water sanitation in Karbala in general; these results also agree with other Iraq studies 6, 8, 14, 16, and 17. At the same time, E. coli culturing on EMB media shows a negative in all regions except ( 11, 14, 16 and 17), a positive culture for E. coli isolation from these regions as in table (5). Coliform bacteria are sources of human and animal excreta pollution in water. Fecally contaminated water contains harmful pathogens, and so it is not safe in use by human daily works 19. Also, the high bacterial count was due to old piped city projects or inefficient filtration and precipitation process 20, the chlorination time during sterilization was not enough 21.