×
Go to content
Bionatura Conference Series Vol 2. No 1. 2019
“Breaking Paradigms: Towards a Multi-, Inter- and Transdisciplinary Science” In commemoration of the 250th Anniversary of Alexander von Humboldt
REVISION/REVIEW
Previos / Index / Next
Anti-angiogenesis therapy for the treatment ovarian cancer

Alejandra Cevallos and Abigail Solórzano
available in: http://dx.doi.org/10.21931/RB/CS/2019.02.01.26
ABSTRACT
The process of angiogenesis is regulated by several growth factors, the most important factor is VEGF which is an important mediator because it facilitates the growth of blood vessels and the remodeling processes. In addition, angiogenesis is significantly involved in tumor progression giving the tumor the necessary supplies for its survival and thus causing metastases in other organs by providing a site of entry to the circulation of vessels blood. The objective of this review is to reflect the fundamental role that angiogenesis has in the development and spread of cancer through vascular endothelial growth factor, its receptors, and its signaling pathways. On the other hand, antiangiogenics strategies (angiogenesis inhibitors) are proposed to fight cancer and clinical trials are presented to verify the survival range of patients who have been treated with anti-angiogenic therapy.
Keywords: Angiogenesis, anti-angiogenesis, VEGF, inhibitors, cancer
INTRODUCTION
Angiogenesis is the formation of new blood vessels from other pre-existing ones. It is a process that is already inhibited when the human being reaches its adult stage, however, it can be activated in response to a physiological process or by a tissue damage, for example, in wound healing.1 It was demonstrated that there are different molecules involved in the positive regulation of angiogenesis, including the vascular endothelial growth factor. VEGF is a homodimeric glycoprotein with specific mitogenic action of endothelial cells, it is the main molecule in the intervention of neovascularization. So far, it have identified three high affinity receptors for this factor: VEGF-R1 or Fit-1, VEGF-R2 or FLK-1/KDR and VEGF-RB, which are receptors of tyrosine kinases.2 Therefore, VEGF is an important mediator in angiogenesis, as it facilitates the growth of blood vessels and remodeling processes.3 On the other hand, angiogenesis was identified as an important process in cancer growth. Angiogenesis does not participate in carcinogenesis, but if it promotes tumor progression, it provides the oxygen supply tumor and nutrients necessary for the tumor to grow 4 and may cause metastases in other organs.
In the last years years, a challenge in medicine has been to find pharmaceutical agents that make tumor cells more sensitive to chemotherapy, avoiding the creation of toxic effects in the organism.5 For this, several clinical trials were carried out by putting to testing anti-angiogenic drugs, developed through the study of the molecules involved in antiangiogenesis. Then they different ways of inhibiting angiogenesis have been distinguished, it has been demonstrated that agents that attack the VEGF molecule can inhibit neovasculature.
We will know about two types of drugs or molecules that have helped to reduce or prevent metastasis in ovarian cancer. The first is a monoclonal antibody that is responsible for interrupting the binding between VEGF and its receptor and the second is a recently found tyrosine kinase inhibitor. It was evaluated its efficacy through the study of one clinical trials, administering and evaluating its progress after consuming the drug.
ANGIOGENESIS

According to Martínez, J y Herrera, L  2 : Angiogenesis is carried out mainly by the following steps: (1) The endothelial cells (ECs) precursors give origin to the blood vessels; (2) ECs are assembled forming a primitive vascular maze of small capillaries; (3) The vascular plexus expands progressively due to the birth of the vessels; (4) which is remodeling forming a highly organized vascular network of large vessels branching into small vessels; (5) The newly formed channels by ECs are covered by pericytes and smooth muscle cells, which regulate the contraction and dilatation of the blood vessels, providing resistance and allowing the regulation of the perfusion of the vessels.2
Angiogenesis can be physiological (normal) or pathological (abnormal); The physiological is produced in the healing of the wounds and in the reproductive cycle female, and the pathological one appears when it reaches the limit or exceeds the limit between the activating and inhibiting molecules, and takes place during the tumor growth, rheumatoid arthritis and diabetic retinopathy proliferative.2,6

Figure 1. Process of angiogenesis
ANGIOGENESIS IN CANCER
Tumor angiogenesis is the proliferation of a group of new blood vessels that penetrate into the inside of the tumor, providing oxygen and nutrients. This occurs because the tumor and host cells unload chemicals near the tumor. The process of angiogenesis is regulated by activating and inhibiting molecules.7
In normal conditions predominates the inhibition. And when the need for a new vascularization is presented, the activators of the angiogenesis increase and the inhibitors decrease.
This causes the secretion of molecules by part of the tumor that send signals to the surrounding healthy tissue. This signal activates certain genes of the host tissue, which causes the stimulation of proteins for the growth of new blood vessels. These new vessels are neither functional nor morphologically normal. These vessels are weak, blind and their flow is inverted and discontinuous.7
As a result, although there is an increase in vascularization, the intake of oxygen and drugs is scarcer than in healthy tissue. This contributes to the genetic selection of tumor cells and the resistance to drugs and radiation.7 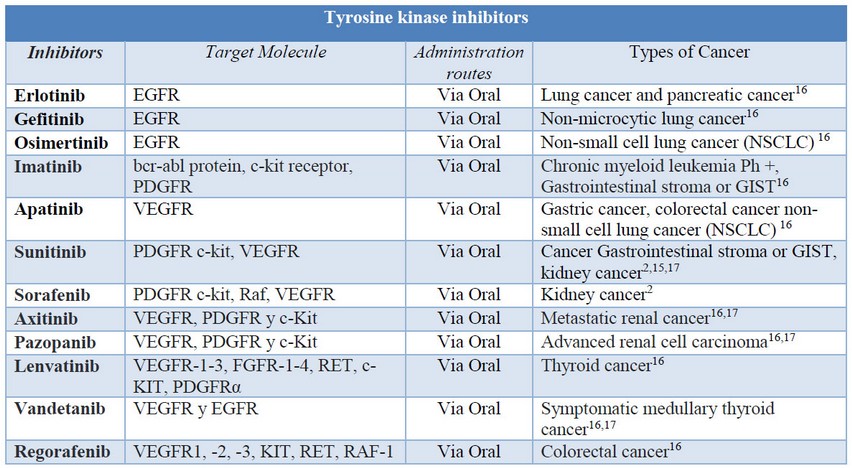